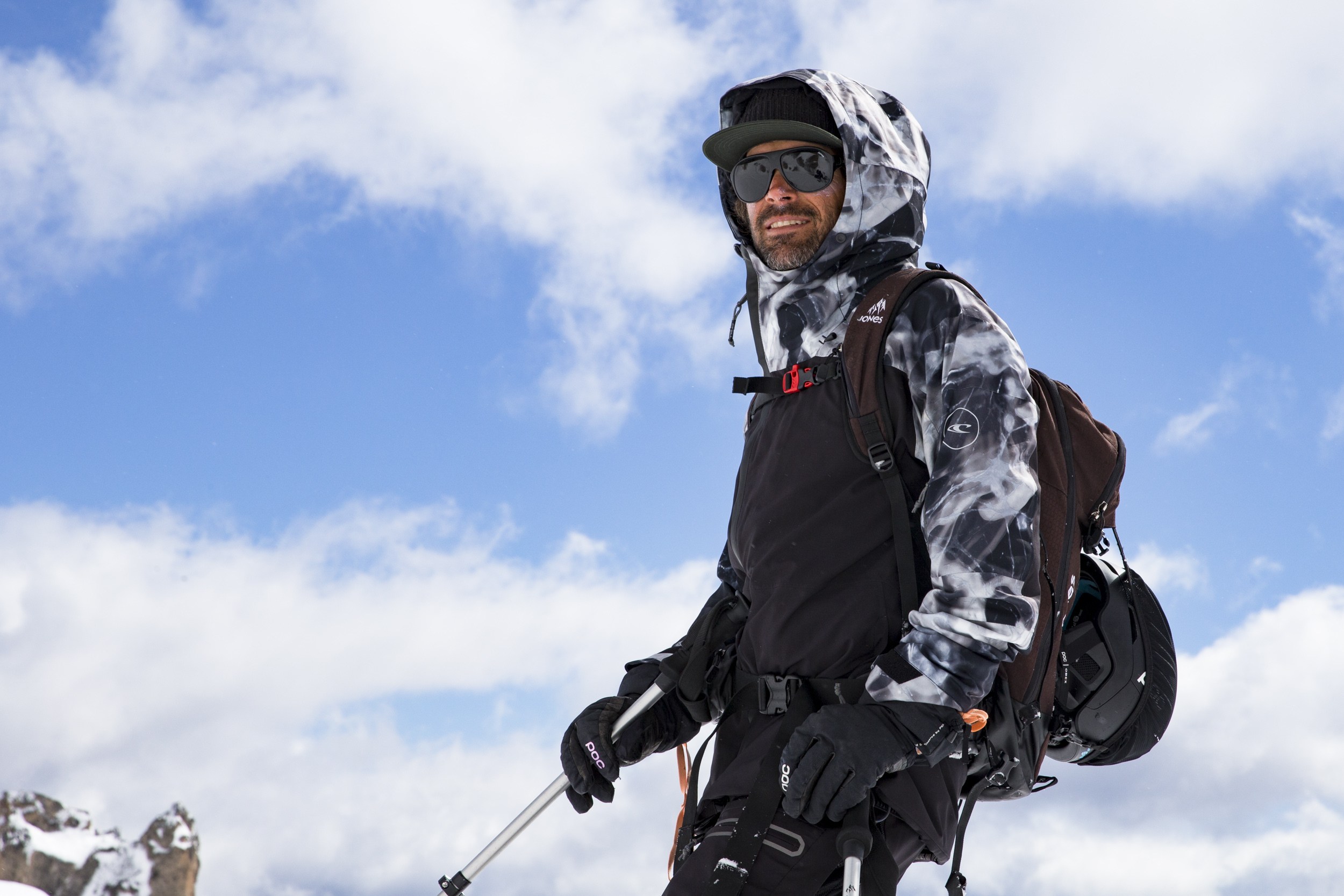 In his new movie, Purple Mountains, pro snowboarder and environmentalist Jeremy Jones travels to the crucial swing state of Nevada to discuss climate change and policy with outdoor enthusiasts on the other side of the political aisle. This effort to forge common ground on shared interests is part of Protect Our Winter’s drive to unify the 50 million Americans who recreate outdoors—the Outdoor State—around a vote for climate action this November.

Purple Mountains, which premiered September 16, 2020, highlights some of the primary factors that have inhibited bipartisan climate legislation, and demonstrates that while the American public might not be as divided on this issue as some would have you believe, significant hurdles remain between our current position and an actionable climate solution. We caught up with Jeremy to discuss those snags and solutions for moving past them. – Mike Goodwin

The goal of Purple Mountains and POW’s Outdoor State campaign is to build consensus among the outdoor community around climate policy, outside of partisan politics, and forge a united path forward. What makes you hopeful about this prospect?
At Protect Our Winters we recognize that there are 50 million Americans that are passionate, outdoors people, who traditionally haven’t been the best voters. So we’re really trying to invigorate this community to get out the vote, and get out the vote for clean water, clean air, and a healthy planet.

In the film, you note that we no longer come together as a society to solve key issues, that we’ve stopped talking to each other. Do you see this lack of honest communication as a primary obstacle?
I think that the goal of these big players, the big industries—pick any of these issues—is to really divide us. They do not like common ground. They don’t like discussions. Through social media platforms they’ve learned that you’re going to get people to click more if they’re angry. We’re living in this experiment right now where there’s been such a transition, with cell phones putting computers in our pocket, and so much happening on that front. But at the end of the day, the result is that we are not communicating. It does not seem like we’re communicating with people with different views, which is never a healthy thing. Not only are we not communicating, we’re setting up these social fences with people with different perspectives.

A problem in connecting with many on the right, or center right, regarding climate change seems to be difficulty un-coupling climate change from any real or perceived “liberal agenda.” Is there currently any bipartisan legislation that you are advocating that would alleviate this concern for such voters?
If you’re spending a lot of time in the mountains, even in these rural, really red districts, the people there are actually not arguing that climate change is happening. But because of ideologies, there’s just no way they’re going cross the aisle to vote for the environment, because with that they’d have to support a bunch of things they don’t want to support.

We’ve always recognized that at Protect Our Winters. We are a bipartisan group. Sadly, to vote for the environment right now, you have one option. You’re picking one team. That’s why we’re struggling so hard as a country, and I point out that it’s not by chance. That’s the ultimate goal for, say, the fossil fuel industry—to get the climate into ideology politics. Because that’s when your issue really becomes strong and people become cemented into their views. We keep hoping that a vote for the environment means you have two options, and right now you don’t.

Have you met any conservative lawmakers either during the production of this film or during your time in Washington who seem genuinely willing to work on this sort of legislation?
Well, it’s really behind closed doors that we see some change in them, basically being like, “Get me a bill that I won’t get crushed on politically.” But the reality is, if you’re a conservative that is taking money from the fossil fuel industry, if you’re taking votes against the fossil fuel industry, they’re going to replace you with someone that will vote in their interests. And until the people rise up and say, “Enough is enough, we need you to act on climate or you’re going to lose your job,” we won’t see the change that we need to see. There’s never been an elected official who lost an election due to their stance on climate. That needs to happen. That is when we will see people get really serious about climate.

How about on the other side? Are there Democratic politicians who grasp the urgency of this issue who you think have made an honest effort to sponsor climate legislation that doesn’t also include other topics or issues likely to derail any chance at bipartisan consensus? Pure climate legislation, if you will?
For a Democrat to vote on a climate bill, that’s not a risky vote for them. The frustration is that we only have say, 50% of our, call it our collective brainpower, looking at solutions. We have the most critical issue facing long term humanity here and half the people aren’t even rolling up their sleeves on it. We’re arguing that climate change is even happening opposed what is the best way to address this issue that we have.

The tough part of the whole thing is we’re on this thirty to forty-year arc to wean ourselves off fossil fuels and embrace clean energy because it’s just smart business. The cheapest form of bringing new energy online is clean energy, and it creates way more jobs. So there’s a ton of optimism in that right there. The problem is instead of being on this thirty to forty-year arc that the market is dictating, we need to be on a ten-year arc. That’s where the frustration comes from. We are in the eleventh hour and there needs to be urgency.

What do you say to people who’d critique that many Democrats posture for green ideals but are simply looking to profiteer in other ways and are not chiefly concerned about the environment?
I think that on the Democratic side, if they aren’t serious about it, they’re probably going to get replaced by someone who is. But that’s getting into district to district stuff. If you look at just about any opportunity to vote for climate action, traditionally Democrats are showing up in droves for that.

You use an Everest analogy in the film, stressing that instead of focusing on how we are going to get to the top and take that final “Hillary Step”—the name of the final climb to Everest’s peak (oh, the irony)—we should instead be focusing on reaching the first base camp. This sort of incrementalism toward issues has become demonized in many circumstances today. How do you think this can be avoided?
We know which way the summit is, and we’ve got to start heading that way. Again, another source of optimism is that, by and large, we have solutions to greatly reduce CO2 emissions. With the climate, there are well-drawn road maps on what we need to do as a society. It’s this enormous mountain we’re trying to climb, and we sure as shit better start putting one foot in front of the other. As we know when we climb mountains, yes, you learn things along the way that alter your course. Not every step is perfect, but we know which way the summit is, and we need to start going that way. 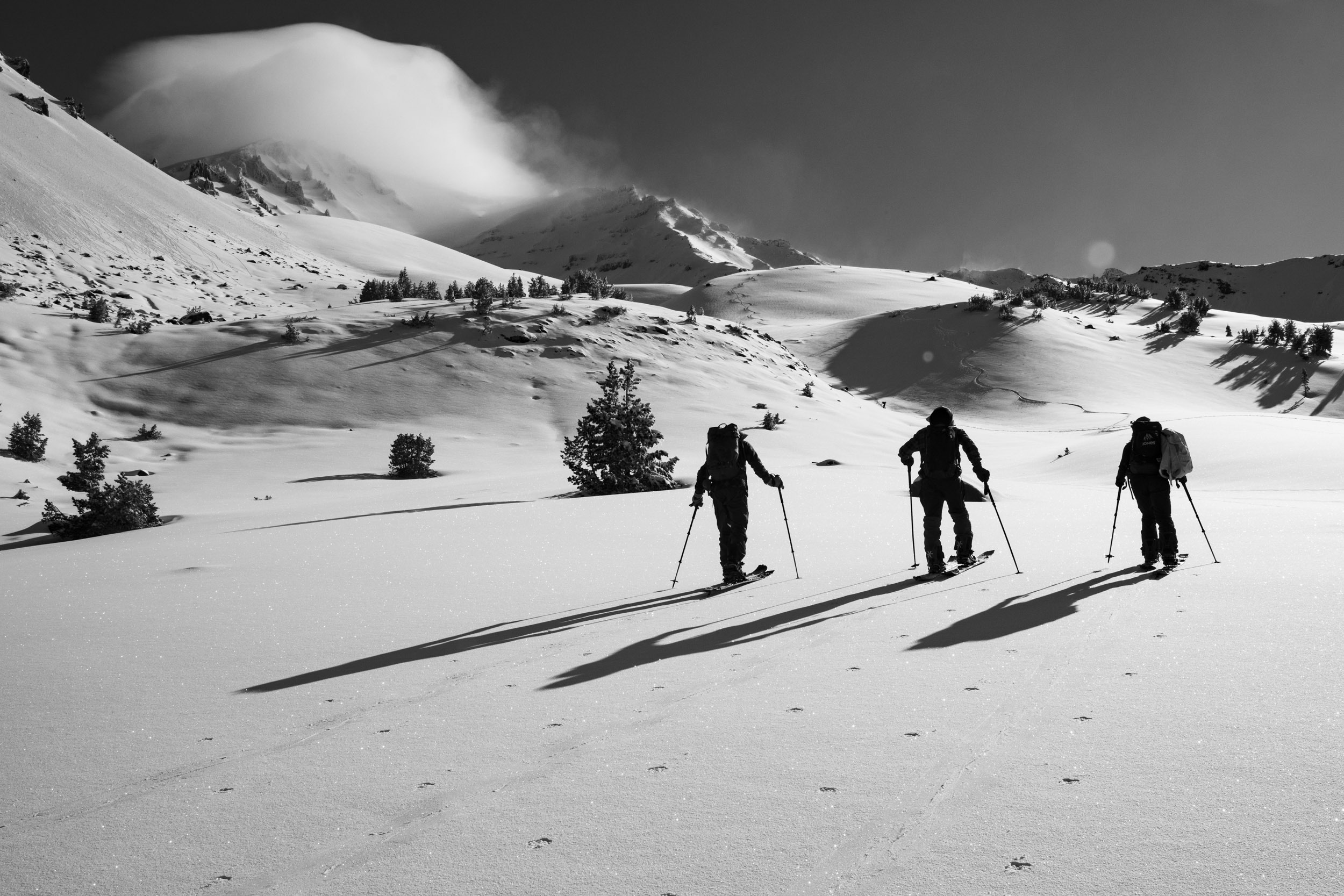 Did you find any daylight or common ground in the conversations for Purple Mountains that you didn’t expect to find, or to a degree that you didn’t expect?
I’d say what caught me off guard the most is that these people are not climate deniers, but they are cemented in their political views for all these ideological reasons. Studies show that 70% of Americans want action on climate, they just disagree on how to get there. I guess the positive thing is that I made some new friends, and we got along great, quite frankly. That was also the frustrating part, because there’s so much we agree on, but they’re clearly not going to vote for a climate champion this election.

Like the hunter, Michael, I hang out with. If you listen to the transcript of that conversation, he really is just like, “Yes, this needs to be protected, and the government’s failing us.” Like two hours of totally [being] on board. He takes the mic off and is like, “You know, I’m still voting for Trump.” I would have loved to have had that conversation with him on camera, on why we’re totally on board on the environment, but yet, without doubt, not even up for discussion, he’s voting for Trump because he doesn’t want someone to take his guns away. Which, nobody is taking his guns away. He has worn a gun every day since he was 18. Open carry. Guns is his number one issue. It just shows you the intricacies and complexities of this stuff. What’s sad is that these people would actually love to vote for a climate champion who’s also, say, a gun champion, and stay in their political party. They just they don’t have an option. There is not someone on the ballot who’s a climate champion for them to vote for, and so they’re going to end up voting for climate deniers, even though they want a healthy planet.

While acknowledging the need for an honest examination of our personal habits and own footprint, how do we move the general climate conversation in snowboarding beyond individual action, with a greater focus on large-scale, systemic change? What sort of action do you recommend snowboarders take?
Definitely becoming part of the political process. Traditionally, 18 to 35-year-olds haven’t been great voters. The Outdoor State is traditionally not great voters. It’s voting and getting your friends to vote. It’s helping local officials that are climate champions get elected because the state, local, and even the public utility district level, really matter. It’s understanding that democracy requires participation, and that democracy is really on trial right now at the federal level. We need more of the youth engaged in the political process. Sadly, quite frankly. I mean, I understand that it’s not the most fun thing to do, but it needs to be done.

If you look at the agenda of the fossil fuel industry, of creating climate deniers, and creating conflict around climate, a clear tactic of theirs is to get people pointing at each other going, “That hamburger that you’re eating is what’s killing us! You’re part of the problem. If you didn’t need that hamburger, we’d have this issue solved.” Or, “You drive the wrong car,” or, “You like to snowmobile.” It’s very counterproductive. We live in a fossil fuel-driven society, and that’s been the goal of the fossil fuel industry. What we need to do is change this fossil fuel society to a clean energy society. That’s why Protect Our Winters is political, because yes, personal choice matters, but to get the CO2 reduction that we need, it’s in this large-scale policy change.