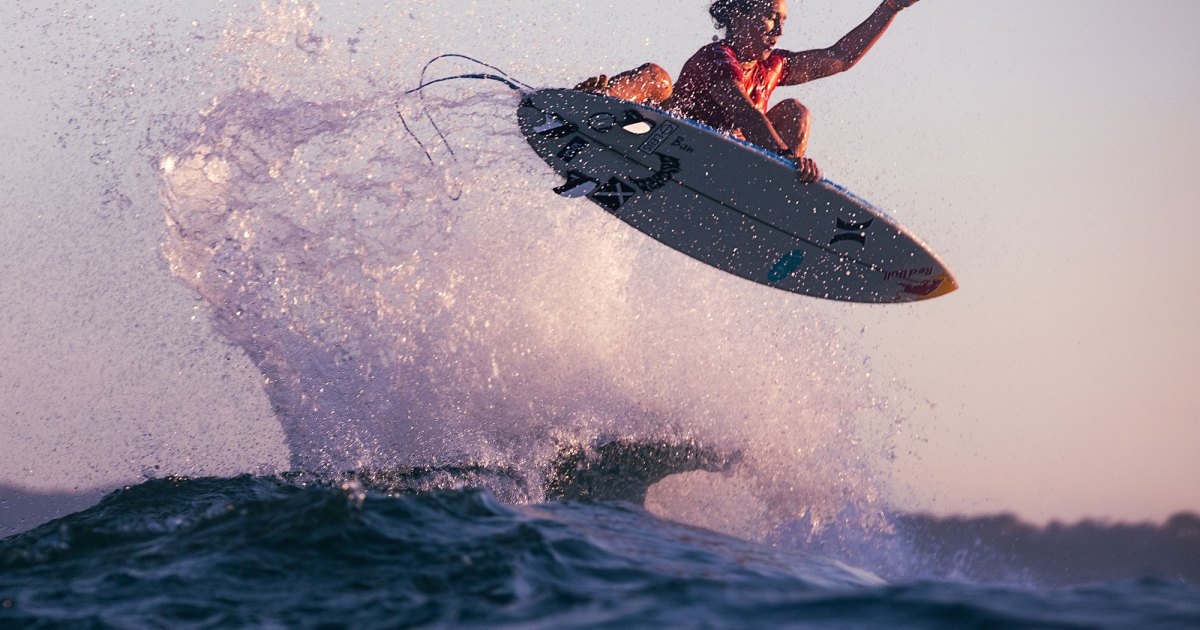 The most show-stopping moment of yesterday’s run of rounds at the Rip Curl Newcastle cup went down at the 1-hour, 40-minute, 45-second mark above. During the head-to-head quarterfinal heat between Carissa Moore and Johanne Defay, the 4x World Champ landed quite possibly the best air reverse of her life–and set the surfy internet ablaze in the process. How and why the maneuver didn’t earn her a perfect-10 is beyond us.

Hit play above to watch Riss punt into the stratosphere and continue reading below for the WSL’s breakdown of the day’s highlights:

The Rip Curl Newcastle Cup presented by Corona will now await Finals Day after big eliminations through the men’s Round of 16 and the women’s Quarterfinals. There was no shortage of action today for the second stop on the World Surf League (WSL) 2021 Championship Tour (CT) with the men’s Quarterfinalists and women’s Semifinalists decided for a potential Finals Day tomorrow.

Carissa Moore (HAW), four-time WSL Champion, pushed the progression of surfing another level higher today by landing a massive air reverse. The feat earned her the highest single-wave score of the event so far, a near-perfect 9.90 (out of a possible 10).

Moore was under pressure with her opponent Johanne Defay (FRA) in complete control of the heat until Moore took off on a medium set and went off the lip and into an air-reverse, possibly the biggest landed by a female in competition. Moore was almost shocked when she landed and is eager to continue to innovate her surfing throughout the road to the Rip Curl WSL Finals.

“You have to keep reinventing yourself when you’re amongst this field,” Moore said. “All of these girls are so good and constantly pushing the level of surfing. I never land those things let alone in a 30-minute heat. The waves are so incredible out there right now. I’m so glad WSL waited for the tide. There is so much on offer — turns, barrels, airs — there is just so much opportunity. I’m just so excited at the moment, I can’t believe it.”

CT rookie Isabella Nichols (AUS) upset the competition today with a big win over seven-time WSL Champion Stephanie Gilmore (AUS) in the opening heat of the women’s Quarterfinals. Nichols got to work early in a slow heat, securing a 6.67 (out of a possible 10) and 7.23, to Gilmore’s 5.40 and 6.00. Gilmore was unable to overcome the freshman in the 30-minute heat and exits in equal 5th place. Nichols has now secured her career-best result and will hope to continue her success when she matches up with fellow Sunshine Coaster Keely Andrew (AUS) in the Semifinals.

“I’m pretty speechless at the moment, to be honest,” Nichols said. “Steph (Gilmore) is my idol, she always was and always will be someone I look up to so to have a heat against her was pretty surreal. When I saw we were matching up, I was pretty stoked but that’s not how I thought that heat was going to go, but I’ll take it. Having that heat was so special and the outcome was just a bonus.”

“Isabella (Nichols) is a rookie who is on fire at the moment,” Gilmore said. “I watched her grow up on the Gold Coast and have seen her improve so much. It wasn’t my afternoon though. I was letting waves go that I should have gone on and just had poor wave choice. It’s such a nice afternoon though, it’s really fun out there, the waves are awesome with good conditions. It was a bummer to go down.”
Caroline Marks, Keely Andrew Secure Spots in Semifinals

After disappointing finishes at the first CT event, Caroline Marks (USA) and Keely Andrew (AUS) have come back stronger than ever with entries to the Semifinals.

Marks dominated her heat against Bronte Macaulay (AUS) in the final Quarterfinal matchup. 19-year-old Marks will now come up against her fellow Olympic qualifier Moore in Semifinal 2.

Local favorites Morgan Cibilic (AUS) and Ryan Callinan (AUS) continued their epic run of form, each booking themselves a spot in the Quarterfinals. Now, the two will battle each other for a spot in Semifinals at their home break. For CT Rookie Cibilic, he’s already guaranteed his best CT result, but Callinan has the opportunity to claim his maiden CT victory in front of a hometown crowd. Callinan booked his spot in the Quarterfinals at the expense of title hopeful Owen Wright (AUS), while Cibilic took down compatriot Wade Carmichael.

“It feels a bit overwhelming,” Callinan said. “With all of my friends and family down here on the beach, every heat win [feels like] you’re winning the final, which is exciting but I’m just trying to have fun while keeping it contained. Owen is one of my favorite surfers so to have a heat with him is nerve-racking but a challenge that excites me. He’s definitely one of my heroes. It’s going to be cool coming up against Morgan (Cibilic) but I can already feel the nerves. I just can’t wait to see the local community down here cheering for us and at least whoever wins will be one step closer to taking out the event, which would be so cool for Merewether.”

Reigning WSL World Champion Italo Ferreira (BRA) showed why is considered one of the world’s most exciting surfers as he took to the air over the heaving Merewether shorebreak. Ferreira posted an impressive 16.93 two-wave total (out of a possible 20), dispatching Californian Griffin Colapinto (USA). The Brazilian performed a number of huge full-rotation air reverses much to the delight of the crowds who lined the beach.

“That was a good heat,” Ferreira said. “Griffin (Colapinto) started well so I knew I needed to put up a high score and I did. I love a challenge like that. It makes things more exciting. I’ve been surfing on an epoxy board which has been working well for me. I find I can get much better speed in these waves on a board like this so I’m happy with it.”
Joining Ferreira in the Quarterfinals will be fellow WSL Champions Gabriel Medina (BRA) and Adriano de Souza (BRA). Medina and De Souza, the first two Brazilian World Champions, will go head-to-head in the first heat of the Quarterfinals.

In today’s live broadcast, three-time WSL Champion Mick Fanning called in to announce that he will be the event wildcard for the upcoming Rip Curl Narrabeen Classic pres. by Corona.

“I don’t think I’ll feel bad,” said Fanning. “The amount of wildcards that ruined my dreams over the years, they didn’t feel bad. The biggest hurdle is actually getting ready to compete at a level that I think is right there to try and take people out.”