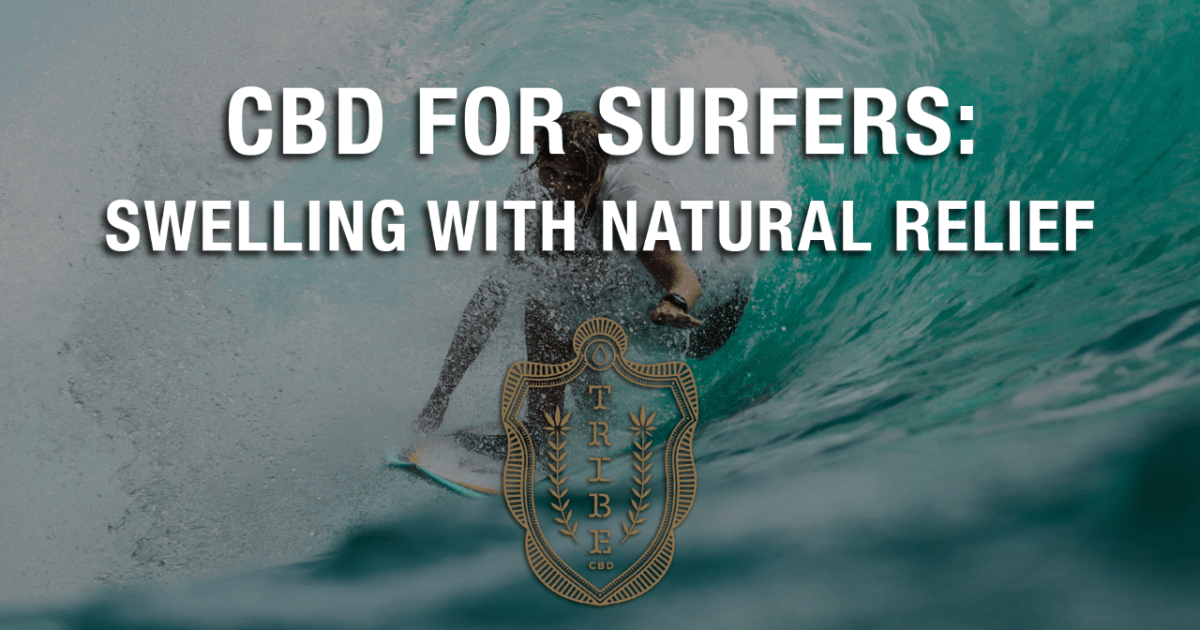 Over the past few years, CBD has emerged as a vital supplement for many surfers and their grueling athletic routines. For athletes professional and amateur alike, cannabidiol serves as a great natural alternative for ailments or injuries. For surfers in particular, used to ripping on the world’s powerful and biggest waves, CBD is the perfect option for aiding in muscle recovery, inflammation, stress and even sleep.

What is CBD? Where did it come from?

CBD, also known as cannabidiol, is one of many compounds found in hemp plants. Unlike its counterpart THC, CBD does not have prevalent psychoactive properties, but rather promotes a whole wealth of other potentially therapeutic effects on the brain and the body. CBD works by targeting receptors in the human body’s endocannabinoid system. The ECS works largely to regulate functions such as pain, sleep and mood.

CBD has been used in medicine for thousands of years, being a staple in natural medicine practices like Chinese and Indian medicine. However, it wasn’t until the latter half of the 20th century that CBD was isolated from other compounds found in hemp and cannabis plants, for standalone use and benefits.

That being said, there are over 120 compounds that naturally occur in cannabis and hemp plants, meaning CBD has many cannabinoid cousins apart from just THC. All of these cannabinoids have a different interaction and impact on the ECS, so when more cannabinoids are taken in conjunction, their effect could be heightened.

Though CBD may be one of the most widely known cannabinoids from a wellness standpoint, it can benefit from the support of other cannabinoids. By combining the use of other cannabinoids with cannabidiol (CBD), the performance and interaction with the ECS could be positively increased. This theory is referred to as the ‘entourage effect.’ For this reason, many people including athletes, have been turning to broad and full-spectrum CBD products.

The diverse content on a full-spectrum CBD product, containing additional rare cannabinoids, could maximize the effectiveness of CBD in your athletic routine. While CBD interacts with the receptors in the ECS, it does not necessarily bind with them. In contrast, there are many cannabinoids that do bind with receptors. So, when taken in conjunction, other cannabinoids can bind with receptors in the ECS located in both the central and peripheral nervous system, boosting CBD’s interaction with the endocannabinoid system (ECS).

In the years since, CBD has been a force to reckon with in the health and wellness realms. Since the 2018 Farm Bill and the broad legalization in the US, the compound has been found more widely and continues to gain popularity.

As athletes, the body can undergo some serious strain. As far as surfers, the strain can be immense, from the moment you enter the water to the time you stand to ride it out, and even then as the balancing act continues. CBD has strong anti-inflammatory properties, serving as a great tool for muscle soreness and recovery. CBD works directly with your body to block inflammation and pain receptors from over firing. CBD can be a good asset for an injury recovery program, not only for its pain management capabilities but also to regulate stress.

For professional athletes concerned with competitions, CBD is perfect for helping wise the mind. It again works directly with the ECS to deliver an overall feeling of wellness for both mind and body. CBD has also been shown to help with sleep, another great recovery tool for athletes, especially when a full-spectrum product is employed.

In 2017, CBD was removed from the controlled substance list by WADA, which opened the door for athletes concerned over drug testing. CBD, unlike marijuana, is allowed for most athletes to use. That being said, if you are subject to drug testing, be sure you know the CBD product you are using contains no trace amount of THC that could prompt a failure.

Consuming Your CBD as a Surfer

There are a wide variety of CBD products on the market these days. From edibles to oils and just about everything in between, the options are there, but is the quality?

When shopping for a reliable CBD product, it is always important to read and review all label claims. Most CBD products contain less than 0.3% THC, even full-spectrum ones, but the only way to be sure is to check label claims and even look toward third-party testing. Many CBD companies will turn to labs for an independent check on their CBD products potency and purity.

CBD can be consumed sublingually or applied topically. Sublingual consumption is most commonly though the use of a dropper bottle filled with oil or tincture. It can be taken by mouth, allowing it to enter the bloodstream rapidly and its benefits to be felt quickly. CBD gummies and edibles are also consumed orally but typically take longer to become effective. CBD and other cannabinoids can also be found in a capsule form, making adding CBD to your routine as simple as taking you daily vitamin. CBD can also be applied topically, a popular choice for athletes often times combined with sublingual consumption.

If you are a surfer or other athlete looking to experience the potential benefits of CBD, turn to Tribe CBD. Carefully crafted, from cultivation to consumption, Tribe has a variety of products geared specifically to the avid outdoor enthusiast or active lifestyle. From their high quality full-spectrum CBD oil to their all-natural vegan-friendly CBD gummies, this is a company that has got your back while you ride that wave, run that field or grind that rail. Check out Tribe CBD here.