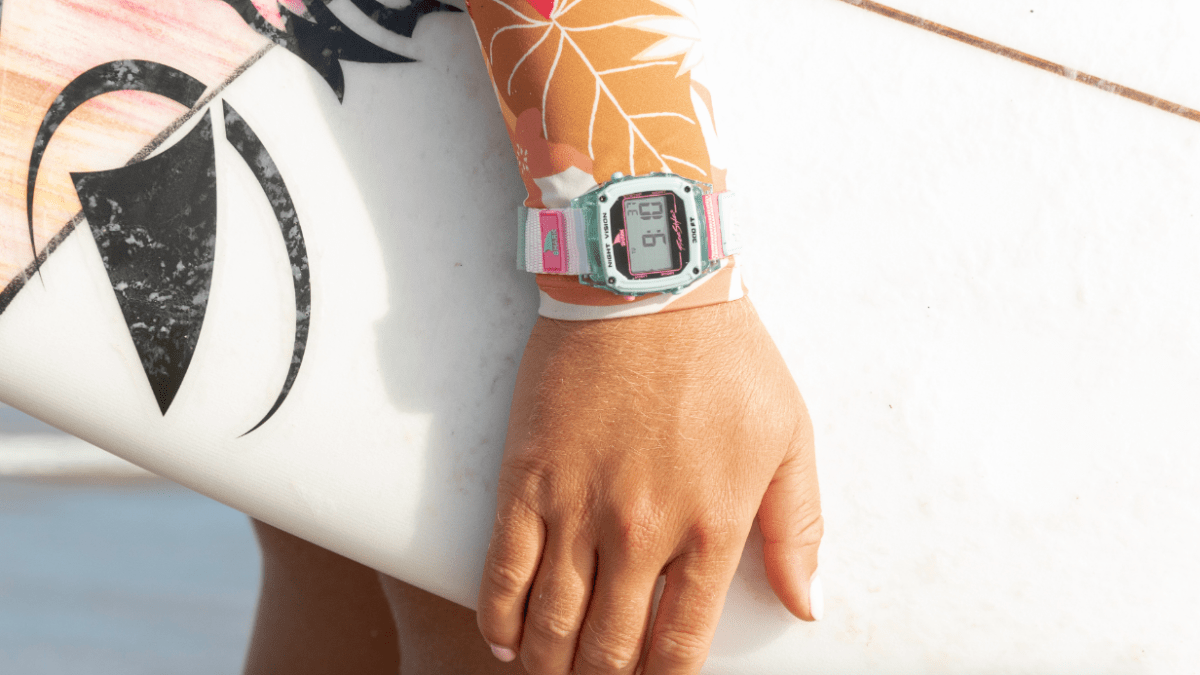 Freestyle’s first signature series watch collaboration with team athlete Caroline Marks is ready to hit the beach! Caroline’s signature Freestyle SHARK Watch: “Clear Blue Sky,” features a transparent sky-blue case with a pale pink and powder blue SHARK Leash strap. This color combination was selected by Caroline as it represents her favorite hues in the sky while riding out at sunrise. As an added detail Caroline’s signature and image have been laser etched on the case back of the watch. Of course, the watch will be loaded with all the performance features you’ve come to expect from the Freestyle Shark Classic watch.  The watch will retail for $65.00 and comes in a specially designed box with a custom waterproof sticker. The new signature series watch will be officially launched on www.freestyleusa.com in late July and will also be available at select retail partners.

“Caroline represents the strength and performance-driven spirit of the Freestyle brand. She is truly an inspiration to her fans and young women everywhere. We are thrilled with this collaboration and look forward to the opportunity to work with Caroline on other exciting designs in the future.” says Jeff Gregg CEO of Freestyle USA.

Caroline Marks, a longtime fan of the brand says “I’m super excited to be releasing my first signature watch. Since day one, Freestyle has always been my favorite watch company. Can’t wait to share this with everyone on July 24th!”

Caroline Marks is without a doubt destined for surfing greatness. At just 18 years old, her naturally powerful style in the water has drawn comparisons to perennial powerhouses Carissa Moore and Mark Occhilupo. With an impressive list of record-breaking accolades under her belt already, the sky is the limit for Caroline. At age 11, she became the youngest surfer ever chosen for the USA National Team.  The following year, she tied Carissa Moore’s record as the youngest NSSA Open Women’s Champion. In 2015 she secured her second NSSA Open Women’s title, earned a pair of NSSA Open and Explorer Girls titles, and became the youngest-ever U.S. Open Champion with the Pro Junior Title. Coming off those impressive feats, she was awarded a wildcard spot in the 2015 Swatch Women’s Pro at Lower Trestles, placing her alongside the women on the World Championship Tour as the youngest wildcard competitor in the history of the World Surf League. She continued her dominance in 2016, taking home her 2nd consecutive Vans US Open Pro Junior title and becoming the first Girls U16 Gold Medalist for Team USA in the history of the ISA World Games. With that feat, she became the first American ISA Gold Medalist of the Olympic Era. In 2017, Caroline made history as the youngest person, male or female, to qualify for the WSL Championship, accomplishing the feat at 15 years young. She then went on to take home the “Rookie of the Year” award in 2018, her first year on tour. 2019 would soon be one she would never forget, as Caroline continued to make history with two Championship Tour Event wins, ultimately finishing the season ranked 2nd in the world and earning a spot on the inaugural US Olympic Surf team. The word prodigy has become synonymous with Caroline Marks. Caroline is one to watch as she makes her mark as the youngest competitor on the Women’s Championship Tour and soon to be the Olympic Games. She is a favored medal contender in Tokyo 2021 where she will look to add Olympic Gold to an already impressive collection of hardware. Inspired by the waves and supported by her tight-knit family, Caroline is showing no signs of slowing down.

The essence of Freestyle is embodied in the youthful freedom found at the nexus of surf, sun, and fun. This colorful, creative, and irreverent intersection of California Beach Culture and Ocean Performance yielded Freestyle Watches, an enduring and iconic brand of water-resistant timepieces epitomized by the iconic Shark Watch. Amplified like a music festival, calculated like the tide, and fun like a day at the beach, Freestyle is the world’s original and most trusted watersports watch. Welcome to our ocean, put your phone in a safe place, and dive in. Freestyle USA is independently owned and operated. For more information, or to request a press kit, please contact Wilson Troche at wilson@freestyleusa.com