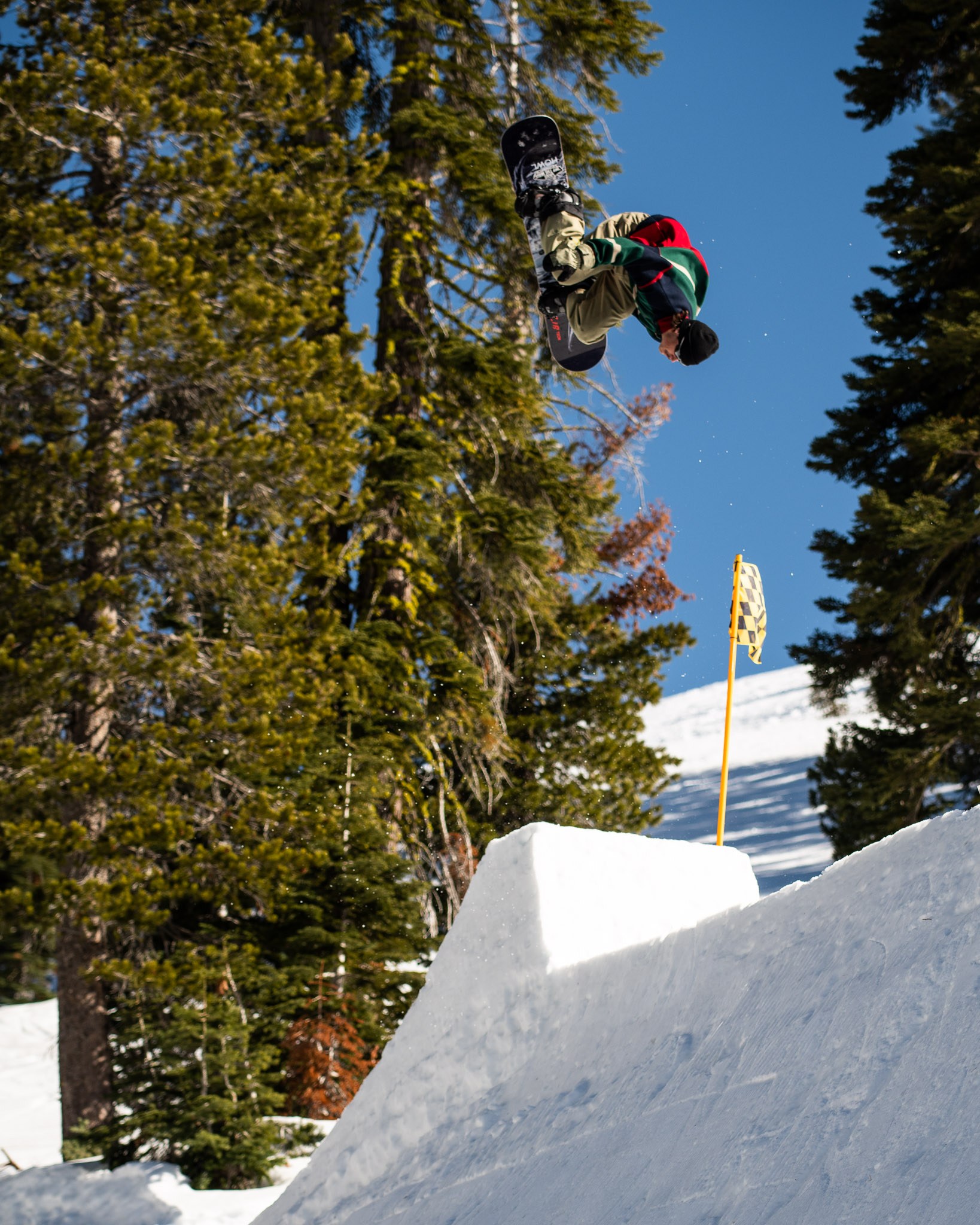 The Lib Tech crew took to Boreal’s Pop-Up Park for some testing of their Total Ripper Series, logging some party laps and R&D before the COVID-19 pandemic crashed the event.

From the Lib Tech desk:
Where were you when the world ended? If you were like us you were stuck under 10 feet of fresh pow in Tahoe with resorts and businesses closing down around you, glued to the news fueling the millions of unknowns running through your head. But let’s back up….a few days. There’s millions of stories from this unprecedented spring (many times more dramatic than this) but here’s ours.

Denver Orr
The plan was to shoot the new C3 TRS aka the Total Ripper Series. The TRS is one of our most storied boards having ushered in countless freestyle and competition bosses over it’s close to double decade run. From team, shop and demo feedback we knew we needed to up the aggression on this board and make it the go to for hard-carving, park-shredding, take-no-prisoners rippers. So we did. Then we made a plan to grab a pack of stone faced freestyle killers and get them in a sweet park to make dreams come true. We were already headed down to Tahoe for a couple Subaru Winterfest stops and then Boreal offered a spot in their pop up park roll out and it was on! 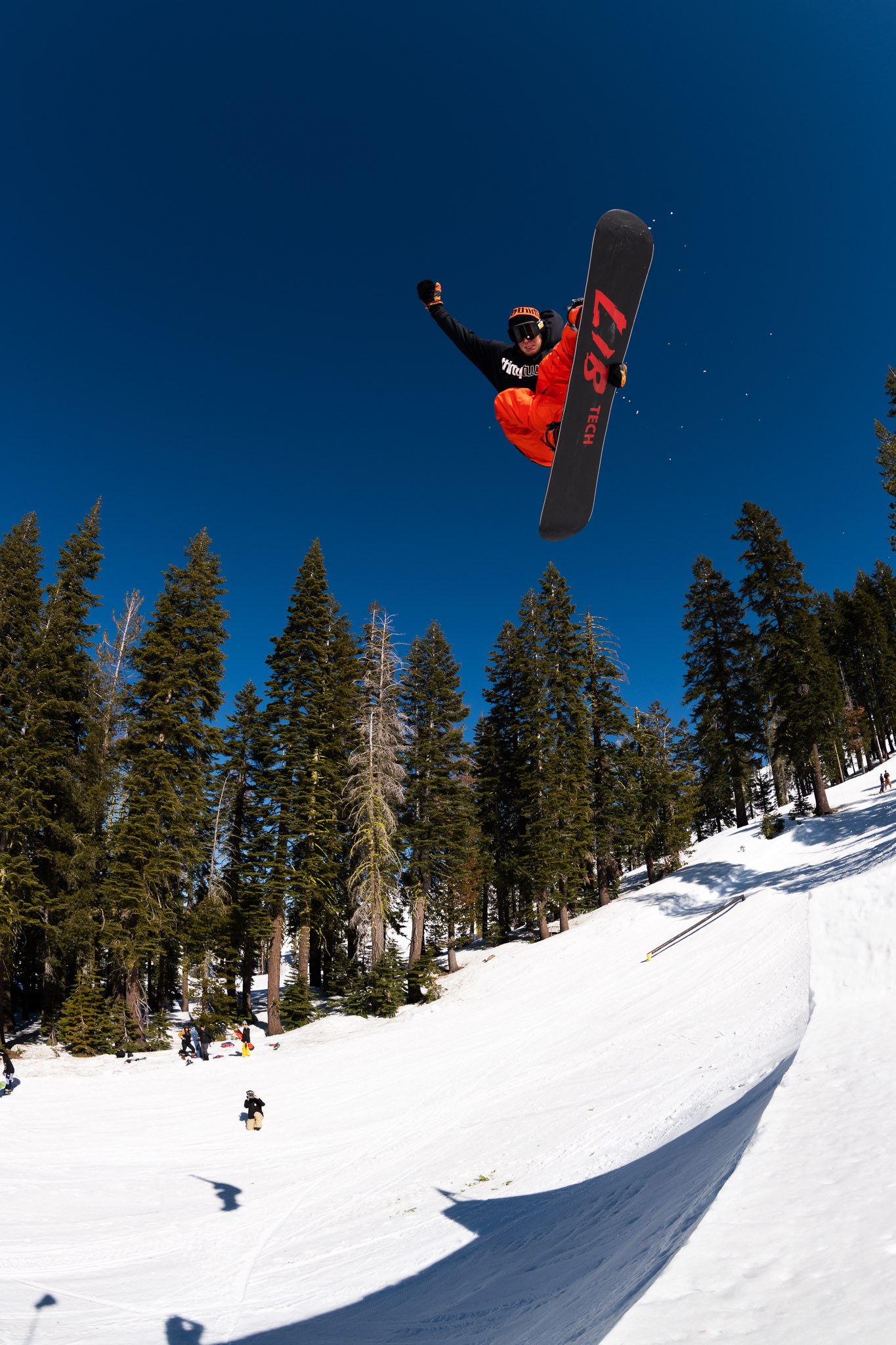 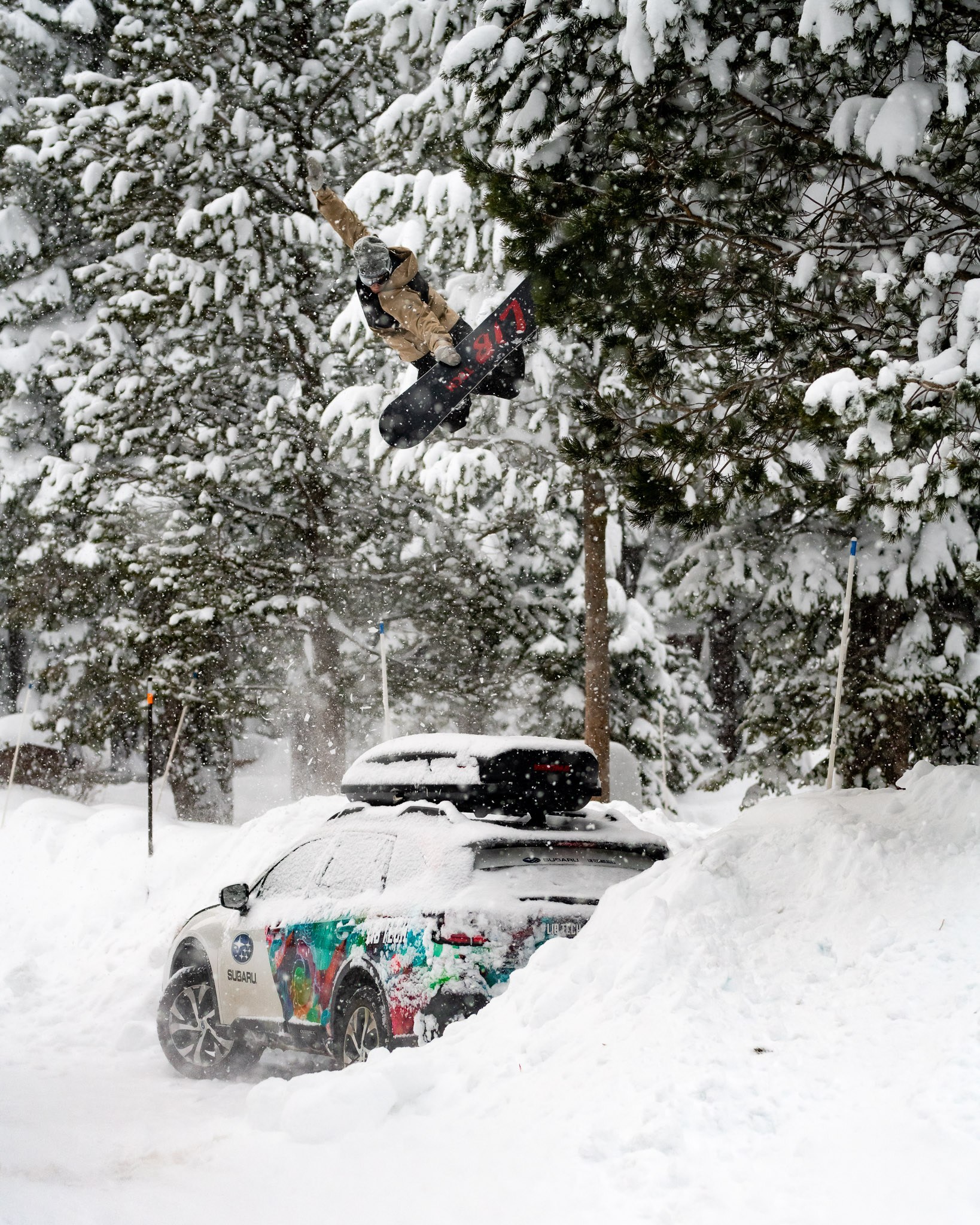 Brandon Reis
Our squad was Brandon Reis, Tucker Andrews, Denver Orr and Phil Hansen with a couple Gnu pop ins from Max Warbington and gap-out guru Al Grogan. The Boreal crew stepped it up again shaping a veritable buffet of scrumptious features for these hungry, hungry rippers. MMMedia crew Zim and Stantech proceeded with the whiplash trying to keep up with a frenzied zombie horde of trick Tyrannosaurs as they feasted on the bones of Jibbasic Park. Reis said, “It was the most productive two days I’d had in a while and was shaping up to be an epic week and half….” But…meanwhile… a bat hooked up with a pangolin in the jungle and set in motion a sequence of biological chain reactions leading to a world-haulting hiccup. COVID-19 had finally made land fall in the USofA completing the ultimate butterfly effect…it was Ashton Kutcher’s fault!!! No, no, it wasn’t Kelso or Demi it was Mother Nature just doing her thing and however it went down it all happened under the sun and is ultimately a reflection of the chaotic mix of biodiversity on our planet and blah blah blah we digress… 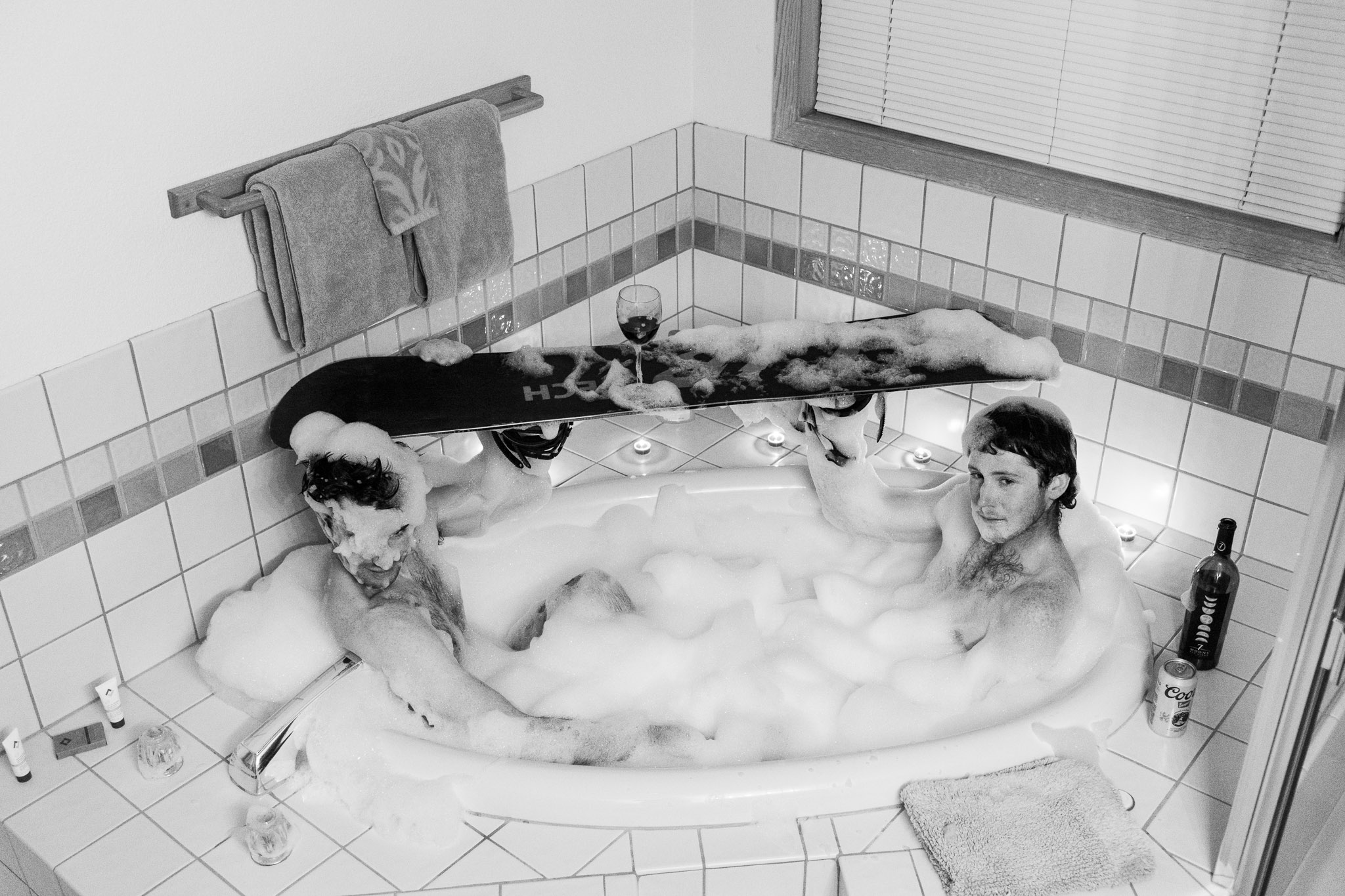 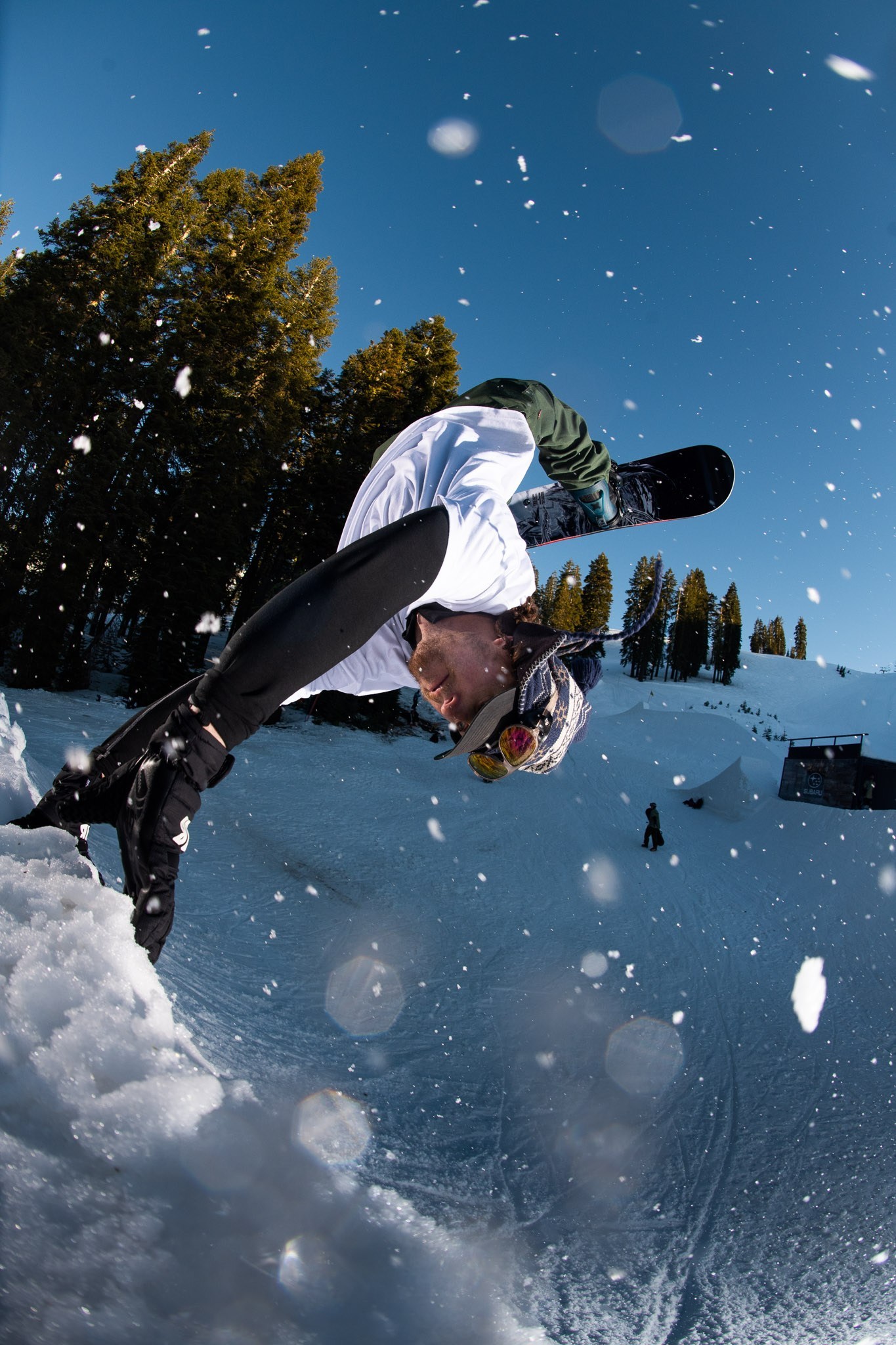 Tucker Andrews
The point is COVID-19 was collapsing the shred season around us like a game of parachute where everyone but you leaves mid inflation and you’re stuck in the middle of the gym with a parachute over your eyes (peaceful and quiet but still stressed about the all-school rope climb test…Digression is an art form.) Mammoth closed, then the Tahoe heavies started dropping one after another and the domino effect was complete when the Subaru Winterfest was cancelled and Boreal called it quits. But this wasn’t enough for Mother Nature, because SHE LOVES IRONY! So she also chucked the storm of the century at us and we were buried alive in Donner with no lifts and a shelter in place order. The crew tried to make the best of it, jumping over the Libaru, jumping off the roof, trying to wade through the woods around Tucker’s house. But ultimately stuck in a cabin with ten feet of snow and barren grocery store shelves they turned to bubble baths and cannibalism… (JK on the cannibalism). We just drove home, and the rest was history.

Special thanks to Matt Peterson, TJ Dawoud and the entire Boreal staff and park crew.

*No Libarus were harmed in the making of this movie.