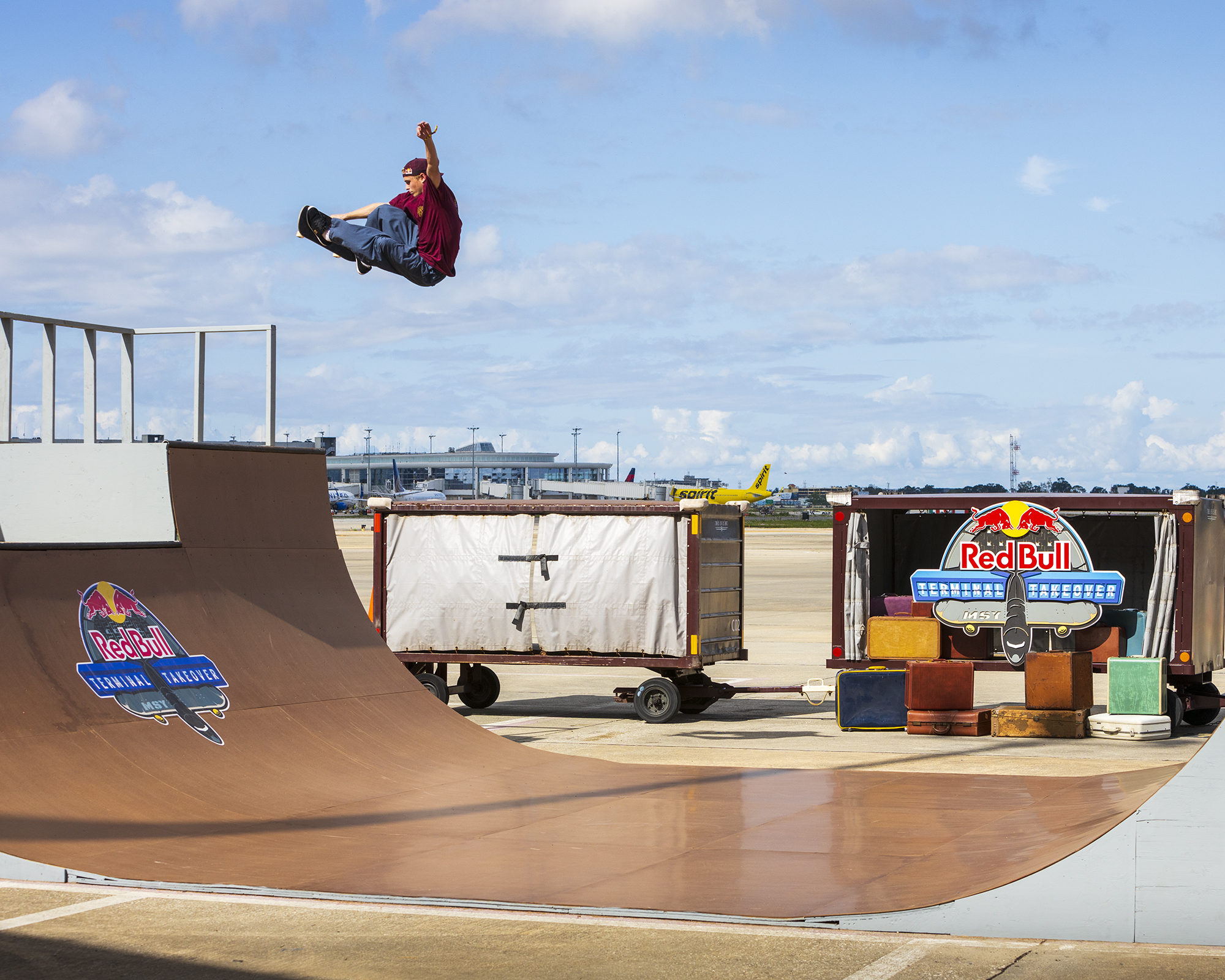 It’s not every day you get the invite to fly to New Orleans to skate and shoot inside of an abandoned airport terminal. As a skater and a photographer, it’s the kind of access you dream of. Everywhere you go, you always see skateable scenarios, but some you just have to chalk up to “No one will ever be able to skate this.” Enter Red Bull and the brilliant idea of renting out the vacant Louis Armstrong Airport Terminal. For the second year in a row, the Terminal Takeover was a reality.

The iconic, cavernous Parabola room that once welcomed starry-eyed travelers to The Big Easy with the trumpeting statue of Louis Armstrong and ornate windows, the luggage claim downstairs, the ticketing room, and the long terminal hallway were all fitted with ramps, quarter pipes, flatbars, ledges, and DIY obstacles that naturally blended with the marbley-smooth airport floor.

Jake Wooten, Alex Sorgente, Shawn Hale, Devin Flynn, Kareem Campbell, Vincent Matheron, and Joey Brezinski had the terminal to themselves for a day before the shop teams showed up. THPS was set up for all to play on a bunch of TVs, and with Kareem actually in the building, it felt like we were living in one of the game’s levels.

Eight skate shop teams and crews from seven different states were also invited to the old MSY Terminal to film their own edits and basically run wild. At the end of the weekend, each team submitted a video edit for a fan-sourced vote. The winning team will receive prize money for their shop/organization of choice.

The crews also got treated to some mouth-watering New Orleans BBQ at night, and a pop-up food shack in the airport with po’ boys, gumbo and Zapp’s chips. At night, we all hit the town, wandering down Bourbon Street for (some of us) our first time, and over to The R Bar to meet up with local Jordan Trahan and our buddy Travis Glover who was down from Atlanta. In the a.m., we had to hit Cafe Du Monde for the famous beignets and chicory coffee. After the Takeover was wrapped, we simply hopped over to the other side of the tarmac and rolled down the actual working jetways to our flights back outta town. Solid time in NOLA, can’t wait to be back!