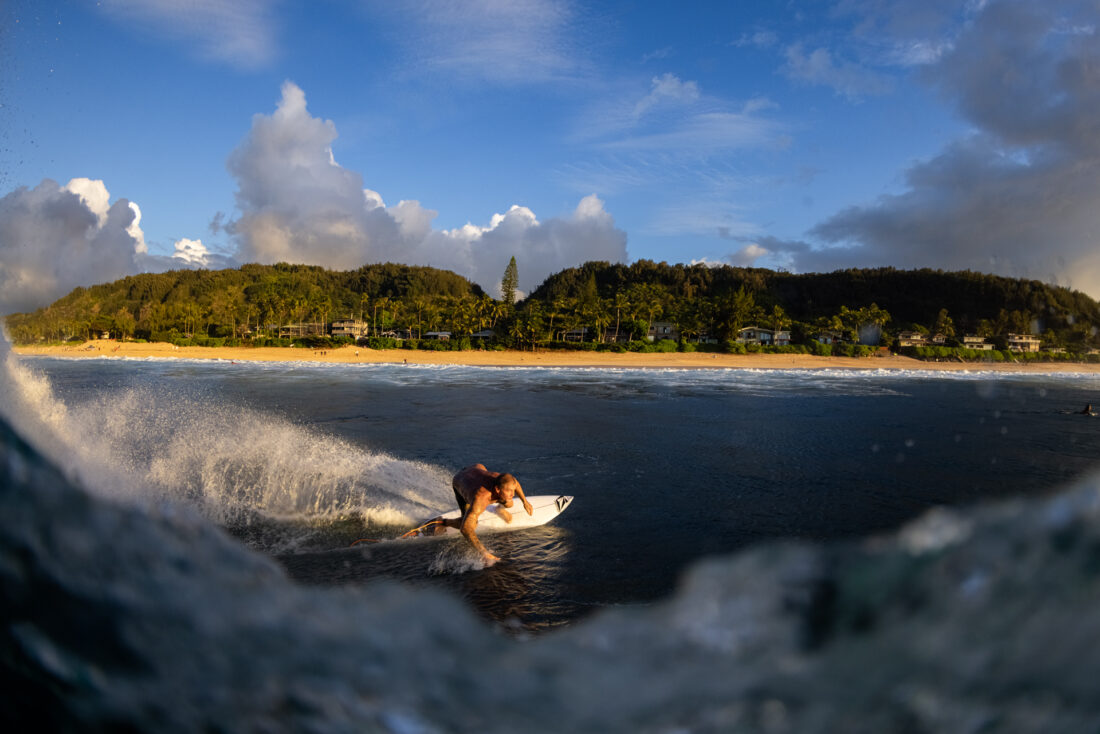 Surf photography as a full-time career can be a serious grind, and many of the photographers that thrived in the era when print magazines dominated the scene have struggled to adapt to the drastic changes in the industry. Veteran lensman Ryan “Chachi” Craig, has been at the forefront of surf photography for some time now, and is one of best examples of someone who’s made the transition to the digital realm gracefully. Previously, working as a staff photographer at Transworld and Surfer Magazine, Chachi was well accustomed to the strong support of the mags. While some veterans are paralyzed by a jaded nostalgia for yesteryear, Chachi brings the energy of a rookie to his work, finding joy and inspiration in honing his craft.

This North Shore season saw a historic run of epic waves, and you’d be hard pressed to find any photographer that spent more time in the water than Chachi. Beyond just being in the spot, Chachi’s focus on composition and framing the action to best capture the drama of the wave and the surrounding landscape are some of the signatures to his art, whether he wants to call it that or not.

How did you get into photography?
In high school, I never actually had a camera. But, I took a photography class, borrowed a camera, and remembered it being pretty fun. I couldn’t tell you exactly why. I didn’t have a parent who was a photographer. I don’t recall having too many friends that were photographers. This is pre cell phones having good photography equipment embedded within. I think it was just, I took a lot of ceramics classes. My dad was a glass maker. And, arts are always fun as electives in my opinion. So I don’t know why I took the class, but I can tell you that I absolutely loved the class. It was a good way to spend hours of your day at school, but not feel like you were at school.

The dark room was a magic escape for me. I was absolutely infatuated with developing your role of film in the dark, putting it through the spool. And then through all the different processes in the dark room, printing it, putting it through the developing bath, the fixer, all that stuff, watching your print come to life, literally in front of your eyes.

But that was all landscapes to start off. I grew up surfing a little bit, but bodyboarding more than anything else. And I would never have wanted to take days off to shoot when I could have been getting barreled. So that came a little later.

You’re a full-time photographer now, do you shoot more barrels than you ride.
Oh, significantly more.

Did, how did you make that, um, uh, evolution?
There’s no like cut and dry answer to that. I’m not one of those people that went in a certain route with a certain mindset and a timeline, and then either checked that box or didn’t. For me, it was an injury initially that led to surf photography. I was an avid sponger, loved it. Didn’t really love shooting anything surf related, because I wanted to be in the surf. And then I fractured one of my vertebrates body boarding and was sidelined for the better part of eight or nine months. And in that process was like, “What’s the best way to feel like I’m still in the rhythm of the surf world?” Shoot your friends surfing, and that’s what I did. And then I kind of never really had the same consistency surfing after that. I had a lot of pain in my back for years after that.

So getting the tube got replaced with getting the shot. We all know how at least surfers know how addictive being in the tube is and chasing that. But there’s a similar passion to photography and getting that right moment. What’s the most gratifying place for you now with photography?
I mean, it depends on where you are. In Hawaii, for example, there’s a million people surfing here and they all rip. So my personal desire to get barreled out here is kind of now in the background to shooting people on good waves. If you’re in the middle of nowhere and you’re with a couple buddies, I want to trade back and forth. I don’t want to be behind the lens the whole time, but oddly enough here, I don’t really have the desire to surf like I would at home. The opportunity to shoot the type of caliber guys that are here is kind of unique to just here. So I am just like full blown addicted to shooting as often as I possibly can. There’s a certain level of adrenaline being in that whole environment and just seeing a like an eight foot wave at Backdoor.

It’s the next step removed from maybe getting barreled yourself, feeling that energy and that power and seeing those guys that are fully capable of maximizing these waves is pretty cool. Let’s be honest, if I did have the chance to surf these waves, I’m definitely not gonna be getting barreled like Kelly or John. So it’s cool to watch someone read a wave like that, surf a wave like that, and then be able to photograph that front and center. We’ll call it the next best thing. I don’t know if it is, but we’ll call it the next best thing.

You’ve got a discerning eye, how do you think that evolved to where it is?
Landscape photos, first and foremost landscape photos, were the initial photos in my photography journey. In Hawai’i, I’m probably more of a water photographer. If I have my choice, I want to be involved. I want to be in the scene, but a lot of other places I find myself gravitating more towards land. There’s different backdrops. There’s a lot of different ways to shoot certain stuff. That doesn’t mean I won’t shoot water photography. It just means that I really enjoy shooting land photography as well. And I feel like all of my initial, decent feedback within the surf photography world was compositionally based. It wasn’t like, “Oh, you can swim in a decent size surf.” It was like, “Oh, that aesthetically, is great. It’s like a landscape photo with a surfer.” I would hear that kind of comparison.

Growing up in Santa Cruz and having Highway One north of Santa Cruz being wide open and having this unique ability feel like you’re exploring a new coastline every time you go up there. I love that whole home zone of mine and having Big Sur in the south. I just felt like landscape photography came naturally. And then by throwing a surfer into this scene, that would already be pretty enough. And if you can find a wedge with a guy doing a big blow tail, it kind of was a no brainer. So that was the first pathway I chose, well before I got more into water photography. It was kind of being a landscape photographer with surfers added to the mix.

In other words, it is an art to you. There’s art behind it, there’s a decision. There’s a lot of people who can pull the trigger. We got all these auto functions, but you are putting your art into it?
Maybe. I don’t know how much I like the term art for photography, at least with surf photography. Personally, I love good compositions. So, I guess if you associate art with composition, that term works. Having a good compositional eye I think is what makes or breaks, good photography, surf, landscape, other adventure stuff. I just love good composition for whatever that’s worth.

What’s on the horizon for you, with your photography?
I have had an informal kind of to-do list and goal list and I suppose it’s ever changing. You’ll start with something, then maybe you check that box and you reevaluate what you consider to be the next dream and goal. For the longest time I was working for a magazine and I did that for a number of years. I worked for Transworld briefly and then worked for Surfer for five years before they went under. And, that’s kind of all I ever wanted to do. And then when I was at Surfer, I thought it’d be cool if I could work with a brand consistently. So you’ll be on retainer with a bigger clothing brand, or wetsuit brand, or whatever, and the work is set up.

This year Hawaii’s been really good. For the first time in a long time, I kind of came over here with jobs already in place. This season, I’ve had a couple different jobs working with Volcom, and O’Neil, where your job is to get as much content as possible. I’ve been kind of a glorified freelancer for my whole career. I never really had one specific brand that I’ve worked with. It’s been mags more so than brands, but this year with a little bit of work lined up before coming over and that made it a kind of a different feel. I didn’t feel as much pressure, I suppose, to make back what I spent while I’m here. So this year has been really good for that.

I couldn’t really tell you about the next couple years. I have no idea. I really like where I’m at. It’s not that I don’t have lofty goals, but I don’t like feeling that lack of contentment. It’s like if you could sign a $85,000 contract as a surfer and have never been paid before. But, immediately they are like, “Well, I wish it was $150,000.” And it’s like, you’ve taken your whole life to get to where you are. And instead of being stoked, you’re kind of wishing it was more. So I’m fairly content.

I’d like to keep this type of Hawaii season that I’ve had, where I have more work than I can handle. And there’s been more days to swim than you even want. Those are good problems to have. I’d love the consistency of working with a few of the brands. But yeah, I’m really happy with where I am right now. Um, one personal thing I’d like to do is have a website, sell some prints. I’ve never done that in my entire life. I’ll probably be laughed at, by my peers for that, but that would be like a realistic thing that I think would be smart for me to have in the future. And, I have a couple print ideas, a few things that I think could be unique to my photography that I wanna dabble in.