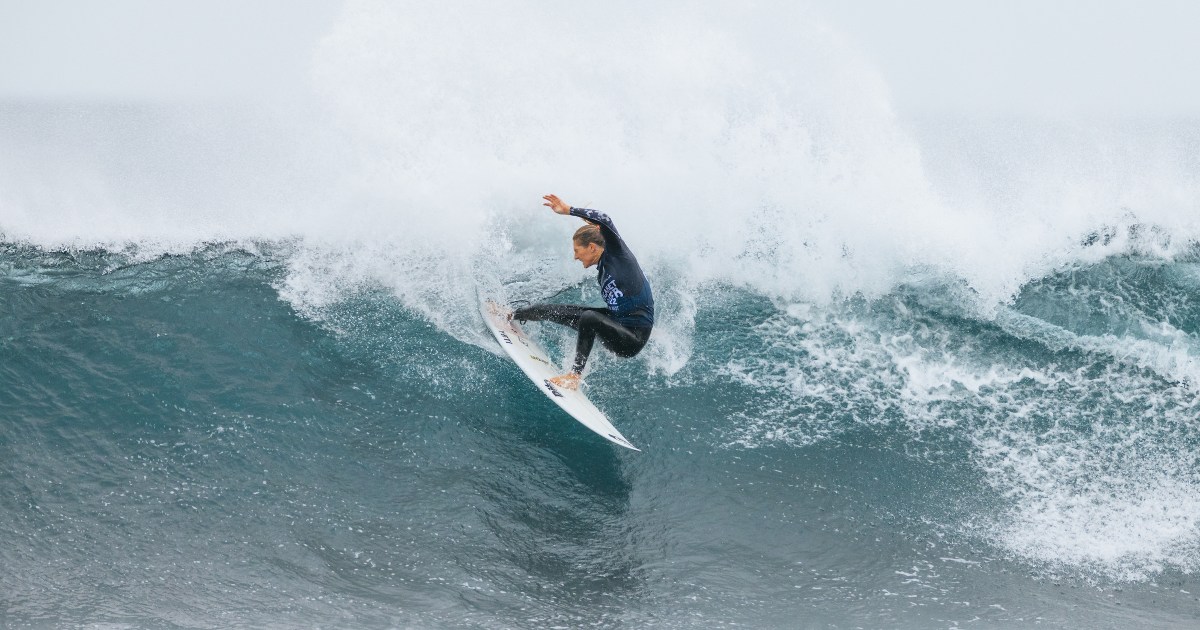 By the end of the Margaret River Pro, the 2022 ‘CT as we know it could be completely shaken up. The mid-year cut goes into effect after this event and the yellow jerseys could swap bodies. West Oz always seems to serve up some level of drama–through shark appearances or insane performances at the Box–and it’ll likely do the same this year, conditions willing (without the shark development, of course). The opening rounds of the women’s event started yesterday in fairly average conditions, but it looks like the competition is already heating up. Hit play above to rewatch Day 1 and continue reading for the WSL’s recap:

Veterans Get Campaign Off to Strong Start at Main Break

Two veterans of the CT who are in desperate need of a big result here at Margaret River are Courtney Conlogue (USA) and Sally Fitzgibbons (AUS) who are both right on the cut-line as competition commences. With each of them having found the ultimate success at this event in previous years, they’ll both be looking to replicate those results in 2022 as they aim to save their spots on Tour. Today, they both got off to the best possible start, each progressing into the Round of 16. Conlogue came second in her heat with Brisa Hennessy (CRI) whilst Fitzgibbons took a solid win over reigning World Champion Carissa Moore (HAW), who progressed in second place.

“I’m definitely in a pickle from the start of the season as everyone knows,” Fitzgibbons said. “I just need to enjoy it and see how I go. I know my surfing is still relative and I just want to keep the flow going and do what I can to get where I need to go. This is a special place where it’s so rugged and raw and just you in the elements and I do love coming back. I just need to keep applying myself and see what happens.”

Seven-time World Champion Stephanie Gilmore (AUS) is another big name in the hunt for a solid result here in Margaret River as she looks for a maiden win at the location and needs to place about the cut in order to continue through the back half of the CT. Today she progressed through to the Round of 16 with a solid performance in the Opening Round. Gilmore will join Johanne Defay (FRA) and current World No. 2 Tyler Wright (AUS) in the Round of 16.

Mixed Results For Rookies on the Cut Line

Aussie youngster Molly Picklum displayed her hunger to save her spot on Tour, claiming an impressive heat win over seven-time WSL Champion Gilmore and former Margaret River event winner Lakey Peterson (USA). Picklum was on a roll, attacking the end section at Main Break, guaranteeing herself a spot in the Round of 16.

“That was a dream heat for me,” Picklum said. “To verse two women like that in Lakey and Steph was inspiring to be honest. I got here early to practice and it seemed to help. I hope I looked like I knew what I was doing. My goal for this year was to make the cut and be at every stop on Tour so I really need to do well here at this event and get up on top of the cutline. That start was a great one for my confidence, it was almost like surfing a Final but it was my opening heat.”

Another Australian rookie who progressed into the Round of 16 with a runner-up finish in the Opening Round was India Robinson (AUS), who looked at home in the chunky West Aus conditions. Robinson came in a close second to Johanne Defay (FRA) who is hoping to hold onto her spot inside the Top 5 as the 2022 season progresses.

“It was a little bit tricky out there today,” Defay said. “It was a bit windy and a bit smaller than what we usually have here, but I just tried to keep busy and focus on building my scores throughout the heat. I also tried to be smart with priority and force the others into waves I didn’t want and it worked so I’m happy. I have been consistent this year but I want to break into the Semifinals at this event at least.”

Hawaii’s Luana Silva, Betylou Sakura-Johnson, and Gabriela Bryan now find themselves in the Elimination Round as they all finished third in their Opening Round Heats today. There will be plenty on the line with the three teenagers needing massive results here in Western Australia if they are to keep their spots on the CT alive in 2022.

For updates and highlights from the Margaret River Pro, please visit WorldSurfLeague.com.