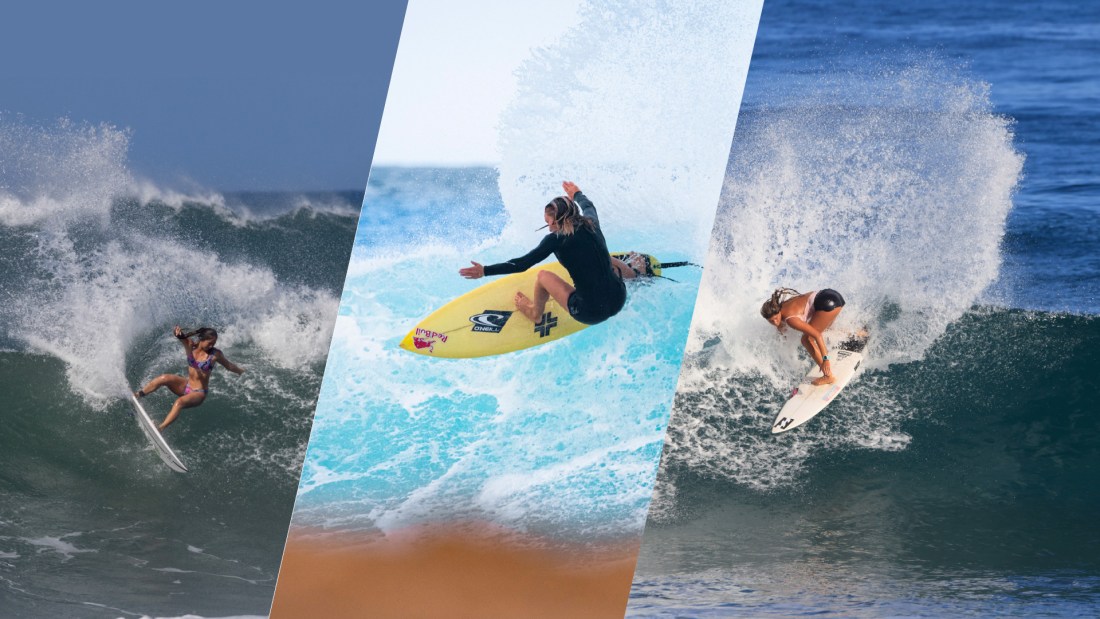 As kids, many of us can admit to dreaming of becoming a professional athlete. While it’s a pipe dream for most, it’s a realistic possibility for a select few. But even for the young prodigies, most don’t enter the professional scene until after they’ve graduated high school and are deemed an adult by society. But with every rule, there’s always and exception and this year, there were three big ones: Bettylou Sakura Johnson, Luana Silva, and Caitlin Simmers.

Born and raised on the North Shore of Oahu, Sakura Johnson and Silva grew up surfing and competing against each other. While both showed promise of successful surfing careers and had their sights set on someday qualifying for the Championship Tour, neither expected qualification to come so early in life. At the 2021 Haleiwa Challenger, the final stop of the Challenger Series, both teens surfed beyond the years. Sakura Johnson defeated five-time world champ Carissa Moore to take the win and Silva made it to the quarterfinals, providing both young women the points they needed to qualify for the 2022 Championship Tour.

“It happened so fast,” says Sakura Johnson. “I’m just going with the flow and making the best of it. I’m doing it now and hopefully it’s showing the next generation that they can do it as well—you should never not push your limits.”

“It was surreal,” says Silva. “I felt like everything was happening so fast and I didn’t realize what I had accomplished at such a young age. I was so grateful to be there and be surfing with my heroes and make all those cool relationships and connections.”

Most rookie years are tough, but with the WSL’s introduction of the new mid-season cut, Sakura Johnson and Silva had a more challenging rookie year than most. Both women put in their best effort but fell short when it came to making the cut.

“It was such a cool experience being on the tour for the first year and qualifying at seventeen years old,” says Silva. “With this mid-year cut it was difficult to process everything. I was still celebrating being on tour at stop number four and then when I lost, it felt like my dreams were taken from me. It was hard to process but it was a fun learning experience.”

After falling short of the cut line, both Sakura-Johnson and Silva joined the Challenger Series in hopes of finishing in the final five and requalifying for the tour. But the Championship Tour isn’t the only place with an impressive display of young talent. On the CS, sixteen-year-old Caitlin Simmers has been turning heads.

In 2021, Simmers won the US Open of Surfing. She rounded out the season in fourth place, allowing her to qualify for the 2022 CT. She ultimately chose not to accept the invitation and stick to the CS instead.

“I chose not to do the tour because I didn’t think I was ready and wanted to improve my surfing and spend time at home with friends and family,” says Simmers. “My goal this year is to do some trips and get barreled. I’m just going to do my best on the CS and go from there.”

So far, her best has been pretty darn good. She opened the season by winning the Gold Coast Pro and has been comfortably sitting at the top of the rankings since. Qualifying for the CT is almost a given, but whether she’ll choose to compete on it is still up in the air.

“It’s weird,” says Simmers. “I don’t consider myself a pro surfer—it just sounds too serious because surfing is still such a fun thing for me. In the future, I want to inspire people to have fun and shred through surf videos but for now, I’m just trying to enjoy surfing.”

This year, Sakura Johnson won the US Open of Surfing, putting her in a good position to requalify for the tour. Silva is sitting close behind but will need a few more solid finishes to secure her spot. The level of professional surfing continues to get pushed each year with each new crop of young surfers bringing something new to the table. Regardless of if Sakura Johnson, Silva, and Simmers compete on the CT next year, all have bright futures ahead of them.

“It’s cool that there are all these younger girls out there watching us on TV and getting to qualify and experience this,” says Silva. “I’m stoked to see all the younger girls push the limits harder than what we were doing when I was growing up.”