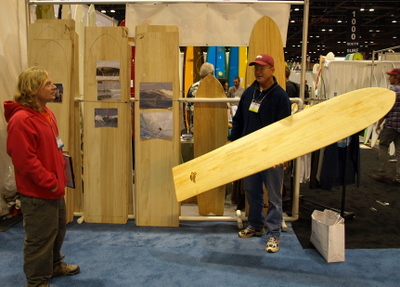 It’s that time of year again, and Surfindaddy (Tony) & Kay(cee) made our annual trek down to the Orlando Orange County Convention Center for Surf Expo, 2009.  See our write-ups from 2008 here, and 2007 here.  With the economic downturn, there has been a lot of talk – and there was at Surf Expo as well – concerning the state of the sport and how things are going.  Despite the general pessimism in other market segments, the mood at Surf Expo was generally positive – and the final numbers showed that it was just as successful as last year’s record-breaking show!Seems that when the going get’s tough – the tough take it on the chin and go surfing! (Or skiing, or whatever it takes to get our minds off everything that would tend to bring us down!)

So, 2007 was about the FISH, 2008 about the Stand Up Paddle Board.   Both of those models are still going strong, lots of them in evidence all over the expo, but what we found most exciting this year is (drum roll, please!)

the Alai’a!  Seems like everything old is new again, and man, are there some gorgeous old school (and I mean REALLY old school) boards showing up on our coasts.

In a more modern take on the Alaia, we saw boards by Surftech – and Tony mugged with Robert August and his son, Sam.  We also got to meet our Florida contact for Surftech, Eric Williams.

Getting back to some cool fish, we stopped by and chatted for a few with the guys of Da Hui – gotta love the marbled board in the pix!

After walking around for a while, Tony decided to try out some awesome sandals by SOLE – he said his feet hadn’t felt so good since his last surf session!

We stopped in and looked at some great Hawaiian shirts and beach gear by Hinano – and we gotta give them credit as one of the best looking “hut’s” in the show!

Ya know how you get a rash when you’ve been out for a major surf session?  Well check this out!  Surf Gel has got you covered!  Surf Gel prevents wetsuit and board short rash – and heals it!

Beyond Coastal has come out with an organic, PABA-free, waterproof sunscreen.  It goes on smoothly, smells great, and is chock full of nutrients and herbs to protect your skin!

Now, back to surfing – have you checked out the newest thing in skim boards?  They no longer just skim the tiny shore lappers – these are full on fun wave rippers!  Exile has some fantastic boards (and a pretty cool movie to boot)!

And for you fellow surf-dads out there looking to teach your groms – you might wanna check out the newest in INT Softboards – they have some updated graphics and styles to suit everyone!

Gordon & Smith were celebrating their 50 years in the biz with a new anniversary board – unfortunately my pic of the full board came out a bit on the fuzzy side, so you’ll have to take my word for it that it was fantastic – but you can see the detail in the shot here:

Another cool thing we got to see was a full scale clay model of a 1 1/2 life size bronze statue of Kelly Slater that is “slated” to be installed in Cocoa Beach this fall on 4th Street at A1A.

Tony has enjoyed riding his BIC Surfboards for a several years – this year he enjoyed getting to meet and chat with Peter Pan shown in the photo below.

For you skateboarders – check out these rides by Flexdex – they look pretty righteous!

We also met a distributor for Skincom who produce a great little solar tent in a small package – it’s super easy to put up, is open on all sides so that it doesn’t get hot, and provides maximum sun protection!

Finally, we stopped by Island Surfboards and talked with Roy Scafidi about his 100% epoxy boards.  He’s using an advanced new surf fabric called IN12 which is super light weight, yet stronger than fiberglass.

Below are a few more pics from the expo – hope you’ve enjoyed the snapshot of our day at Surf Expo!