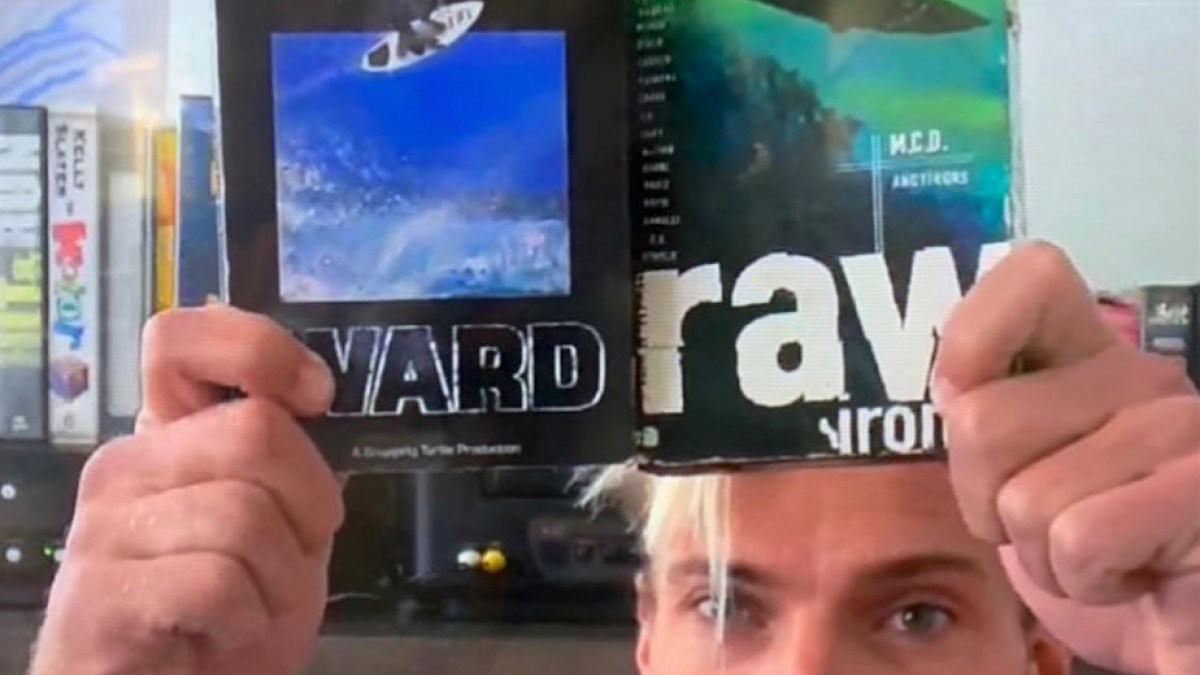 Last Friday morning, in the middle of an endless Instagram scroll, a post from Tanner Gudauskas caught my eye. It read: “Today 3 PM PST. Live webcast stream thing with @mfanno. With MICK MOTHER FREAKING FANNING!!!!! Mick is going to pick 2 out of these 3 VHS to watch today. Please tune in.”

Not sure what to expect, I logged onto Gudauskas’ newly created website, called theparadiseawarenessoutreach.com, to find a live stream featuring Gudauskas, at home, speaking with Fanning via FaceTime in Australia, before playing “Fanning The Fire” and “3 Degrees” on VHS. Re-visiting the all-time films was great, but even better was the FaceTime convo between Gudauskas and Fanning. Raw, real, unscripted and off-the-cuff, it was one of the most insightful Fanning interviews I’ve ever watched. The two spoke about everything from classic Rip Curl Search trips, to the boards Fanning rode as a teenager in his original biopic, to life at home in quarantine with a new baby on the way.

Wanting to hear more about Gudauskas’ idea behind the concept, we gave him a ring. Make sure to read to the end for Gudauskas’ (rough) live stream schedule for this week so you can mark your calendar and set an alarm. Each film is streamed live only, so you won’t be able to watch it after the fact.

So, how did this idea come to be?

It started with my brother-in-law sending Shelby [Gudauskas’ fiance] a live concert of a DJ, that he was doing from his room. I think his name was Disclosure. We put it on loud and danced and sent clips back and forth to each other and it made us all feel a little better.

Afterwards, I thought: there’s nothing like that in surfing right now. We’re all in our houses and not surfing, and, personally, I had been watching all these old surf videos as a dopamine hit and an escape to think about the trips I wanted to do, the styles I wanted to emulate. So, I put the two together and started last Monday with an idea but zero clue how to do anything. I YouTubed how to make a website, how to go live, how to do the the whole deal. I felt like everyone was getting so productive with their free time, and I wanted to see if I could get this going, just thinking the whole time I would text 20 friends and tell them to watch with me.

It sounds like the concept has really taken off in a week.

Totally. And completely by accident [laughs]. It’s full groms-for-life style. Basically, I just reached out to a good friend who does webcasting, Chris Steblay, and he had a small encoder laying around and put it in my mailbox. So I set everything up, then I thought: Fuck it, if anyone else wants to watch “Searching For Tom Curren” let’s do it, and put up a post to promote it on Instagram.

Such a rad idea. But even cooler is the fact you are getting the film’s stars and creators involved on FaceTime.

Dude. So rad. I reached out to Tom and his wife reached back and said Tom loved the idea. So I took that as an omen. So I said lets do it at 12 p.m. Pacific, then had a complete shocker and was an hour late [laughs]. But I still got the movie up.

You’ve come a long way in a week. The Fanning live stream was epic on Friday.

Each day has progressed, and now it’s some weird live experiment. I honestly thought it would get shut down right away, but so far I can stream these things live because right afterwards they get deleted. If you are there you get to watch it, if not try the next one. Which I love! Because it respects the videos I’m showing, and because I’m not trying to capture an audience to make money, subscriptions or a following — I’m literally trying to [be a] surf nerd and celebrate what these films and surfers gave to the culture of surfing.

I grew up watching these videos and completely idolizing the surfers in them. Then I put two and two together and realized that over time I had become friends with a lot of the people in them or knew the people who made them. Surfing is a family, no matter how big it gets. In times like these I feel like the core surfers are wanting to celebrate what it’s actually all about. When I started calling friends to say hi and see if they had anything to say about the films, straight away it was magic. It seriously blew me away. Troy Eckert told us the iconic Bruce Irons section from “Magna Plasm” was originally edited to a Black Sabbath song before the Ween song, but last second they switched it. So, on the show live we watched it with both songs. I loved Ween, obviously, and wondered how would that have echoed forward in history if that original song was the choice?

It’s great, though, because it could get shut down tomorrow or we could go on forever. People are texting me all day now. Pulling out their old videos and sending me their Top-5 favorites and shit. It’s epic. I also really want to reach out to more of the filmmakers for the behind-the-scenes stuff. I hope more people who are into this kinda thing tune in, because you never really know what’s gonna happen on each stream [laughs].

There’s no turning back now. You gotta give the people what they want. On that note, can you share the schedule for this week?

Nothing is set in stone, but the plan is to do one stream daily, and all at 12 p.m. Pacific. So, while the films and conversations might change, we should be live at 12 daily, at theparadiseawarenessoutreach.com. So far, the plan is:

Also, Rob Machado sounds like he is in for next week, so maybe we’ll connect on Friday. Slater is also fired up, but unconfirmed on exact date as of now. Best thing is probably just stay tuned to my Instagram for daily updates.