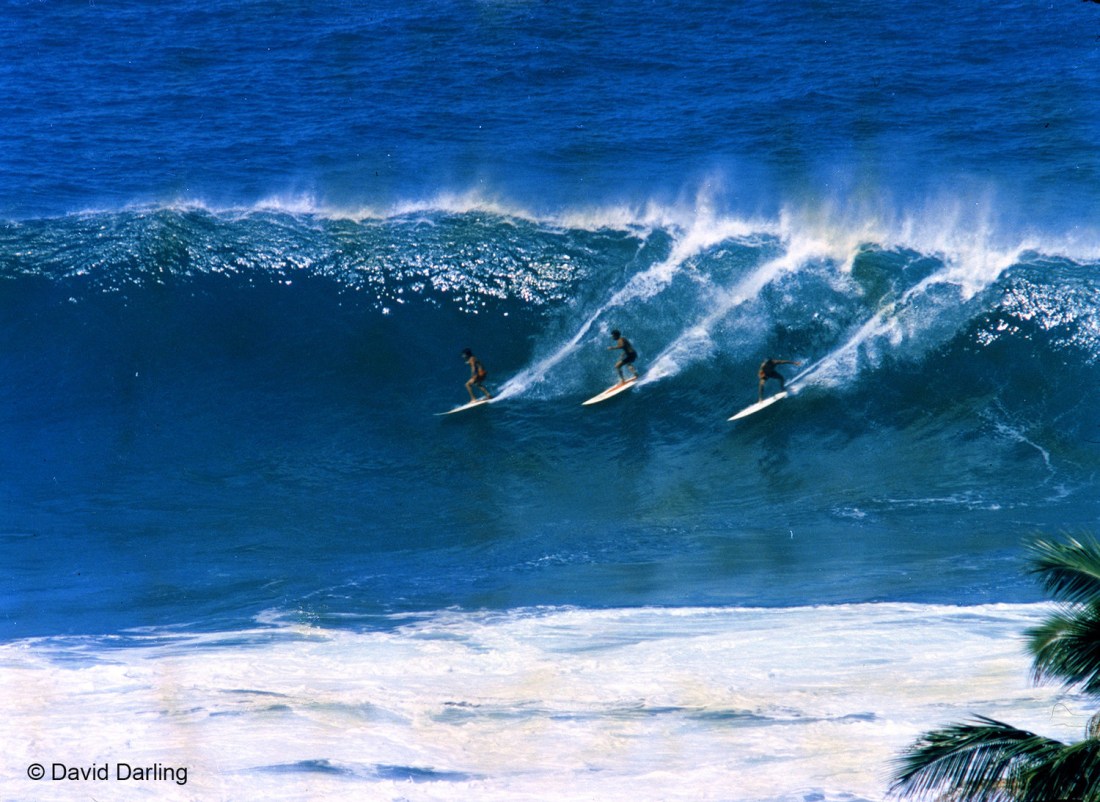 It was the summer of 1981. We were motoring our way out to the tip of Point Loma in a nominal watercraft I had purchased six months prior for $300. On board were Dick Brewer, myself, and two other friends, Dave Peterson and Keith Hennant. Although a bit worn, the 40 hp engine had not failed us, and in the distance, with the haze lifting, we could see the ninety degree mechanical wrap of a 4-6 foot south swell making its way around the point. With no other boats in sight, we would get what we came for. As we quieted the boat’s engine, we realized one significant problem though. We had forgotten the anchor. We then headed back near shore, and it was Keith who jumped overboard to pull up a rock from the shallow bottom, a really big rock. This would serve as our anchor… All good.

The surf that day was epic California, a session that remains permanently etched into my memory. I still remember the big grin on Dick’s face as he returned to the boat. In short, we had scored!

Chilling out after our surf and a few beers later, it was time to head back, so we went to pull anchor; the only problem was that no one could pull the anchor up. The rock was too heavy and adding to the debacle, the chain wrapped around the rock was bolted to the boat, and we had no tools to detach it from our end. From the words of the guru himself, he said, “Someone is going to have to dive to the bottom,” and without hesitation, Dick dove overboard, disappearing from view into the murky water and the kelp forest below us. Within a period of maybe thirty seconds, Dick managed to untangle the quagmire of rope and chain that held us captive, and moments later, we were on our way.

My reason for telling this story is that it reveals a few key elements of Dick Brewer’s character. For one, he was one of the guys, out to have fun and loved a good surf session. The story also takes us beyond the assumed parameters of Hawai’i Nei, exposing Dick’s California link. This is not insignificant, but setting that aside, the real moral of the story though is that sometimes you might be fooled, thinking Dick was just along for the ride and taking it easy, but in reality, Dick was calculating things the entire time and would do whatever it took to move things forward. This is the reason that he flourished from one generation to the next, and of his tenacious character, we are all the beneficiaries.

The early development of Dick’s surfboard designs was rapid between the years of 1962 and 1968, taking place in incremental stages. Models that brought Dick notoriety included the Pipeliner in 63, to which Butch Van Artsdalen brought global attention, and the Pintail Light Weight, probably the first board to incorporate edge in the tail. But It was a transitional board that would capture Dick’s imagination, later referred to as the Lotus. The story as it was passed on to me was that Dick made a 9’10” gun for David Nuuhiwa in the spring of ’67 and that David broke the nose off that board. With the help of Randy Rarick, Dick re-outlined the board’s nose, making it around two feet shorter. When Dick first surfed the remodeled version of the board out at Chuns, he was surprised at how well the board performed and how easily it moved up and down the wave. I don’t know whether it was revelation or confirmation, but Dick understood that greater control out of the back third of the board could allow for less rail line, making the board more maneuverable but still directional. The seed that was planted from this experiment would ultimately come to fruition six months later at that pivotal moment when Dick shaped the first Mini Gun for Gerry Lopez, what we now recognize as the first modern “short board.”

The term “Mini Gun” may seem peculiar in our day, but the term gives way to the single most significant evolution in surfboard design. At that time, shapers all over the globe were looking at making shorter boards. Outlines were beginning to change and things were in flux, but the platform was still based on the physics of early 60’s longboard design. Instead, Dick recognized that the characteristics of a short gun was where the future of surfing lay.

The evolution of the Mini Gun wasn’t just about outline, though. With a background in aeronautic design, the culmination of Dick’s design innovation is that he changed the entire platform of surfboard design from hydrodynamic to aerodynamic. Dick treated the surfboard as though it was an airplane wing. I use a quote by master surfboard shaper Steve Boehne, as it simply and accurately describes Dick’s innovation.

Down rails combined with foiled tails gave Dick’s surfboards the ability to track and ride higher on the waves’ surface yet still penetrate and control deep turns. In reverse, releasing pressure from this penetration would accelerate the board. I remember what Owl Chapman said to me many years ago, comparing it to “Squeezing a wet bar of soap out of your hand.”

If the only thing Dick had done in his shaping career was to create the Mini Gun he would have already accomplished more than any other shaper in history. This single design has impacted every surfboard since, whether short boards, long boards, or big wave boards. But Dick didn’t stop there. Dick kept moving forward in design development in every generation, never looking back.

Giving evidence to this was Laird Hamilton towing in at Teahupoo in 2000, on what would be referred to as “The Millennium Wave.” It was a seemingly impossible wave made possible; a historical moment that would completely change the trajectory and perception of surfing big waves. Buzzy Kerbox describes the early design evolution at Peahi that would eventually lead to that point. “Dick’s knowledge of the ocean, the equipment needed for any condition, and how to deliver the perfect board is legendary. While a 9’6” Waimea Gun is perfect for some waves, we found it not to be perfect for Peahi (Jaws). It was 1993. Darrick Doerner took Laird to see Dick and described the problems. Dick said, “come back in an hour” Suddenly, there it was; a 7’4″, sixteen-inch wide board specialized for Tow-in. A giant progression for the sport. Dick had done it again.”

As shapers, we are hesitant to give anyone credit for being the inventor of any surfboard design, the reason being that almost every design is a natural progression and all too commonly, someone else is also dreaming up the same design, possibly in another corner of the world. Dick is the outlier, though, in whom all the stars would line up. From wings to multi-fin surfboards, Dick’s innovations would become so universally accepted, that today, there is not a board in the water that doesn’t have Dick’s fingerprints on it.

Going back 48 years, I remember being at Pt. Loma High and seeing the surf film “A Winter’s Tale,” one of the best international films of the time. Midway, the film reveals some of the great Hawaiian surfing of that era, including surfing by Gerry Lopez, Ben Aipa, Sam Hawk, and Larry Bertlemann. The spectacle of the film that evening though was seeing 22 year old Owl Chapman doing his “Birdman” move at Pipe, dropping to one knee with his hands in the air. At that point, everyone in the auditorium went berserk! Owl was (and is) a rock star and a mega-talented surfer, but he would admit that this was also made possible by the surfboard under his feet. Instead of the kamikaze bravado of generations past, as Owl demonstrated, surfing waves of consequence could now be done with finesse and a level of confidence, made possible by one man, “Dick Brewer.”