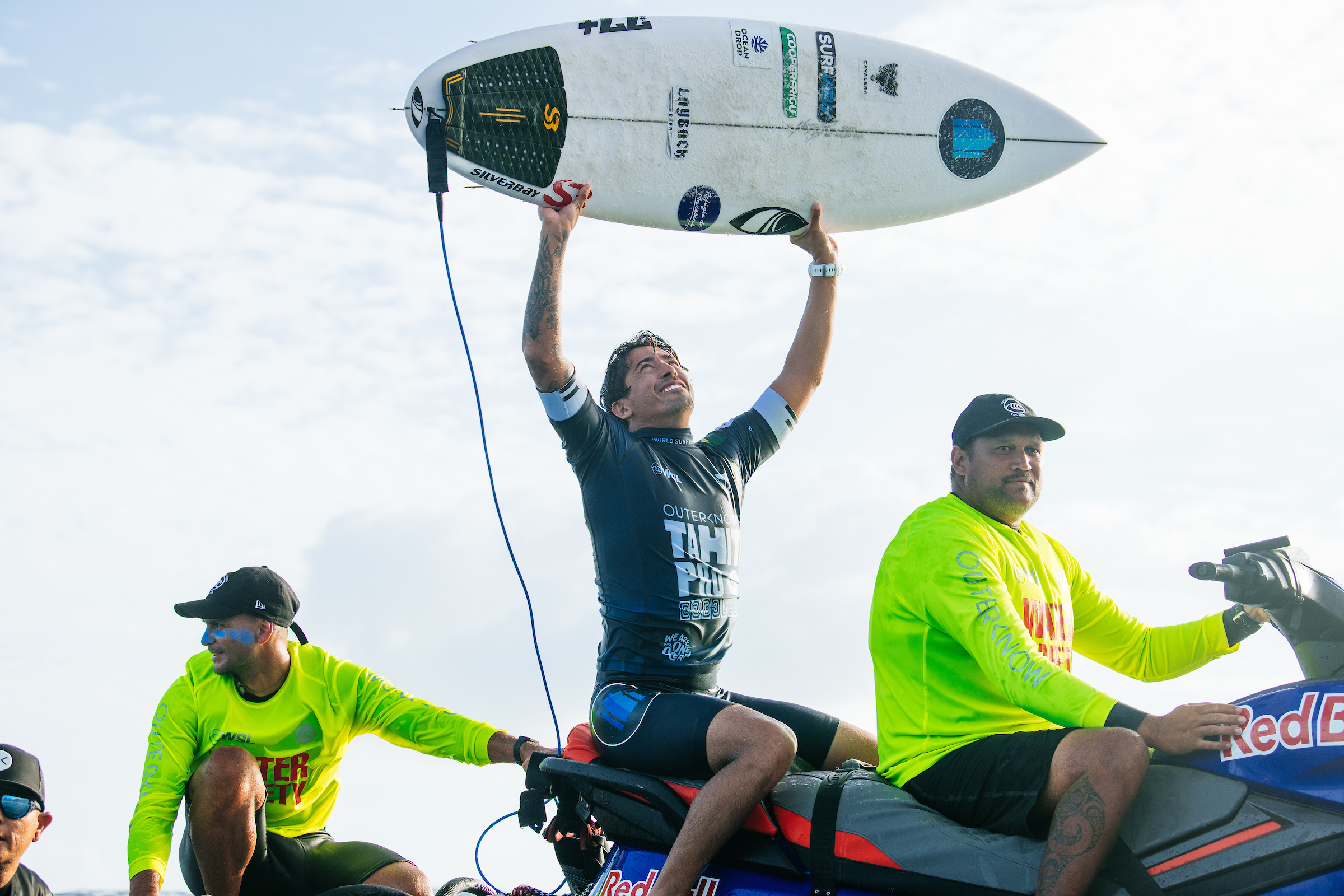 After days of pumping waves, two victors by the names of Miguel Pupo and Courtney Conlogue took home the Outerknown Tahiti Pro 2022 titles. Both marked massive wins for the Brazilian and Californian. Conlogue was the first woman since 2006 to claim a win at the End of the Road and Pupo scored his only ‘CT triumph in a decade. Rewatch the finals both above and below and continue reading the WSL’s breakdown if you missed all the action:

Following four days of action at the famed Teahupo’o surf break, Finals Day culminated in clean four-to-six-foot waves, alternating between women’s and men’s rounds. This competition marked the return of the women’s CT to Teahupo’o for the first time in 16 years and witnessed inspiring performances from all competitors.

Following the Outerknown Tahiti Pro, the WSL Tours and Competition team has confirmed the Top 5 men and Top 5 women who will compete in the Rip Curl WSL Finals, the one-day event that will determine the 2022 World Champions.

Californian Courtney Conlogue (USA) has claimed a historic win at the Outerknown Tahiti Pro Teahupo’o, being the first woman to do so since 2006. Conlogue was on fire all the event, showing serious commitment to book herself a spot in the Final with Brisa Hennessy (CRI). The Final was a matchup between two of the event standouts, but Conlogue took control, by being in-tune with the waves and displaying incredible finesse in the tube. She posted a 7.50 (out of a possible 10) and backed it up with a mid-range score to put Hennessy out of contention. Conlogue claimed her 13th CT victory and her first since the 2019 Rip Curl Pro Bells Beach.

“Honestly I’m just so grateful for this–it’s been a long time since I’ve had a win,” Conlogue said. “This year has had so many challenges and highs and lows. I love this wave. This wave is so magical and I feel really lucky to win here. It was great to share the Final with Brisa. She was charging all event and sending it. This is the perfect way to end the year. This one is for all my friends and family and sponsors, I wouldn’t be here without them. And also, to WSL for bringing the women back here, I’m grateful.”

Earlier in the day, eventual runner-up Henessy came up against Californian Lakey Peterson (USA) in a Quarterfinal 4 Heat which would see the winner clinch a spot in the WSL Final 5, ahead of next month’s Rip Curl WSL Finals. With Peterson coming into the event in sixth on the rankings and Hennessy in fifth, Hennessy claimed the Heat win by pulling into a long draining barrel to claim the heat win. Hennessy’s second place finish here today has put her in the fourth seed spot for the WSL Finals.

“I’m trying to soak this all in, at the moment,” Hennessy said. “Having my mom and dad here and all of the women on tour sharing this beautiful lineup is so special. It was incredible to share the final with Courtney (Conlogue) – she is such an inspiration in consequential waves and is just a fun person to be around, so it’s been a great day. I’m feeling positive at the moment and want to carry this positive energy into Trestles.”

Miguel Pupo (BRA) claimed his maiden Championship Tour victory today at the Outerknown Tahiti Pro with an incredible performance against local wildcard Kauli Vaast (FRA), in what was both surfers’ first CT Final.

“It took me 10 years to finally win a CT event,” said Pupo. “I’ve been winning on the Challenger Series, and I wanted to get one [CT win] this year, and get a trophy to see my hard work pay off. This trophy is for you my love, my babies, my mom, my dad, everyone on my crew. Thank you so much for all of your support.”

Despite missing the WSL Final 5 by one spot and finishing in sixth place on the CT rankings, Pupo is sure to be a contender in 2023. He celebrates his best year on the CT, since 2011, with his first Final and his first win at the Outerknown Tahiti Pro. The Brazilian started the season off with a third place finish at Billabong Pro Pipeline and had shining moments at events throughout the year, such as the Oi Rio Pro and Rip Curl Pro Bells Beach.

Vaast came into the Final as the man to beat, having taken down 11-time World Champion Kelly Slater (USA), World No. 3 Ethan Ewing (AUS) and Matthew McGilivray (RSA). However, he was up against CT veteran Miguel Pupo (BRA), who put on his best performance of the event, threading multiple long critical tubes, to post multiple excellent scores for a heat total of 17.17. Vaast came close to turning the tide but, uncharacteristically, fell on the exit of a couple of set wave barrels and came short of claiming first Tahiti Pro win for a Tahitian.

“I feel incredible right now,” Vaast said. “I may have lost, but it is what it is. That’s just competition and I’m super happy for Miguel. There are so many emotions with all of this support from Tahiti and in the channel. I want to cry – it’s a good feeling.”

The Outerknown Tahiti Pro confirmed the competitors and finalists for the Rip Curl WSL Finals. After the 10-stop Championship Tour, the Top 5 men and Top 5 women on the CT rankings will now prepare for the final event, which will be held at Lower Trestles in San Clemente, Calif. from September 8 – 16, 2022.