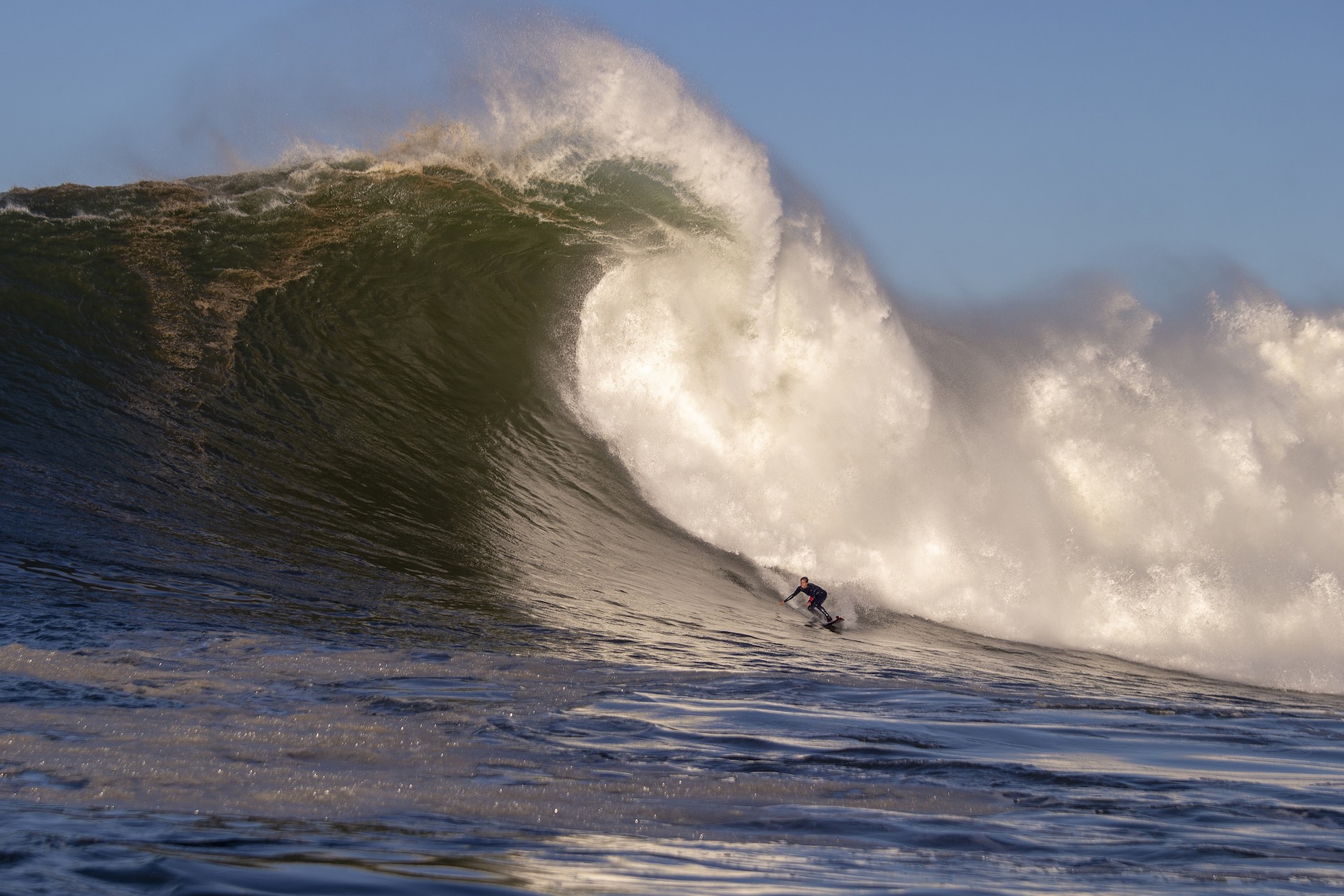 As all things 2020 have been trending, so was the winter forecast for the big-wave season ahead. Surfers anticipated less-than-good conditions courtesy of La Niña weather patterns impacting the Northern Hemisphere, generally resulting in less swell and colder water.

However, on Dec. 8, and seemingly out of nowhere, Mavericks awakened from a lengthy slumber and began firing on all cylinders.

Located just outside of Half Moon Bay, CA, the storied wave has a reputation for consequence that precedes it. But despite its distinction, the spot is finicky and typically only works during a big swell coming from the west to west-northwest, with minimal wind.

According to Kai Lenny, recent men’s winner of the WSL’s XXL Biggest Wave Award, the swell was coming from a different direction than normal. Lenny, who flew in from Maui for the conditions, says the swell was filling in from the north, causing the waves to break over the reef—a spot that hadn’t yielded such ideal conditions in a decade. Additionally, the sun was out and the wind remained light, maxing out around 1.5 mph in the afternoon, allowing for surfable 30- to 50-foot faces all day.

“From all accounts, it was one of the best days ever,” says Lenny. “They were calling it the ‘day of days’. This was a swell where you could surf maybe the biggest wave you’ve ever paddled into from sunup to sundown.”

Lenny wasn’t the only out-of-towner who flew in for the swell. In addition to a number of boats and jet ski safety crew, the lineup was stacked with legendary big-wave chargers such as Grant “Twiggy” Baker, Ian Walsh, and Peter Mel. The majority started out the morning doing tow-ins. Once the light hit, however, they swapped out tow-in boards for their guns and spent the remainder of the day paddling in.

Lenny clocked 12 hours in the water that day, only breaking for 15 minutes to down a burrito before paddling back out.

“When those days come around it’s almost impossible for me to not want to maximize it because I know how quickly it will go by,” says Lenny. “I’d rather push myself as hard as I possibly can and then rest later.”

As Lenny frames it, Mavericks is a proving ground for the young guns trying to make a name for themselves. In addition to a number of big-wave veterans, there were a few groms out, pushing their limits. A particular standout was 18-year-old Luca Padua, a Half Moon Bay local who is leading the charge for Californians, sure to be a regular in the Mavericks lineup for years to come.

“I remember being there myself: keen and hungry but also scared and nervous,” says Lenny. “It’s fun to share sessions with these guys and watch them learn, grow, and experience what big-wave riding’s all about.” 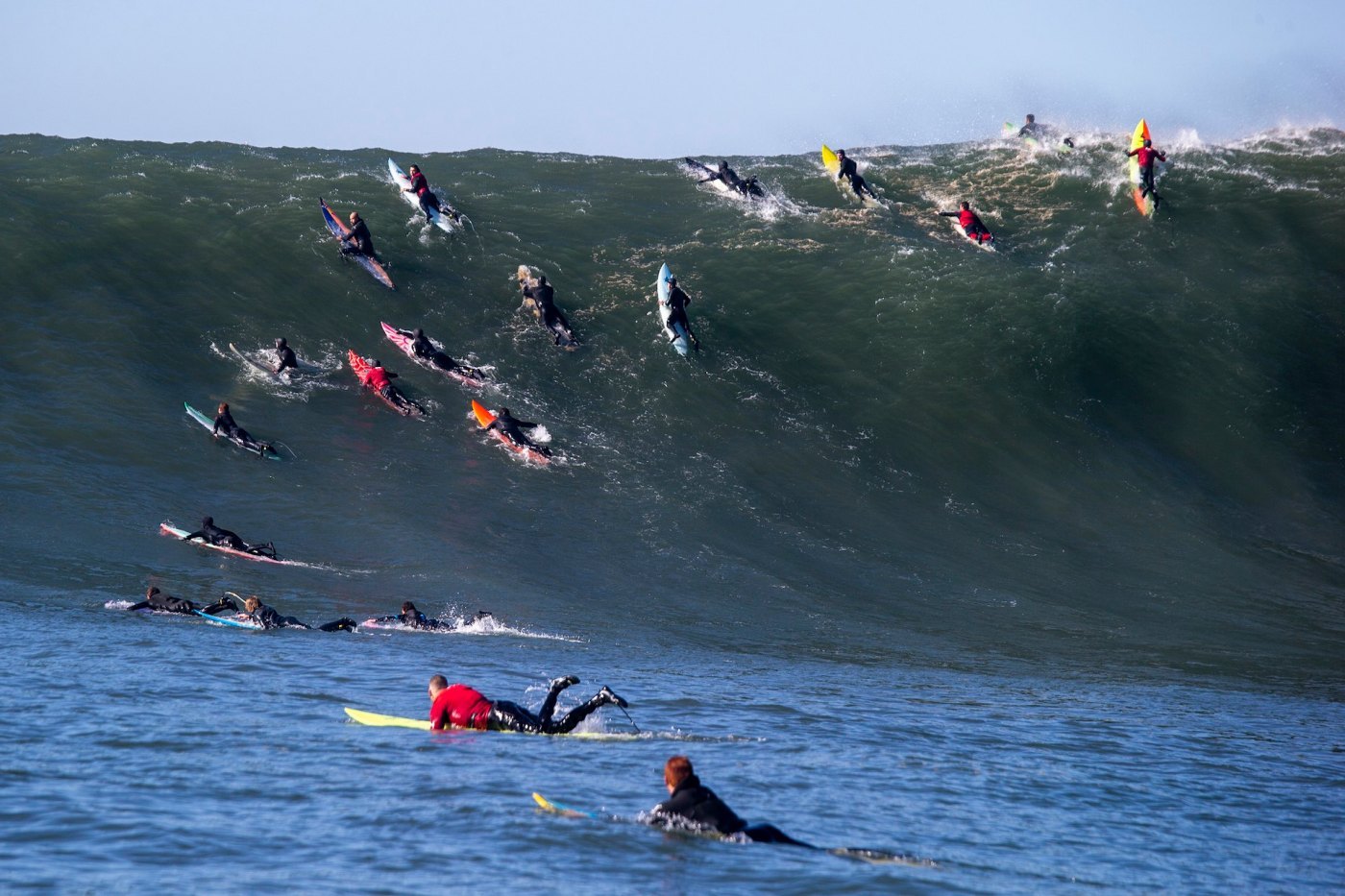 When the next big swell will hit Mavericks is anyone’s guess. Although the early December conditions for the books only held for two days, many called that Big Tuesday a “career day,” agreeing they scored some of their lives’ best waves.

“I got a really big wave early in the morning and I was bottom-turning and could see a lot of my friends in the channel with their arms up in the air,” says Lenny. “They were so far away that I was kind of alone, but they were with me as well. Big-wave surfing is a lot of camaraderie, and on this swell at Mavericks, everybody just wanted to see each other get some big waves.”