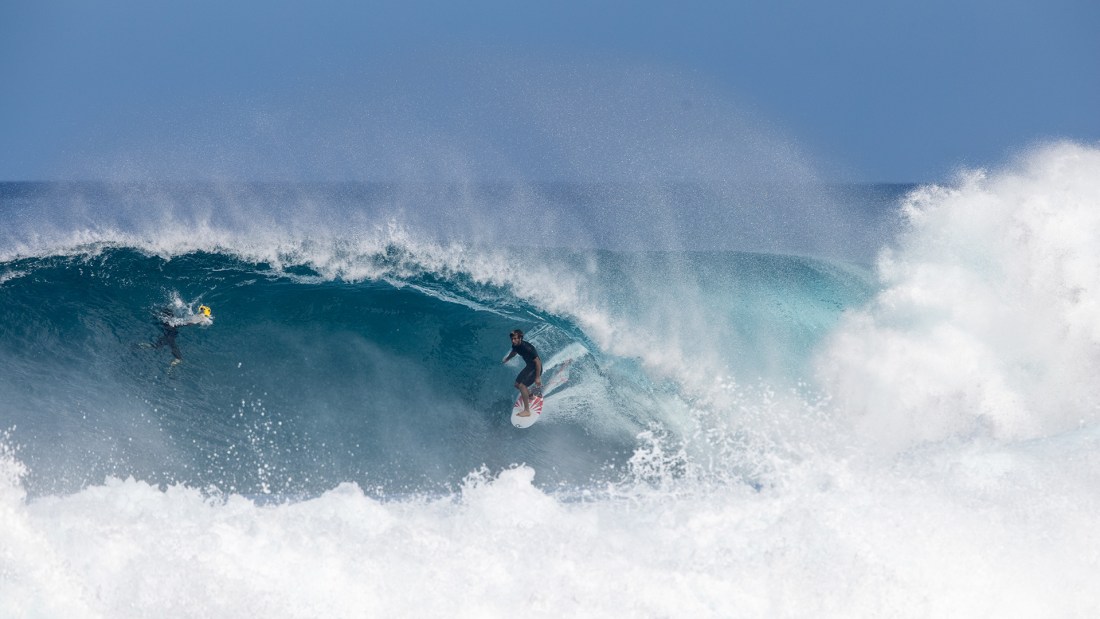 It’s no secret that the top echelon of surfing is more competitive than it has ever been. There has been a rampant increase in the number of excellent surfers around the globe in the last few decades, and there are no signs of this trend stopping anytime soon. While the WSL technically decides who reigns supreme, there are the occasional surfers whose talents transcend the confines of the competitive realm. (Think AI, Bruce, Taj, Occy, Curren, Slater, JJF, etc) Once in a generation surfers who share an intangible x-factor that draws the admiration of the masses.

Western Australian native Jack Robinson, is one such surfer. Long touted as the next big thing, with a preternatural ease in waves of consequence, and heavy shades of Bruce and Andy’s style in his surfing, he possesses that one in a million natural talent that just can’t be taught. Understandably, when you’re as good in waves of consequence as he is, you can be forgiven for being less than intrigued about grinding it out in the notoriously bad surf of the Qualifying Series. As a result, it took longer than expected for a talent of his caliber to qualify for the world tour. He finally broke through at the end of 2019 with a historic victory performance at the Sunset World Cup. Unfortunately, his World Tour debut would be delayed due to the global pandemic.

Now, at 23 years of age, Jack has utilized the last year to ready himself for his premiere on the world stage, and is looking every bit ready to fulfill the extremely high expectations the surf world has placed on him. We spoke with Jack just before his departure to Australia where the WSL World Tour would kick off the 2021 season in earnest.

How has your extended stay in Hawaii been this year. Was it planned to be this long or did you just roll with the punches and stayed longer as the situation changed?
Every winter I’m here for as long as I can be. I just feel good here and have a lot of friends. And I have Eric [Arakawa], who is my shaper here. This is probably a little bit longer than usual because we have been delayed with the events. But, I couldn’t be happier.

At what point did it start to click for you, where you were like, “All right, yeah, I feel comfortable here in Hawai’i?”
Probably the first time I came. That was probably like 10 or 12 years ago now. I feel like I connected with all the kids here at that age, and just connected with everyone. I came with just my dad, rolling through just like we would at any other place. Just surfing and not rolling with many people, just him and I. We did that a lot. I went to Tahiti, I went to all these places like that. And, I felt like I made good connections with everyone. I come from a similar place in West Oz. So it’s similar surroundings, at least.

I remember when I first met you when you were riding for Quiksilver and Stephen Bell, the Global Team Manager at the time, had organized an informal grom camp here on the North Shore with yourself, Leo Fiorivanti, and Kanoa Igarashi. You guys all must have been 12 or 13 years old. It’s crazy that you all had different paths, but in the end all three of you made it to the top echelon of surfing. It’s cool that he saw that in you guys so early on.

I was thinking about that. That was when I first got on Quik. They put us together and we’ve been good friends ever since. We also went to Indo for the first time, we wanted to scrap each other, haha, but we’ve always had good times. We were pretty lucky to travel, the three of us, and actually Mikey Wright was traveling with us a fair bit too. It was like a dream, each kid from a different part of the world, but we got to go everywhere. It’s been such a long journey, it’s just crazy to see where we’re at.

You haven’t really had your rookie year yet?
What do you mean? I’m a veteran, I had one year. Haha

You had one event?
One event!

That’s wild, to work all the way up to it and then be put on hold. Not to mention this last year felt like five years. Talk about the journey on the QS for you, obviously people mostly see you in gnarly waves getting barreled off your head. Was trying to qualify a struggle for you?
I was having so much fun, going to all these places, so I didn’t want to go surf crappy waves in a contest, you know what I mean? When I was around 15 years old, that’s probably when I started getting into a few QS’ and doing it. But I remember there would be these epic swells in Tahiti, and I went down there like four times in one year. I was probably lucky I did that now. Because you see a lot of guys on tour that aren’t comfortable in a lot of places like that.

But, I struggled on the QS. It was just the lack of motivation for it. I’d be embarrassed to surf a one foot wave all the way to the shorebreak. I’d be like, what am I doing? You know? When you’re trying to milk it, but that’s what it took. I lost my seeding for a year and then went back to it, got in the good events again. I started to have a few moments, but I lost so many times, I just lost, kept losing, and losing, and never really made that many heats. I was barely hanging on and the heats that I had to get through weren’t even that hard. I was like, “What the hell?”

I was probably overthinking it. You start doubting everything when you’re losing so much. Finally, I stopped overcomplicating it and a lot of other things came together. I didn’t really have to think too hard about it, I just had to focus on doing it and being more motivated for it.

With the whole qualification thing, there is this razor’s edge where it grinds everyone up, and some people’s careers and dreams just fizzle away. It will eat them up and spit them out and the pro surf dream just ends. And, it can be the gnarliest guy ever, it doesn’t matter. But, if you’re just able to break through, then you can keep the dream alive. But, the dream could be over for anyone. Were you going crazy when you kept losing? Were you thinking this could be the end for me?
Yeah, it’s crazy. Because I sorta got pissed off with everything. And, the only thing that would make me happy was going to surf good waves. But, then on the other hand I wanted to be on the tour. And, I would see guys on there and I’d be like, “How did they get there?” But, it took a number of things. I kind of uncomplicated everything. I got super focused. And, I got really into it. I think I just got sick of losing. I just got pissed off of it in the end and that’s what happened.

I just wanted it more. A lot of guys will quit before that, it’ll just drag on, and they’ll eventually quit. I got really angry with losing and that just made me hungrier.

Before, I would be embarrassed or unmotivated in crappy waves because it wasn’t that exciting, and I shouldn’t have been. Because, that’s just what comes with it. It’s not going to all be perfect, even on the World Tour.

Let’s talk about surfboards. I think you’re pretty unique in the sense that there’s not a lot of guys that aren’t from here that ride boards exclusively from a Hawaiian shaper. Which always kind of baffled me because we have such good shapers here in Hawai’i. But you’ve been working with Eric Arakawa for some time now and it seems like it’s working out sick for you. How has that relationship evolved?
Yeah, it’s interesting. Because I’ve seen all these guys from Hawai’i on boards from OZ, like JS’ or whatever. But the shapers are so good over here. Shapers like Eric [Arakawa], the Tokoros, there’s a bunch of them. And, everyone’s so good. I think that if those same guys put the time in with these shapers they’d find what they’re looking for, it’s just about evolving together. Sometimes people get bored of the evolution of it. If it’s not going somewhere for a while, then they’ve got to change it up.

For example, working with Eric, the boards would go incredible over here, but working on the smaller boards it took a while to get them in the right place. But, he’s already so good, so you know we’re going to get through it and make something that really works. Especially when you’re working with someone that closely and you have that much time together.

A lot of guys get bored with that process of it. If it gets boring for them they have to change. They’ll move around, and if they start to doubt themselves. That’s one of the first things surfers will do, if they doubt themselves they always have to change to a different board. And, sometimes you just need to stick with it.

It’s a constantly evolving process, because Eric’s adapting, and I’m getting better at surfing, so I’ve got to figure out more things on my end as we go. Luckily Eric’s always had a lot of patience and always been super cool to deal with. He’ll do anything, he’s one of those guys that doesn’t stop. He’s always looking to be better at what he does. If he wasn’t making surfboards, he’d probably be making swords or something like that. Haha

By every metric Eric should have a team the same size of JS or CI. But, you’ve pretty much have unfettered access to a world-class shaper. So, that patience really paid off.
Yeah, it’s really wild. It’s like John John with Pyzel, we kind of have a similar thing. And Eric has said it’s a lot of energy shaping and for too many different riders. If he has his key guys it’s all cool. I think he liked that with Andy as well, where it would be more of an in-depth one-on-one kind of thing.

One thing that actually really baffles me with the whole surfing thing is guys that are in the same heats, but they have the same coach. Literally it’s you or him, each one of your careers, is in that heat. And, you got the same coach. What’s he going to tell you, you know what I mean? I think that it’s kind of crazy.

Well, it seems like you found your own path, a way to do things, and people who compliment your approach?
Yeah, everyone has their own path. You just gotta do it in your way, I suppose, whatever works for you. I’m just lucky to have Eric, and lucky to have good people like that around. They’re all part of the team, and it makes everything better.