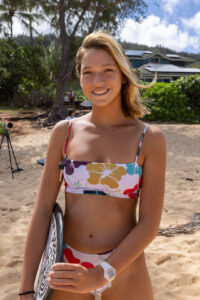 “The precious descendent that stands illuminated…”

It is often said that a woman’s heart is a deep ocean of secrets.
Having spent most of her life near the sea or in it, sixteen year old Pua Desoto has her heart and spirit invested in that ocean, and it is certainly no secret.

Pua DeSoto’s roots are firmly planted in the sea. Her father is 2010 world longboard champion Duane DeSoto and her mother Malia Ka’aihue comes from a long line of fishermen and water people, so it’s no surprise that DeSoto took to the water. Between her blood relatives and adopted family of west side surf legends, the young Hawaiian was riding waves well before she could walk.

Born and raised in Kaimuki, DeSoto caught her first wave at just five-months old with the assistance of her dad. By the time she was two, she was riding waves on her own and at three, started competing. At eleven, DeSoto knew surfing was something she wanted to pursue professionally.

“Growing up on the west side has always been very inspiring because a lot of legends come from here,” says DeSoto. “People look down on us because of all the violence that shows up on the news but it’s actually such a good community. It’s where most of the Hawaiian population is in the entire world.”

Inspired by legends like her father and west side locals like Aunty Rell Sunn, Uncle Buffalo Keaulana, Uncle Brian Keaulana, and Aunty Pua Mokuao, DeSoto grew up surfing and learning from the best. Under their guidance, she began by competing in local HASA and NSSA contests when she was eleven. By age thirteen, she was doing WSL junior pros and QS events. Now, at age sixteen, DeSoto has seven national titles under her belt.

DeSoto grew up longboarding in Waikiki but when she decided to focus on surfing as a career, she switched her attention to shortboarding. Although she still competes in both, the majority of her time and training goes into shortboarding.

In 2019, DeSoto won a title in both longboarding and shortboarding at the NSSA National Championships, becoming the first person to ever win both a long and shortboard title. In 2020, she secured two longboard and two shortboard titles. This year, she already has one longboard title under her belt but is entered in seven divisions at the 2021 NSSAs and hopes to add a few more titles to her collection. Carissa Moore currently holds the record with 11 titles, but DeSoto hopes to give the champ a run for her money and up the ante.

Although DeSoto is honored to be a national champion, her proudest accomplishment to date is winning the waterwoman award at the Buffalo Big Board Surfing Classic in 2018. Held in Makaha, the event has been around for decades and DeSoto has witnessed a number of the aunties she looks up to win the title over the years.

“Makaha means fierce,” says DeSoto. “I would describe my style as fierce and empowering. Growing up on the west side, everybody is very fierce—that can be the bad of some but the good of most.”

Although DeSoto is a natural talent in the water, her success is the result of lots of hard work and determination. Typically, DeSoto surfs two to three times a day, with one to two land workouts sprinkled in between sessions. Although she’s worked with various coaches over the years, her dad has served as her main mentor and surf coach, while her older brother works with her on land doing tactical fitness, strength training, and balance drills.

“My dad has always been my biggest surf coach,” says DeSoto. “He’s helped me with the business side of surfing, technique/style, how to charge big waves, power turns, and take my surfing to the next level. He doesn’t walk away like some coaches do—he’s always be there.”

“From day one, Pua’s success is rooted in her commitment to training and always having fun,” says her dad, Duane DeSoto. “Her west side upbringing has given her an honest and humble perspective of what all of Hawai’i is—she has been blessed to be raised around kupuna who surf, dive, fish and everything else in the ocean.”

Outside off surfing, DeSoto has a lot on her plate. Between waves and workouts, she works on homeschool assignments for 2-3 hours a day. Alongside her family of ten, she helps run Na Kama Kai, her dad’s non-profit that brings ocean-based safety and conservation programs directly to Hawai’i’s youth.

Additionally, DeSoto has a knack for photography and as a kid, would sneak cameras out of people’s bags and begin snapping photos of them. She’s also a talented poet and is currently working on a poetry book that has been five years in the making. DeSoto is also very interested in business and entrepreneurship and plans to study it in school, should it fit in with her surf schedule.

Although DeSoto is only sixteen, she has big plans. Inspired by women like Carissa Moore and Aunty Rell Sunn, DeSoto plans to make a mark on the surf world while representing her Hawaiian heritage well.

“My ultimate goal is to be an Olympic gold medalist and a world champion,” says DeSoto. “I want to be one of the best but also be a role model to others and spread the Hawaiian culture. At the end of the day, I want to love the ocean and have a great connection with it and share that with my family and future generations.”