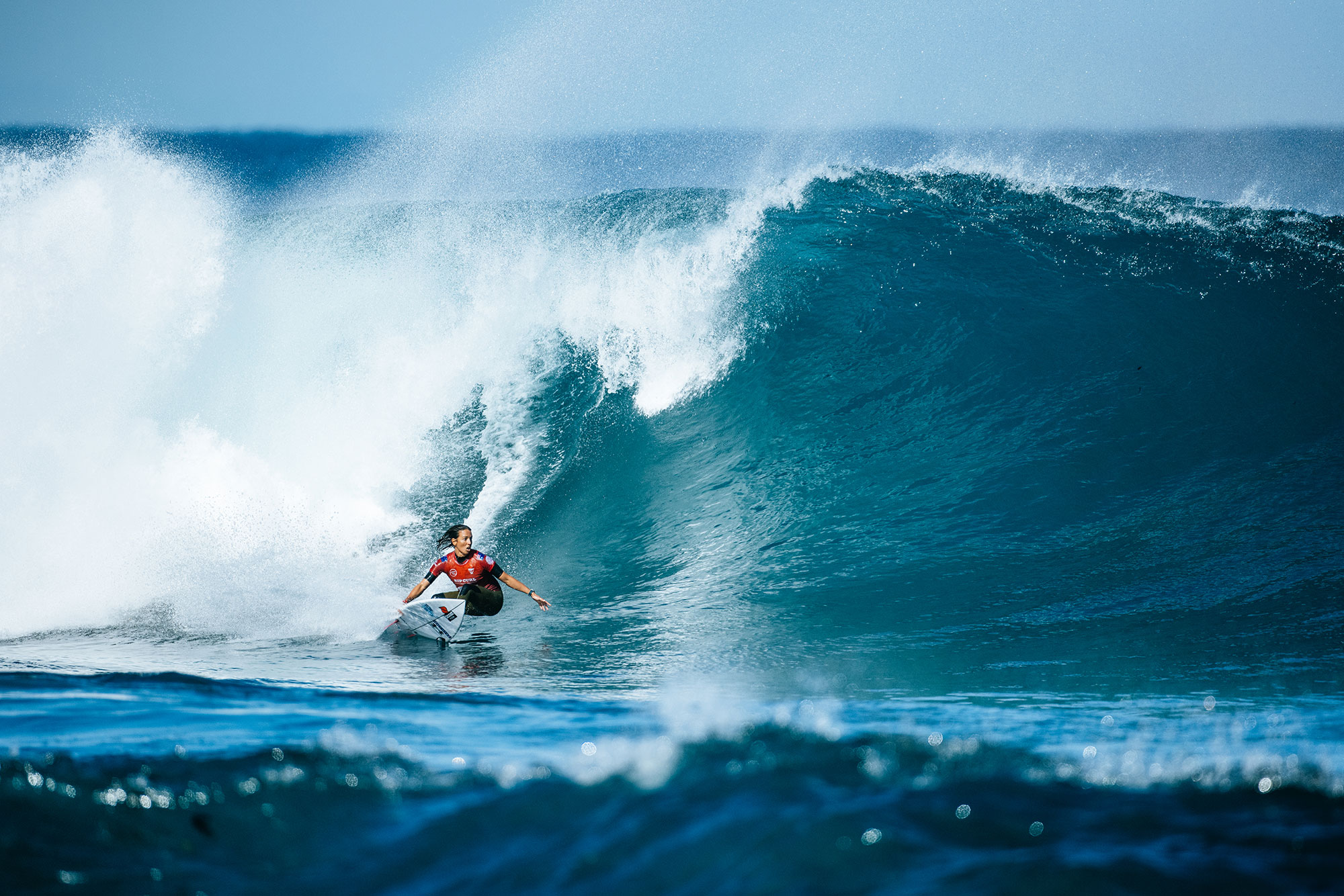 An in-form Sally Fitz and a can’t-be-surpassed Gabriel Medina won the Rip Curl Rottnest Search yesterday at Strickland Bay. The result catapulted Sally into the No. 2 spot on the ‘CT rankings and runner-up Johanne Defay broke into the top 5 bubble. In this last event of the Australian leg, Medina solidified himself as the current World No. 1 and rookie giant-slayer Morgan Cibilic gets himself into the World Title contention. The next Tour stop is the Surf Ranch, where it will be firing and boringly predictable during the entire event window. Continue reading for the WSL’s presser on the Rip Curl Rottnest Search:

Sally Fitzgibbons (AUS) earned her 12th CT victory today after defeating Johanne Defay (FRA) in the Final. The win now puts Fitzgibbons up to World No. 2 on the rankings, behind Carissa Moore (HAW). En route to the Final, Fitzgibbons eliminated two-time WSL Champion Tyler Wright (AUS) in the Semifinals.

“It feels so good to be back in the winner’s circle,” Fitzgibbons said. “I set a goal to be in the Final 5 at the end of the year and I’ve been outside of it for a few events, so it’s amazing to be rewarded for the work. If you give yourself every opportunity, every now and then the planets align and you can come out with the win.”

Fitzgibbons is a 12-year CT veteran who has come in second in the World Title race three consecutive times from 2010 to 2012. Now in 2021, this victory is critical to the Australian’s World Title hopes as this season will host the new one-day format to decide the World Champions with the Rip Curl WSL Finals. Only the Final 5 surfers on the leaderboard will qualify for the Rip Curl WSL Finals, and now at World No. 2, Fitzgibbons is well in the race to take her maiden World Title at Lower Trestles in September.

“I grew up watching the Rip Curl Search events,” continued Fitzgibbons. “So many of them were in lefts, so it’s cool to have one back and it be in a left. I don’t get too many opportunities to use my strength, which is my backhand, and we may never compete back here on Rottnest, so this one really feels like a milestone. It just feels so good, I’m so stoked.”

Two-time WSL Champion Gabriel Medina (BRA) continued his blistering form with his second win this season and the 16th CT win of his career. The Brazilian has made it to four out of five Finals this year and has all but guaranteed himself a spot in the Rip Curl WSL Finals, the new one-day competition to decide the World Champions at the end of the season.

“I’ve loved my time here in Australia and especially Rottnest,” said Medina. “It’s a new place for me to visit and it’s so beautiful. The waves have been great the whole time and we have been so welcomed. This is a very special place and it’s been such a fun event for me. I made it through a lot of tough heats and am glad to win surfing the way I want to surf. I’m so happy.”

Medina saved one of his best performances for last in the Final against rookie Morgan Cibilic (AUS). The Brazilian’s commitment to rail and above the lip surfing, going both left and right, was a perfect match with the punchy walls on Rottnest. Medina’s 15.50 two-wave combination (out of a possible 20) was enough to see him clinch his second Rip Curl Search trophy, almost a decade after winning his first at the Rip Curl Search San Francisco.

“It feels amazing to win another Search trophy all these years after my first,” Medina continued. “This has been such a good start to the season for me and I’m just so happy to keep the momentum going. My wife’s birthday is coming up and she said she wanted the trophy because it’s so pretty, so I’m so happy to have it now.”

It was the fourth time this season Medina and Cibilic went head-to-head, with Medina taking victory in every match-up so far. While Cibilic is still searching for a win over one of the best surfers of this generation, he now adds a runner-up finish to his equal 3rd and 5th placings from earlier this year and moves into the Final 5 on the rankings, whilst continuing to lead the race to the 2021 CT rookie of the year.

“This feels unbelievable, to be honest,” Cibilic said. “Coming into these last couple of events, I’ve come into them with a lot of confidence and a Final hasn’t felt too out of reach, but I guess if you asked me last year if I’d get a Quarterfinal, a Semifinal, and a Final finish from the four Australian events, I would have told you that you were tripping. It feels amazing, so I’m super stoked. I was really nervous in my Semifinal against Liam, probably more so than the Final. He and I grew up competing against each other and have a pretty good rivalry and always want to beat each other. In the Final, I felt ready to go but the waves were slow and Gabby was ripping so not much I could do there. I’m still stoked though.”

Fitzgibbons and Defay are renowned for their confidence and finesse in big, lefthand reef breaks, so it was no surprise to see them meet in the Final at Strickland Bay. In the Final, Fitzgibbons looked unstoppable, finding the best waves of the 40-minute heat and surfing them flawlessly to post a winning heat total of 15.10 (out of a possible 20).

“It would have been good to go one step further, but this is so good to make the Final,” Defay said. “I’m already really happy with my Australian leg, so it’s so good to finish like that. I’m going home now to rest up and get some rehabilitation for my knee and make sure I’m ready for the Surf Ranch and for the rest of the season.”

Although Defay fell short in the Final, she didn’t give up until the final minutes, posting a 7.23 and a 4.00 to almost recapture the lead in the dying minutes of the heat. This Final marked a breakthrough for Defay after three straight Quarterfinal finishes on the Australian leg. Defay now leaves Australia sitting in fifth on the rankings.

“It’s not an easy lineup, but it was so good to have a good left on Tour this season,” continued Defay. “Something that I have learned to appreciate whilst being on Tour is discovering new places, and coming to Rottnest was like that for everyone. It was also a level playing field, which is rare for us on Tour and made it such an interesting event. I’ve had a strong start to the year, so I’m feeling like if I keep the confidence and momentum I have now, I can have my best finish to the year and be inside the top five.”

Wright was unable to find a rhythm in the 35-minute heat, only scoring a 7.64 (out of a possible 20) against a rampaging Fitzgibbons. For Moore, it was a much closer affair with the Hawaiian going down to eventual runner-up Defay by less than one point. Similar to Wright, Ferreira struggled to find a rhythm in his Semifinal against countryman Medina and took a third-place finish, leaving the Aussie leg still sitting second on the rankings.

After an epic run in his first-ever CT event appearance, Liam O’Brien (AUS) was eliminated by good friend and eventual runner-up Cibilic in the Semifinals. O’Brien put on an amazing show over the last week at Strickland Bay and displayed why he will be a permanent fixture on the CT in the near future, leaving Rottnest with an equal third-place finish.

In addition to the highly coveted Search trophies, the Rip Curl Rottnest Search awarded Michel Bourez (FRA) the Rip Curl Search Best Barrel Award. Bourez was awarded a Didgeridoo that was handmade by Ashley Collard and Kelly Collard. The story for the Didgeridoo is about the Rottnest Island bushland that is surrounded by the ocean and waves. The white dots are the stars of the Aboriginal dreaming and stories that are shared on the Island. Within blue ocean are our spiritual Guardians that are represented by the different color dots.

Ashley is a Balardong Nyungar man from Kondinin Western Australia and an artist of 30 years. He was named 2013 NAIDOC Perth Indigenous artist of the year, runner up in the 2013 National Deadly awards (Education category) and winner of the Visual Art Award for the City of Kwinana’s Inaugural Arts and Culture Awards in 2018.

Ashley and Kelly, an artist of 10 years, now produce artworks together, which include paintings on musical instruments, surfboards, kangaroo skins, and clothing. They also create murals for schools and businesses around Perth Western Australia and are musical performers and artists.