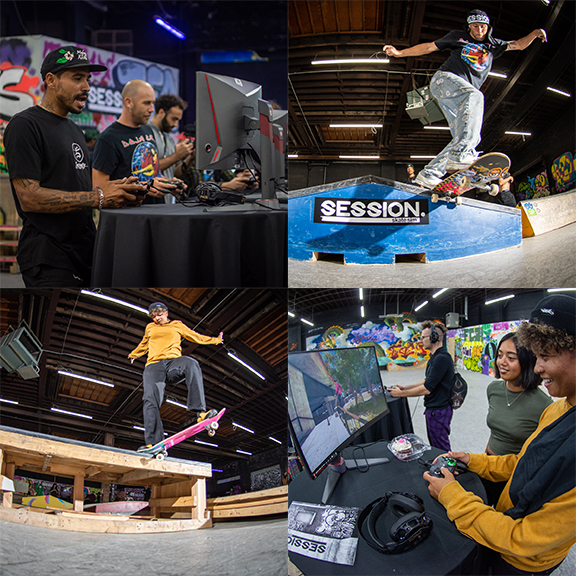 NACON and creā-ture Studios launched Session: Skate Sim this past Wednesday night in NYC. Hosted by Samarria Brevard, Manny Santiago, Dane Burman and Donovan Strain, the VIP event at Substance Skatepark in Brooklyn, NY was attended by the skaters, gamers and the developers. Pros skated, signed autographs, and showed party-goers tips and tricks on playing.

With the feeling of the golden age of skateboarding in the 90s, this realistic skateboarding game was designed by skaters and includes iconic skateboarding spots and cities like New York, San Francisco and Philadelphia. It allows skaters to put together lines of tricks and save the best moments with the video editor.

Now available on Xbox Series X|S, Xbox One, PlayStation®5, PlayStation®4 and PC, Session invites players to dive into the genuine 1990s skateboarding way of life, when each stretch of pavement and each stairway was a great location for your favourite tricks. The game’s ultra-realistic physics bring the sensations of skateboarding to life, and the studio has even integrated ground-breaking gameplay, a first in a skateboarding game: the “True Stance Stick,” where each foot is independently managed using the two sticks. With a learning curve that is just as demanding as in real life, players must practice how to control their board and pull off all the different tricks available in the game, from the simplest to the most complicated. The integrated editing tool lets each player immortalize their greatest achievements on video.