Setting Her Own Line: Elena Hight Talks Getting into the Backcountry in Blank Canvas 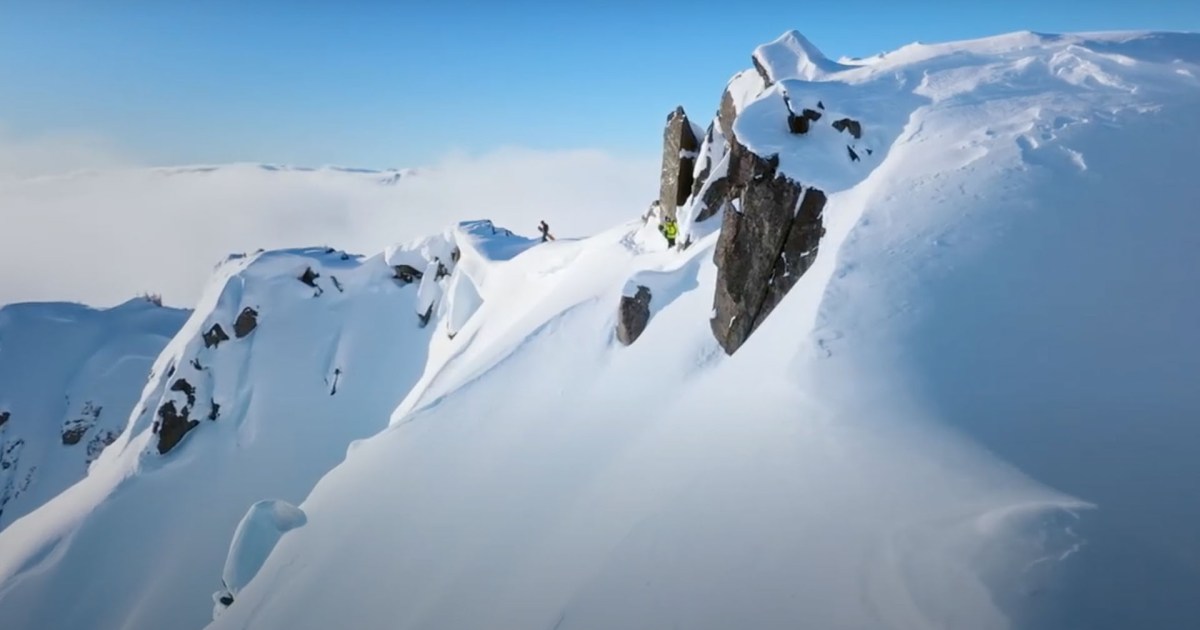 Two seasons ago, Elena Hight pivoted decisively away from the contest scene, eschewing judged halfpipe runs—a discipline in which she was one of the best in the world—and instead setting her sights on the backcountry. It was amidst the iconic peaks of the Sierra where Elena’s love of riding cultivated and for her, it was time to cash in on cliffs, lines, and spines of those mountains—and then some. She set out to document her ascent into big mountain terrain in Blank Canvas, a Teton Gravity Research movie that follows Elena as she navigates unfamiliar terrain, increasing her experience and growing her confidence with every line she takes. Turns in the deep and fluffy of Tahoe, Japan, and British Columbia alongside Hana Beaman, Travis Rice, Jake Blauvelt, Sammy Luebke, Nick Russell, and Danny Davis highlight both the triumphs and trip-ups of riding and filming in the backcountry—a showcase that is truly authentic. At its core, while Blank Canvas is about Elena stepping into an unknown, taking a leap of faith and going in a new direction, it reaffirms what we have always known about this accomplished individual: Elena Hight always lands on her feet. In the final section of the movie, Elena trades turns with Blauvelt in BC, powerful, fluid, and stylish as ever—and only getting started. – Mary T. Walsh

Blank Canvas chronicles the past two seasons as you made the transition away from the contest scene and into the backcountry. You say in the beginning of the film that it’s hard to know when to leave something that you are familiar with and branch out into the unfamiliar—i.e. stepping away from the contest arena, where you were still competing at the highest level. What was the catalyst where you decided to make the leap?

The main catalyst for me was the trip I went on with Jeremy Jones for his film Ode to Muir. Prior to that trip I had dabbled in a few backcountry trips, filming (or attempting to film) here and there. I really loved it but couldn’t quite wrap my head around how to really make it happen and just continued to get pulled back into what I knew, which was competing. After the Ode trip I just had this realization. If I don’t at least try, then what? If not now, when?
The first season that you filmed for this project, Tahoe had a record-breaking winter—kind of the perfect time to step out into the backcountry in the Sierra?

The snowfall in the Sierra lining up with this film was so serendipitous. I had always dreamed of what Tahoe must have been like back in the day when winters like this happened year after year—what it was like when all my favorite old films were being created in these mountains. Being able to step into that and also be documenting it for this film was literally a dream come true.

Growing up in Tahoe has shaped you significantly as a rider. What was it like finally getting to tackle the natural terrain—much of it iconic—around your home?

Tahoe really has shaped me as a snowboarder. Having access to so much variety at a very young age really helped me become the rider I am today. Riding parks and pipes all around the lake at different resorts and then learning to ride powder and being so immersed in it gave me this appreciation for all types of snowboarding from the very beginning.

I remember watching all the old Standard and Mack Dawg films and being in awe of the riding that was in Tahoe. Before I was able to get out and explore much of it, I got sucked into the contest scene. So to be able to come back this year and head into these zones that have been inspiring me on films since I was a young kid was such a treat.

You spent a lot of time riding in the Sierra with Danny Davis, Nick Russell, and Sammy Luebke. What has it been like exploring, riding, and learning with them?

Riding with Danny, Nick, and Sammy in Tahoe were some of my favorite days because they were all so excited to be having this banner year in Tahoe. We all have been living in Tahoe for a long time and have known each other since we were little, so it was a pretty unreal reunion of sorts. Then, to be able to tap into some of the zones they had been dreaming about and scoping for years was beyond exciting. When you get to just join the crew and tag along in a situation like that, it’s like having access to a secret book of knowledge. They were all also so welcoming and fun to shred with. It’s pretty unreal watching these guys shred in person; they literally all blow me away every time they step on a snowboard.

You are the first woman to ride the infamous Grizzly Spines, pioneered by Jeremy Jones, who you mentioned has been a very influential person for you. This is a very impactful moment in the movie. What was going through your head as you stood on top of the spines before you dropped in?

Well, I was thinking, What the f*ck did I get myself into! I had told the crew earlier in the month that if Grizzly filled in, I wanted to go there. But honestly, I didn’t actually think it would happen. It needs a lot of snow and it’s low elevation, which makes it even less likely. When it all actually came together and it finally was time to drop in, it was all I could do to just breathe! That was definitely the most consequential line I have ever ridden, and the nerves were real.

One of the things that is so interesting about exploring the backcountry is how unique different mountain ranges are. In Blank Canvas, you ride in Tahoe, Japan, and British Columbia, three incredibly different and unique zones. What was it like riding in these different places in terms of your experience riding, navigating the terrain, and learning more/growing your experience?

One of the things that draws me and many riders into the backcountry is that no two mountains are the same. That the snow and conditions are always changing, so the element of creativity and exploration is always there. Each of these locations lends itself to a different type of riding, but the rider’s interpretation and creativity in each place still shines through. All these zones may be vastly different, but ultimately require similar skillsets as far as understanding how to navigate terrain, move around in deep snow, take safety precautions and then work with the filmers to capture the snowboarding. I learned so much in each location, and being able to ride with different riders in each place also helped open my eyes to so many different ways to approach the mountains.

Throughout the movie, you are humble about showing the learning curve of riding complex, backcountry terrain through a fall off a pillow or when sending a cliff. Why was it important to you to include those moments in addition to the stomped tricks and smoothly navigated lines?

The motivation behind this film was to make a fun, inspiring shred flick, but also be able to leave the viewer with a message and a take-away. I wanted this film to be real and raw. To speak to anyone who has taken a leap of faith to follow a dream and fumbled along the way. Or to anyone who is afraid to take that leap at the risk of failure. My hope is showing throughout the film that taking a leap of faith to follow your heart is scary and hard, and probably involves some failures. That it is not rainbows and butterflies all the time, but that the hard work and learning is part of it. It’s easy for any of us to think that these transitions in life are easier for other people because of what we see from the outside, and often times that makes us shy away from taking those risks. I wanted to share my real challenges in hopes that it makes those risks and failures less intimidating for others to tackle in their own lives.

What was a challenge that you encountered while filming the movie and how did you push through?

This film was a challenge every step of the way. I think one of my biggest hurdles was getting over my own ego! Having someone film you while you fall and flail and fail is humbling, and honestly, can be defeating. I let myself get defeated, especially in the beginning. Getting over that and realizing that I truly was learning a lot of new skills and encountering a lot of new terrain, was and still is a challenge. But, I definitely can tell you when you get out of your own way and stop judging yourself so much, things get easier somehow!

What was a highlight (or highlights plural, of course!) while filming for the film?

So many highlights from the making of this film. Literally the entire trip in Japan—one of the funniest and most memorable trips I have ever been on. A few spectacular sunrises in the Tahoe backcountry with that crew that I will never forget. The banner sunny days I got in BC with Jake. Those were the type of days that we live for.

The final section of the movie features you and Jake Blauvelt riding in British Columbia. Your lines are fast and smooth—you look incredibly comfortable and fluid on the terrain. How do you feel your line selection, riding, hitting features, etc. has evolved over the past few seasons as you continue to push yourself further in the backcountry?

Well, thank you! I feel like my riding has progressed so much over the past few years. I feel like I am beginning to learn my strengths and weaknesses in the backcountry and that is helping me choose lines and features that play up my strengths when I can. Confidence, or lack of confidence, in the mountains really shines through when you are on a snowboard and I think my confidence in myself in this bigger terrain is just growing with the more time I spend out there.

In the beginning of Blank Canvas, you say, “It’s very nerve-wracking walking away from what I’ve done for the past fifteen years and going to this avenue that I have a lot to learn and no real idea if I’m going to succeed or fail, but I feel like just the experience is worth taking the leap.” Looking back at the past two seasons, where is your head at with your snowboarding right now?

Looking back on the creation of this film over the past two seasons, I am just so grateful for the opportunity to pursue this path, for the people who have believed in me along the way and for snowboarding for giving me a passion to pursue. I am excited about what the future holds. I feel like a grom again, with a whole lifetime of learning ahead of me. My love for snowboarding and the mountains has been completely reinvigorated. I think it’ still to be determined if this path leads to “success” or failure, but what a great ride it’s been and will continue to be!