Tall, tanned, and talented af, the classically elegant Hawaiian longboarder is far more than meets the eye. Multiple World Longboard titles. Check. North Shore native. Yup. Graceful, kind, good-natured. One hundred. Twenty-one-year-old Honolua Blomfield embodies all those things, always. With formal surfing on hold for the time being and travel limitations in place, we decided to check in with O’Neill’s favored longboarding lady. In an exclusive interview with Blomfield herself, Freesurf went beyond the accomplishments that brought her fame – her countless wins and blatantly obvious supreme ocean ability – and got a peek into Blomfield’s fleeting moments of life beyond the board. The queen of quintessential wave-riding style opened up to us about her other lesser-seen sides: her strong connection with her rad fam, her laundry list of surprising hobbies, childhood summers spent with her grandparents on Maui, and her vision for the future. It shouldn’t come as any sort of shock that this talented wahine left us even more impressed than we already were. Here’s why: 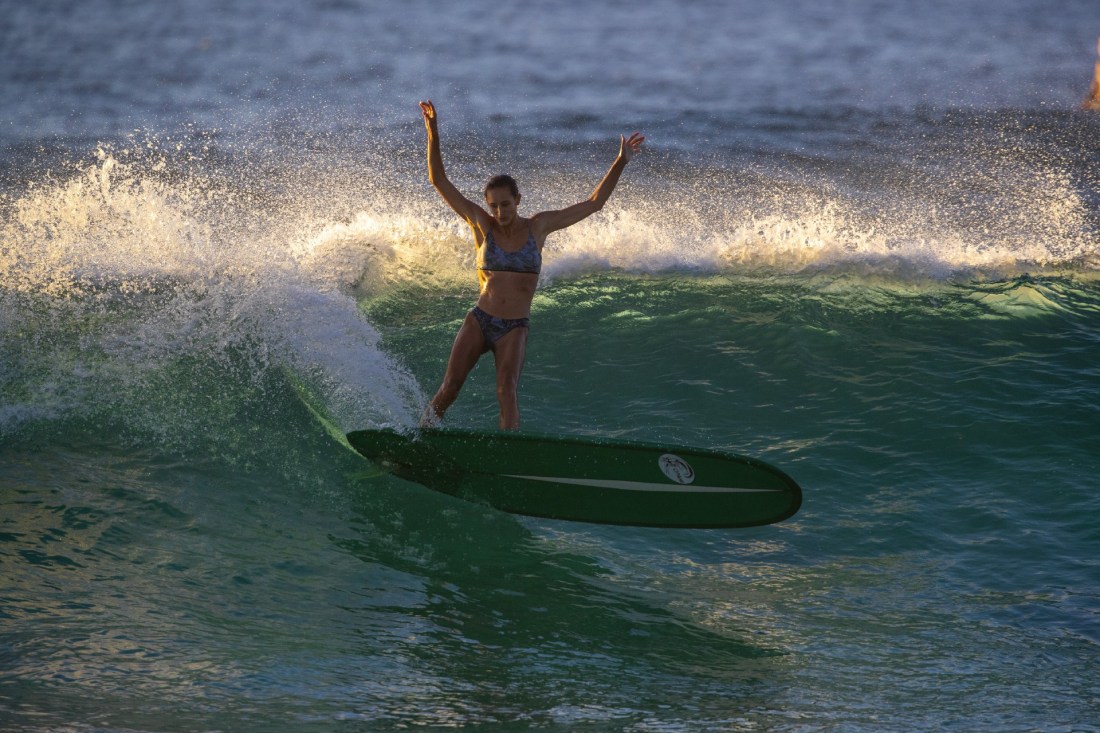 Her go-to board:
When it’s small I ride my 9’3” Dead Kooks. On a little bit of a bigger day, I’d ride my 9’9” Two Crows. So depending on the day, I just check out my window and that determines what I ride.

She has always known that she wanted to go pro:
I did my first contest and was like, ‘Shoot, I wanna do this!’ I knew I wanted to be a pro at, like, seven years old. I was so competitive, loved to surf, and wanted to compete, always. What’s interesting about me is that I’ve never got nervous in a contest before, and that is truly a blessing because nerves are half the battle in contests!

She has always looked up to her older brother:
I definitely learned a lot from my brother when we were growing up. I always wanted to be like him, so that’s where a lot of the [interest in] dirt biking and jiu jitsu and surfing came from. I was always trying to keep up with him. My mom would take him out at Ali’i’s and I’d be like, ‘Mom! My turn! My turn!’ because I saw him doing it. When I was little, I thought I was a little boy, too. It’s so funny because now I’m so girly, kind of. Still, it’s nice to have that background because I can do kind of everything but literally, it is all thanks to my brother – I will say that.

In the Blomfield family of six (Mom Lynne, Dad Kolohe, and the four siblings – two boys, two girls), Honolua is the second oldest.
I’m definitely the peacemaker of my siblings. If two of them are fighting I break them up or talk them out of it. It’s actually really important during this time! 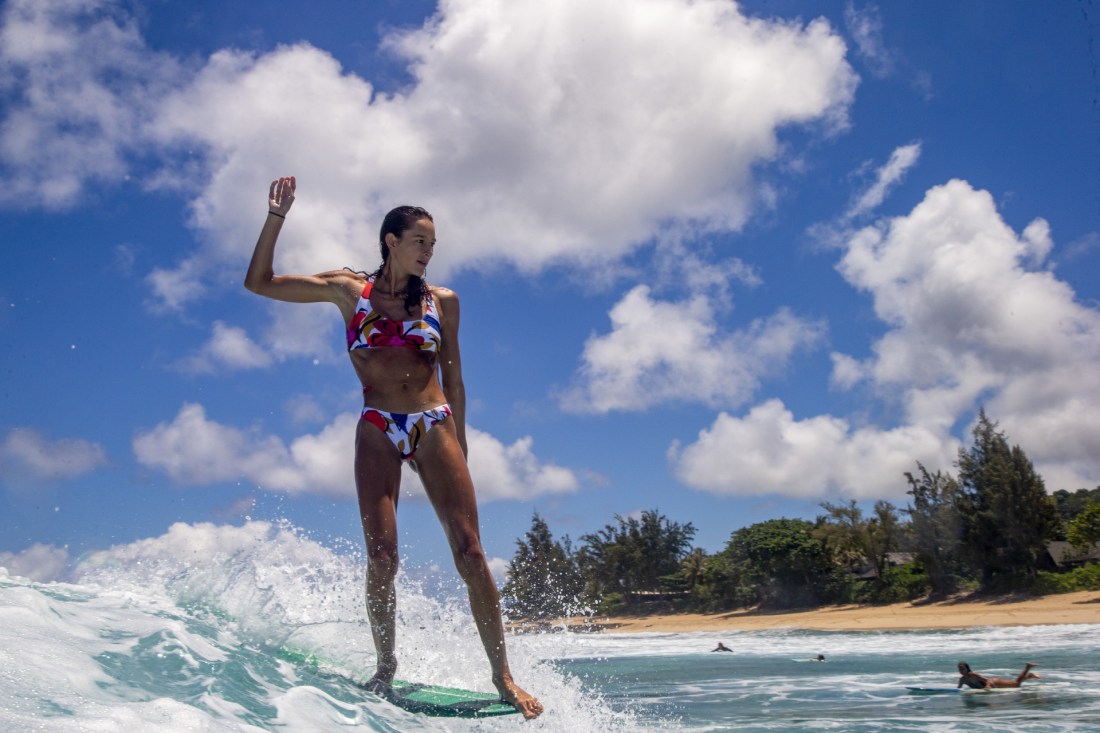 Boardsports seem to be her signature thing. She skates and snowboards:
I started skating [at Banzai Skate Park] and we had a quarter pipe in my garage. When I was little, I was always hanging out with boys – my brothers and cousins and godbrothers. That’s how I learned to skate. I think I dropped in at a young age, too. For Christmas one year we got a half pipe in our yard, so I guess it just did come naturally but it’s also because I started at a young age.

She can catch dinner, too:
I have been going fishing with my brothers more often – just my two brothers and I. They catch a lot more than me. I’m not very good, but this pandemic I actually caught five fish on one pole! There’s this rig that has five hooks and I hooked up on all five of them! That was an accomplishment! We actually ate the fish too!

The soft-spoken surfer isn’t afraid of a little mud and speed either. She’s a lifelong dirtbiker:
I rode my first dirt bike, it was my brother’s, and we still have it to this day! I was three and I was too small to reach the ground so my mom would put me on the bike and I’d ride around in a circle in the yard and she’d have to catch me. They trusted me because I learned how to ride a bike when I was two, so they were like, ‘Well, okay. If she can peddle her own bike, I’ll let her do this.’ My mom or my grandpa would send me around their yard on Maui and my mom or my brother would catch me. 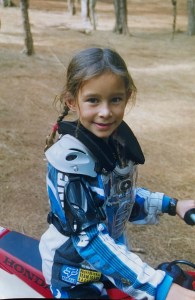 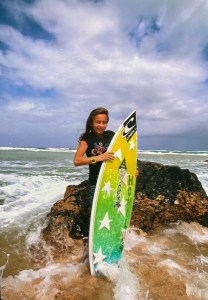 She may be a girly girl, but she’s an empowered girly girl:
Dirt biking makes me feel empowered, you know? I guess that’s how I’d put it. Surfing also makes me feel empowered, but… it’s hard to explain, isn’t it? I think it’s more of the like, ‘Oh she’s a girl, but she can do a wheelie on a dirtbike.’ Like, what the heck? That’s so not normal, you know? And I think I like that. [Some people will] just think you’re some girly-girl and then to realize, like, ‘Oh she can surf; she can shortboard…’ This and that, you know? It makes me feel very good and, I dunno… strong. Strong women, right?

She does what she loves and loves what she does:
All this stuff, it wasn’t forced upon me. I just loved it; I loved being outside and doing things that girls normally wouldn’t do.
When I’m on the road, I’m always like, ‘I miss home’. Ten different contests a year, you’re gone every month of the year, so when I was gone it was always like ‘Oh, I want to be home.’ But now that I’m home, I realize why I’m a pro surfer: I actually love traveling. I love competing. And I’m like, ‘Whoa,’ – I really miss it.

She’s spending these pandemic days at her family home on the North Shore:
I’ve just been surfing, but that’s nothing different from my normal life because – I know it’s bad – but I don’t really do any training or working out or yoga or anything. I occasionally will hike the bunker, but other than that I just kind of surf or play in the yard with my family. Actually, my siblings and I have been playing a lot of football. And… what else…? Oh! Hula hooping! Just funny games, but I swear, it’s like a workout keeping up with all them! If anything, this pandemic has taught me a handful of new skills!

She’s thinking ahead and, like most of us, she’s got big plans:
I’ve been thinking about things I’m going to do that I was holding back on. I really wanted to go snowboarding this year and I was like, ‘No, I shouldn’t.’ But nope! [COVID/stay at home order] has really given me the motivation to be like, ‘You know what? I’m gonna go!’ It’s actually kind of cool because now you can gather your thoughts and make a plan for the future… it really sucks what’s going on the world but hopefully this will all be over and we can get back to our normal lives!