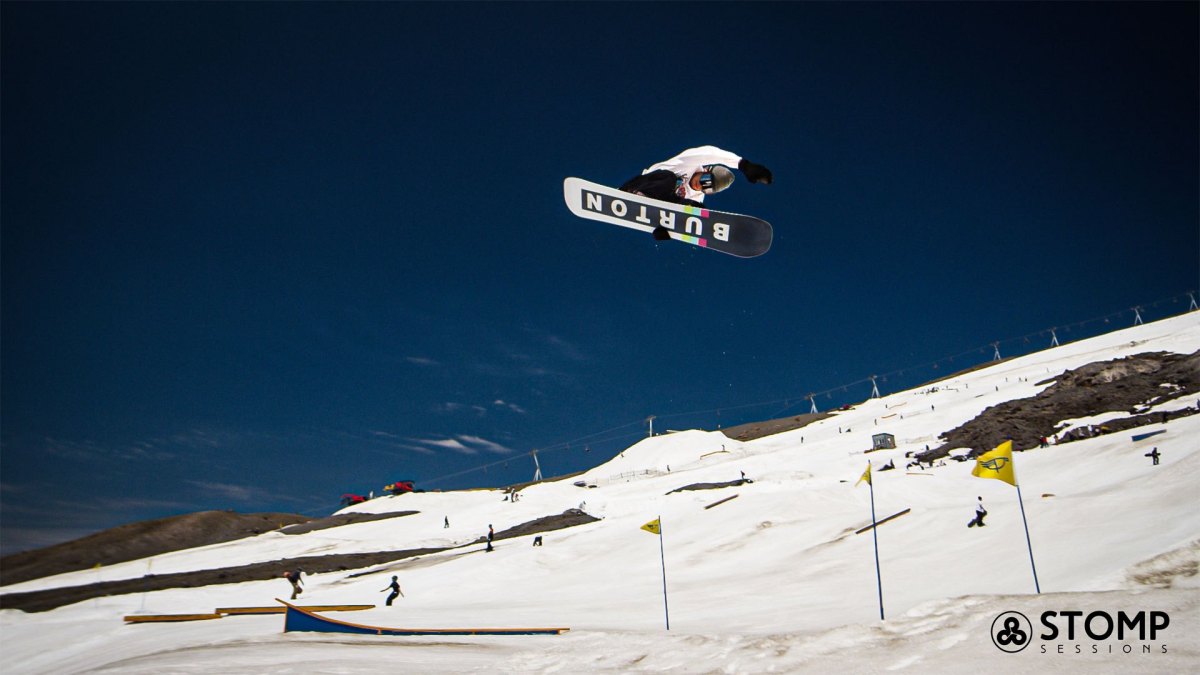 Stomp Co-Founders Ryan Williams and Dave Downing both have a significant history with SNOWBOARDER Magazine, having been featured in interviews within the magazines pages, in SNOWBOARDER movies and at Superpark events during their pro careers for Burton in the ’90s and early aughts. The pair have teamed up again for a new venture, Stomp Sessions, a video tutorial series designed to help snowboarders of all skill levels with everything from trick tips to board setup, and generally have a better experience on the mountain.

They’ve enlisted the help of pro snowboarder Brock Crouch to round out a series sharing Dave’s decades of snowboarding experience and know-how alongside Brock’s modern trick mastery. We spoke with Dave to learn a little bit more about the launch of Stomp Sessions and what viewers can expect.

All right, you really need no introduction, but can you give us a quick catch up on what you are up to these days?

I’ve been with Burton Snowboards for 30 years. I started in the early ‘90s as a snowboard rep, then was blessed to become a team rider for Burton and travel the world filming and capturing snowboarding content. My goal was to make snowboarding look fun. The last 10 years or so I’ve been working with Burton sales/marketing in North America. I work with a lot of the reps and retailers, and also people at Burton in product. My main goal is to continue Jake’s legacy of the sport of snowboarding and Burton. My wife, Shannon Dunn Downing, and I are raising our two sons, Logan and Dillon, and love snowboarding a lot.

When did you start working with Stomp Sessions? How did that relationship come to be?

The CEO of Stomp Sessions Ryan Williams used to ride for Burton in the ‘90s, and he reached out to me a few years ago. I’ve been involved in an advising role with other sports, like skateboarding, mountain biking and surfing. We always wanted to do snowboarding and that came to fruition this past spring during COVID craziness. Ryan believed in me, that I could direct and produce the content quickly, and that’s what we did. I’m stoked to have the snowboarding Stomp Sessions launched. I hope people are stoked, become members, and learn about the sport I love so much. It’s basically the price of your favorite coffee at Starbucks for a Monthly Membership and I think there is some amazing content for members. Brock did such a good job with the trick tips, and I hope kids are stoked to watch them and learn.

Have you known Brock for a while? How did you two end up connecting on this?

I’ve actually known Brock since he was like 5 years old. I’m good friends with his dad and mom—they go to the same church here in Southern California. His dad, Dan, reached out to me about Brock, like, “Hey, my kid is pretty good at snowboarding and is 5 years old.” I’m like, “Ya, I’ve heard that before!” But when I saw him ride, I was tripping on how he could turn and was really good at riding his board. We became good friends, and I’ve had the opportunity to take him out in the backcountry a bunch and get his feet wet. Brock surfs so well, and is a really good skateboarder, too. I think he is the best at all three sports, for sure. He’s the California Kid.

What makes Brock a good rider for this sort of instruction?

Brock is really fundamentally good. He has been coached by great coaches over the years and now, as a very accomplished snowboarder, he can break down a trick and talk about how to do it proper. There are a lot of little things you can do to make tricks easier and he seems to get that. Brock is really good at basic tricks, as well as all the hard, multi-spin tricks. As a young person, just 21 years old, I’m proud of the way he can handle himself and break down a trick and explain it.

In Stomp Sessions, you will be covering more than just trick tips, right?

Yes, I already did 10 tutorials that are “theory” based, where I share things I’ve learned over the years with product. Hopefully people will watch them and learn how to get the right type of snowboarding products to help them have a good experience. I am also going to be doing a lot of on-snow tutorials to help people improve their snowboarding, at resorts and also in the backcountry. I’m just hoping to share my knowledge that I’ve learned over the last 30 years. I’ve learned a lot of things from some amazing people and I want to pass that along.

Will the series only feature beginner tricks, or a wide range of tricks and general snowboarding knowledge?

We have already produced trick-based tutorials with Brock that range from pretty basic to more advanced tricks. There will be more athletes coming on and more tutorials ranging from basic snowboarding to high level advanced tricks.

When and where will these be released?

New content is released monthly in each sport. There are also awesome opportunities to get digital coaching. You can send a video of yourself doing a trick snowboarding to Brock or myself, and we will evaluate it and give you direct coaching on how to do the trick better, or maybe just advice on how to change a bad habit you might have. As I mentioned, the goal is to help people get better at snowboarding and have a good experience.