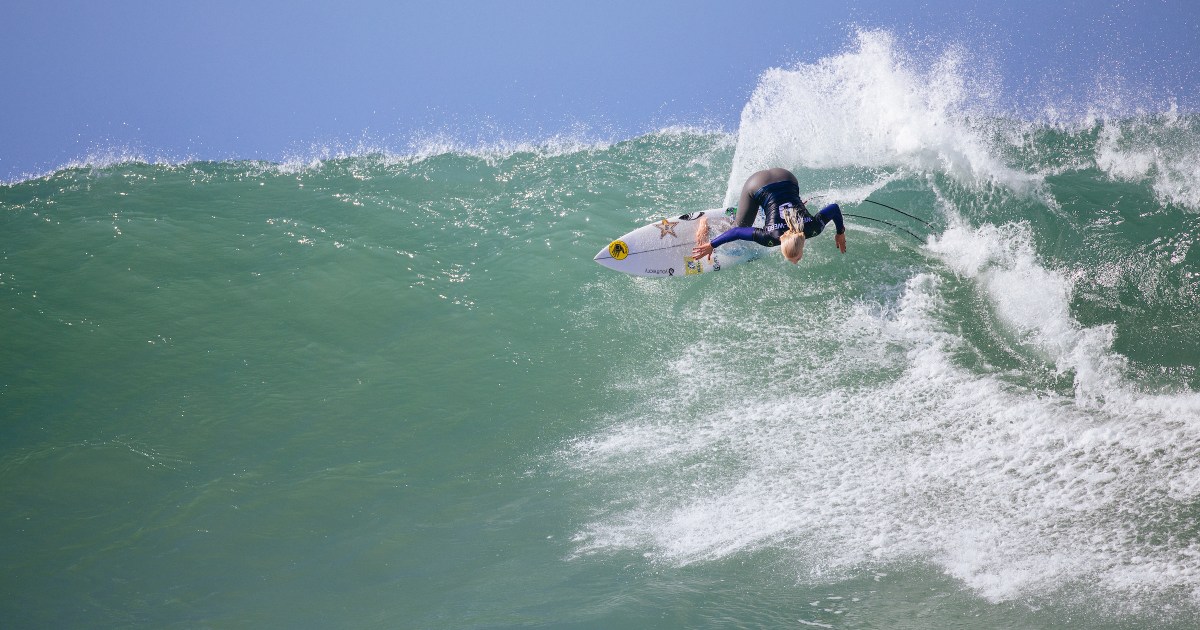 After a competition window of near non-stop pumping waves, the Corona Open J-Bay is officially done and dusted, with Ethan Ewing and Tatiana Weston-Webb taking well-deserved victories and an extra chunk of points going into the penultimate event of the season. Hit play above for the best of the best from finals day and continue reading the WSL’s recap below:

The competition embraced two new winners, Weston-Webb, the first female goofy-foot to claim victory, and Ewing, who earned the first CT win of his career.

Ewing had a stellar run through the early rounds in J-Bay, facing major opposition in South African Matthew McGillivray (RSA) and Jordy Smith(RSA) as well as Yago Dora (BRA) to reach his first-ever Final on the CT. The stylish regular-foot from Stradbroke Island peaked at the right time on Finals Day where he posted his biggest scores of the event. In his third year on tour, Ewing seems to have finally found his recipe for success as he posts a huge result that will see him move into third on the rankings.

“I’ve been so inspired by Jack (Robinson) this year, he’s had really an incredible year,” Ewing said. “I hadn’t had a win yet but coming here I didn’t put any pressure on myself. Jack started well and I tried to keep my composure. I still feel like I had a lot left in my tank, but this event is one of the dream events to win, so it feels incredible.”

“It’s been such a good year for me,” Ewing continued. “My first year on tour I got so smoked and last year was kind of a warm-up but I feel like this year I’m really showing my surfing and feeling comfortable. Going to Chopes next, I haven’t spent too much time there but I’m looking forward to the rest of the year.”

Robinson absolutely nailed his first wave of the Final with a variety of carves and vertical hits on a drainer down the Supertubes point to claim an excellent 8.83 (out of a possible 10) and take the upper hand early on. Ewing answered with a wave that seemed lacking sections at first but offered him a great opportunity to score major maneuvers down the line, scored 7.17 by the judging panel.

Both surfers wasted no time to back up their first scores, with very different approaches to surfing the long rights of J-Bay. Ewing continued with razor-sharp carves while Robinson went with dynamic, fin-drifting turns into the lip. Ewing got the nod on that second exchange with a 7.67 against Robinson’s 6.93 but the West Australian kept the lead of the heat.

Ewing continued to flare up as he found another gem in the J-Bay lineup to push every single turn harder and post a massive 9.13 to move into first. Robinson kept his head up and fought back but came up shy on his next few attempts and Ewing claimed his first CT win.

Robinson’s sophomore year on tour has been a dream run, collecting back-to-back wins in his home state of Western Australia and G-Land, as well as a handful of good results that see him cement his second spot on the rankings and clinch his ticket for the Rip Curl WSL Finals.

“It’s nice to hear that,” said Robinson. “We keep working for it and trying to get the best position I can, so I’ll keep on working. It felt good to be back in South Africa, I just had a good feeling as soon as I got here.”

In her seventh season among the world’s best surfers, Tatiana Weston-Webb (BRA) comes off her strongest showing, ranked second in the world in 2021, and trying to make the rankings Top 5 for a fighting chance at the World Title again.

“I love surfing on my backhand, a lot of people know that, but it’s just been a while since I’ve put it all together and had things go my way,” Weston-Webb said. “This event I just really felt in rhythm and flow and the whole time I was just having a blast, maybe that’s what set me apart.”

With a win early on in Portugal, a couple of Semifinals in G-Land and Rio and her win today, the Brazilian holds the right cards as the tour heads to Tahiti where she has spent time developing a relationship with the Teahupoo lineup. Today’s result will see her move up to third on the rankings before the CT’s final stop.

“We had such perfect waves for this event and I’d like to thank the locals for sharing their lineups with us for a week, it was just phenomenal,” Weston-Webb added. “I’m really excited for Teahupoo but right now I’m just living in the moment here at J-Bay.”

The women’s Final started with fireworks from the get-go, both surfers opting to go on the very first set that came through, and rewarded with similar high-7 scores. Weston-Webb was first to get a second opportunity, starting on a bomb and applying her radical, under-the-lip backhand turns for an excellent 8.50 to pressure Wright.

Weston-Webb continued to build momentum and shredded another big right with incredible control in the critical sections to post a 9-point ride, pushing her opponent against the ropes as Wright needed either a perfect 10-point ride or two new scores to regain the lead.

The two-time World Champion fought back around the 10-minute mark, finding a good wall to work with and combining long-arching carves with powerful snaps all the way to the closeout section. Wright earned an excellent 8.17 to bring her requirement down to a 9.33 with only a few minutes left on the clock. Time ran out without any more opportunities coming through the lineup and Weston-Webb claimed a career-fourth win on the Championship Tour.

“Runner-up is good, there’s a lot of hard work that went into that,” Wright reflected. “Tatiana was really for me the standout of the event, she put so much work in. I knew I had my work cut out for me but honestly a second, from where I started my week to where I ended up is a huge improvement.”

A veteran on the CT where she has spent 11 seasons competing, amassing an incredible 14 wins, Wright had a solid start to her 2022 campaign for a third world title but was injured and sat out the last two events. Coming into South Africa ranked 10th in the world, Wright’s runner-up finish bumped her up to 7th position, with still a mathematical chance to make the Rip Curl WSL Finals at Trestles.

Wright had previously eliminated the 2018 J-Bay winner and seven-time World Champion Stephanie Gilmore (AUS) in their Semifinal matchup. Gilmore’s wave selection was uncharacteristically off and she only put her first good score on the board after more than 30 minutes in the lineup. She eventually ran out of time to try to overcome Wright’s lead and placed equal third but held onto her position as No. 4 on the rankings.

In the second Semifinal, five-time World Champion Carissa Moore (HAW) made a priority error midway through the heat and with a discarded second score, her mission to overcome Weston-Webb quickly became impossible. Weston-Webb increased her lead and shut down the heat, advancing to the Finals and perhaps got revenge over Moore who defeated her at the Oi Rio Pro. Moore will continue to wear the leader’s yellow jersey heading to the Outerknown Tahiti Pro.

For highlights from the 2022 Corona Open J-Bay, please visit WorldSurfLeague.com.