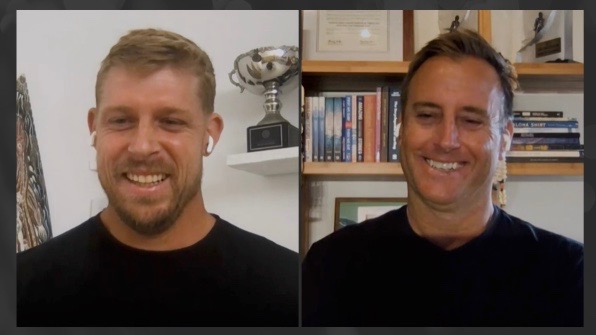 In this new weekly show, three-time World Champion Mick Fanning and Momentum Generation icon Ross Williams will face off with explosive takes, unfiltered opinions, and bold predictions. From overscored waves to underperforming surfers, to the surf industry at large, no subject will be off-limits.

“We know that surfers love to have their own friendly debates, but from a content perspective, it’s hard to find mainstream surf personalities actually talking about it in the open,” said Ryan Holcomb, WSL Studios, Executive Vice President. “Getting Heated provides surfing fans with truly unfiltered takes about surfing’s most interesting topics from the most respected names in the sport. Mick and Ross each have incredible insight with unique and different perspectives that make them a dynamic duo to watch debate all things surf. In this series, they are encouraged to talk about anything that surfers would want to talk about – there will be no guard rails.”

“This new show is different from existing formats because we are not holding back,” said Williams. “We’ve been given the opportunity to share our unfiltered thoughts, and I am excited for the debates that will go down with Mick. We’ve been friends for many years, which should reflect in our willingness to speak our minds freely and have fun with juicy topics. This would be a conversation we would have on the beach watching live surfing go down, but now recorded for the fans to watch and listen.”

The premiere episode is now live on WorldSurfLeague.com. Future episodes will drop every Friday at 9:00 a.m. PST.

Established in 1976, the World Surf League (WSL) is the home of the world’s best surfing.

A global sports, media and entertainment company, the WSL oversees international tours and competitions, a studios division creating over 500+ hours of live and on-demand content, and via affiliate WaveCo, the home of the world’s largest high performance, human-made wave. Headquartered in Santa Monica, California, the WSL has regional offices in North America, Latin America, Asia Pacific, and EMEA.

The WSL annually crowns the men’s and women’s surfing World Champions. The global Tours and Competition division oversees and operates more than 180 global contests each year across the Championship Tour, the development tiers, including the Challenger, Qualifying and Junior Series, as well as longboard and big wave properties.

Launched in 2019, WSL Studios is an independent producer of unscripted television projects, including documentaries and series, which provide unprecedented access to athletes, events, and locations around the world. WSL events and content are distributed on linear television in over 743M+ homes worldwide and across digital and social media platforms around the world, including WorldSurfLeague.com
.

WaveCo includes the Surf Ranch Lemoore facility and the utilizing and licensing of the Kelly Slater Wave System.

The WSL is dedicated to changing the world through the inspirational power of surfing by creating authentic events, experiences, and storytelling to inspire a growing, global community to live with purpose, originality, and stoke.