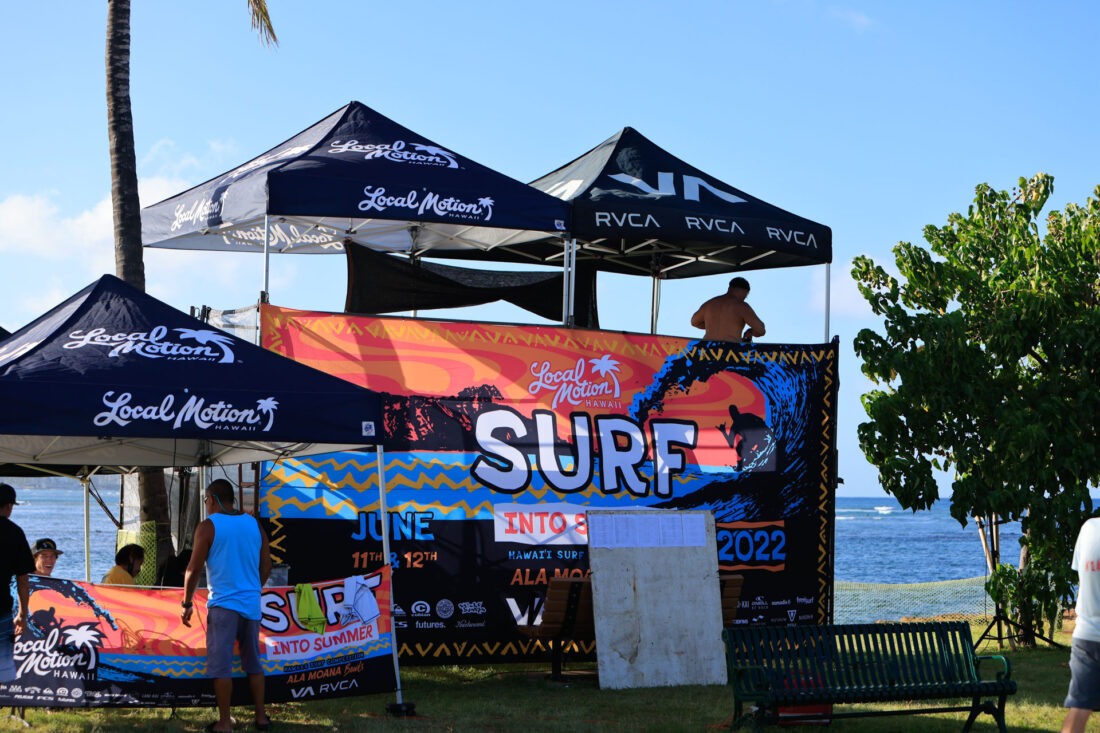 Local Motion’s Surf into Summer made a triumphant return to Ala Moana Bowls after being canceled in 2020 due to the pandemic. Nearly 200 seasoned amateurs and competitive weekend surfers from around the island came to compete in the event, and their families and friends came to support them. The contest was held at Magic Island, and people enjoyed playing yard games and talking story while they watched the surfers. It was a great event for everyone involved, and it was wonderful to see it return after such a long time away.

The event was graced with sunny skies each day, but the surf struggled to fill in consistently. Perfect summer conditions- albeit small, inconsistent swell- provided a fun yet, challenging playing field for the contestants. With waves ranging from waist to chest high, athletes made the most of what they got, demonstrating adaptability by having to adjust to underwhelming conditions.

The contest may have been held in challenging conditions, but that didn’t stop the surfers from putting on an impressive show. Both the men’s and women’s shortboarding divisions saw some excellent surfing, with many surfers finding high-scoring opportunities through their wave selection and skillful board work. The waves were small, but the surfers who were able to make the most of them really stood out. It was great to see such creative and committed surfing across each division.

Hawaii Junior Surf Team Competitor, Kai Martin, believes that smaller waves can be harder to surf well, compared to bigger ones. Despite the challenge, he was able to place first in the Jr.’s Shortboarding division. Following him in second place, was fellow Hawaii Junior Surf teammate, Shion Crawford.

Naturally, the longboarders took more favorably to the smaller waves, styling along the face and dancing gracefully to the nose. The division saw some amazing nose rides and it was great to see how they made the most of the smaller waves. It just goes to show that you don’t need big waves to have a good time surfing. Sometimes, it’s all about making the most of what you have and enjoying the ride. In the end, it was Daniel Uchimura and Pasiance Kalei who took home first in the men’s and women’s longboarding divisions, respectively.

Commentator, Ryley Snyder, says “It’s so good to be back. It’s crazy to see how much the kids have progressed. There’s been a lot of time out of the water, out of the competition season, and you can tell the kids are so hungry for it… The Local Motion Surf into Summer contest means a lot after a couple of years. It’s just a great camaraderie. Kinda sets the tone for, you know, who’s been putting in the time, who’s been progressing. And it just kinda sets the stage for who’s looking good going into the summer.”

It was an amazing sight to see everyone back together for this event. Magic Island was abuzz with activity as friends and family gathered to show support for the competitors and enjoy quality time together. The atmosphere was electric as friends and family cheered on the competitors. Well done to everyone who took part, and thank you to everyone who came out to support them! The event was a great success, and it was wonderful to see everyone enjoying themselves. And a special thank you to Local Motion for making this event possible, we can’t wait to do it again next year!