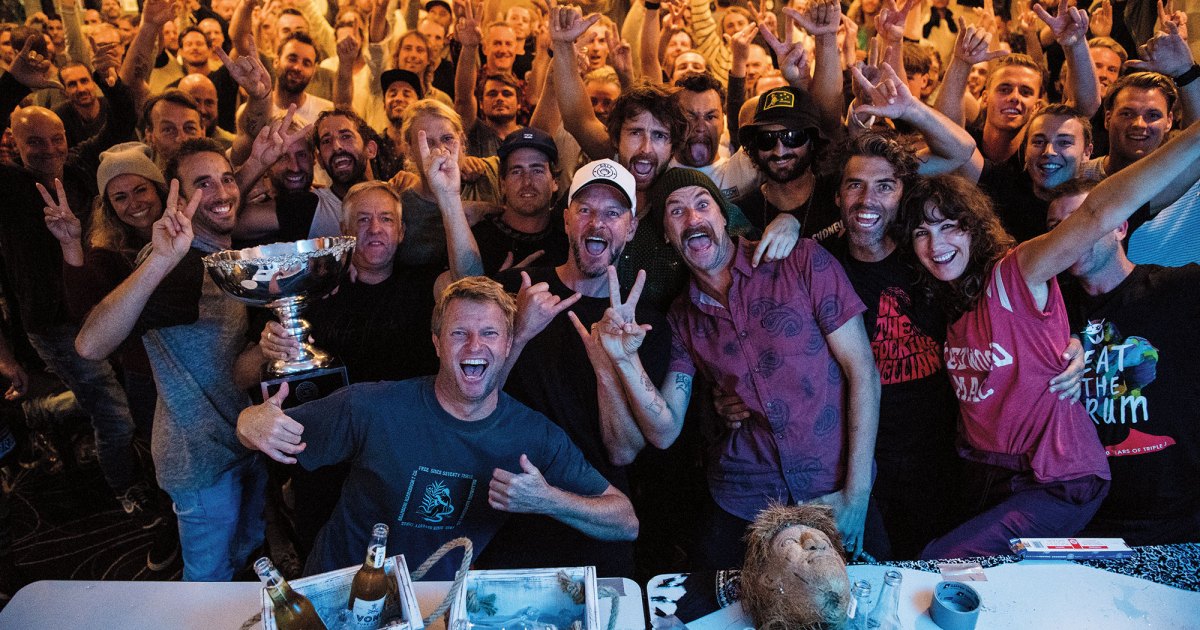 For the past half-century, surf entertainment has mostly consisted of magazines, films and, more recently, webcasts and vlogs. But lately, a handful of surf junkies have ventured into the realm of Joe Rogan and Terry Gross, getting in front of a microphone and some recording equipment to wax on about all things surf. Some have flipped, some have flopped, but there are a handful that have managed to stoke out the surfy masses in a new media form and develop a loyal fan following.

Below are five surf-related podcasts you can start listening to right now:

Ain’t That Swell–the much-adored podcast for shred heads, wax heads, kooks and barnies–has become a cult favorite among a sect of surf-stoked masses dubbed the “Swellians”. Keeping surf-stoked individuals engaged in the age of unlimited content and nonexistent attention spans can be difficult. But co-hots Jed Smith and Vaughan Blakey have their listeners cackling for the entirety of their often 2-hour-plus episodes. Combining a deep knowledge of surf history and culture with a whole lot of irreverence, the duo is able to connect to the core surfer like few can. There’s no pandering or over-explaining surf-related terms or stories that lifelong surfers would already be familiar with. When you listen to it, it feels as if you’re sitting in the parking lot at your local break, overhearing a bit of surf-related banter between old friends. The boys have done live shows in various surf towns across Australia, inviting legends like Joel Parkinson, Kelly Slater, Mark Occhilupo, Jack Freestone, Rob Bain and more to talk story with them and, of course, their loyal Swellians.

When their son was two years old, freesurfers, environmental activists and all-around good human beings Lauren Hill and Dave Rastovich introduced “Waterpeople” to the world. The duo created this wonderful audio episodic (mostly during nap times) to amplify various voices in surf culture–oftentimes ones that have been overlooked by the surf industry in the past–and to connect with the ocean community at large. Hill and Rasta’s podcast is a breath of fresh air for those looking for stories about all types of water people–those with disparate backgrounds, perspectives and experiences. Legends like big-wave surfer Paige Alms, style queen Leah Dawson, artist/filmmaker Thomas Campbell, surfer/scientist Cliff Kapono, Women’s International Surfing Association founder Mary Setterholm and more have shared their stories on the podcast, making “Waterpeople” one of SURFER’s favorite podcasts.

Legendary co-hosts Chris Cote and Todd Richards have dubbed their Monday MASS podcast as the “World’s Greatest Action Sports Show”. Released weekly, Monday Mass breaks down all the news in surfing, snowboarding and skateboarding by two of the most stoked-out action sports fans in Southern California. The duo just released an episode (which you can hear/watch above), wherein Chris and Todd talk about the ISA World Surfing Games, the newly qualified 202021 Olympians (for both surf and skateboarding) and STAB’s new Electric Acid Surfboard Test featuring Coco and Mason Ho. According to the hosts, this is probably their “best episode in years”.

With access to the world’s top competitors, episodes of the World Surf League’s “The Lineup” features some of surfing’s biggest names. For each audio installment, “The Lineup” host Dave Prodan interviews ‘CT and ‘CT-adjacent personalities about their surf careers, passions, etc. Prodan has recently mic-ed up Laura Enever to ask about her recent slab-chasing adventures, what it’s like surfing Jaws and Shippies, and how her new film “Undone” evolved over the past few years. She talks about what it was like growing up at Narrabeen, her seven years on Tour and if she’ll be charging at the upcoming Red Bull Cape Fear contest at Shipsterns Bluff. The WSL has about 72 of these episodes in the vault, so there’s plenty to listen to here.

For something a little less mainstream and scripted than “The Lineup”, and a tad more underground and rootsy, you should check out the Bodega Boarder Crew Podcast. Each BBCP episode opens up with a mixed tape of hip hop and indie music before the host, Alex Valich, interviews stylish guests mainly from the longboarding community. Towards the tail end of 2020, Valich chit chats with Kaimana Takayama, Kevin Skvarna, Dominique Miller and more. The podcast is on pause for now, but according to Bodega Boarder Crew’s Instagram, this easy listening will be back soon for your listening pleasure.