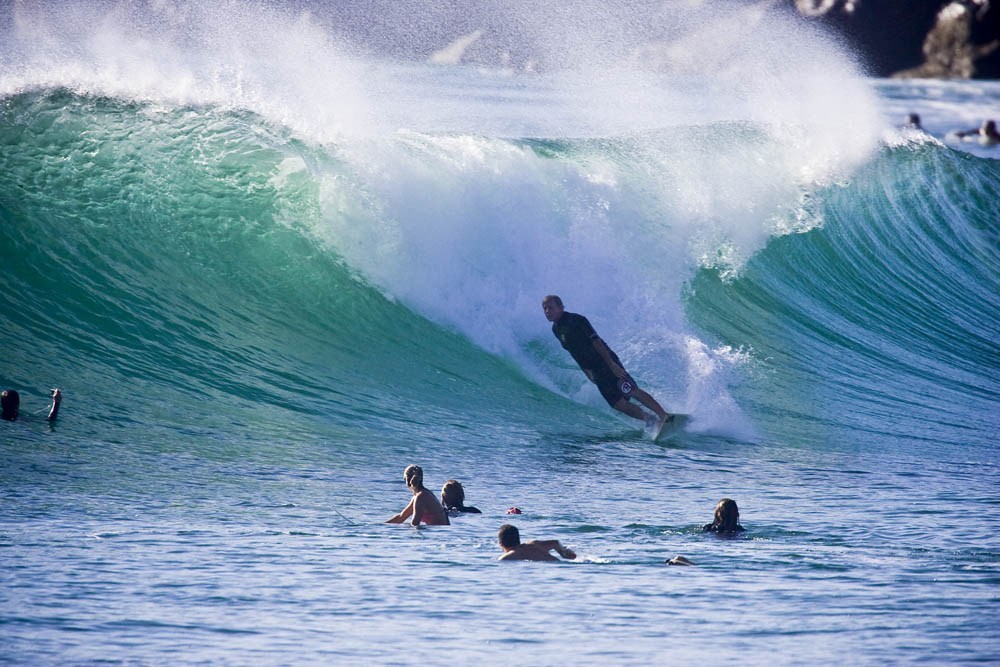 Well, he finally did it. After years as the unofficial Mayor of Coolangatta, Rabbit Bartholomew has thrown his hat in the ring and is running for Queensland State Parliament. The 65-year-old surfing legend, 1978 World Champ and former President of the ASP has been nominated as the Labor Party candidate for the seat of Burleigh, which will go to the vote on October 31. Rabbit has been a political animal for a long time now…without ever going into politics. He’s been a voice for surfing and a voice for the coast, but this is the majors and Bugs has a real chance. SURFER spoke to him about the relative challenges of getting elected versus getting a wave behind the rock at Snapper.

I’ve always worked on the theory of the seeded thought. This one’s taken a long time to germinate, but the seeded thought comes at its own time. But even 10 years ago, to be frank, I was still too frothing as a surfer. I just couldn’t bear missing good days. But things change, you know? There were also a few things that happened earlier this year that really inspired me. We had the Global Wave Conference here in February. People came from all over the world — it was the last big thing before everything shut down — but this was big. It was just phenomenal, and I saw that this was the future. These people came from all over the world and the ocean was their life’s body of work. Before it was just us guys like us surfers sitting on advisory councils and things like that, but these were the real deal — researchers, climate scientists, oceanographers, coastal engineers — just a whole range of people. I just wish more school kids came, but I saw that this is the future for them. I saw a lot of future career paths out of this for our kids and then I just said, “You know what? I feel like making more of a contribution and trying to affect change.” And the only way you can affect change is to get in the room. It won’t change otherwise. And I’m still only a candidate, I’ve got to be elected and get in parliament yet, but if I do I’ll fight. You know, I’m at retirement age and I’m rolling my sleeves up and having a dig. I want to lead by example.

This isn’t the first time you’ve looked to take on leadership roles, but this is a big one. Bigger even than being President of Snapper Rocks Surfriders.

Definitely not for the first time. And you know, I’ve done my training. I’ve done my apprenticeship. This is a new career, but I also feel like it’s an extension of everything I’ve done, too. It’s a natural extension. It’s playing with the big boys and the big girls and it’s for keeps, but you can’t change things from the outside. You can just sit on the outside and shoot arrows at people on the inside. In a way it’s a bit of a sad indictment. There’s too much of that going on. We live in a new era. Everything’s the blame game. Everyone sits on the fence and shoots arrows, but what are they really contributing? You know, you’ve got to look back on your life and go, did I actually make a difference? And, and in a way that thinking drives me.

One general criticism of the political class is that they have lived their lives in that bubble and come to power without true lived experiences. You’re not short on those.

It needs to leverage off authenticity, and authenticity comes from living a life and it comes from real world experiences. Pulling yourself up by your bootstraps and experiencing the highs and lows of life. I think there’s definitely a place for people in there who have lived on the ragged edge and really seen a lot and experienced a lot and have a good rapport built up over decades with people.

The Gold Coast doesn’t look much like it did when you were a kid. Is the pace of growth on the Gold Coast going to be your biggest challenge?

It will be a huge challenge. This is the big thing. In 1972, I stood in front of the bulldozer when they were building the Kirra groyne. It was a sleepy little village back then and, and I know a lot of people in my generation wish it would just kind of go back to 1972. I know that, and at times I’m one of them. In 1975, we were seriously living like Hobbits in the Shire here. It was a magical existence; surfing pristine waves with five other people out. And all you had to worry about was getting something to eat from the bakery. I mean, it was just such a simple life. You could live on $20 a week. You could live on $10 a week if you really tried. But things change. The secret got out about this little place up here and for the last 20 years an average of 15,000 to 20,000 people have moved here permanently every year. After a while, that becomes a big figure. We go from 220,000 to 620,000 and the reality is we’re heading towards a million people. Mate, that is the absolute reality of the situation and we’ll probably get there in 20 years’ time. These are the big challenges we face, and I’ll be honest, managing that is not the area of my love. It’s not the area of my passion. My passion is sport. My passion is the coastal environment and the ocean. They are my passions. I would love to be working somewhere in the Ministry of Sport with an eye toward the 2032 Olympic Games. I would absolutely love that.

The prospects of Rabbit getting tubed down the line on this wave and getting elected in the October election are the same, which is to say, pretty good.

Surfers have carried a pretty poor rep in wider society. Has that changed enough for you to get elected?

Well, one thing I knew a very, very long time ago was that one day professional people would surf and that’s exactly what’s happened. Half the doctors, half the best specialists in John Flynn Hospital [the local Gold Coast hospital] all surf daily. They’re keen surfers. I’ve surfed in charity tag team events with the Prime Minister and a Premier. Those people love a surfer sitting at the dinner table with them. They want to hear your stories and it has this unbelievable effect on them. And surfing is now a cradle-to-the-grave activity. It’s a family pursuit, a generational pursuit. It’s healthy, it’s therapeutic, it’s a sport. It’s a Zen art form. It’s pure art. It’s a dance. It’s all of those things. You come out of the surf and you feel terrific. You’re breathing that in.

The history of prominent Australians from other walks of life entering politics has been pretty brutal. Midnight Oil’s Peter Garrett was an icon in the environmental movement but walked into Federal politics and was an immediate target.

Are you watching the American election campaign?

Geez. When I look at it, I go, “Aren’t you guys getting on a bit here? Have you got the energy to do this?” I look at those guys and I feel like a grommet.

Are you ready for this?

Well, it’s going to be an absolute rollercoaster ride. Yesterday I visited all these small businesses, people I’ve actually known for a long time and we’re getting incredible support. I’m walking down the street and having people yell out, “Go Bugs!” People walking and yelling, “I’ll vote for you.” And it does make you feel good. But then the lows are…I know the issues that I’m just going to get nailed on. The issues that I can’t change, and that does sit heavily with me. I have to say it does. I haven’t quite adjusted to that yet [Laughs.] I think back to when I was at the ASP, and the surfers were calling for a former pro surfer to be made head judge. Absolutely demanding it and I said I would deliver on that. Anyway, we got Dave Macaulay to take the job. Dave is the nicest guy in the world. We’re talking about a much loved and respected guy. Well, I think he got to heat three and it was a close one, a controversial one. The blow torch was applied, and he just went, “Nah, sorry I’m outta here.”

Does it feel like the whole world is at a bit of a crossroads right now?

It really is. It’s time for some change and that’s what I’m running on: “Bugs for Burleigh: Time for Change.” I’m super excited. It’s going to be a wild ride, but I’m really excited. I’m vying for the seat of Burleigh, which is an incredible seat. It’s central Gold Coast, it’s the gateway to the southern Gold Coast, but I want to be the voice of the Gold Coast. Yeah. I mean, I am Gold Coast, this is my home and I love the place and I care for the place.

I’m sure the election will be pretty hotly contested. How does it stack up to surfing behind the rock at Snapper?

Oh gosh. That’s just the fiercest pecking order out there. I mean, I watch my kids out there and one of them is right out there in the top part of that pecking order. My other one’s sort of just down a track, a little a bit wider. And then there’s ol’ Bugsy, right down the end!