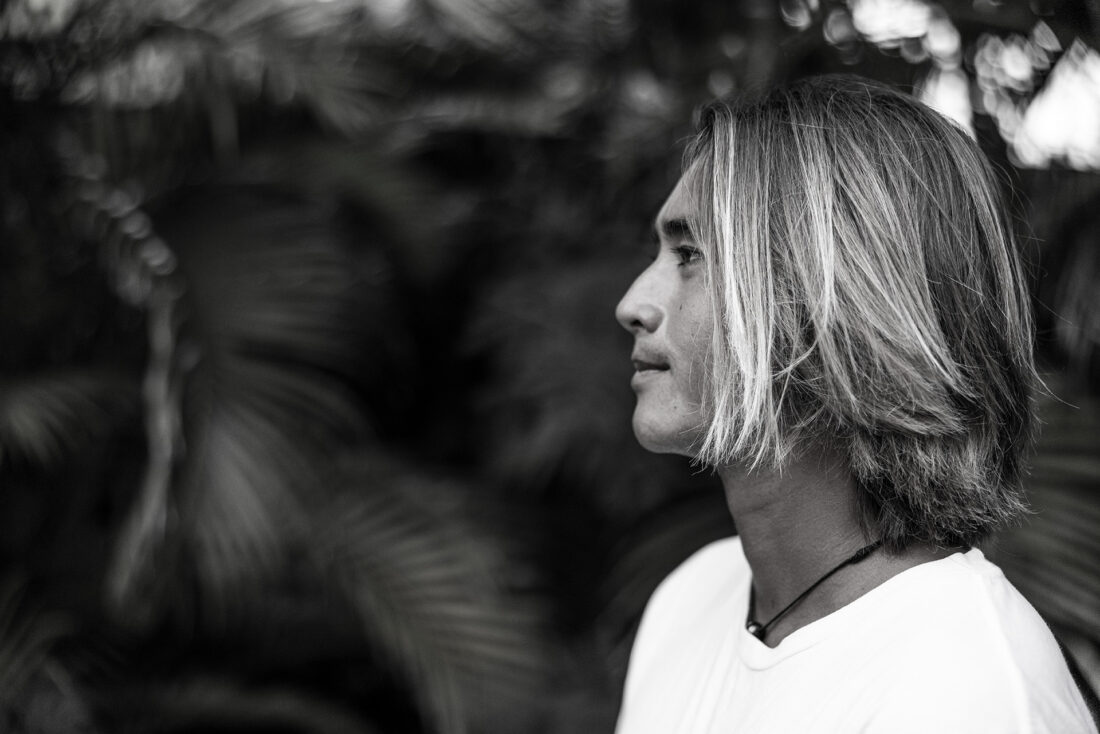 Pre-social media, 24 year old Imaikalani deVault’s ascension to the elite World Tour this past November, would have been one of the most highly anticipated events in surfing. Back in the days when major surf film releases and print magazines determined the sway of surf culture with a near monopoly of influence, deVault would have been a media darling. His unique juxtaposition of stylishly explosive surfing and elusive vibe would have been perfect fodder for the cultural gatekeepers of yesteryear. For better or worse, those days have long since passed. Today, any hype that hopes to break through the froth must be self-produced. And deVault is not one to toot his own horn.

Stories of freshly qualified rookies wildly celebrating their graduation to the big leagues abound. Stumbling into their debut events looking worse for the wear and having an early loss serve as the bitter pill to sober up by. So, I was surprised to catch deVault for this interview on New Years Eve, no less, taking it decidedly easy. Understandably so, as his even-keel demeanor doesn’t fit the brash young-pro stereotype.

But, there is a lot to deVault that doesn’t fit the mold. In recent years, surfing at the highest level on the Championship Tour has become increasingly athletic and acrobatic – to what some purists say at the expense of style and flow – deVault flips that trend on its head. While possessing as broad of an arsenal of hi-fi maneuvers as any young pro, deVaults surfing is deeply rooted in a subtle power. Reminiscent of Curren, deVualt’s surfing is void of unnecessary movement. He stylishly links his turns and is economical with moments that veer into being out of control. Paradoxically, all the while doing some of the most radical surfing you’ve ever seen. The question of how this translates onto the World Tour will shortly be answered. There is the one school of thought that some surfers are punished for being too stylish as they make it look too easy. However, there is a versatility and explosiveness in deVault’s surfing that could break through this critique. There was a time when John John’s surfing didn’t fit the mold too, and he went on to redefine what the mold is. It could soon be deVaults time to do the same.

Coming into the last challenger Series event of the year at Hale’iwa, there were quite a few surfers who had the potential to qualify. You seemed fairly at ease for being on “The bubble”. Did you know you were pretty much qualified at that point?
Yeah, it wasn’t 100% official. There was a really small likelihood that I wouldn’t make it. But, it was like 95% certain.

You’ve been trying to qualify for a few years, what clicked for you this year?
I’ve definitely been on the QS grind for a few years now. I think maybe the difference this year is being older and having a bit more experience. The QS is just so gnarly, I remember going into it right out of school thinking like, “Oh, I can do this for sure.” and just getting whooped, I realized, “Holy crap, this is gnarly.”

The COVID break was unfortunate, but in a way it was almost helpful because it gave me a year at home. I was working with my coach Pedro Robalinho here, not knowing when we were gonna compete again, but staying ready. All that time at home definitely helped me improve in a lot of ways.

Coming into this year with the new format, it was just four events on the Challenger Series held consecutively. And, I thought it was sick to have them all back to back – and with fewer events. If you had one solid result that just made your chances way more likely than before. And, I got that big result in Portugal, which was super sick.

It must have been nice to have the events consolidated in one part of the year instead of just being on an endless grind?
Yeah! We’re traveling for a few months straight, but usually you’re gone throughout the year, maybe you’re home for two weeks, then you’re on the road again, and it’s kind of nonstop. This was definitely a cool new format that I enjoyed.

Throughout the year, and in that event in Portugal in particular, it looked like you had such confidence in your surfing. Watching you surf, I’m imagining that you’re thinking, “I’m gonna go for this maneuver. And I’m pulling this, 100% percent, no questions.” That’s what it looked like from afar. Do you kind of feel that?
I definitely felt that way too. Going back to what I was saying about the training over the last year, I was constantly surfing, watching footage, really getting to know all of my equipment, which helped with my confidence, for sure. Because going into the Challenges Series, I was 100% confident that I can do it this year. Like, “This is gonna be your easiest chance. You have four events, just get one or two big results, and you’re basically there.” So, I was super confident and things felt like they were clicking.
My struggles before were not getting the right waves, falling a lot, not being a hundred percent confident, and just being nervous. This year things were happening easily. It seemed like I wasn’t really trying. And I think that mindset I had, of believing that I can do it, definitely showed this year more than it ever has before.

You’re a really versatile surfer, and you seem to perform in just about any type of conditions. So, what were some of the things that you saw as your weaknesses that you wanted to focus on?
I would say my main focus and what I was really trying to improve was finishing my waves and not falling as much. That was something we’ve been working on a lot. Maybe not going so hard all the time, which was kind of how I always wanted to surf. And that was hurting me in a way for a few years, competition wise. And, the mental side of competing was where I was trying to improve the most.

And, grinding it out in smaller waves. The QS is typically in waves like that. So, improving my small wave beach break style surfing, which I think I’ve done. But, now I gotta go back to focusing on good waves. Which is awesome.

I’m almost glad I didn’t qualify at 19 because I definitely was a lot skinnier then. I think over the last two years, I’ve really filled out more. I’ve been training and getting stronger. I was really working on the power surfing side of things. At one point I felt like I got the airs and all that. But, I needed to improve on power surfing. I knew I was capable, but I just wasn’t really ever thinking about it before. So, that’s definitely been one of my bigger improvements over the last two years. Filling out, getting stronger, and putting that into my rail surfing.

And it looks like your equipment’s working really well. Maybe talk a little bit about your relationship with your shaper, Keith Teboul, of KT Surfboards. It must be cool for you to have a shaper who’s from Maui as well.
Keith’s a legend, and I’ve been working with him for about five years. And, during this time that I was home over the past year, I was really working with him closely. I feel like he’s always been really, he’s got really good boards for the standard Hawai’i size waves, with his step-ups and all that. So we were really dialing in on a QS quiver, grovel boards. And, I feel he’s improved a lot in the past year, just from us working together so closely. He’s got such crazy technology and equipment coming from his windsurf shaping – all the carbon and epoxy and vacuum seals. He’s the real deal, our equipment is crazy good right now, and he just keeps improving. It’s gonna be sick to be riding his boards on the CT, and to give him more of a global stage for people to see his equipment, because he definitely deserves it.

Maui is such an epicenter of talent. What’s it like being a part of that, but still being a bit removed from, you know, “The scene,” on Oahu.
It’s maybe not as easy for kids from the outer islands to really get that recognition or that chance to blow up. But, Maui has so much talent and it always has. When I was a kid, the guys I would surf with on a daily basis we’re some of the best in the world. Like Dusty Payne, Clay Marzo, Albe and Meola.

Honestly it’s crazy that more guys from Maui haven’t qualified, because there’s definitely a lot of guys worthy that should have been there. But, it’s super rad to be only the second guy from Maui to qualify.

Wow, that’s crazy. It’s hard to believe it’s only been Dusty and yourself.
There’ve been guys that’ve been close like over the years that just never did it. But, it’s super sick to see the whole community, behind me, supporting me, and how psyched they are for me. It’s definitely tight-knit over here on Maui and we’re all pushing for each other to succeed.

Hopefully you’ll start the trend and there’ll be more Maui surfers making it onto the Dream Tour soon.
I think there will be. I’m definitely not gonna be the last guy from here to make it.

So, this is like a personal “dream tour.” You’ll be checking things off the wishlist.
Yeah.

The mid-year cutoff, the WSL has brought it back. You gotta deal with that first year in, but at least I guess they’ve made it so the Challenger Series is stacked to the back end of the year, correct?
Yeah. You have five events to stay on tour by finishing in the top twenty. Then it’s the cut, and the Challenger Series starts in the summer. So if you do fall off, you have the chance to just go straight back to that challenge series, but hopefully not. That back half of the CT is sick.

There have been some major changes to the schedule and format, but I guess the silver lining for you is you get to start your rookie year at home in Hawai’i, on two waves you’re familiar with – Pipe and Sunset.
Sunset, Pipe, and then Bells and Margarets are all waves that I feel suit me well. So, I definitely have no excuse to not requalify. I just gotta make some heats.