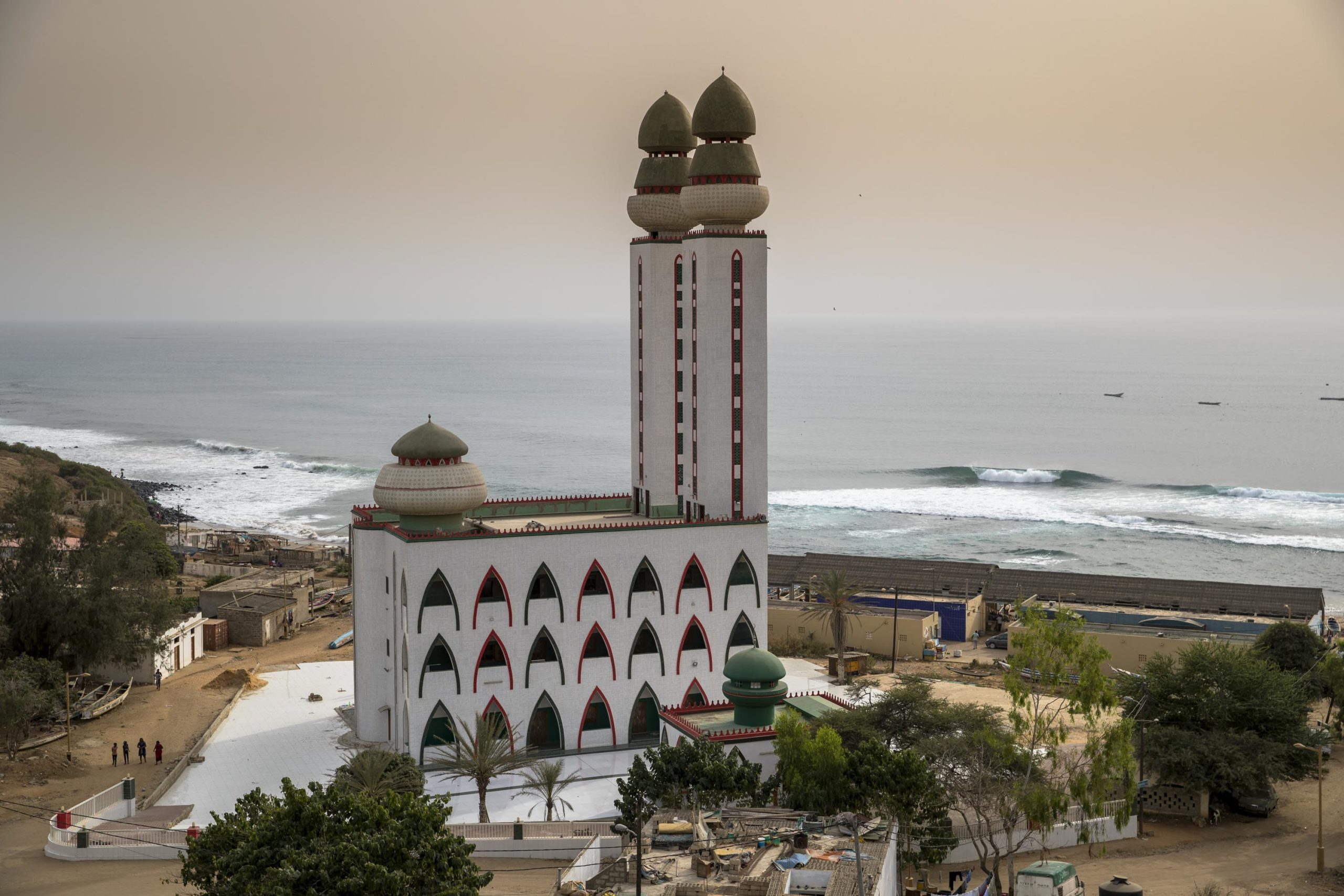 In an alternate universe where COVID didn’t exist, the surfing world would be gearing up over the course of the next couple weeks to watch one of the WSL’s most anticipated stops on the Championship Tour — the Corona J-Bay Open. The iconic righthander known as Jeffreys Bay has long served as a liquid canvas for some of the most stylish surfers in history (see: Tom Curren in “Searching for Tom Curren”) and has existed at the center of many escapist surf-travel fantasies. It’s no surprise the spot gets the attention it does.

But there are far more drool-inducing waves in Africa aside from Supertubes.

With over 18,950 miles of coastline, the continent is home to a vast variety of waves – some of which are only just starting to be explored. South African photographer Alan Van Gysen has made it his life’s work to seek out and document these far corners, uncovering everything from hidden slabs to endless sandspits.

We asked him to shed some light on a few more gems in Africa worth venturing to if you get the chance — you know, once COVID is in the rearview mirror and we’re all able to travel again. Below are five of the best surf spots in Africa, beyond J-Bay and Skeleton Bay.

Senegal was first made famous in “The Endless Summer”, when Bruce Browne and co touched down in Dakar, signaling the start of their round-the-world odyssey.

While the crew scored good waves off the small island of N’Gor, little did they know it was just the tip of the proverbial iceberg.

Dakar lies on the Cape Verde Peninsula, a surf-rich isthmus that juts out into the depths of the Atlantic Ocean and is pockmarked with reefs and points that receive swells from the regular storms that slide across the Atlantic and down from Europe. The crown jewel is Oukam, an A-frame reef that lies at the foot of the iconic Mosque of Divinity.

“Ouakam is a bit of an anomaly,” says Van Gysen. “ It’s a perfect A-frame reef that feels more Indonesian than African. What I mean by that is that is it’s very rare to find a reef that’s so defined and mechanical along these exposed stretches of coastline, which are prone to extreme erosion.”

The wave is flanked by deep channels on either side and offers a spinning tube that opens up into a high-performance wall, not unlike Lakey Peak. But it comes with a caveat: only the biggest north/northwest swells wrap around the headland. Or, if you’re lucky, a rare west/southwest swell will fill straight in. Far more common are flat days and the fist-sized urchins that lie strewn across the reef.

“The really cool thing about Dakar is it’s got such a dense concentration of waves that there’s almost always somewhere to surf,” says Van Gysen. “Plus the local crew are legends. The Senegalese are incredible athletes and surfing has a long history there, so the level of talent is really high.” 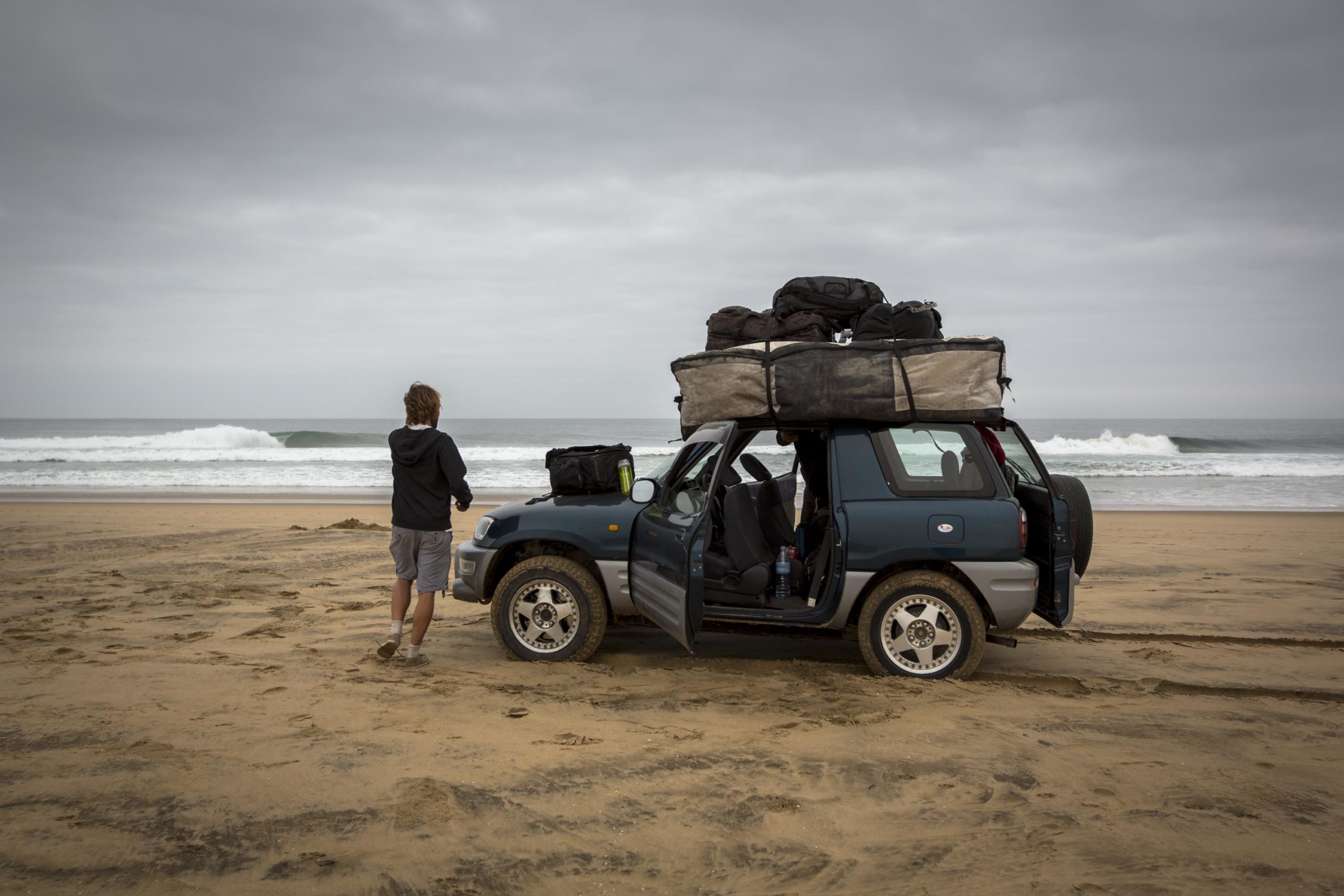 “Twice as long”. That’s how Van Gysen describes the unnamed left in Angola when compared to its southern neighbor, Skeleton Bay.

Both waves need huge swells that march up from Antarctica to get going. Both waves have been sculpted by restless southerly winds that blow sand along the coastal deserts, and both have a relentless current. But that’s where the similarities end.

“The Left in Angola is a far less daunting prospect,” says Van Gysen. “Don’t get me wrong, it also produces incredible tubes but it’s not the backless, below-sea-level type ride you get at Skeleton Bay. Think of it more like Cloudbreak compared to Teahupoo. The entire wave is about three kilometers long and bends around the last corner of sand into an open wall where you can even get some turns in.”

The Left came to the surfing world’s attention in a series of short video clips featuring the Brand brothers, Benji and Davey, surfing the wave in full cry after they were tipped off by Van Gysen, back in 2013. But very little has been seen or heard about it since then, which Van Gysen says isn’t surprising.

Angola is infamous for its non-existent infrastructure, a hangover from decades of civil war. There are no local surfers and the government doesn’t care much for tourism, thanks to the copious amount of oil and diamond deposits that litter the country.

“Getting around beyond the capital of Luanda is a mission,” says Van Gysen. “You really need to be prepared and have everything you need with you or hook up with a good operator,” says Van Gysen. “Most people are pretty friendly but there’s a strong military presence and lots of soldiers with guns. It can feel sketchy at times. But if you do happen to find yourself there during a good swell, you’re pretty much guaranteed to be in the water with nobody else around.” 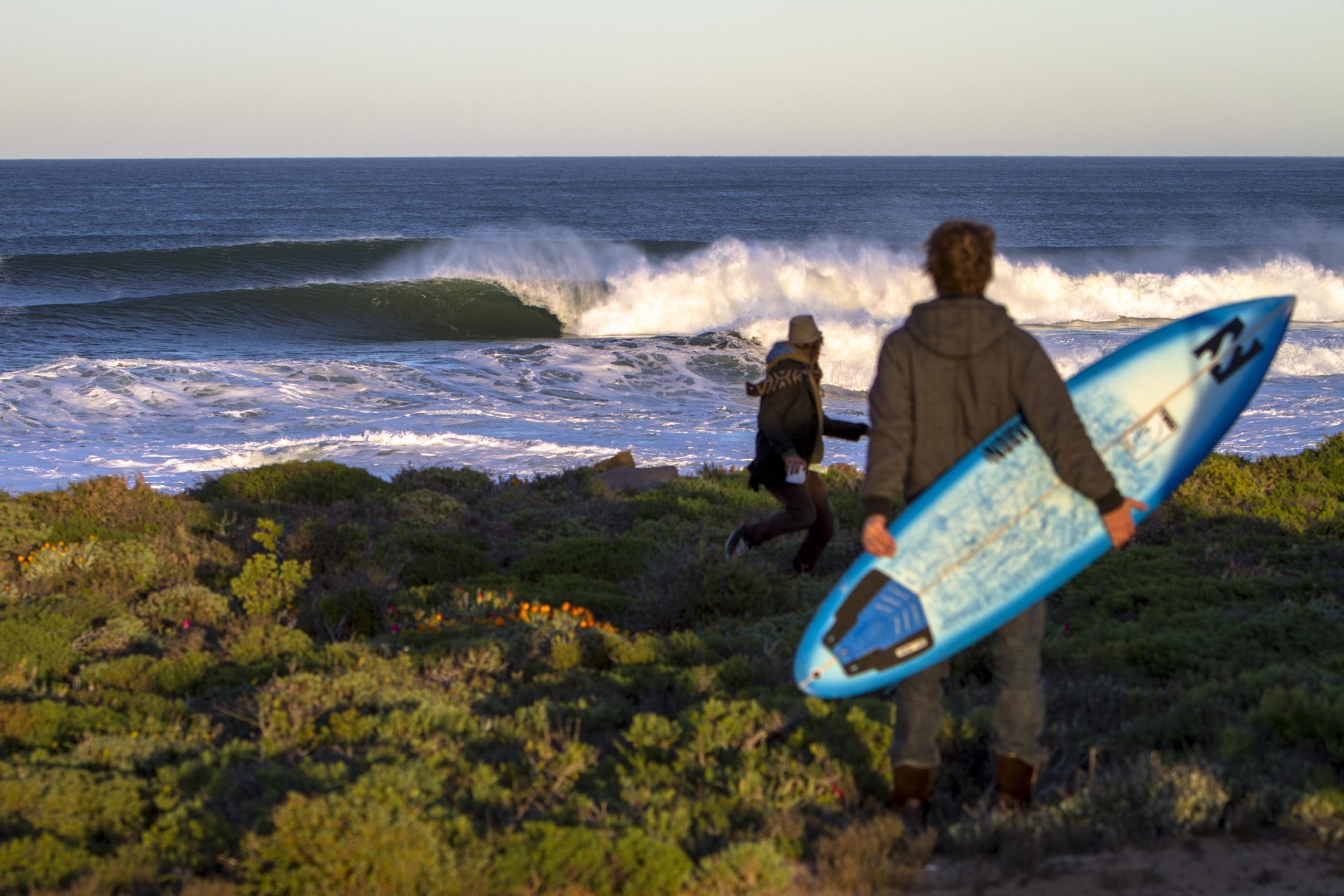 Before the frigid west coast of South Africa turns into the sweeping deserts of Namibia there lies the Northern Cape, a no-mans-land left to rugged diamond divers and the rich sea life that inhabits these waters. Surfers have also started poking their noses around the area of late and in the process came across AL’s, a wave Van Gysen describes as one of Africa’s best slabs.

The photographer says the name is not a self-gratuitous tip of the hat, but rather an acronym for Andrew Lange, who accompanied Van Gysen and Twiggy [above, alongside Lange] on their first foray to this forgotten stretch of coast.

“Some bodyboarders had told us about Devil’s Horn, a crazy slab around the diamond areas”, recalls Van Gysen. “We went up there and eventually found it but it’s a psychotic wave, borderline surfable at the best of times and no guarantee you’re coming out. Twiggy got injured when he was flipped in the tube and got a fin up his butt. He escaped serious injury – the other fin just missed his spine – but it was close and a real wake up call to just how isolated you are out there.”

When the swell settled down, Lange convinced the crew to check out a nearby reef he had scouted that showed signs of potential.

“It was just starting to get light when we arrived and the wind was perfectly offshore from the cold land breeze,” says Van Gysen. “Roosta (Lange) was still trying to figure out where the spot was and had to go for a dump, so we pulled over. A set approached and that’s when we saw it and all went nuts. The first photo I ever took of the place has Roosta running back to the car to suit up but he can’t look away. You can still see the toilet roll in his hands.”

AL’s was as perfect as it looked, a serendipitous lump of reef that splits the strong Atlantic swells into a gaping righthand barrel. “You need the right swell direction and it can’t be too big, but when it comes together it’s mechanical and can hold up to 10 foot proper,” says Van Gysen. “The end section sometimes looks unmakeable but the way the wave breaks, it forces all the foam out of the tube, so it ends up actually pushing you out these incredibly deep barrels. South Africa doesn’t have too many legitimate slabs, but this one makes up for it.” 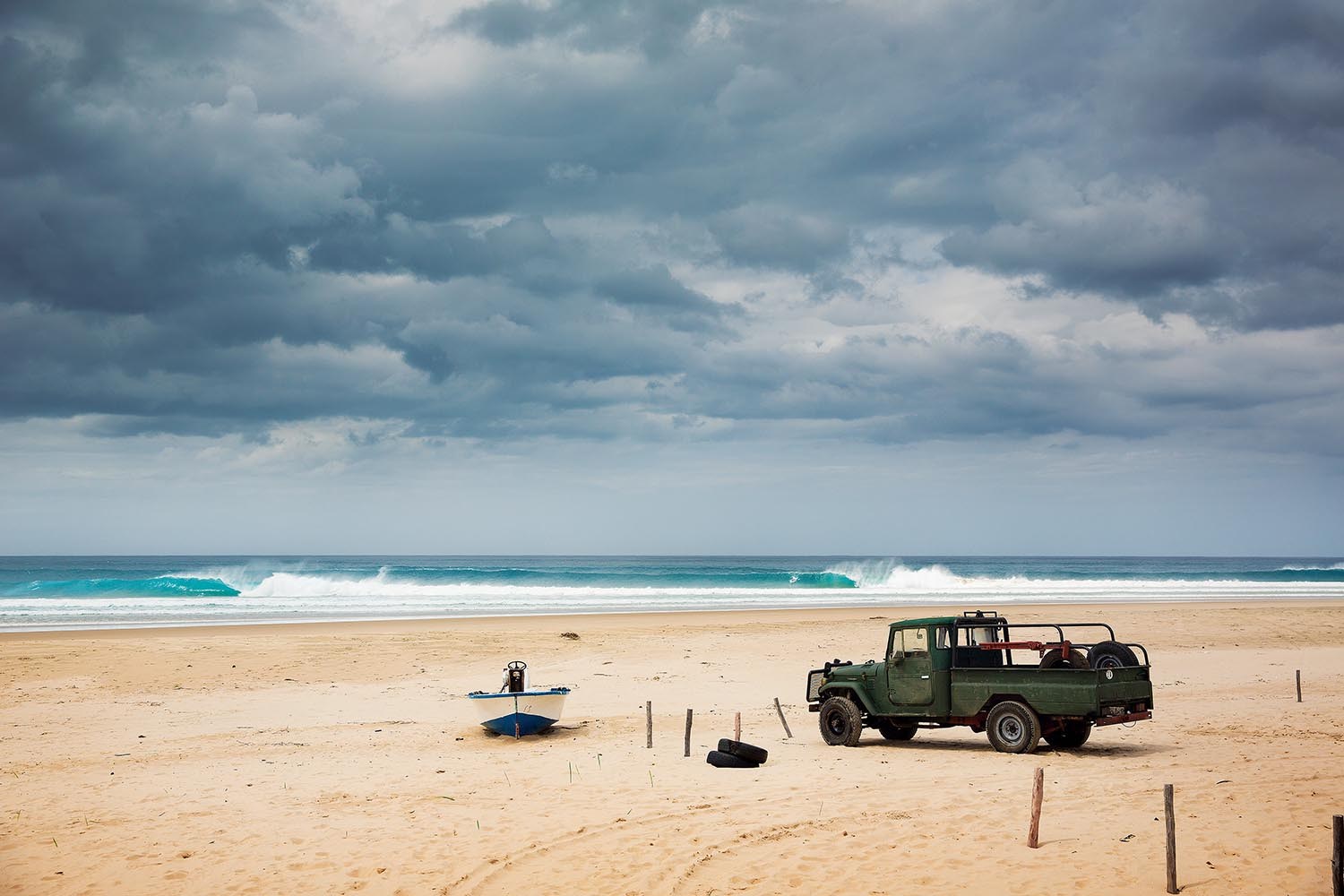 If you place your finger on the map of Africa and draw a line from Skeleton Bay straight across the continent to the east coast of Mozambique, you’ll find yourself at another sand-bottomed anomaly. Unlike Namibia though, the water in Mozambique is bath warm and the barrels are blue, earning it the moniker of the African Kirra.

The name is equal parts truth and irony. Easily comparable in quality to its Gold Coast namesake, the wave breaks minus the ever-present crowd Kirra has long been synonymous with.

“The wave itself is really perfect but it’s ridiculously fast, which makes it tricky to ride,” says Van Gysen. “Even some of the top guys in the world struggle at first to figure it out. The best I’ve seen it surfed was by Jordy Smith when I was with Joe G’s team, filming for “Strange Rumblings”. Jordy was camping out waiting for the same swell and when it hit, he put on a clinic.”

The same stretch of sand is populated with dive resorts and is renowned for its clear, placid waters. In case you’re not reading between the lines, that means it’s fickle. Like, really fickle, says Van Gysen, only lighting up on cyclone swells that bounce around the Mozambique Channel between January and April. Like most of Mozambique’s sandy pointbreaks, the wave also requires a low tide and disappears when the tide fills in.

“We surfed for five hours straight that day in  ‘Strange Rumblings’,” says Van Gysen. “Brendon Gibbens arrived on the beach just as the tide was coming back in. He had been in Panama when he heard it might be on and spent two days making his way there to join us, but as he paddled out, it literally went dead flat. The poor guy eventually caught a two-foot closeout, did an air-reverse, and came straight in. I’ve never experienced that anywhere in the world, where the tide can make a wave from six-feet and perfect to non-existent in the space of one set.” 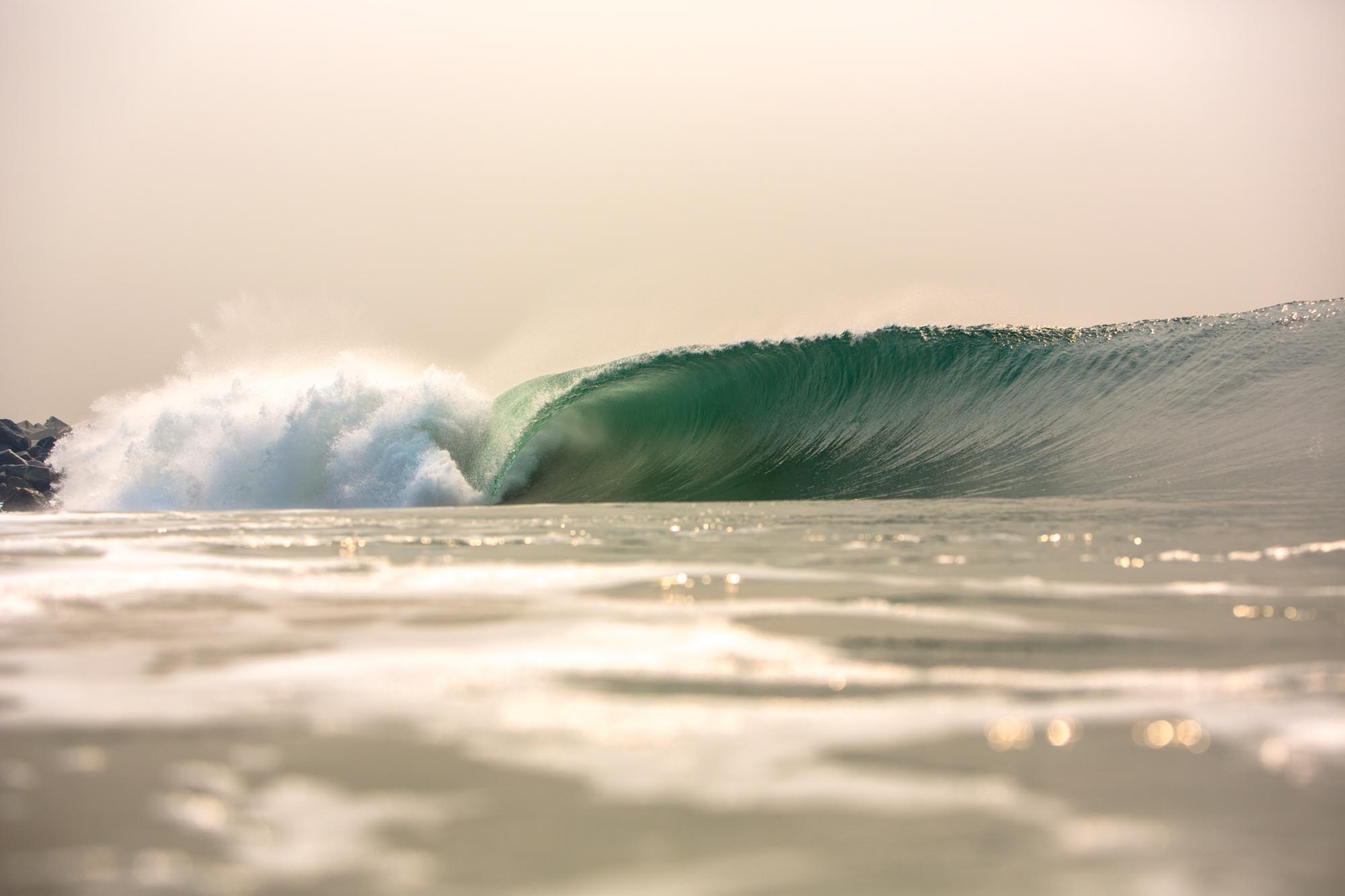 Nigeria has become famous for its skatepark-like wedge that lies at the foot of a breakwall deep inside Tarkwa Bay. In recent years, the wave has spawned a burgeoning local surf scene that even the forcible eviction of hundreds of villagers by the military hasn’t been able to quash. But the real gem, according to Van Gysen, lies on the opposite side of the wall.

“Lighthouse is a really intense, hollow left that can produce much longer barrels,” says Van Gysen. “It’s located on the western tip of the breakwall and is a lot more exposed. It picks up lots of swell but only really works in the dry season winds, which blow straight offshore from the desert, and needs a low tide – the exact opposite to the right. When it all comes together, it’s as good as any wedging beachbreak I’ve seen.”

What’s really surprising, says Van Gysen, is the power with which the wave breaks.

“I think it’s because the swells come straight out of deep water from the Gulf of Guinea,” Van Gysen continues. “When they hit the tip of the breakwall, the refraction makes the wave double up and creates this slingshot wedge. You’re always going to get closeouts with those kinds of waves but a lot of them have two, even three barrel sections and then a giant ramp. I remember watching Will Aliotti getting tubed in this clear green water that looked like Indo, except we were on the outskirts of Lagos. It’s definitely one of the most unique waves I’ve visited in Africa.”