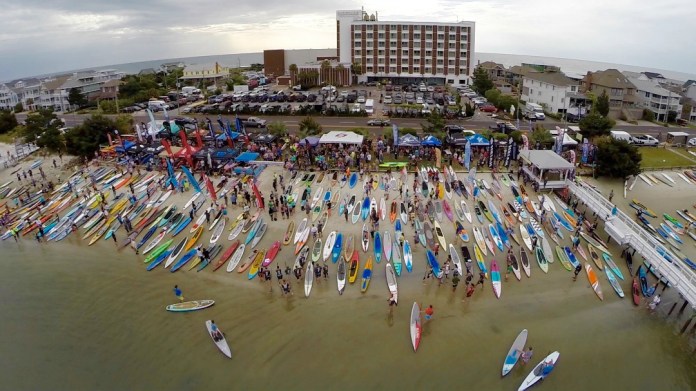 The Association of Paddle Professionals (APP) announced this week the US East Coast championship race, The Carolina Cup, will become the Opening Stop for the 2021 APP World Tour.

The Carolina Cup, in Wrightsville Beach, North Carolina will replace the APP World Tour’s previously scheduled Hawaiian Grand Slam event which was cancelled due to Covid-19 regulations on Maui. This is an exciting development as the Carolina Cup provides a fitting replacement for the opening leg of the Tour, being one of the longest standing and most highly respected events in the United States.

Organized by the Wrightsville Beach Paddle Club, the Carolina Cup hosts a four-day festival of stand up paddle events featuring seven SUP races, multiple seminars, and paddle stroke clinics given by the pros from 4th-7th November. The mixture of professional level racers on the start line next to amateur and entry level participation is completely in line with the ethos of the APP’s vision of inclusive participation for all.

The APP continues to be committed to delivering a full range and comprehensive stand up paddle world tour that maintains its presence in the Americas, Europe and the East to crown the Women’s and Men’s World Champions for both SUP Racing and Surfing. The association believes 2021’s venue line up will build to what will be a ground-breaking year in 2022.

“Disappointment is replaced with excitement, as the cancellation of the Hawaiian leg due to Covid-19 has led to our partnership with one of the longest standing events in the US as the World Championship Tour Opener for 2021. The APP and the Carolina Cup are aligned and committed to bringing the global paddle community back together on US soil. Having worked together in previous years with the event as an official qualifier for the APP World Tour, the whole Team is excited to bring the Tour to this vibrant East Coast Community in 2021.”

The Carolina Cup’s signature race, the challenging 13-mile Graveyard, will become the distance discipline of this US Stop for the APP World Tour. The APP will then introduce a unique Sprint Racing format to provide more action and excitement for all Racers and Spectators alike.

The APP athlete’s overall winners in the distance and sprint racing components of the Carolina Cup will be crowned as well as the overall Champion for the 1st stop of the 2021 APP World Tour.

Due to challenges with global travel, and in order to support the athletes by providing an opportunity to throw out a bad result, APP athletes will be able to discard their single worst distance and sprint results from across the 2021 APP Racing World Tour to determine the Overall World Champion and final leaderboard. Only each athlete’s best three Sprint and Distance Results from the 2021 Season will count towards the Overall.

Registrations are NOW OPEN for the first three events of the racing season! Stay tuned at www.standupjournal.com for updates on the 2021 Surfing Schedule. Gran Canaria and Sunset Beach are confirmed venues, with registrations already open, and Morocco pending final confirmation.

The APP World Tour is the Professional World Championship Tour for the Sport of Paddlesurfing (also known as SUP / Stand Up Paddling / Paddleboarding), officially sanctioned by the IOC recognized Federation for Surfing Sports, the ISA (International Surfing Association).

Re-branded in 2017 as the APP World Tour (previously known as the Stand Up World Tour and Series) the APP has been crowning the sport’s World Champions for both Men & Women across Racing and Surfing since 2010.

The APP World Tour produces a complete inventory of programming, including live and post produced broadcasts from its events, with distribution to over 100 countries worldwide via premier global networks such as CBS Sports and Fox Sports Asia & Australia.