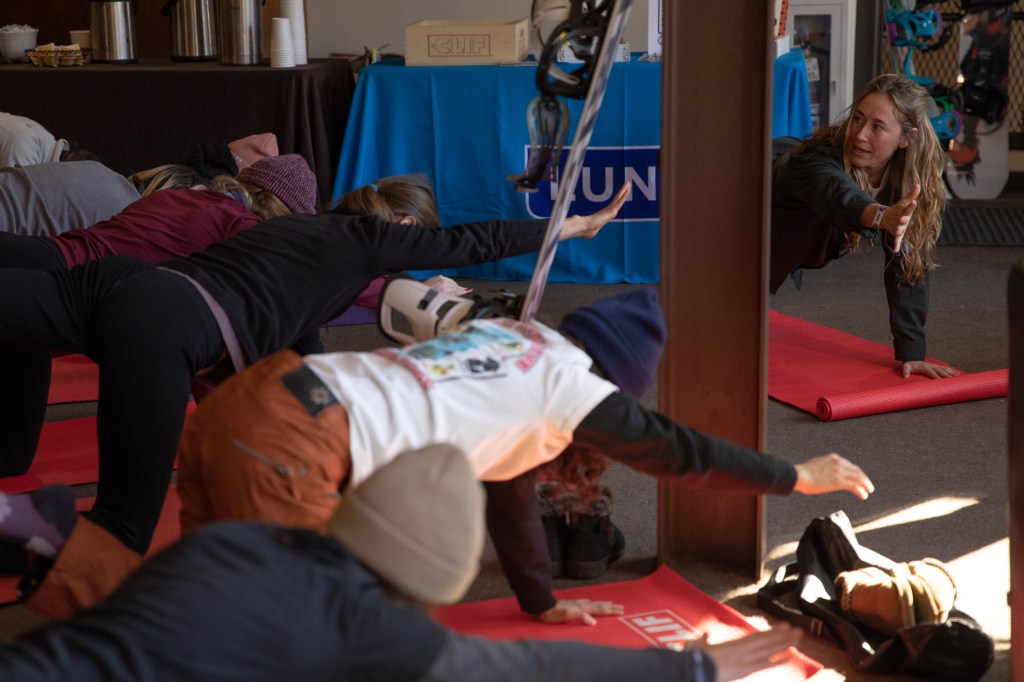 For the third year in a row, Beyond the Boundaries Women’s Snowboard Camp headed to the mecca of BEC SPK that is New Jersey for a weekend at Mountain Creek. Creek has long been a park oasis a stone’s throw from NYC and over the past three winters, the BTBounds crew have teamed up with the NJ resort for an unbeatable park party just for women. 2020 was no different as sixty ladies congregated in Creek’s South Lodge on Saturday, February 22nd and kicked off the weekend with a yoga session with Clif Bar’s Nico Klimek.

BTBounds co-founder, Christine Savage grew up on the trails of Mountain Creek and looks forward to returning there every season. “Bringing Beyond the Boundaries to Mountain Creek is a highlight of my winter every year,” said Christine. “Aside from the nostalgia of returning home to New Jersey and where I learned to snowboard, the tri-state area ladies are a special breed and such a fun crew to ride with. They are tough as nails and progress incredibly fast. And on top of that, Creek is just a blast to ride at! The park is top to bottom and perfect for hotlapping, and if you keep your eyes open there are sidehits everywhere. This year the coaches even went back out after camp ended to experience some authentic Jersey nighttime park laps.”

Christine, along with Taylor Elliott, Savannah Golden, Alice Gong, Ari Morrone, Ashley Giangregorio, Summer Fenton, and Kelsey Boyer were on hand to instruct and provide stoke as the coaching crew for the weekend. Matt Byerly, Creek’s terrain park manager created a wonderland of freestyle features with his driven staff. It was one of the best parks BTBounds has ever had, hands down. In addition to both stock and creative options for boxes, rails, and jumps, the private progression park included ample area for flat group buttering at the bottom of the lane, an intro side-approach box, a progression hitching post, and a mushroom jib! 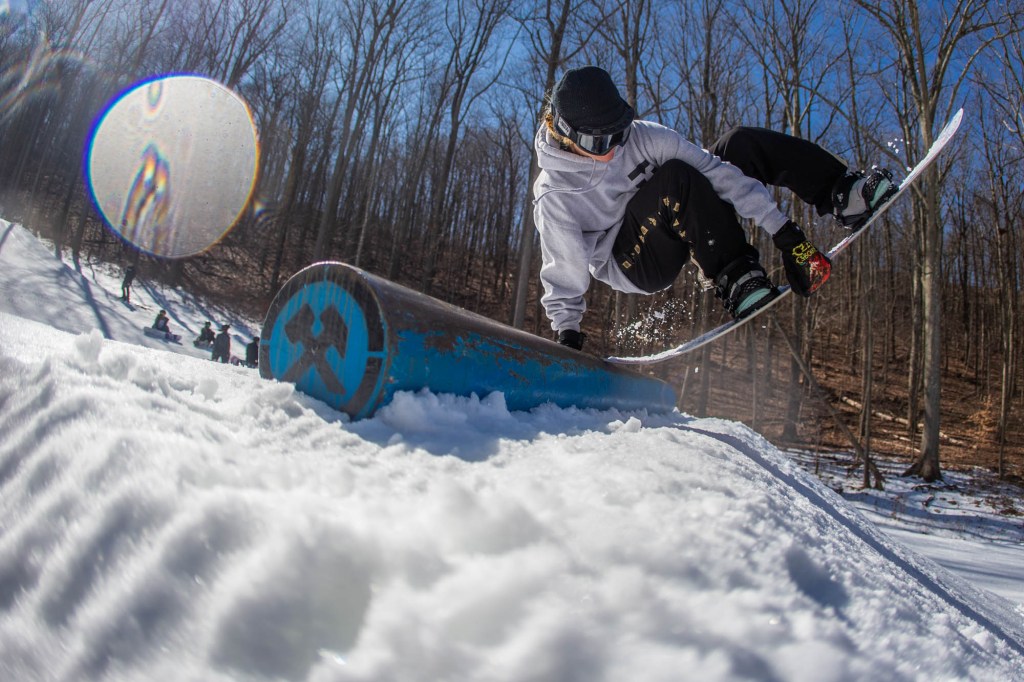 The ladies of the East Coat are massively dedicated to standing sideways. In 2019, camp fell on a sunny but cold weekend, and even though the snow was hardpack, no one ever thought twice about throwing down and learning new things. Exciting weather is the baseline in the Northeast and it serves to only make for a more devoted community whose outlook knows no bounds when it comes to the weather. This alone makes the East Coast stops of camp epic. This year, though, the Creek crew was rewarded with absolutely perfect spring conditions. The sky was blue, the snow was soft, but fast, and the park was firing. It was awesome. 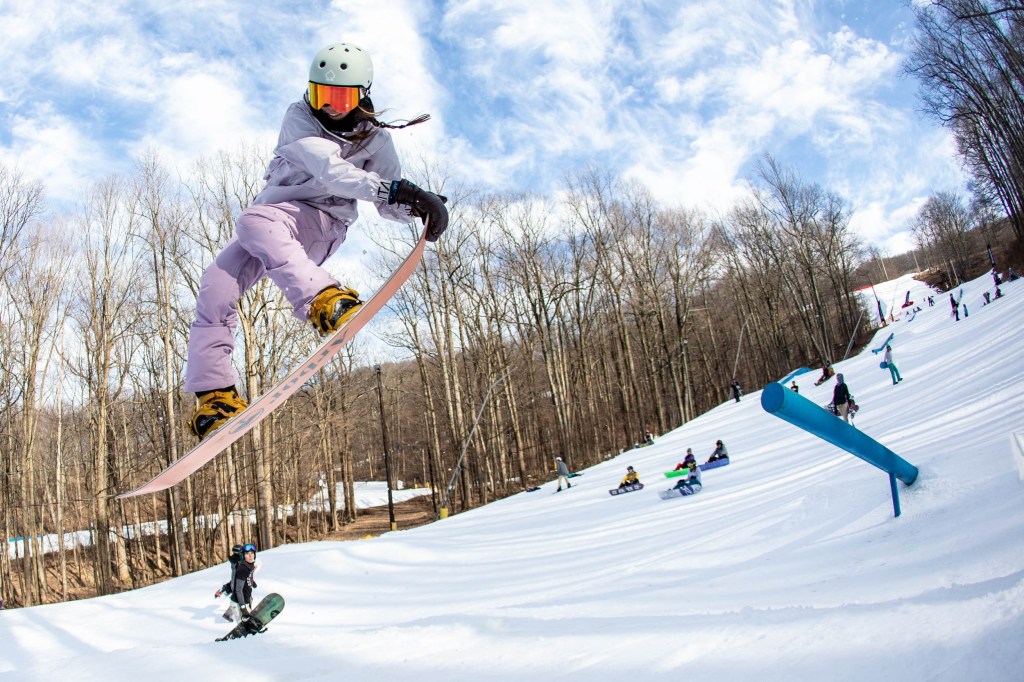 Music blared all weekend as women hiked features and dropped in to try new things, quieting their nerves, pushing themselves, and getting rewarded with new tricks and increased confidence. Christine ran a session of buttering and trail tricks. Taylor and Ari provided pointers on hitting jumps for the first time. Alice upped the ante, teaching 180’s. Savannah broke down the barrier to the mushroom jib and it quickly became a favorite feature of the weekend (worth noting that Jen Chang, the production manager for BTBounds, crushed the mushroom her first time hitting it). And Summer and Kelsey started a session the pole jam that was still going strong as the sun started to dip behind the trees on Sunday and everyone slowly made their way inside for the awards celebration. 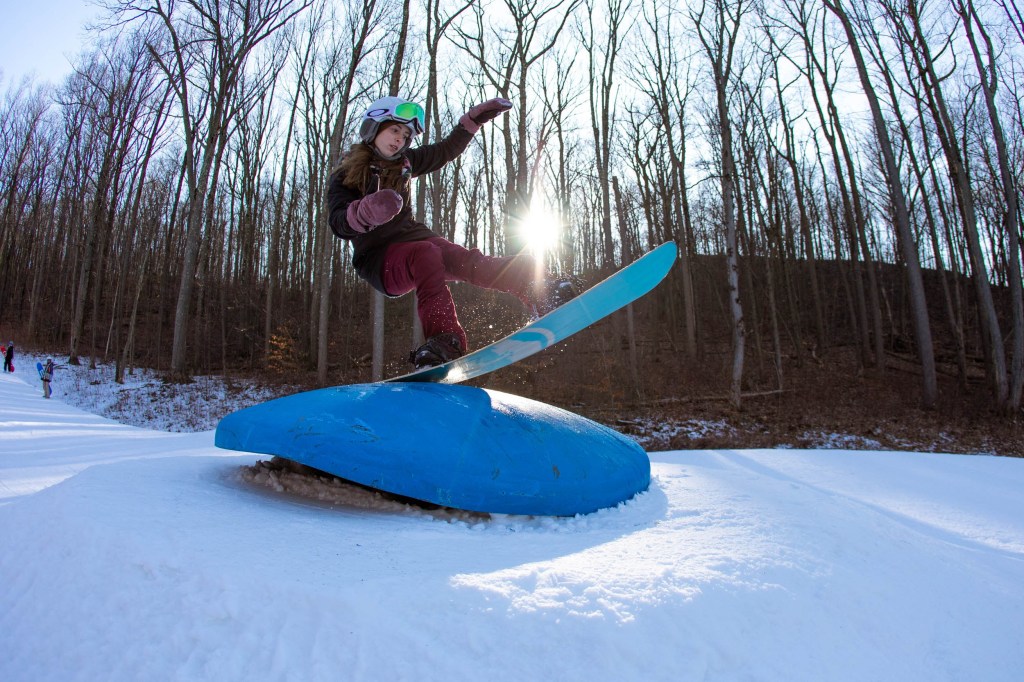 Gabriella Spadora, such good style on the mushroom jib.

Now three years in, BTBounds continues to strive to provide a nucleus for local women to ride together and push their snowboarding, something that continues the rest of the year. Each season, the community has grown–something BTBounds feels lucky to be a part of–and Christine and the rest of the crew can’t wait to continue the event for seasons to come.

Thank you so much to the sponsors of Beyond the Boundaries that help to make camp happen: Clif Bar, Saga Outerwear, 686 Outerwear, Blackstrap, and Arcade. And a huge thank you to Jackie, Chris, Tom, Matt, Hugh and everyone at Mountain Creek for the support and collaboration. Can’t wait for 2021! 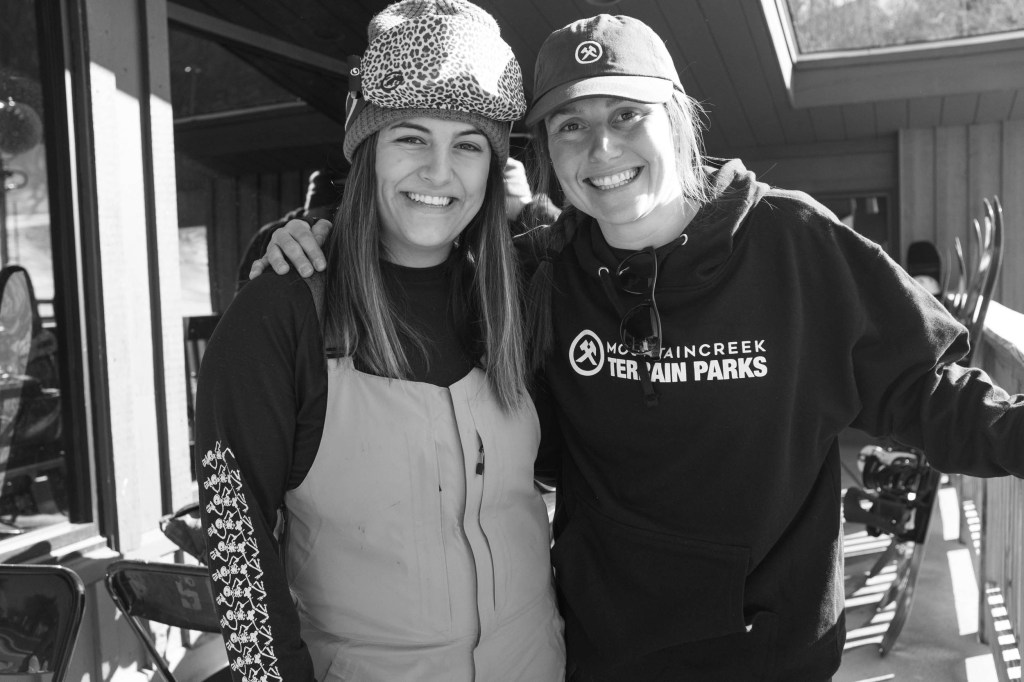 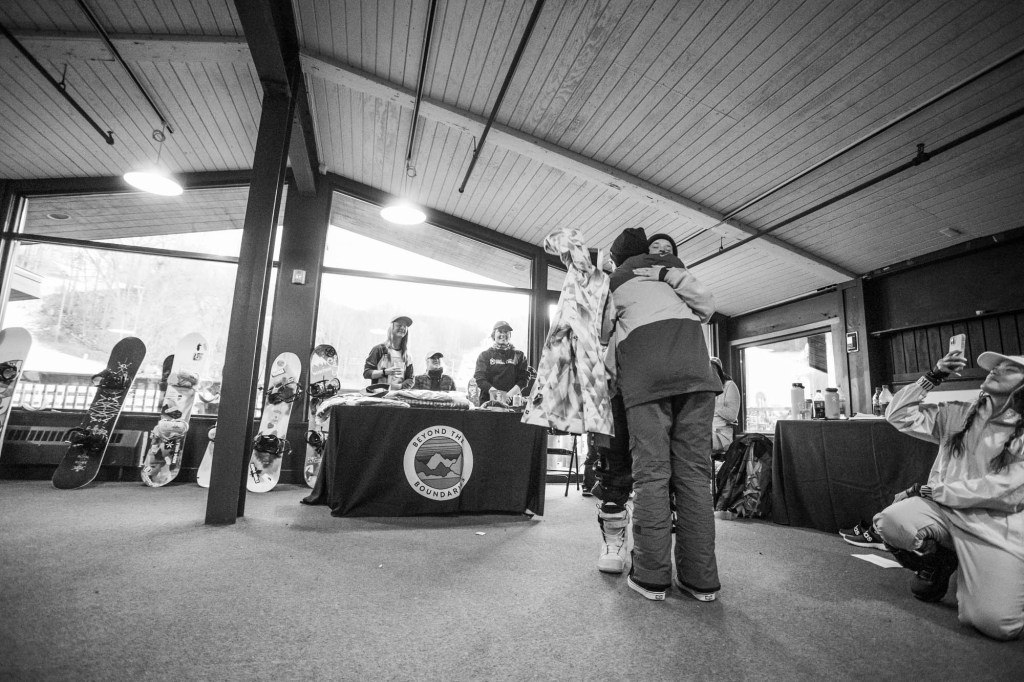 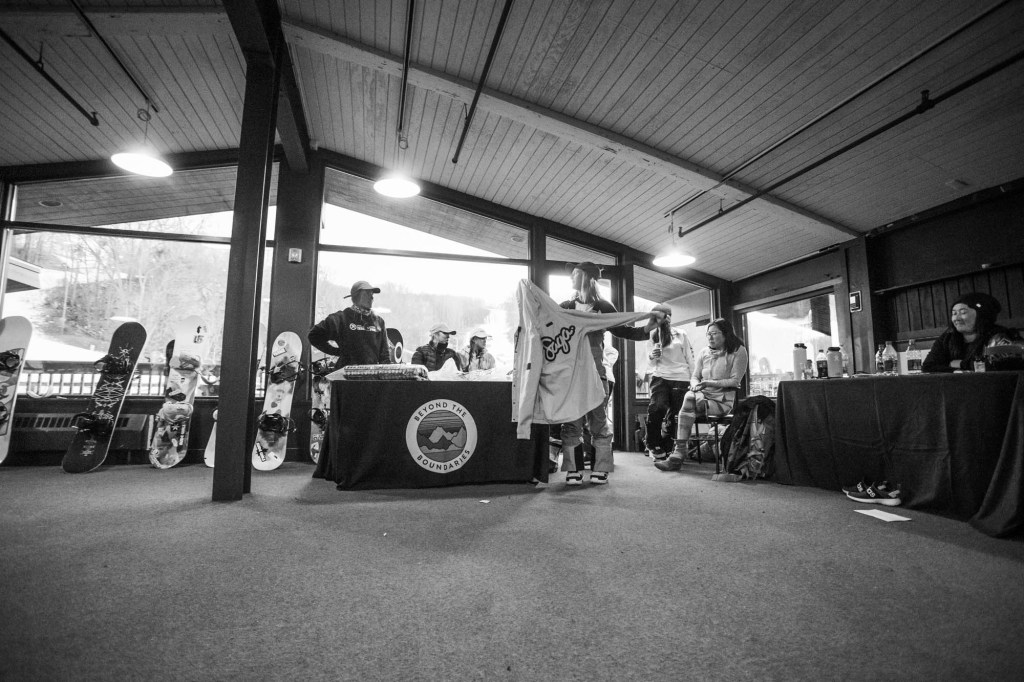 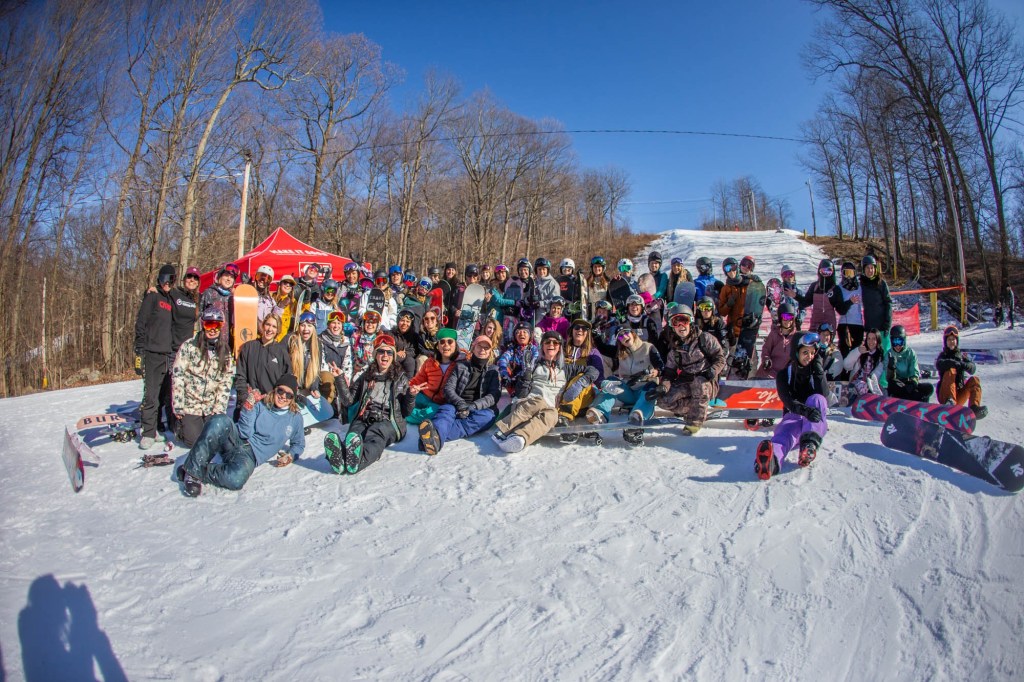