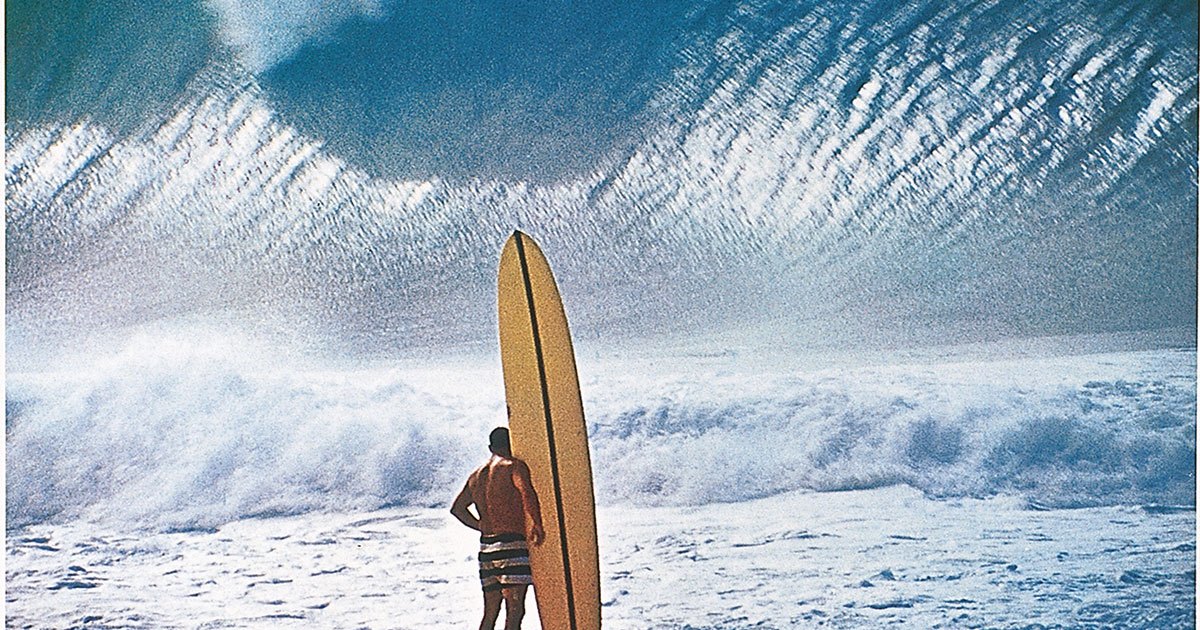 Yesterday, Greg Noll–legendary big-wave surfer and one of the first people to charge Waimea–passed away at the age of 84.

Dubbed “The Bull” at a young age for his 6’2″ frame and his unwavering composure paddling into building-sized waves, Noll earned a reputation in the ’50s and ’60s for his talent in oversized surf. Regularly charging Makaha, Waimea and Sunset, Noll pushed the limits of clunky balsa wood boards, both in the lineup and in the shaping bay. According to Matt Warshaw’s Encyclopedia of Surfing, Noll thrived in the adrenaline-pumping waves dotting the North Shore, especially at Waimea:

“Noll convinced his friend Mike Stange to paddle out with him at Waimea on November 7, 1957, when the surf was about 15 feet. Another six surfers followed. There was some debate in years to come as to who rode the first wave, but all agree that Noll led the charge, and he’s therefore received credit for opening Waimea Bay—the break that would all but define big-wave riding for the next 35 years. (It later came out that a mild-mannered Seal Beach lifeguard named Harry Schurch had in fact caught a few waves, surfing all by himself, before Noll and his gang showed up.)

Noll had made a pioneering effort of a different sort one year earlier, as a member of the American lifeguard team that visited Australia during the 1956 Melbourne-held Olympic Games. Noll and his surfing teammates arrived with their Malibu chip boards, and their impromptu wave-riding demonstrations yanked Australia into the modern surfing age. “We hit ’em like a comet,” Noll later recalled. “Took ’em from the horse and buggy straight to the Porsche.”

Meanwhile, Noll had decided to make a career in surfing any way he could. He published the Surfer’s Annual magazine in 1960, followed by the Surfing Funnies (1961) and the Cartoon History of Surfing (1962). He made five surf movies, from 1957 to 1961, each titled Search for Surf. But his main business was Greg Noll Surfboards, founded in the early ’50s as Noll began shaping boards out of his family garage. In late 1965, Noll opened a brand-new, custom-built, 20,000 square-foot factory in Hermosa Beach—the biggest board-building operation in the world at the time—which included a separate room for making foam blanks, eight shaping stalls, and a 40-board-capacity laminating room. Noll Surfboards produced up to 200 boards weekly in 1966, about half of which were shipped across the country to dealers on the eastern seaboard. Noll also produced Da Cat, Mickey Dora’s signature model surfboard; an instantly notorious print ad featured Dora hanging Christ-like from a cross made of two Da Cat surfboards.”

At the young age of 32, after a particularly heavy wipeout at Makaka in 1969, Noll retired from big-wave surfing. “Noll was 32 when he dropped into a churning 35-footer at Makaha on December 4, 1969, jumping off the back of his board just as the giant wall exploded around him,” writes Warshaw. “It was the largest wave ever ridden and remained so for more than 20 years. It was also Noll’s last big-wave hurrah. ‘That day at big Makaha,” he wrote in Da Bull: Life Over the Edge, his 1989 autobiography, ‘was like looking over the goddamn edge at the big, black pit. Some of my best friends have said it was a death-wish wave. I didn’t think so at the time, but in retrospect, I realize it was probably bordering on the edge.’”

SURFER’s thoughts and prayers go out to Noll’s family, friends and loved ones.