Carissa, Steph and Tyler Head to the Quarters 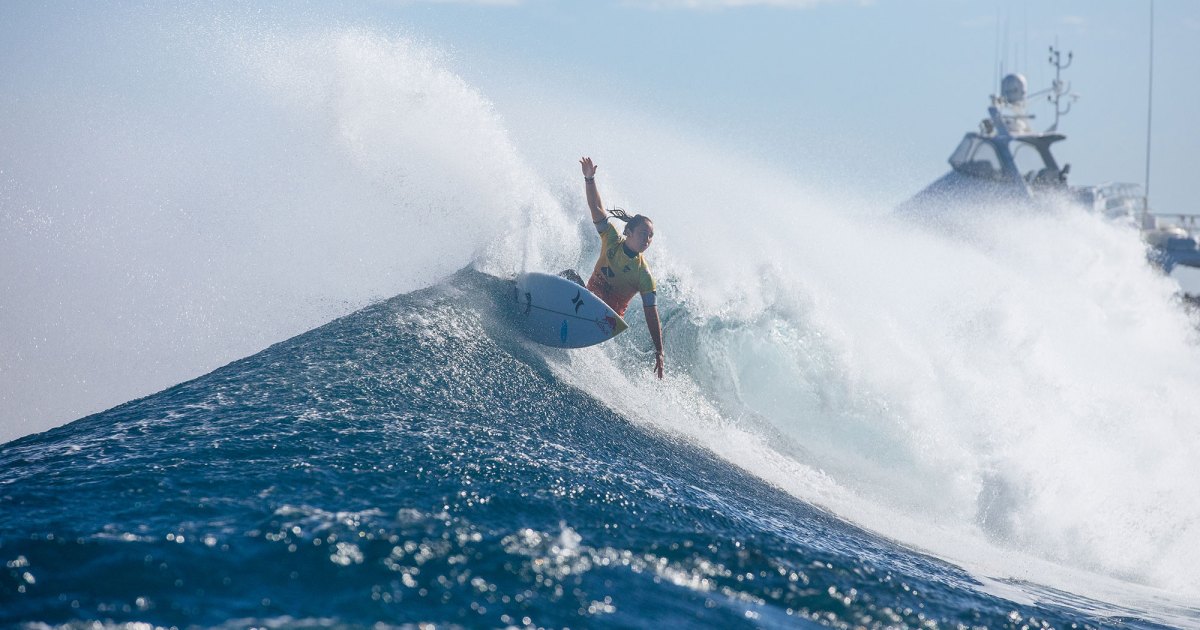 After a weekend of non-stop oversized surf bombarding Main Break, yesterday was by far the tamest day of waves at the 2021 Margaret River Pro. In clean, 3-to-4-foot waves, the women’s ‘CT went head to head in an elimination round to determine who would be competing in the quarters when competition resumes again. Hit play above for a recap of yesterday’s action and continue reading for info from the WSL:

The lone West Australian left in both the men’s and women’s draws, Bronte Macaulay (AUS), had the weight of the state on her shoulders when she came up against current World No. 2 Caroline Marks (USA) in the opening heat of the Round of 16. Marks, fresh of a win at the last event at North Narrabeen, got the matchup off to a flying start, posting her combination of scores early in the heat. Macaulay played the patience game and it paid off, posting her heat-winning total on her last two waves in what was an impressive back-and-forth between the two goofy-foots.

“It’s always nerve-racking being in the first heat of the day,” Macaulay said. “It means so much to make it out of that round. I really need a decent result and it would be nice to get a good one here. Caroline is so solid, so I knew that was going to be a tough one and I kept telling myself ‘It’s your time.’ It’s nice to compete at home. I feel happy and content when I’m in a familiar place and surrounded by friends and family. I’m stoked to get through and think it would be the best thing ever to win this event.”

Johanne Defay (FRA) will take on the local hero in the first Quarterfinal matchup after eliminating injury replacement Amuro Tsuzuki (JPN), Japan’s first female surfer on the CT in over two decades.

Current World No. 1 Carissa Moore (HAW) is through to her fourth Quarterfinal this season but the win to get there was not without an incredible fight from opponent Macy Callaghan (AUS) in Heat 5. Callaghan posted an excellent 16.17 combined score (out of a possible 20), with an excellent 8.67 and 7.50, but even with the second-highest heat total of the round, could not overcome Moore’s 16.93 two-wave total.

Similar to Moore, seven-time WSL Champion Stephanie Gilmore (AUS) had to work hard in the slow conditions to overcome good friend Nikki Van Dijk (AUS). Both surfers posted mid-range scores, but it was the experienced Gilmore who pulled away with the lead, posting a 7.17 (out of a possible 10) with her trademark frontside style. Gilmore will look to break into the Semifinals for the first time in 2021 when she matches with 2017 event winner Sally Fitzgibbons (AUS) in Quarterfinal 4.

“It’s always tough coming up against your friends,” Gilmore said. “Nikki actually came and lived at my place for three months last year and we surfed a lot together and formed a really good friendship. It is tough to meet each other in a heat, but you tend to meet friends in an event eventually and business is business. That was a hard heat as well with not too many waves, so I feel lucky to have gotten the win.”

Tyler Wright and Isabella Nichols Bounce Back with Quarterfinal Entries

Four-time finalist at Margaret River, Tyler Wright (AUS), has not surfed an event here without making it to at least the Quarterfinals and today she continued that trend, overcoming Brisa Hennessy (CRI) in Heat 4 of the Round of 16. Less than one point separated Hennessy from upsetting Wright’s event record but she could not find a scoring wave to advance. Hennessy exits in 9th place for the fourth time this year, still chasing a Quarterfinal breakthrough.

After two 9th place finishes herself, Wright’s Quarterfinal entry puts her back into Final 5 conversation on the Road to the Rip Curl WSL Finals. Wright will match with Tatiana Weston-Webb (BRA) in Quarterfinal 2.

“I feel like I made a few mistakes in that heat that I shouldn’t have made,” Wright said. “Strategically, my heats on the east coast were better than that, so I definitely need to tighten that up, that’s for sure. Other than a few mistakes particularly late in the heat, I’m glad to make the heat. Unlike the east coast events, Main Break is pretty straightforward with one take-off spot and generally two main sections to score from, so it won’t take too much to fix what needs fixing and move on.”

In the closest heat of the day, CT rookie Isabella Nichols (AUS) narrowly got the win over Keely Andrew (AUS) in Heat 6. The heated exchange saw incredible commitment from the competitors as they navigated the shallow end-section. In the dying minutes of the heat, Andrew threw down a big closing maneuver, but the judges scored it 0.2 points shy of the requirement.