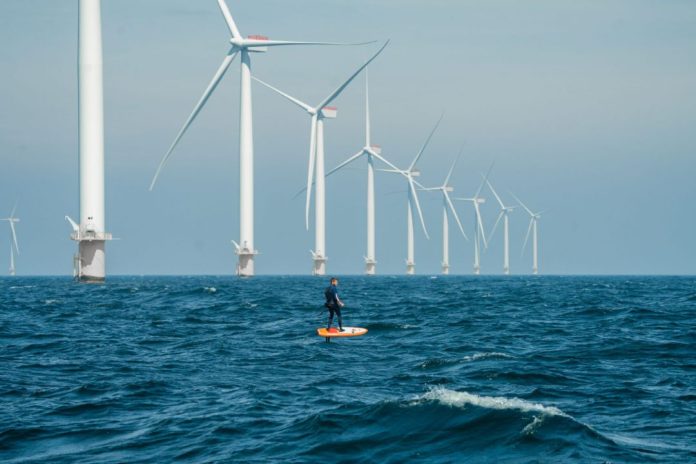 After months of intense training and then watching for optimal conditions to launch, Casper Steinfath set off to cross the Kattegat Sea on his hydrofoil. This act of crazy, courageous waterman skill took him across the waters between Denmark to Sweden with only a paddle in hand.

Casper, a 6X SUP World Champion, has no fear of the elements and is constantly seeking new challenges. After receiving the all’s clear to launch from his team with winds holding strong at 20-25 knots, Casper departed from Grenaa in Denmark in the early morning hours on his Naish hydrofoil (Jet HA 1400, 85cm mast, and 95L Hover board) trading land, once again, for the endless open sea. He was headed to the coast of Sweden across the Kattegat Sea.

An extreme physical as well as mental challenge such as this 128km crossing of the rough Kettegat would test the most seaworthy athletes. But, Casper’s careful months of meticulous planning and tenacious training led him across this tumultuous sea. In the end, he almost didn’t make it.

On the Brink of Exhaustion:  Casper Makes a Surprising Decision

With only seven kilometers to go, the wind died suddenly and the waves faded. Near the brink of exhaustion, Casper’s ferocious willpower was tested. He had to make the decision whether to call it quits and get on the boat or attempt to push through and paddle his way to the finish line.

The temptation to give up started sneaking its way into the back of my mind. I could see land, but I could not ride my foil the last stretch to shore. I considered getting on the boat. But just as quickly, thought, ‘HELL,NO.’”

Not surprisingly, the Danish Viking chose to finish what he started and kept fighting.

In his own words, Casper Tells the Tale of a Harrowing Finish

“Well after more than 110km behind me and less than 10km to go, I ran into some unforeseen and serious problems. My legs were shot, the wind had pretty much died, and the bumps were disappearing quickly. Hardly ideal for foiling!

At this point, I had some very negative thoughts going through my head. I was so close, yet land seems so far when you’re exhausted. The temptation to give up started sneaking its way into the back of my mind. I could see land, but I could not ride my foil the last stretch to shore. I considered getting on the boat. But just as quickly, I thought, ‘HELL,NO.’”

After sitting down and gaining my breath for a few minutes, I realized that although my legs were flooding with lactic acid, my arms were still somewhat intact and powered up. So, without much thinking, I just lay down on my stomach and started prone paddling towards shore. It is a motion I have spent thousands of hours doing in my life, but as anyone who has paddled a surfboard will tell you, it is a hard position to sustain for very long.

As I fought my way closer to shore, I could feel all my energy leaving my body. I was done. But then, out in the distance, I saw this figure come paddling towards me on a SUP. The figure had a special paddling technique which I only know of one person who paddles like that. It was my long time Swedish coach Magnus Lindstedt.

Magnus and a few other Swedes had paddled out from shore to help motivate me to keep fighting to the finish. As Magnus neared, my eyes filled with tears. I was so happy to see him! It had been over a year since we had seen one another. And, his presence helped me find the last of my energy to make that final stretch to shore.

I don’t know if I would have made it without the encouragement and escort of Magnus and the Swedish cavalry. I guess sometimes we all need a team to help us make it to the other side.”

The lighthouse at Bua Harbor came into view and Casper arrived in Sweden after 10 hours and 42 minutes on the open sea. Casper Steinfath made waterman’s history at that moment as the first person to cross the Kattegat Sea, from Denmark to Sweden, on a hydrofoil.

“It just did not go as I expected and instead into much more than a simple battle of crossing an ocean. Kattegat gave lots of resistance and did not make it easy, but that made it even more rewarding and meaningful to complete this adventure,” said Casper.

Here, at Standup Journal, we celebrate those athletes who push beyond the boundaries of what we once thought was possible to create new horizons for all.
We thank you, Casper Steinfath, for your vision and strength. We salute you!