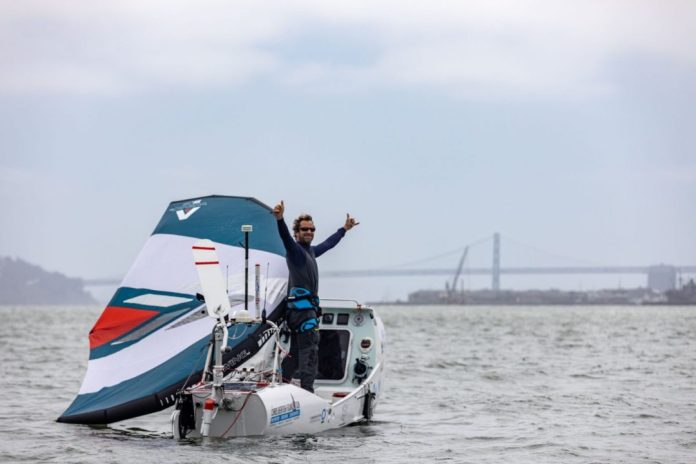 Chris Bertish to Launch from Half Moon Bay, CA

Half Moon Bay, Calif. (June 8, 2021) – Chris Bertish, motivational speaker, author, big wave surfer, Guinness SUP World Record holder and passionate ocean conservationist, is leaving shore behind today. He will plan launch later this afternoon (12:00 PST) from Half Moon Bay in California to begin his 2,750 mile solo and unassisted wing foil journey across the Pacific Ocean and officially begin the Transpacific Wing Project. Bertish’s route will take him from Half Moon Bay, California to Oahu, Hawaii. He will be towed out two miles from Mavericks outer buoy to launch by 12 p.m. PST.

The watercraft he rides includes hydrofoils and measures 19’ long and 3’ 7” wide (5.8 by 1.1 meters).  Known as the ImpiFish, the craft was custom built for Bertish to complete his 2017 solo paddle journey across the Atlantic. Today, it has been updated and significantly modified to include advanced satellite communication systems, radar, GPS, hydrofoils, and a wing to harness the wind for his adventure across the Pacific. Traversing this distance will require Bertish to wing a minimum of 10-15 hours per day, over sixty consecutive days, unsupported and without boat support.

“We are stronger than we realize. If we set our sights on a goal and overcome a challenge, we can get through anything,” says Bertish. “I want this voyage to highlight the ocean health challenges we all face and be a visual reminder that together we can cross an ocean of challenges, change and uncertainty if we choose to work hard at it and never give up—no matter what.”

During the transpacific crossing, Bertish will collect data for research by posting regular Captain’s Log updates which document valuable ocean temperatures, PH levels and noise pollution. This crossing is also a key instrument in giving back to education during the expedition by providing live ocean classroom sessions—a world’s first from the middle of the ocean. The ocean-themed lessons will focus on ocean health and climate change challenges, giving students actionable tips on how they, too, can make a difference in this imperative race against time.

The Transpacific Wing Project raises awareness and funding for charitable organizations and global initiatives including Sea Shepherd, Conservation International, Ocean Unite and ocean education and sustainability programs. All these beneficiaries will benefit through the Chris Bertish Foundation, a 501c3 organization established in 2020 with the goal of building awareness, giving back and being a beacon of inspiration and positive change for youth and the world.

To get involved and stay updated during Chris’ journey, stay tuned here at www.standupjournal.com or join the adventure at https://chrisbertishfoundation.org/wing-project/.

Mahalo for all your efforts, Chris. God speed out there! Enjoy the journey.

Chris Bertish is driven by passion and commitment and has achieved some of the greatest feats in surfing and stand up paddle boarding history. He is a waterman dedicated to turning adversity into opportunity and believes no challenge is too great or impossible. As an international speaker, Chris inspires his audiences with stories of courage, determination, resilience and overcoming insurmountable odds to achieve his goals and dreams, all the while raising awareness for challenging ocean conservation and climate change issues globally.

Chris won the 2010 Mavericks Big Wave Invitational event in Half Moon Bay, California in some of the biggest waves in history, hours after touching down from a 36-hour flight from South Africa, on a borrowed board, and against all odds. In 2013-2014, Chris set three separate stand up paddle World Records including the 12-hour SUP Guinness World Distance Record. In 2015 he co-directed and released the acclaimed film Ocean Driven, and launched the best-selling book Stoked! both about his life story.

In 2017 Chris redefined adventure by stand up paddling solo and unsupported across the Atlantic Ocean, over 4,000 miles from Morocco to the Antigua in 93 days, raising money for Operation Smile and in support of youth, education and ocean conservation initiatives.

The Transatlantic SUP Crossing won Chris the global “Expedition of the Year Award” at the 2017 US Global SUP Awards. He was named one of the Top-100 Genius Icons, by Global Genius 100, Leaders of Innovation and Creativity, by the Einstein Institute in 2018.

His second film, “Last Known Coordinates” about his epic transatlantic stand up paddle journey is set to launch globally in mid 2021.