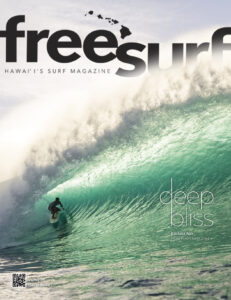 One of the great things about surfing is the democratic nature of the pursuit. Even the most prestigious venues are essentially open to all. And, while this month’s surfer featured on the cover, Kaulana Apo, is far from a novice, he’s not one of the first names you’d associate with snagging the wave of the day at one of the most illustrious waves on the planet – Pipeline. Apo was a top junior who used to spar with the likes of Imaikalani DeVault, Benji Brand, Koa Smith, and the Moniz Brothers. As it does for many of us, surfing took a back seat to life for some time for Apo, but in the last year he’s been as psyched as ever, and clearly finding his old form. These days, Apo is actually roommates with his gromhood friend Seth Moniz and the reignited passion has been contagious, inspiring Moniz to put in more water time than he has in years. In an effort to keep the cover a surprise to Apo until the magazine goes to print, we reached out to Seth and Josh Moniz for this month’s cover story. Seth was in Tahiti on a last minute strike mission and sent a few enthusiastic texts, so Josh summed up their excitement for their dear friend finding his way on to page one.

Hey Josh, we wanted to keep this cover to be a surprise for Kaulana until it comes out in print, so I was hoping I could do something in the meantime with you and Seth – but Seth’s in Tahiti.

Sick! When you first texted me, I opened up the text and saw the cover shot, and I was actually with him.

Oh no. Really?
I was with him. And I was like, “Oh my god,” just freaking out.
It’s the best cover shot I’ve seen in a while. It looks so sick.

Did he figure it out?
No, he has no idea. <laughs>

So I hear Kaulana is living with Seth, is that correct?
Yeah. We first met him on the westside when he was like six or seven. And, he was just everyone’s favorite surfer from that point. When we got a bit older he didn’t stop surfing, but he kind of went and did his own thing. But this year, we really reconnected in our friendship and he moved into Seth’s and he’s been putting Seth on the craziest program. All they do is surf and train, and they’re having the most fun. He’s been surfing so well. So to see him get the cover, I’m so happy for him. It’s been like six months for him, like proper surfing again. And he’s already got the cover. That’s insane.

It’s good to have people in your life that recharge your amp to surf. And it sounds like as he’s finding his stoke again, that it’s rubbing off on you guys too, you know?
For sure. That’s one of the biggest bummers that I can’t surf. (Josh is still rehabbing from his injuries suffered during a freak accident surfing in Portugal over the summer). Because he’s so psyched to surf all the time, this is probably the most I’ve seen Seth surf in a while and it’s because of Kaulana. They’re in the water all day.

Hopefully, he’s not gonna see this cover until it comes out in print. What do you think his reaction is gonna be when he sees the cover?
I don’t know if he ever got a FreeSurf cover when he was younger? He might have? Growing up, that’s all we waited for was the latest FreeSurf magazine. It’s the sickest thing for him to get a cover. And in just like six months back of really surfing, and he gets his first Pipeline, legit cover, he’s gonna be tripping. I can’t wait.