COVID-19 is Spurring a New Kind of Localism 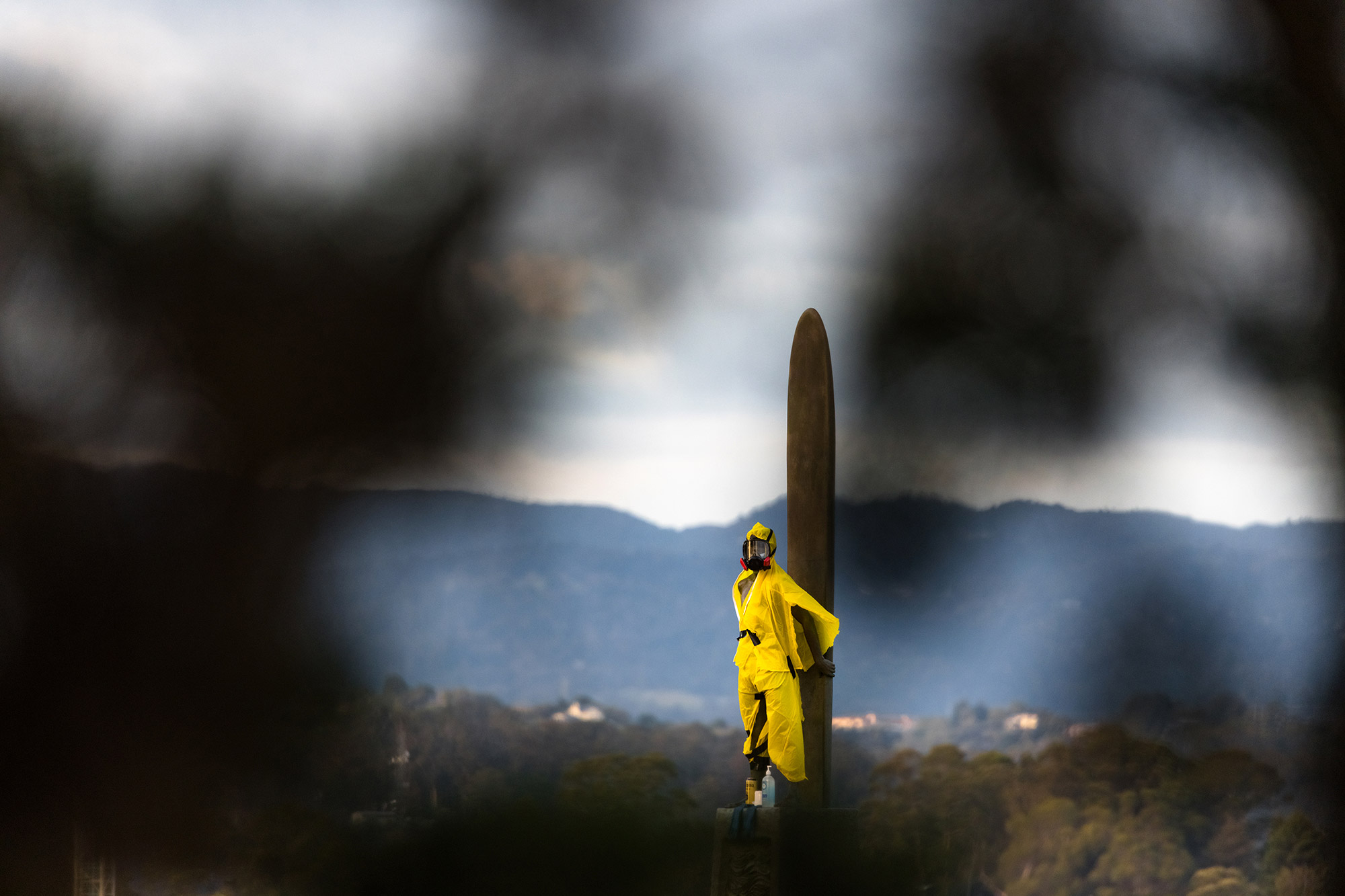 In March, coastal communities around the world closed their beaches in an attempt to curb group gatherings and stop the spread of COVID-19. Now, as certain governments begin to relax restrictions and reopen beach access, some areas are showing a resurgence in a different kind of enforcement, with some surfers trying to regulate their lineups as a means to keep their spots overcrowded by visitors.

This week, The Sydney Morning Herald reported that in parts of Sydney, Australia, surfers have invoked a bit of old-school localism, posting signs near the beach saying things like “If you don’t live here, don’t surf here”, “If you decide to come out anyway, it’ll be a short surf anyway”, and “You’re putting our community at risk.” Some signs were even mocked up to resemble official council notices.

“There’s definitely been some grumbling because there [have] been a heap of people surfing,” says Sydney-based surfer and longtime surf writer Nick Carroll. “So many people are working from home, etc., plus every kid is homeschooling. That’s meant a lot of people in the lineups.” When asked if he’s seen more signs than usual, or witnessed any aggressive behavior, Carroll continues: “There have been a few of those signs around, ‘If you don’t live here, don’t surf here, respect our community’ whatever, but they feel pretty feeble to me, they’re always anonymous, so it’s kind of pathetic.”

Outside of Sydney, other “locals-only” signs have been less aggressive — like in a town south of Ulladulla, NSW, where, prior to Easter weekend last month, people put up signs pleading with out-of-towners to go home out of respect for their local community’s fight against COVID-19. “We respectfully ask if you don’t live here don’t risk lives,” one sign said. “Our hospital can’t cope so please go home. You may pass on COVID-19 to the community unknowingly.” One sign even had a photo of nurses decked out in PPE and masks posted to the top of it.

I’m from Northern Beaches where vile signs like this have sprung up. Beaches are for everyone pic.twitter.com/96cCL2nSt8

While it’s likely some of these signs were posted in good nature to prevent an influx of people with the potential to spread COVID-19 in beachside communities, others see them as a potential byproduct of a resurgence of territorialism.

“I think it’s ridiculous, really,” says former Surfing Life editor Chris Binns. “The spots that have always had the most hardcore gnarly locals, are suddenly now the same guys that supposedly care the most about the health of their communities. There are so many signs going around Sydney. But really it’s [Coronavirus] just an excuse to vindicate years of bad behavior.”

The good news, according to Carroll, is that those signs (and the people who made them) are the exception, not the rule. “If anything, I actually think maybe there’s a new sense of bonding in many local surf communities,” he says. “Everyone’s surfing a lot together and enjoying the companionship in the water. The flip side of territorialism, perhaps.”

In California, tensions have been running high between surfers in certain areas since the beach closures initially began — especially on social media. On Instagram and Facebook, some surfers in Oceanside blamed the rest of San Diego for their beaches closing in early March. Other residents in Newport and Huntington Beach digitally pointed fingers at out-of-towners for their beaches getting shut down after thousands of people flocked to their shores a couple of weekends ago.

In Northern California, some people are worried that crowds returning to the beach after their reopenings could not only increase the risk of spreading the virus, but also motivate officials to shutter beach access once again.

“I think the beaches reopening across the county gave everyone an immense sigh of relief, but then by the next weekend the local community was panicking,” says Santa Cruz shredder Noah Wegrich, who admits to there being more bad vibes in the water than usual after Santa Cruz county reopened their beaches a couple of weeks ago. “It’s totally understandable; locals are mad that out-of town-people are here and not obeying the shelter-in-place orders. We have a massive population just over our local mountain range here that also loves to enjoy our coastline, which, under normal circumstances is acceptable. The scary part for Santa Cruz county is there were so many more cases inland and…thousands of people came to our beaches every day after the beaches opened, causing crowds of people, which in turn potentially causes the spread of this virus.”

A statue in Santa Cruz, dressed for the times.

Wegrich, like others, is worried the county will shut down beach access again. “It seems that people aren’t getting the message and taking this very seriously anymore,” he says. “I’ve heard rumors that they are going to close the beaches on the weekends and then limit access during the weekdays (10 a.m.- 6 p.m.), which would be a huge bummer for local residents who created their life around the ocean and this community.”

Also in Santa Cruz, SURFER photographer Ryan “Chachi” Craig says that while he hasn’t witnessed anything violent, he is seeing the change in the way surfers are treating one another. “My friends and I have been talking about how ironic it is that this is the first time in recent memory where it’s encouraged to be protective of your surf zones and keep crowds at bay,” says Chachi.

Earlier this week, a Bay Area writer named Zoltan Istvan — a self-described transhumanist — published a controversial Op-Ed piece in The New York Times, wherein he admitted to circumnavigating shelter-in-place rules to surf in Bolinas recently, drawing attention to a normally uncrowded spot and effectively encouraging others (who could potentially be carrying COVID-19) to also flock to the beach. Afterwards, he took a virtual beating on his Instagram, with people spitting vitriol at him from all angles. Surfers in Bolinas even took it upon themselves to plaster “Go Home Zoltan” posters all over town. According to an IG post from Istvan on Instagram, he “received numerous violent threats over the last 72 hours from Bolinas locals, including a death threat” and over “50+ comments on Instagram warning me never to come back.”

My weekend’s New York Times Op-Ed mentions the small seaside town of Bolinas, but the article is really about the 35 million surfers around the world wondering if the lockdown law against surfing is fair. Many Bolinas locals didn’t like my article nor me coming into their town to surf, where I’ve surfed on and off for 15 years. They banned together to put up these posters all over town about me. Fair enough; it’s a free world to put up posters and not like someone. Unfortunately, I’ve also received numerous violent threats over the last 72 hours from Bolinas locals, including a death threat (all screen shots saved and FBI notifiied since I’m a Federal candidate). As a father, son, and husband this is not acceptable. I look forward to surfing in Bolinas again when it’s legal for me to come in, despite 50+ comments on Instagram warning me never to come back. Also, I believe there are overall health benefits of surfing for society during the #coronavirus that outweigh the tiny risk of transmission, and people would be wise to try to recognize that too in this debate, as millions of surfers have and agree. Finally, it’s not wise to threaten a journalist and public figure if you’re trying to stay private. The exact opposite will likely happen, especially one who knows literally hundreds of journalists and TV crews. #gohomezoltan

In other places, locals are working together on ways to make surfing a safe activity by self-governing their lineups in cooperation with each other. In Bali, where beaches have been locked down for a month, surfers in Bingin are gearing up to experiment with a system to allow locals back in the ocean while maintaining social distancing. According to a photo shared by Rizal Tandjung, local Bingin surfers with proof of ID will be allowed out in the lineup, six at a time, and will be required to stay six feet apart and use a priority system. It’s TBD how well the system will work, but it’s an interesting approach. Bingin is unique in that it’s a small and tight-knit beach community, so it should be easy enough to distinguish a local from a non-local and enforce the new rule in a civilized, non-violent way out there.

In the Outer Banks, North Carolina, local surfer and tube hound Brett Barley has also been encouraging others to work together to keep their distance in the surf. “There’s no ‘localizing’ or anything like that happening here,” Barley tells us. “Though I did make a point to be vocal about keeping lineups to 8- to-10 guys or less, and I even made a sign [laughs]. Honestly, we’ve had so much surf, that everyone has just been kinda cruising in their own zones anyway, so, for the most part, it’s all really mellow.”

Now, as public officials and businesses are beginning to figure out how to safely come out of lockdown, surfers too seem to be wrestling with the idea, with some handling things better than others. And while discouraging groups of people from congregating in crowded lineups is good for social distancing, so far the CDC has yet to endorse waxing windshields, making violent threats or slashing car tires in the name of COVID prevention, so it’s probably best to leave those practices in the past where they belong.