There exists a certain orthodoxy in the elite realm of competitive surfing. With the slightest deviance from accepted norms being hyper-analyzed and critiqued. Surfing on a certain level is defined by risk, so for the top-competitors it’s all about limiting risk, as opposed to knowingly introducing it. Dane Gudauskas has long freed himself from the confines of competitive hegemony, and has pursued a life of surfing experimentation. It was no surprise to see the lank goofyfooter bring the same zeal for creative exploration to this year’s Vans Triple Crown.

What was your thought process for approaching this event with non-traditional equipment?

The whole concept behind trying these boards was to challenge myself to see the waves differently, and maybe learn something that I had left unturned in competition.
Usually when you’re riding these waves, the venues of the Vans Triple Crown, you’re trying to max out your performance for a score. But, I wanted to ride these boards to open my mind up, learn something new about those waves, and how you can ride them. Which maybe, you can only access through boards that would really challenge you to look at these waves differently. 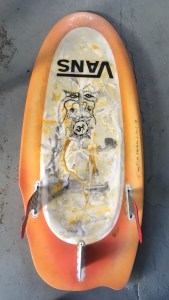 Which boards have you been riding?

I have a Ryan Burch, 5’9” Keel twin-fin. The amount of speed and drive that board carries is just unparalleled. Yet, somehow the design allows you to break your line and still be able to maneuver and pivot which I was stoked on. I was riding it at Hale’iwa, and you can cover so much ground on bottom-turns, top-turns, and really drive to the end section. That board really allowed me to position behind the bowl for a big bottom turn, and really accelerate around sections faster than I’m used to.

A 4’2” Donald Brink, which is called the Ubuntu, which I believe roughly translates to “humanity,” or “we are all one.” It has a huge concave right before the fins. I’m riding it with S-wing fins, which you may have seen on some of Tom Currem’s boards. Being that it’s such a short board, I thought these fins would really accentuate the rail line.

Also, an 8’6” Owl Chapman. You see Owl at Sunset all the time, you know his legacy, and his influence on surf culture and board building. To be able to ride one of his boards at Sunset, especially on a day that was big enough to really utilize the design that it was built for, was something that was so special.

What are your thoughts on the digital format of the Vans Triple Crown?

I think it was amazing that Vans was able to adapt to the landscape and provide this platform for so many people who wouldn’t normally have the opportunity, myself included. Everyone had fun and got to enjoy surfing the venues at their own pace. I thought it was a great concept, and it’s only the beginning.