Dunkerbeck Smashes Record for Top Speed on Windsurfer at 103.67kph 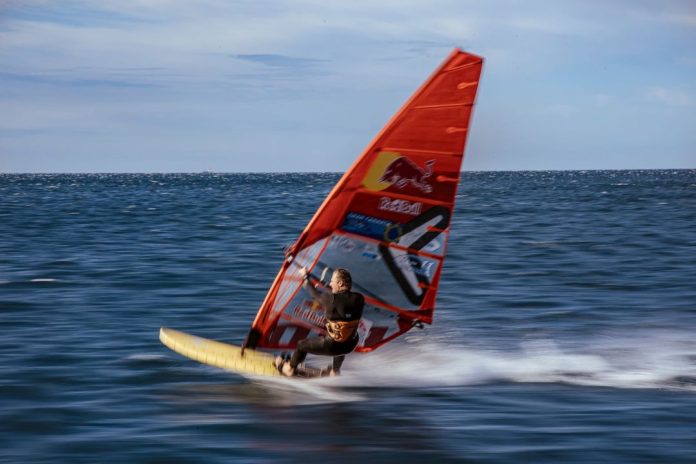 Björn Dunkerbeck, at 52 years old, just smashed another speed record to add to his – already – legendary windsurfing career with the fastest ever time recorded on the water with a top speed of 103.67kph during the Lüderitz Speed Challenge in Namibia.

Ever since French windsurfer Antoine Albeau broke the 50-knot barrier, Bjorn Dunkerbeck has been on a mission to reach 100kph during his career.  In case you’re late to the game, that career began in 1986 and features over 100 Professional Windsurfing Association (PWA) titles and numerous PWA Wave World Championship crowns as well.

Dunkerbeck’s first speed record is nearly 30 years old. At that time, he hit 43.30 knots (80.1kph) in 1992. Since then, he has utilized the unfolding technology that measures speed and the newest innovations in windsurfing equipment to keep chasing the next milestone. He’s landed in the record books again last week with what may be his most memorable achieving over 100kph.

At 52 years old, the Dutchman knows that hitting such tremendous speeds on the water requires an extraordinary amount of skill, years of wizened experience and deep knowledge of equipment. Ultimately, it’s also about landing at the perfect spot under optimal wind conditions to make this record-breaking run possible.

On Thursday, November 18, on the south coast of Africa in Namibia, Dunkerbeck broke that speed barrier, hitting 103.67kph over a two-second time gap and holding an average speed of 101kph over a 100m stretch of water.

The site of the record, Lüderitz, has become famous for ‘The Ditch’ – a 500m long canal where the water stays flat even when the wind howls – making it the perfect place for speed testing as long as you don’t crash.

Dunkerbeck explained: “No crashes. I try not to crash at that speed because if you do, your day is over.”

While he had fast runs over the last three weeks, he knew he needed the perfect day to break 100kph with consistent gusts of strong wind to finally allowing him to break 100kph at least five times.

After five years of attempts and months waiting around the barren, inhospitable, wind-blasted sands of Namibia, Dunkerbeck revealed: “We had quite a few days of wind around 35-38 knots, so the equipment was feeling really dialed. I was on a 40cm-wide AVBoard speed windsurf board, with a 19cm fin and a 5.5 Severne Mach 4 Lüderitz Speed Challenge LT sail. It all had to work perfectly to hit top speed!”

Despite his age, Dunkerbeck is fired up and now wants to maintain 100kph for over 500 metres. If you know anything about this waterman legend, you won’t want to bet against him achieving that goal.