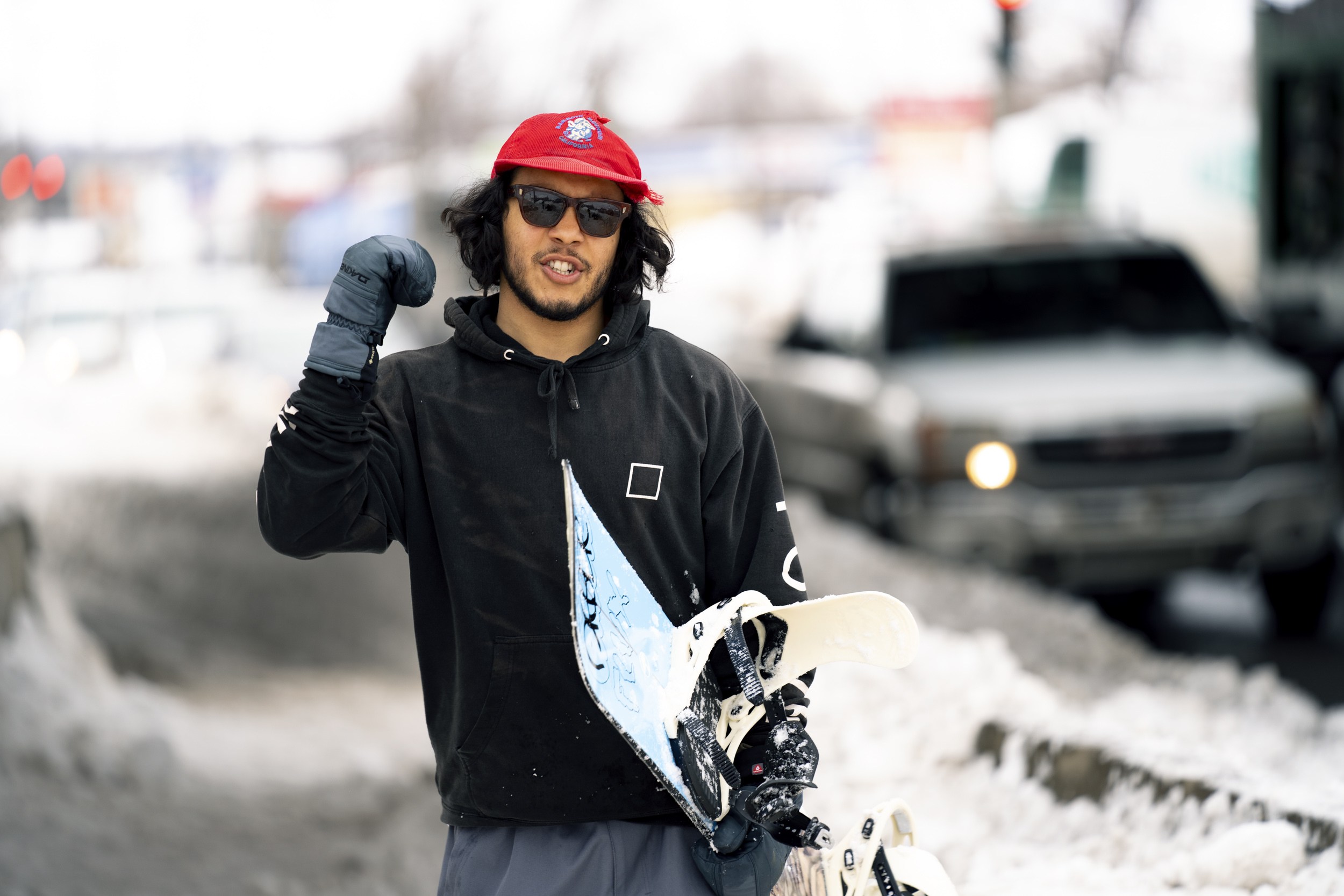 Two years ago, in recognition of an ever-impressive pro career that includes lauded video parts, impeccable style, and most recently, the release of El Sueño, Erik Leon was given the nod to create his first pro model products: a signature Airblaster jacket and pants. As he started to deliberate styling, fabric, and features, Erik couldn’t escape the feeling that there had to be more to the process than just stamping his name on something. He wanted to contribute to the snowboard community in a bigger way. So, he came up with CORE, an initiative rooted in creating sustainably made products at an affordable price, as well as giving back to the community through events and partnerships with non-profits. Erik’s other sponsors, Flux Bindings and Arbor Snowboards, signed on to create pro model pieces, too, and Erik began to collaborate with these brands in earnest to make a difference. Flash forward to the 2021 season and the first CORE signature items are hitting shelves, providing sustainably minded, affordable gear backed by one of snowboarding’s finest handplanters. For Erik and CORE, this is just the beginning. – Mary T. Walsh

So, what is CORE?
CORE stands for Community Outreach Riding Equipment, which is everything that I believe in, in snowboarding. The guidelines of CORE are sustainability, price point, and community outreach programs. Through CORE, I’m going to do the best that I can to contribute back to snowboard-ing. The first step was making my signature products—a snowboard with Arbor, bindings with Flux, and outerwear with Airblaster—in line with the CORE values, in terms of sustainability and price.

We started working on my line of signature Airblaster outerwear in December 2018. As I was thinking of graphics and colors, I was like, Man there’s got to be more. I felt like I was just putting more things out onto the Earth to be consumed and there wasn’t enough giving back. So, we came up with CORE. Airblaster’s owner, Jesse Grandkoski, is all for the good of snowboarding. He had millions of ideas and let me use Airblaster as the backbone to build CORE up and really make it into its own brand.

It’s been the coolest thing I’ve ever been a part of, for sure. To see how things can evolve—where an idea you have in the shower can travel and in tow years, you see the final product. It’s like holy cow, if you’re persistent in anything that you want to happen, it can happen 100%. If you told me I’d be doing something like this five years ago, I would have been like, You’re batshit crazy. I don’t have it in me. It’s totally the idea that if you put your mind to anything, you can do it.

How did the three tenets of CORE come to fruition?
I didn’t grow up with a lot of money. There was a moment where I only ran hand-me-down gear. All my friends gave me their old snowboards, old snowboard pants, boots, and bindings. When I was about 15, I didn’t have a board sponsor, I couldn’t get a job, and my family couldn’t afford snowboards. There’s a board shop in Big Bear called Getboards and they loaned me rental snowboards to ﬁlm for Sunday in the Park. About two weeks later, Arbor gave me a snowboard and after that, I started working with them full-time. If it wasn’t for that snowboard shop believing in me, I wouldn’t be where I am today. I think it’s the most responsible thing to do my best to make snowboarding more accessible by making signature products that sell at price point and through giving back to the community. I hope that down the line, somebody who is in similar shoes as I was growing up can afford the snowboard that they want. I want to make snowboarding more accessible and break down the barriers of entry.

How does sustainability fit into CORE?
I grew up in Riverside, California. It’s kind of a concrete jungle. Transitioning to snowboarding and being out in nature, up in the mountains, out on the rivers, and seeing stuff that’s untouched put me in a more environmental mindset. I want to positively affect where I love to live and play. In my opinion, any sort of sustainable stance that we can take is better than none at all, whether it is a 100% recycled jacket or 10% recycled fabric in a jacket. Taking better steps for the future. We can’t sell recycled gear, but what we can do is create product that is being made with sustainable mindsets, so at least we’re doing our best to keep the environment intact.

I’ve been vegetarian for ten years and I’ve never told anyone that they should be vegetarian. Everybody’s entitled to their own opinions. I just hope that maybe someone purchases my Arbor snowboard because they like the graphic, and then they find out that sustainable steps were taken to make it. Or if you’re into sustainability but you have no idea who I am and you find out about the snowboard—it’s like this wheel that keeps rolling, right? It all contributes for the better. If I can do something to positively inﬂuence the environment and the people around me, I’m going to do my best to do that. I want to impart a world perspective on things that we can change and contribute to by just being snowboarders. Things have come a long way, but I’m hoping that it just goes further.

What about CORE’s community outreach?
There are so many non-profit organizations that do so many great things for snowboarding and I want to help bring aware-ness to them. I think the best way to do that is to organize events across the United States and reach out to non-profits in the local areas. Say in Minneapolis, working with Joe Sexton and Jake OE on Cool Meets Cause or working with the Shred Foundation in New York to share the experience of snowboarding with each other.

Where do you want to take CORE in the future?
In the perfect dream world, what I would really like is to have another professional snowboarder representing CORE with me. I want to bring CORE to light, but I don’t want it to be strictly tied to me. Over time, I hope that CORE can be a stamp of approval for products that hit guidelines of sustainability, affordability, and giving back to the snow-boarding community. Its own entity. Hopefully a professional snowboarder is reading this and is interested. If you are, hit me up because I would love to work with you!