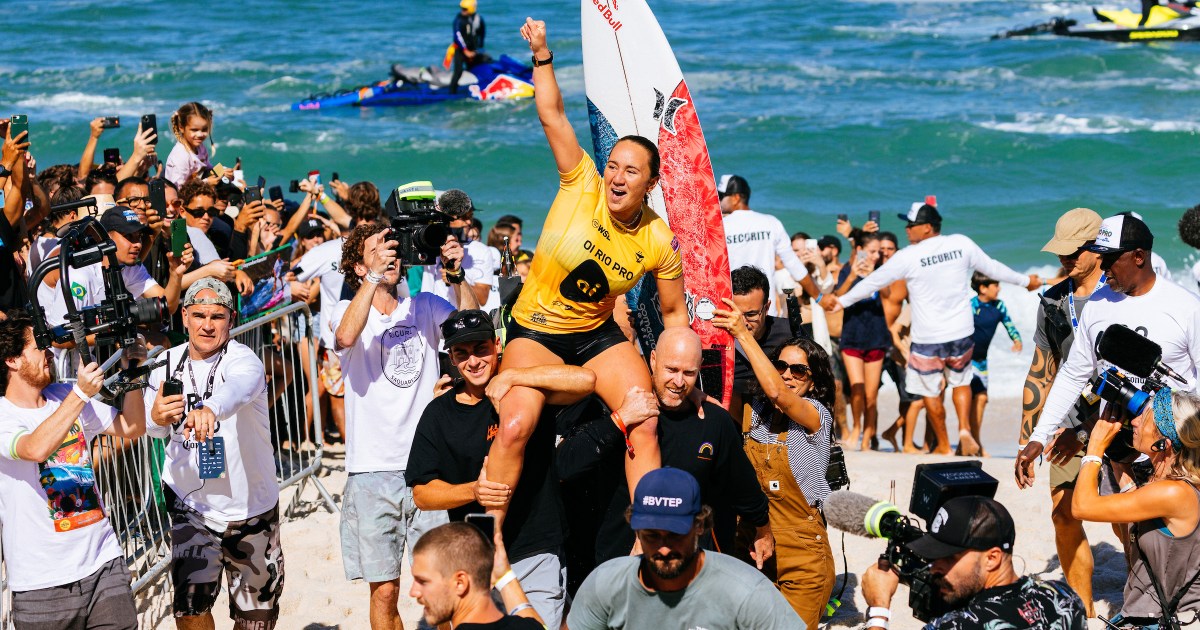 Carissa Moore and Filipe Toledo just expanded their lead on the ‘CT rankings with wins at the Oi Rio Pro. In front of an extremely packed beach, the Brazilian superstar and the queen of Oahu claimed victories for event No. 8 and will be going to J-Bay with yellow jerseys on their back (which doesn’t really mean much anymore, but they’ve also secured spots in the WSL Finals, so there’s that). It was an exciting final to be sure, so if you missed it, replay above and below, and continue reading for the WSL’s recap of the day:

“The competition finished off in spectacular fashion in front of a huge crowd at Praia de Itaúna in Saquarema, Brazil. Five-time WSL Champion Moore defeated Johanne Defay (FRA) in the Finals, while Toldo took out rookie Samuel Pupo (BRA), to earn his third-straight event win in Saquarema and his fourth overall at the Oi Rio Pro.

Current World No. 1 Moore has been consistent throughout the 2022 CT season with three 2nd place finishes in addition to her 1st place result in Saquarema. Today’s win marks the 25th CT victory of her career and she now has her sights set on another possible World Title at the Rip Curl WSL Finals at Lower Trestles from September 8-16, 2022.

In the Final, Defay got off to a strong start, earning a 7.50 (out of a possible 10) on solid backhand surfing on the predominantly lefthand waves in the 4-6 foot range at Praia de Itaúna. She followed with a 4.83 for a 12.33 total (out of a possible 20). Moore, on the other hand, had two mid-range scores of a 5.50 and a 5.93 with the clock ticking down. But on the last wave of the heat, Moore blasted consecutive backside hacks with speed and progression to earn a 9.50, the highest score of the event in the women’s division.

“This is one of my favorite wins in my whole career,” said Moore. “Coming up against my good friend Johanne Defay is always difficult. She got me in G-Land and I really feel like she’s the one to beat this year. I was behind in the whole heat and I thought that I was probably going to get another 2nd place here, but things went my way. I’ve just had such an incredible week at a house with all my friends, the crowds have been amazing, and I’ve felt a lot of love and support here, so I think that’s what made it even more special.”

In addition to her victory, Moore was able to clinch a spot in the WSL Final 5, extending her lead in the rankings over Defay, Lakey Peterson (USA), Stephanie Gilmore (AUS) and Brisa Hennessy (CRI).

As was the case with the majority of the athletes competing at the 2022 Oi Rio Pro presented by Corona, there was an exhilarating feeling at the event brought by the energy and stoke provided by the most passionate and avid surf fans in the world.

“It’s great to make it to the Finals. But it’s the fans that make it so special,” said Defay from the Award Ceremony.

Toledo is now being referred to as the “King of Saquarema” after winning his third-consecutive event in Saquarema and four total victories at the Oi Rio Pro. After two throwaway scores, Toledo boosted the biggest backside air rotation of the event for a perfect 10-point ride. Toledo also caught one of the longest barrels of the event and added a quick air-reverse on the closeout section for an 8.67. Toledo was unstoppable in the Finals and his torrid pace resulted in an 18.67 total, the highest of the event.

“I feel completely blessed for being in this position and sharing this moment with my family, friends and this amazing crowd,” said Toledo. “I want to congratulate Samuel (Pupo), Yago (Dora) and Italo (Ferreira) who all made it to the Semifinals. It was a historic moment for us Brazilian athletes and the crowd was a class act, showed love to everyone on Tour and made this one of the most magical events ever.”

Samuel Pupo made it to the first Final of his career on the Championship Tour against Toledo. As a rookie, the young high-flyer had spectacular performances throughout the Oi Rio Pro, taking down big names such as Caio Ibelli (BRA), Mateus Herdy (BRA), and Italo Ferreira (BRA) on his way to the Finals.

“Filipe started with a 10 on a wave that I could have blocked because I had priority. He went  left and I ended up going to the right,” said Pupo. “Afterwards, it was difficult to recover because the sea calmed down and not many waves came through, so it seemed that everything was going in his favor. But I’m really happy I made the Final. For sure, this is the best day of my life, but the year is not over and I already really want to compete again. I can’t wait to go to J-Bay and do my best there,” completed Pupo.

In what was one of the most emotional moments of the Oi Rio Pro, the inaugural Mano Ziul Award was presented to honor a visionary and pioneer in the sport of surfing. The recently deceased Mano Ziul was able to provide the first webcasts for contests, bringing the most remote locations into the audience’s living room. His creation of the scoring system has been a fundamental part of competitive surfing ever since it was created. To honor his memory, the Mano Ziul Award was given to the men’s and women’s athletes with the highest heat total of the event at the Oi Rio Pro.

Mano Ziul’s family, represented by his wife Sandra and his children Luiza and Ziul (Ziulzinho) Andueza presented the trophies to Carissa Moore for her 15.43 total and Filipe Toledo, who earned an 18.67 total, both in the Finals.

“I want to dedicate this victory to Mano Ziul, who is up there watching us all right now. This win should be celebrated by all of us for everything he has done for the sport of surfing,” declared Toledo from the award ceremony.”