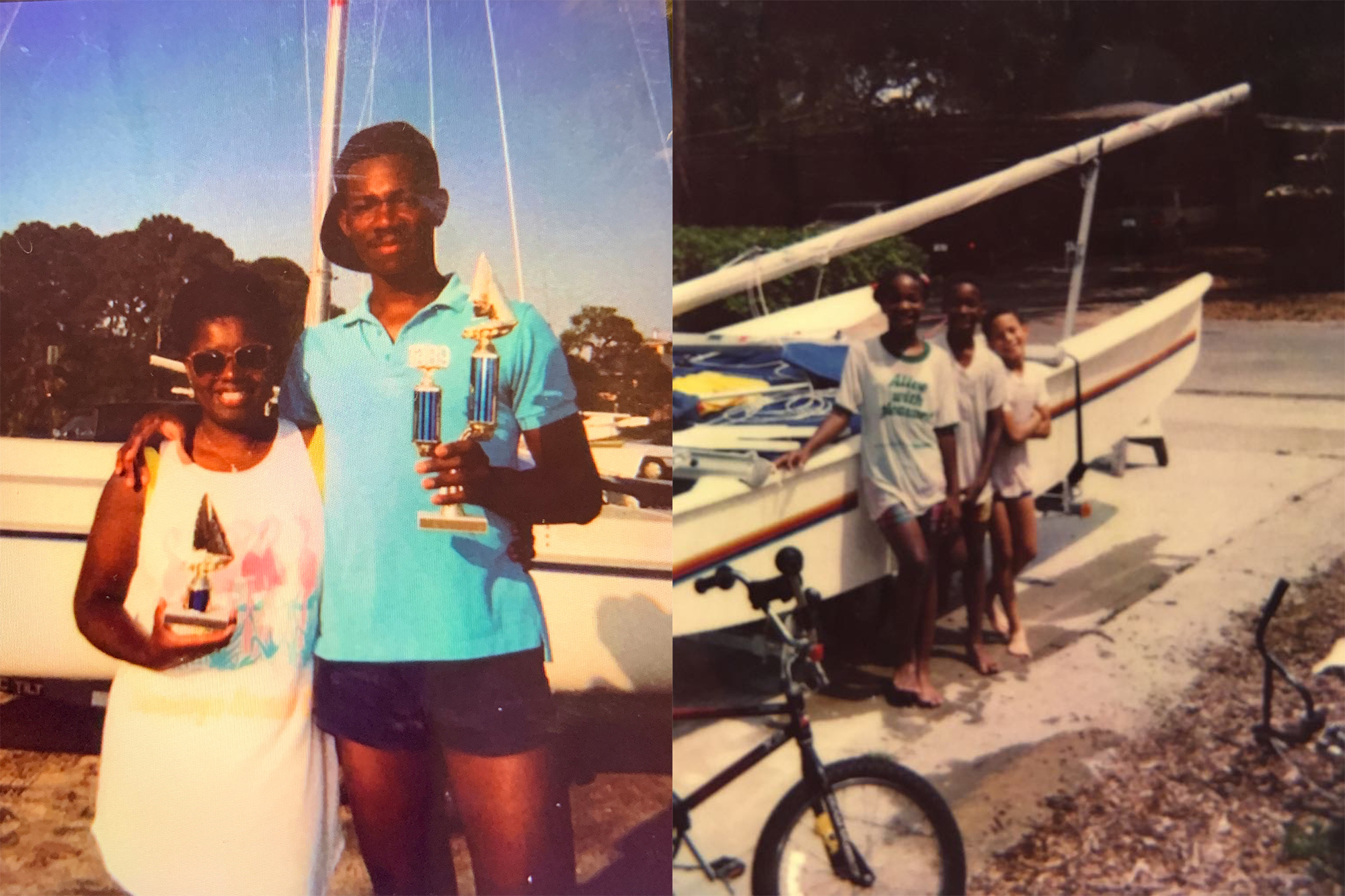 Gigi Lucas grew up on the water. Even before she could walk, Lucas knew when to tack and when to jibe. Her parents raced Hobie Cats off the Gulf Coast of Florida, and they reared their daughter on a heavy dose of saltwater and sand.

But despite knowing her way around winds, waves, tides, etc., Lucas didn’t take to surfing until she was in her early 30s.

“I grew up seeing people surf,” Lucas says. “But I never saw anyone doing it who looked like me.”

As a Black woman, Lucas recognizes that the barriers that kept her from picking up surfing are multiplex–a complex brew of culture, socioeconomics and access, stigma and stereotypes. But learn to surf she did. And, like any surfer who’s gotten “the bug” (see: every surfer, ever), surfing altered the trajectory of Lucas’ life.

Just months after taking her first surf lesson while attending a friend’s wedding in Costa Rica, Lucas packed up her life in New York City and relocated to Central America. While she tried mightily to attend to her career as a fashion industry consultant, surfing took precedence over all else. While Lucas acquired a smooth bottom turn, by the time her expat surf sojourn ended some years later, she’d left a marriage and a career behind.

Now, as a founder of Textured Waves and the Jacksonville, Florida-based nonprofit SurfearNEGRA, Lucas is trying to bring more gender- and cultural-diversity to surfing. With the help of a handful of local and national partnerships, SurfearNEGRA signs young girls of color up for weeks of surf camps, individual instruction, contests and ocean safety education. So far, over the course of two summers (one of which was severely disrupted by the coronavirus pandemic), 63 girls received instruction at different camps in nearly 50 U.S. cities through SurfearNEGRA.

We caught up with Lucas to learn more about her mission to get more girls of color in the water and how SurfearNEGRA can make the ocean a more inclusive space.

I want to hear about your parents racing catamarans. That sounds pretty cool.

I grew up in Tampa. And for as long as I can remember, my family had a boat. Before I was 7, I think, my dad was like, “You have to take a swim test. You have to be able to swim to be on the boat.” So boating was super important in my family. My parents started racing catamarans when I was 8. They were self-taught. They raced Hobie 16s. Every weekend. Their boat was called “Instigator” [laughs].

Mom, dad and “Instigator” on the left and Lucas and her siblings on the right.

And you were interested in surfing back then, right? But you never took it up?

I would see surfing, yes. I never saw anybody that looked like me doing it, though. But it stuck with me. It wasn’t until I was in my 20s, I made a goal to learn to play piano and learn to surf before I turned 40.

And you learned to surf in Costa Rica. That was pretty much it, right? You were hooked?

Yeah I was living in New York, working a corporate job. My old roommate was getting married in Costa Rica. We took a surf lesson. And I remember I had on those aqua shoes [laughs]. Nobody told me like, “Dude, don’t wear those.” But, truly, the first time I stood up I knew: this is it. This is all I want to do. The next day, the whole wedding party went ziplining and I went back for another surf lesson.

You were shirking responsibilities already!

Dude, I know [laughs]. It got bad real fast.

And then you moved to Costa full-time?

Yeah, within the next year. I worked 4 hours a day, but I surfed literally every day for 4 years. I called myself a “recovering Type-A.”

And how’d you come to found SurfearNEGRA?

So the idea for it really started when I was living in Tamarindo. You know, there’s a lot of Afro-Caribbean influence there, especially on the Caribbean side of Costa. And where I was living you’d certainly see people of color surfing. But we were like 3 hours from Atlanta–it’s closer to Costa than to California. And you never really saw African Americans coming to surf. I did some digging on social media and found basically, at that time, like a handful of prominent female surfers of color–one was Imani Wilmot. I just thought there needed to be a platform or a network for women surfers of color to just talk to each other, figure out where to go, etc. Eventually, I realized if I wanted things to change, it wasn’t going to be with women my age, it was the next generation. Making sure that young girls see representation of themselves, and then the biggest piece is access. It’s one thing to see what you’re capable of doing, but another thing to have the resources to get there. And that’s what really sparked SurfearNEGRA.

And the overarching goal is to get more young women of color into surfing, right? Tell me about some ways your organization is carrying out that mission.

So, what we’ve done is create a fund to literally send girls to camp in or near their own communities. We wanted it to be integrated–not like a Black surf camp, you know? But to really send them to a surf camp where they are going to meet other people who they can connect with in their community.

What are some of the more challenging aspects of getting Black girls involved in surfing?

What I’ve learned is that it can be very difficult to recruit girls on an individual basis to come to a surf camp. So, what we’ve done is partnered with organizations who already have that demographic. Then we partner with local surf camps around the beach. We give the girls a list of options of camps and dates and locations to see what can work for them. We get them registered and all paid up. The challenge has been that sometimes the girls end up going by themselves and that can feel a bit isolating. I had a 7 year old tell me, “I had fun, but it’d be nice to have a friend go with me next time. I knew I’d probably be the only one who looked like me in the surf camp, but I didn’t know I’d be the only one anywhere near the beach.”

Yeah, I mean, she was about it. She’s ride-or-die. She went back and kept surfing. 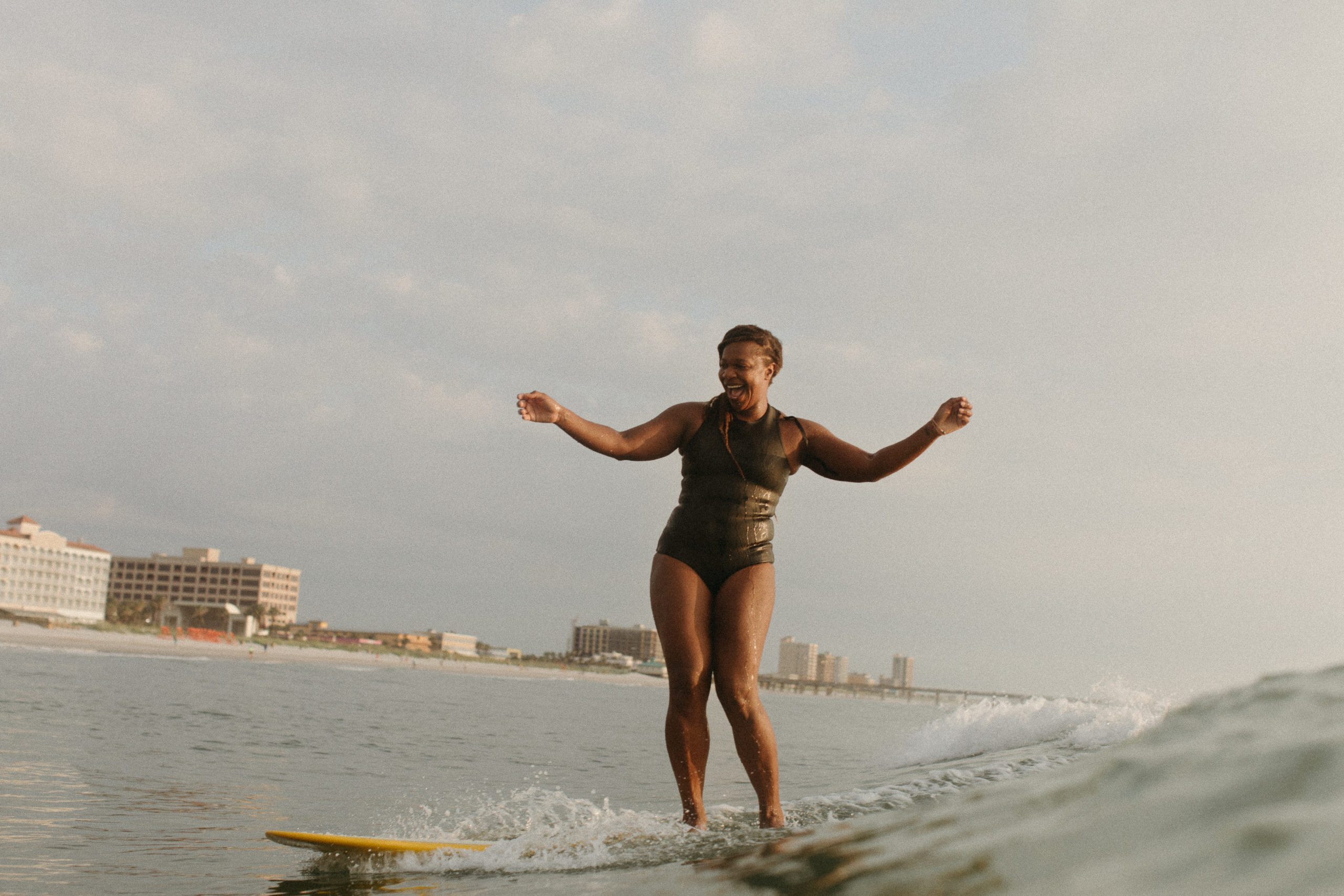 Lucas, still hooked and spreading the stoke to the next generation.

You also did some ocean safety training courses for the kids, right?

We partner with the American Red Cross Lifesaving Corps to bring groups of girls–past, present, future surf campers–to participate in a public safety course. They learn about riptides and currents and then get in the water so they can get more comfortable around the ocean. We really want them to eventually feel comfortable going out on their own and surfing. If you don’t grow up in a surf family or at the beach everyday, it’s hard to get that comfort level.

I imagine SURFER readers might vaguely understand where Jacksonville is, or that it’s in Florida. It’s the most populous city in the state. It’s 30 percent Black. It’s really spread out. It’s in the South and has its own history of racial issues and segregation. All of which creates its own issues around ocean access for people of color. Can you talk about how an organization like SurfearNEGRA is especially important in a city like Jacksonville?

I was somewhat embarrassed being an African American, born and raised in Florida, and not realizing how much Civil Rights history took place here and in Northeast Florida in general. I’ve learned a lot about the history of this area. Just north of here, in Amelia Island, there’s a place where slaves were bought and sold. Then, incredibly, years later, A.L. Lewis–the state’s first African American millionaire–founded American Beach, a kind of vacation spot for Black people in the segregated south. Just the history of that area speaks so much to Black people’s resiliency and our ability to reclaim our relationship to the ocean. I started SurfearNEGRA before I knew any of this. But learning it has proven to me how important this organization is for a community like this. I feel like it’s the next chapter in the story of Black culture and our presence here. It’s how we’re going to go forward. There’s a huge population of Black residents who have been disconnected from the ocean. The water is a meeting place–a place for equalizing. If we can somehow remove the barriers and the stigma around the ocean, that’ll bleed into other parts of life.

What’s the reaction from the community in Northeast Florida been like? Have you felt supported?

At first, I think people didn’t get it. But now, with everything going on–the Black Lives Matter movement and reckoning with racial justice–I’ve been feeling more and more supported. I will say that, the people who get it, get it. The people who don’t probably never will. And that’s OK. I had to come to terms with that. It might not be for everybody, but it means a lot to me.

That’s a bummer to feel like nothing can change anybody’s mind or attitudes anymore.

I still believe in change. I think actions can still change people’s attitudes. But it’s just the nature of our time. I have to put my head down and believe in myself and what I’m doing and stick with it. I mean, we’re in the South [laughs]. It is what it is.

It does seem like you’ve built a supportive network here. Not to mention some momentum and enthusiasm.

Yes, we definitely have. We’ve got a ton of girls surfing now. And they are so pumped on it. As we’re looking to the future, we’re trying to find ways to partner with after-school programs so that the girls can continue surfing during the school year when the summer is over. It’s the next step because these girls want it. Bad.