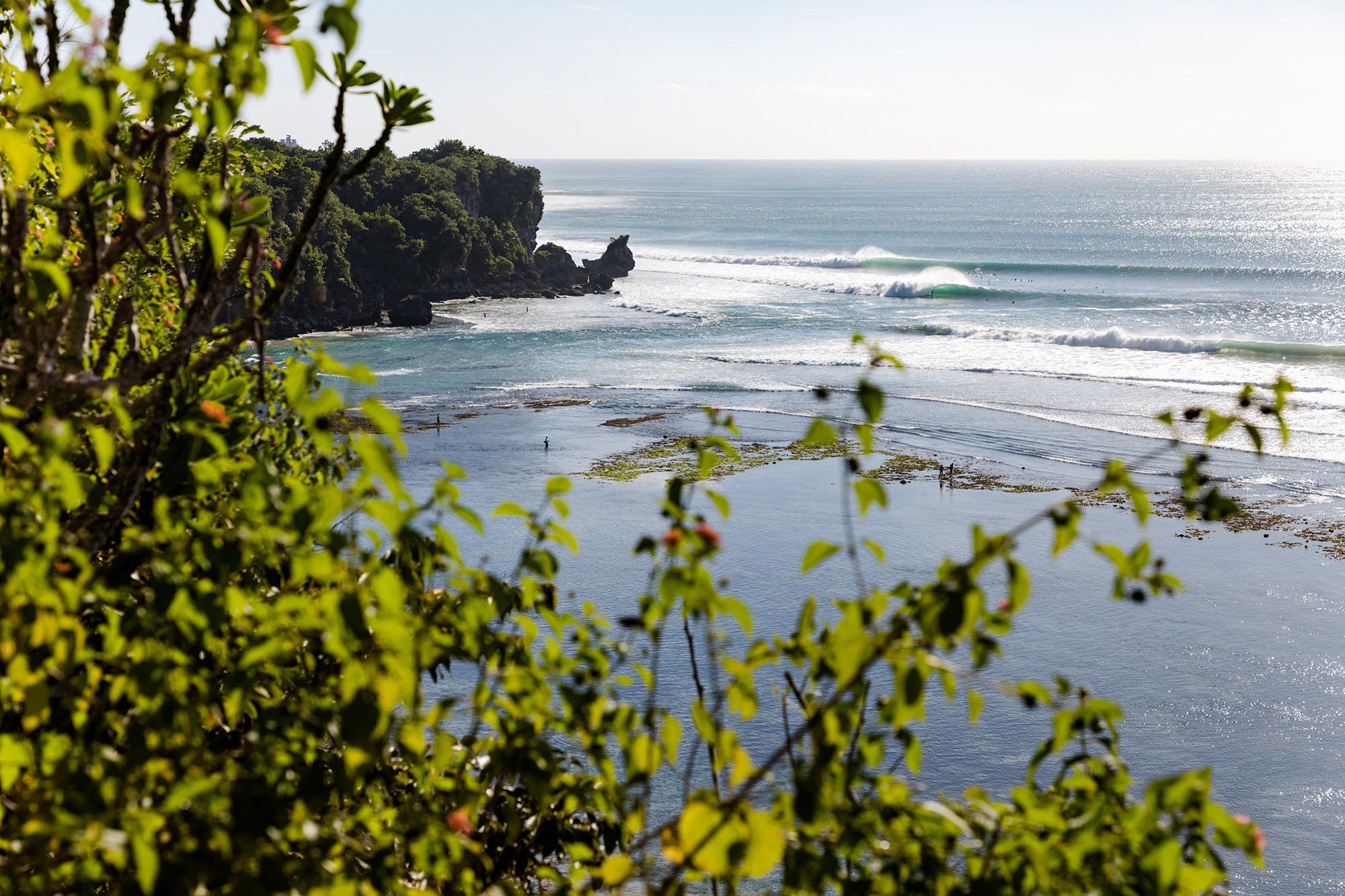 Authorities started to close beaches on the Bukit Peninsula in Bali this week, leaving lineups that are usually teeming with surfers from across the globe all but empty.

“There was one person out at Uluwatu on Tuesday,” said resident photographer Hamish Humphries. “It was head high and offshore. He must have snuck out somehow because they’ve closed Padang Padang, they’ve closed Uluwatu, and there’s probably more to follow.”

The lockdown on the Bukit beaches follows a recent spate of Coronavirus deaths on the island. The Indonesian government has since suspended the country’s one-month visa on arrival in an effort to curb the pandemic, effectively halting tourism across the archipelago.

“A lot of people have already packed up and left due to the uncertainty,” said Humphries. “The streets are pretty much empty. There was a helicopter flying over my house last night, using a loudspeaker to tell people to stay indoors. It’s eerie.”

Bali is not alone in the swift and immediate impact Coronavirus has had on lineups across the world, but the consequences are already devastating for an economy that’s almost solely reliant on foreigners who come to spend their dollars surfing or soaking up the sun.

According to Ross Taylor, president of the Indonesia Institute, a foreign policy think tank at Melbourne’s Monash University, as much as 85 percent of the Balinese economy is directly dependent on tourism. In January alone, 1.27 million tourists arrived at Bali’s Denpasar International airport.

“It’s really a case of all the eggs are in one basket,” said Taylor, who explained that Bali is particularly vulnerable because there is no social security system. Many people live day to day, earning an average monthly salary of a couple of hundred dollars. “There’s no real safety net,” he said, adding that if tourism disappears for an extended period of time, the knock-on effect will be catastrophic.

The outlook is already grim: over the past week, the number of tourist arrivals dropped more than 90 percent and is expected to grind to a halt entirely in the coming weeks.

“The locals are already taking a massive hit,” said Humphries. “Locally owned businesses are struggling. All the warungs on the beach at Uluwatu and Padang that feed the surfers and look after the surfers are empty. It’s sad to see.”

Elder statesman of Balinese surfing, Rizal Tandjung, says the pandemic is affecting businesses across the board. Homestays and resorts have emptied out, while the normally bustling neighborhood of Kuta, which boasts one of the highest concentrations of surf stores in the world, has become a virtual ghost town. “Everyone is hurting,” said Tandjung. “I hope we can get through this soon and the surfers will come back to Bali.”

The Indonesian government’s recent efforts to ramp up measures to curb the spread of the virus may be too little too late, however. “Sadly, Indonesia was very slow off the mark to respond to COVID-19,” said Taylor. As of 27 March, the World Health Organization reported Indonesia had 1046 confirmed cases, and 87 deaths. Taylor fears the figures grossly underrepresent the real infection rate.

“Because of this slow response, they’re now saying the whole nation, including Bali, could be the Italy of South-East Asia,” he said. “It’s very hard to see a rebound from this for at least the next six months.”

Meanwhile, business in the Mentawai Islands, home to a multi-million-dollar surf tourism industry based on resorts, charter boats and homestays, has also come to a standstill.

“All of the resorts are closed and none of the charter boats are running,” said Paul Clark, owner of Pitstop Hill resort on Nyang Nyang Island. “The only foreigners left in the region are a handful of camp owners or managers and their families.”

The head of the Mentawai government, the Bupati, recently issued instructions that no passenger vessels are permitted to depart for Mentawai from any of Padang’s major ports and that all tourist attractions – including surfing locations – are closed until April 5th. Any foreigners remaining in the islands are not allowed to move around for anything other than urgent purposes which, said Clark, specifically excludes surfing.

“You could still probably get around by chartering local boats, because no doubt the local guys would be keen for the income regardless of the (government’s) instructions,” said Clark. “And for sure, surfers are thinking if they can just get out there, they’ll enjoy the best waves in the world with no-one around, and I get that. But there is a bigger picture to consider now. In the west, we are focussing on ‘flattening the curve’ in the hope that our incredible medical systems are not overwhelmed by a spike in cases. In the islands like Mentawai, there is hardly a medical system there to be overwhelmed and we need to consider the local communities – a surfer bringing the virus into those isolated communities could rapidly turn into a really bad scenario for the local families.”

Clark said the immediate priority is to make sure guests can postpone until next year without any charge, while still looking after his staff.

“Like everyone else, we can’t predict how long this will last but it’s definitely going to be three to six months without income,” said Clark. “We’ve got the local staff on a roster where they are basically two weeks on, two weeks off, so that there is still money flowing directly to their families, and so that we can stay on top of the upkeep of the resort…We’re trying to find a balance between keeping things ticking along in terms of our staff and the other businesses that rely on us, with the fact that we basically have no revenue coming in for a long time.”

Further afield, business owners have been bracing themselves to weather the same storm.

“Surfing has been banned in Portugal and all the beaches are closed,” said Jelle Rigole, co-owner of Casa Paço D`Ilhas surf lodge and surf school in Ericeira. “Like much of Europe, we are in a lockdown imposed by the government. The virus is not so dramatically spread here yet like in Spain or Italy, but the authorities are expecting the worst.”

Ericeira’s dense concentration of quality surf spots have long made it a choice European escape, especially in Spring when conditions are ideal, but the past weeks have seen beaches left empty and guest houses shuttered – a scenario that is playing out across Europe. 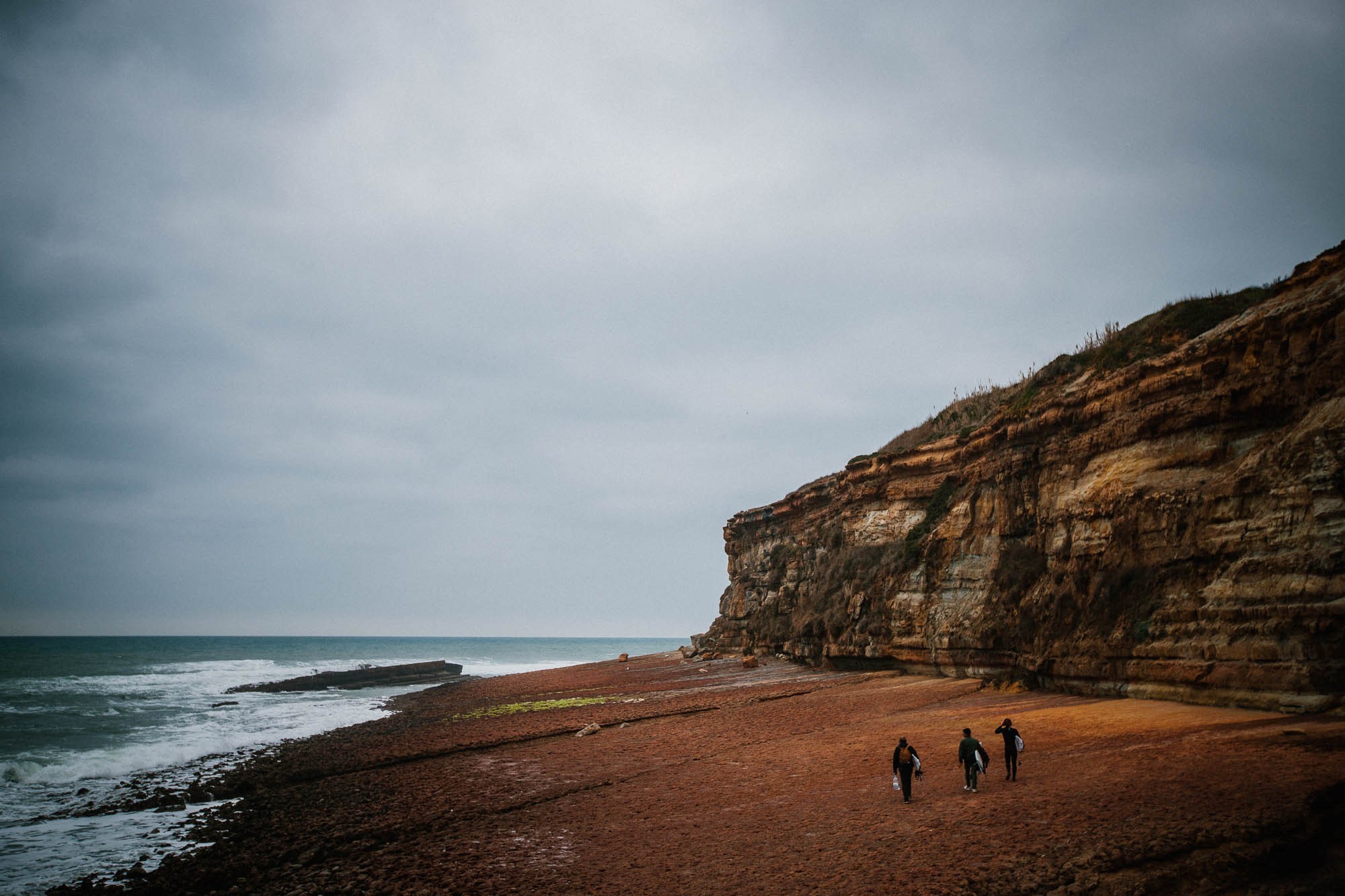 Ericeira, before the lockdown.

“We were planning on opening mid-March and we were pretty much fully booked,” said Rigole, who had sunk all his savings into renovations in the off-season. “But we never even opened. A couple of weeks before the government even imposed the lockdown we decided to keep the hotel closed, to try to set an example and not expose our staff and guests to unnecessary risks.”

Instead, Rigole said they have had to take out an emergency loan and are renting out their separate self-catering units long term at rock bottom prices for people who are stuck and need to self-isolate.

“We have set up a big vegetable garden and keep chickens now to keep our food costs as low as possible. With the small rental fee we get from our guests we can keep paying our staff and the main bills of the house. We had a couple of sneaky sessions before all the beaches were closed, but everyone’s respecting the lockdown. There are more important things now than surfing.”

Further south in Morocco, the usually bustling surf hub of Tagazhout has emptied out almost entirely. “We’ve been on strict lockdown for the last week,” said Ben O’Hara of Surf Maroc. “Morocco has been pretty quick off the blocks on this if you take into account the number of infections compared to other countries. Fines and three months in prison are the risks for not complying. It’s pretty serious.”

Despite this, O’Hara said a few locals who live right on Anchor Point had been surfing, “but then today a few more people went by car and the cops shut it down”.

“Our business is shut down for now and all our staff on leave,” continued O’Hara. “There are so many factors and variables making it hard to predict what the future may look like. Tourism and air travel will have some rocky times ahead…but I am confident that we will bounce back.”

The Maldives, whose economy is powered by high-end resort tourism, has also announced a suspension of visas on arrival for tourists of all nationalities as of Friday 27 March.

While the impact of Coronavirus here was still low, with only 13 confirmed cases at the time of writing and zero deaths, the island nation is taking no chances.

“Travel from and to resorts from all inhabited islands is suspended. All excursion activities from all islands, resorts, safaris and guesthouses are now banned across the country until further notice,” said a statement issued by the Foreign and Commonwealth Office.

Over in the Caribbean, a ban on surfing is been strictly enforced in countries like Panama. “Apparently a few surfers got arrested the other day for refusing to get out of the water,” said Scott Balogh, owner of Red Frog Bungalows in Bocas del Toro. “All land, air and sea travel has been shut down indefinitely and we are under a 24-hour lockdown. There are specific times you can go out and get groceries, depending on the last number of your identification card.”

Balogh said they are heading into their traditional low season and are better placed to weather the storm because his resort is largely self-sustaining. But he fears for other operators.

“We lost about three weeks of business but we were lucky to have a good season (before that). I fear for all of those who work on the Pacific side of Central America. Mexico, El Salvador, Nicaragua, Costa Rica and Panama are only coming into their high season now. The effect of this will be crushing.”

Sean Murphy, director of WaterWays Surf Adventures, said the impact the pandemic is having on surf travel operators across the globe is unprecedented. “The world is in complete shutdown and with various restrictions, warnings and closures, you really cannot get anywhere,” said Murphy. “Mexico is about the only place you can go as of today.”

Adding to the financial stress, operators have largely been left on their own to compensate clients due to force majeure — a legal proviso defined as ‘unforeseeable circumstances that prevent someone from fulfilling a contract’. This effectively means the insurance industry is exempt from paying out.

“Most properties and resorts are giving travel credits for future travel as travel insurance is not providing coverage,” explained Murphy. “Our staff is working major hours to take care of passengers and manage credits and rescheduling as best possible, but nobody has a real eye on a timeline or how long this will last. There is no clear answer.”