Great Whites Are Disappearing in Cape Town, the Former Shark Capital of the World 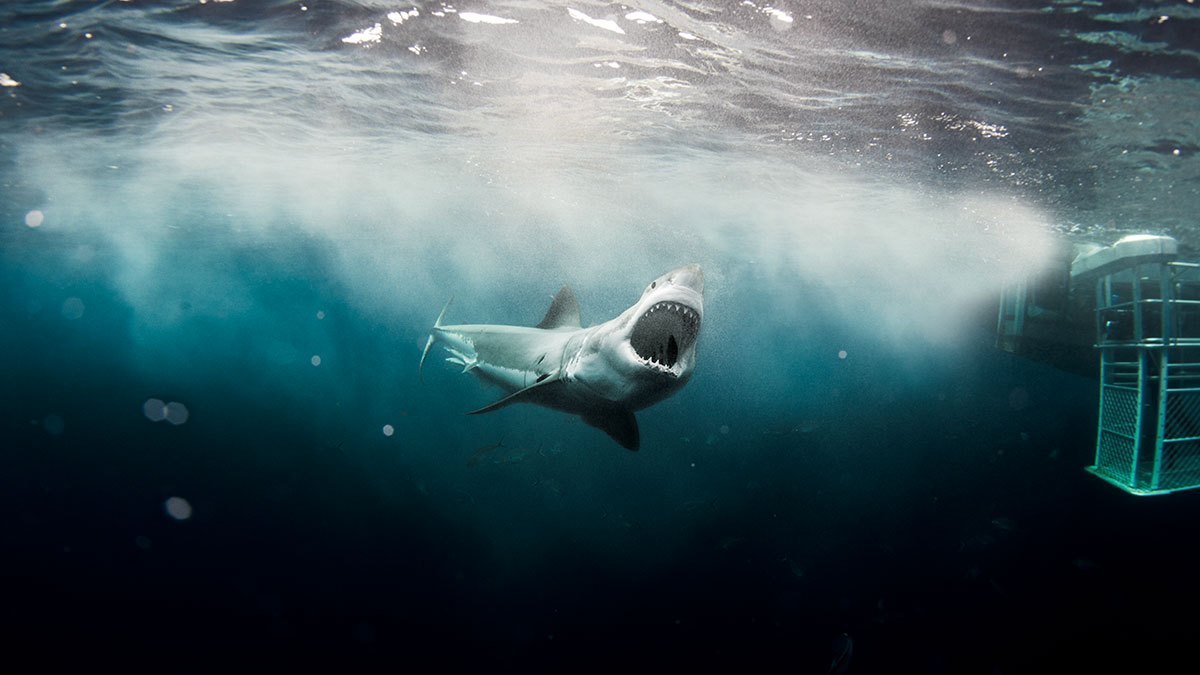 The Cape Peninsula dangles off the bottom of Africa like a rough fishhook, curling round from the frigid waters of the Atlantic Coast into the broad expanse of False Bay.

This island-like geography has created a plethora of waves, from spitting beach breaks and big-wave reefs to the beginners’ paradise of Muizenberg. Despite the abundance of setups, the peninsula is far more famous for its other marine attractions.

Since the early 2000s, False Bay has become a world-renowned location for cage diving with great white sharks or to witness the spectacular breaching phenomenon – where these sharks launch themselves into the air while hunting seals. Less spectacular is encountering one of these leviathans while surfing, which also became a far more common occurrence at the turn of the millennium.

Between 2010 and 2016, there were 205 great white shark sightings on average per year recorded by the Shark Spotters, an organization set up specifically to monitor shark activity around the peninsula. Various scientific studies estimated there were, more accurately, between 300-to-500 great white sharks inside the bay, making it home to one of the densest concentrations of white sharks in the world.

As a surfer who’d grown up in these waters, I couldn’t help but feel slightly unsettled by statistics like this while investigating a story about Cape Town’s shark phenomenon in 2015. But I also took solace in the fact that it was surely an indication of a healthy ecosystem. Great whites have been protected in South African waters since 1991, and False Bay was teeming with life — not just great whites, but an abundance of other shark, fish and marine species.

This photo was taken along the southern coast of Australia, but the great white sharks that are now declining in numbers in Cape Town likely look just as scary.

Then in 2017, the number of great white sightings recorded by the Shark Spotters plummeted to 57. In 2018, this figure dropped further to just 50. By 2019, there were zero recorded sightings, mirrored by a complete absence of white sharks in cage diving encounters. In the space of three years, Cape Town’s apex predators had literally disappeared.

“What we have seen in just the past few years has been nothing short of a calamitous crash of our great white shark population along the south and southwest Cape coastline,” says Chris Fallows, a world-renowned cage diving operator and wildlife photographer based in False Bay.

While the thought of fewer white sharks might make local surfers’ toes curl less in the lineup, the ecological implications could be dire. It’s well known that sharks play a vital role in maintaining a balance in the ocean ecosystem and their disappearance, says Fallows, may have catastrophic results.

It was initially speculated that the culprits could be a pair of orcas nicknamed Port and Starboard, who were first spotted in False Bay in early 2015. Orcas are the only species known to predate on great whites and other large sharks. They often hunt in pairs, attacking the pectoral fins and ripping the shark open to eat its liver, which is rich in fat.

Dr. Alison Kock, a leading shark scientist and marine biologist, theorized that a new sub-group of killer whale that specifically targets sharks could have moved closer to shore as their offshore food sources declined, changing the structure of the False Bay food chain. As these new apex predators appeared more frequently in the bay, the great whites had fled.

Fallows, however, is skeptical that killer whales are solely to blame.

“During all encounters with orcas in False Bay and around Seal Island, we never noticed a drop off in sightings of great whites,” he says, citing extensive sets of data that tracks the presence of orcas in False Bay since 2009. “I am not saying that orca predation does not or has not had an effect on white shark residency… (but) these effects are short to medium term, as mirrored in other locations around the world where orca predation on great whites has actually been witnessed.”

Rather, Fallows believes it is the disappearance of smaller sharks that has had a ripple effect all the way up the food chain.

Specifically, smooth-hound sharks and soupfin sharks, which congregate in dense shoals and were historically abundant in False Bay. 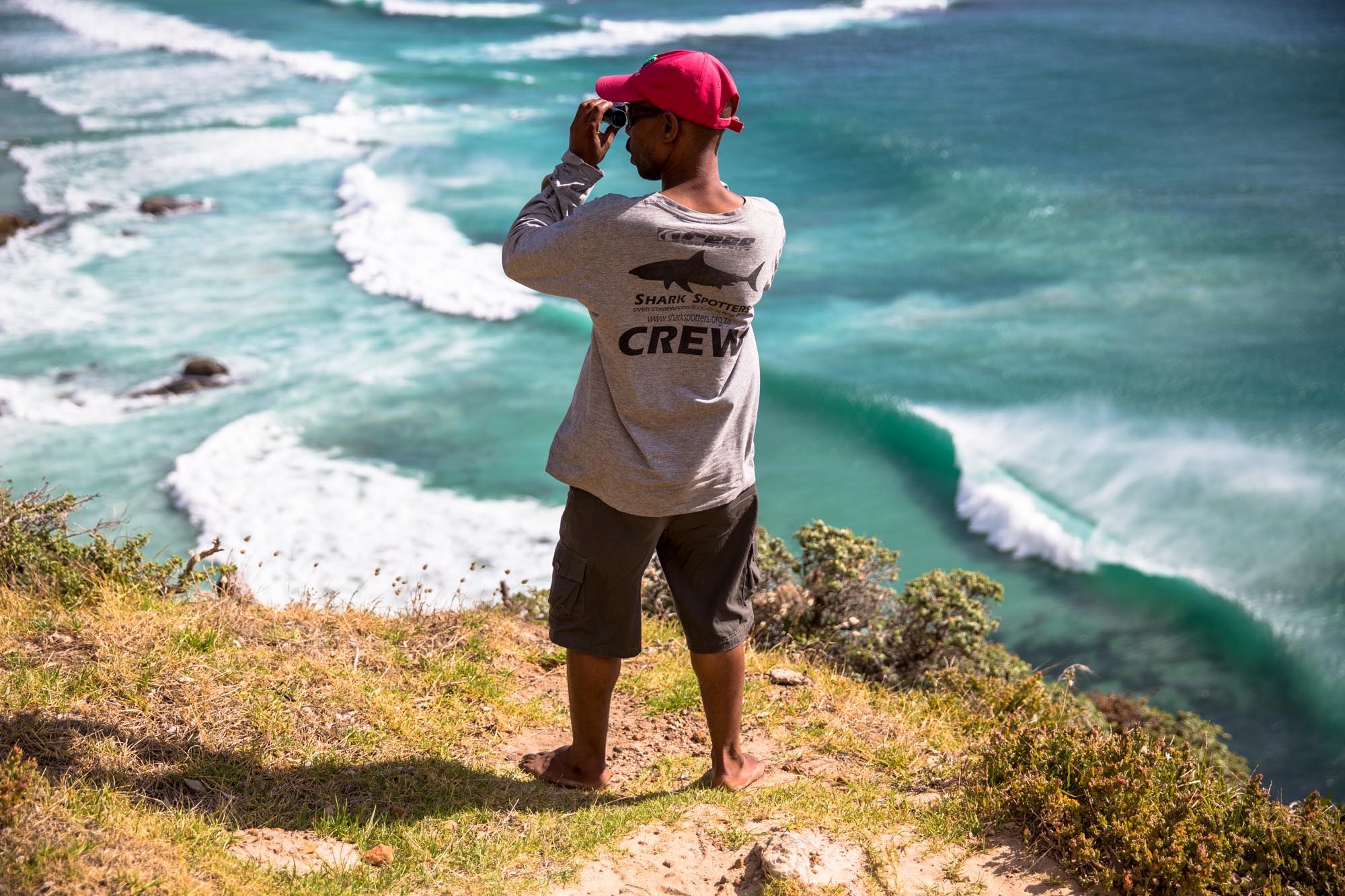 A Shark Spotter in Cape Town, scanning the lineup for men in grey suits

According to Fallows, it’s a common misconception that South African great whites feed mainly on seals. Rather, smaller shark species and bony fish are their primary food source, making up 60 percent of their diet. These sharks were fished intermittently around False Bay at first, mostly to supplement other catches, until 2015.

“Suddenly, three demersal shark longline permit holders really started fishing the resource hard,” says Fallows. “They learned how, where and when to target the smooth-hound and soupfin sharks. Their catches soared as can be seen by the export data to Australia, where the sharks are sold for fish and chips. For the great white, this has been nothing short of a death blow.”

Often referred to as “flake” in Australia, smooth-hound shark is commonly used in Australian fish and chips. Many consumers don’t even know they’re eating shark — according to Australian seafood labeling laws, only fresh and frozen fish needs to be identified. Once it is cooked, there is no legal obligation to name the species and shark is called everything from “flake” to “pearled fillet”, “boneless fillet” and even “monkfish”.

Australia has its own smooth-hound shark fishing industry but it is sustainably managed with strict quotas and enforcement. In order to meet the huge excess demand for fish and chips, importers simply started bringing in shark from South Africa, where the fishery is poorly managed with little regulation.

“For Australia, it is a double win,” says Fallows. “They are protecting their resource from overfishing by having well researched and well-enforced quotas. To make up the demand deficit, they import our sharks at a favorable exchange rate. The damage being done on the other side of the ocean is unknown to most people in Australia, who are unwittingly eating our sharks in their fish and chips.”

Unlike in Australia, there is no limit on the total allowable catch in South Africa. Since 2011, the Department of Environment, Forestry and Fisheries’ (DEFF) own scientists have stated that these sharks are being harvested at an unsustainable rate — almost three times the annual recommended quota — and have made urgent recommendations to limit the total allowable catch, but this has been repeatedly ignored by management and policy makers. To make matters worse, shark longliners have been documented fishing inside South Africa’s flagship marine reserves — the equivalent of longline fishing on the Great Barrier Reef. In 2019, DEFF scientists warned that smooth-hound and soupfin shark populations were in a state of collapse.

Repeated attempts to get a comment from the Department went unanswered, but the science also echoes anecdotal evidence I had heard while talking to local surfer Pierre de Villiers back in 2015.

De Villiers is not a scientist. His credentials have been earned through decades of surfing and diving the Cape reefs. Along with Peter Button, he pioneered Dungeons long before there were boats with photographers that dropped you in the lineup. Back then your only option was to lug your rhino chaser around the towering Sentinel mountain and make the 200-meter paddle out through Shark Alley, a deep channel flanked on either side by a rocky seal colony where it was jokingly said that white sharks would hang out like customers at a drive-through.

A champion spearfisherman, De Villiers told me how, up until the early 2000s, the peninsula was teeming with smooth-hound sharks.

“They used to come around Cape Point and into the bay in numbers that were mindboggling. You’d swim over and you’d see a mass of grey things underneath you. They look … scary until you realize they can’t bite you. But there were millions of them. Guys used to get more money for them than yellowtail… So they fished those sharks until they disappeared.”

Historical and current data bears out De Villiers’ long-held observations. Between 2014 and 2018, the total amount of shark products exported from South Africa to Australia rocketed from around 8,000 kilograms per year to nearly 60,000 kilograms according to TRAFFIC, the wildlife trade monitoring network. The number of smooth-hound sharks killed by demersal longline fishing in 2018 alone was a staggering 30,112 — all exported to Australia.

Fallows, and other experts in South Africa and Australia, are now focusing their efforts on raising awareness around the issue and trying to educate end consumers about the devastating impact the fishery is having through a campaign called Shark Free Chips – before it’s too late.

“It’s not surprising that the great whites have gone and will continue to disappear further up the coast as their primary food source is fished to nothing,” says Fallows. “In just four short years we have seen massive ecological changes that may never be able to be rectified, sadly all for fish and chips.”