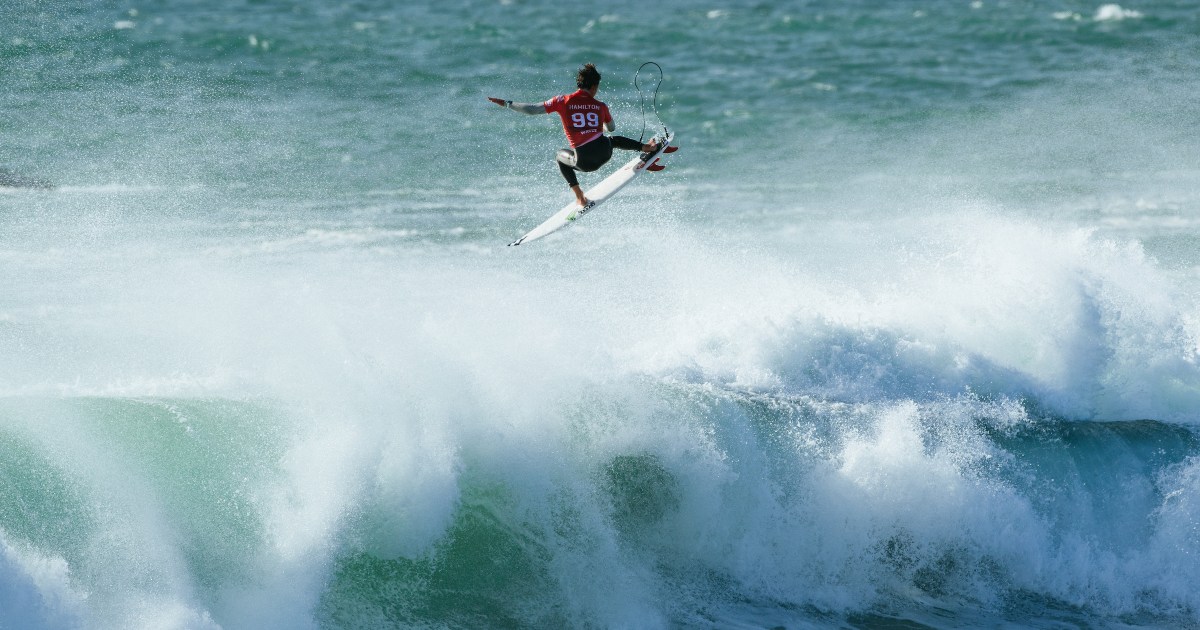 Events going down on the other side of the world can be hard to keep track of–events like the ongoing 2022 MEO Pro Portugal. Thankfully, tech has allowed us to stay up-to-date with the necessary highlights. Days 1 and 2 at Supertubos were packed with, well, tubos. Conditions were challenging at times, but the best of the best found scorable visions and evaded elimination. To rewatch everything that happened during Day 2, rewatch above and continue reading for a detailed analysis from the WSL:

An early start completed two heats before the event went on hold through the lowest part of the tide before re-starting on the incoming tide. Conditions cleaned up and offered more makeable rides in the afternoon as the remaining men’s Opening Round and Elimination Round heats were completed.

Florence Finds Excellence in Unruly Lineup
Two-time WSL Champion John John Florence (HAW) once again proved he’s one of the best barrel riders on the planet with an unmatched ocean knowledge as he found the deepest sections and made exiting them look easy while most surfers were on survival mode at Supertubos. The Hawaiian dropped late right under the lip of a right to lock into the tube and post the first excellent score of the day, a 9.07 (out of a possible 10). He backed it up with a backhand barrel in the last moments of the heat to advance in first with an incredible 17.57 heat total (out of a possible 20).

For International Women’s Day, the past event winner in Peniche decided to surf with his mother’s name, Alex Florence, on his jersey, paying respect to both the mom and surfer that brought him into the world and gave him opportunities to become who he is.

“I’m so happy that we waited, because even during our heat the waves were just getting better,” Florence said. “The wind is still super hard, it feels like you’re airdropping all the time, but it’s a lot of fun. It’s amazing to honor my mom and have her name on my back. I wouldn’t be where I am without her. She still inspires me and my brothers, she still surfs Pipe everyday, and I couldn’t be more thankful to her.”

Slater Puts On a Show, Avoids Early Elimination in Portugal
The 11-time World Champion who claimed his 56th career-win at Pipeline to start the year, had a shocker at Sunset and today found himself in danger of another disappointment in the Elimination Round. But Kelly Slater (USA) found his magic in the shifting big barrels at Supertubos as he paddled into a great tube on his backhand in the opening minute of his heat. He later pulled into a shorter right to back up his main score and advance in first into the Round of 32.

Slater took the opportunity to once again praise the four-time World Champion Lisa Andersen (USA) for her influence on his own career.

“Lisa and I, we really went through our heyday together, the early days riding for Quiksilver, going to contests, on trips and winning world titles,” Slater said. “We just have a really parallel life so ‘Lisa, I still love you and I hope you enjoyed Courtney (Conlogue) and I wearing your name on our jerseys’.’”

World’s Best Score Major Shade Time in Portuguese Tubes
The likes of Ethan Ewing (AUS), current World No. 1 Barron Mamiya (HAW), Joao Chianca (BRA), and Jack Robinson (AUS) threaded barrels both on the rights and lefts of Supertubos all afternoon, giving fans on the beach an exciting show as waves kept breaking closer and closer to the shore.

“It’s always good to get that first heat out of the way,” Chianca said. “I was really psyched with the draw, with Jack (Robinson) and Leo (Fioravanti), they’re both so good in those conditions and I knew it was probably going to be a good heat. I feel super comfortable here and really enjoy myself.”

A rookie on tour, Chianca chose to honor his compatriot Silvana Lima (BRA) for International Women’s Day, who paved the way for a lot of Brazilian surfers currently on tour or coming up through the ranks.

“Silvana (Lima) has represented Brazil so well and for so long on tour, and alone for a while,” Chianca added. “She always treated me and others with kindness and respect, she’s just a great ambassador and role model for us.”

CT veteran Kolohe Andino (USA) didn’t find his mark right away and was sent to the Elimination Round, but he turned the tide with a masterful performance late this afternoon. The Californian found deep barrels to advance in first and keep his Portugal campaign going. Another surfer to pick his inspiration close to home, Andino opted to honor five-time WSL Champion Carissa Moore (HAW) for International Women’s Day.

“I got pretty lucky in that heat, it seemed like everything I did was the right decision,” Andino explained. “I think Carissa (Moore) is the best role model the sport’s ever had and I’ve told her that before. She’s my hero, she’s the best. She’s a class act, always, and obviously her world titles and the Olympic Gold Medal speak for themselves.”

Event wildcards Afonso Antunes (PRT) and Vasco Ribeiro (PRT), along with Matthew McGillivray (ZAF) and Deivid Silva (BRA) couldn’t find some of the best scoring opportunities other surfers were on and bowed out in the Elimination Round, placing equal 33rd.

With the wind easing and similar swell size expected tomorrow, event officials will reconvene at 7:20 a.m GMT on Saturday, March 5, 2022 for the next call.