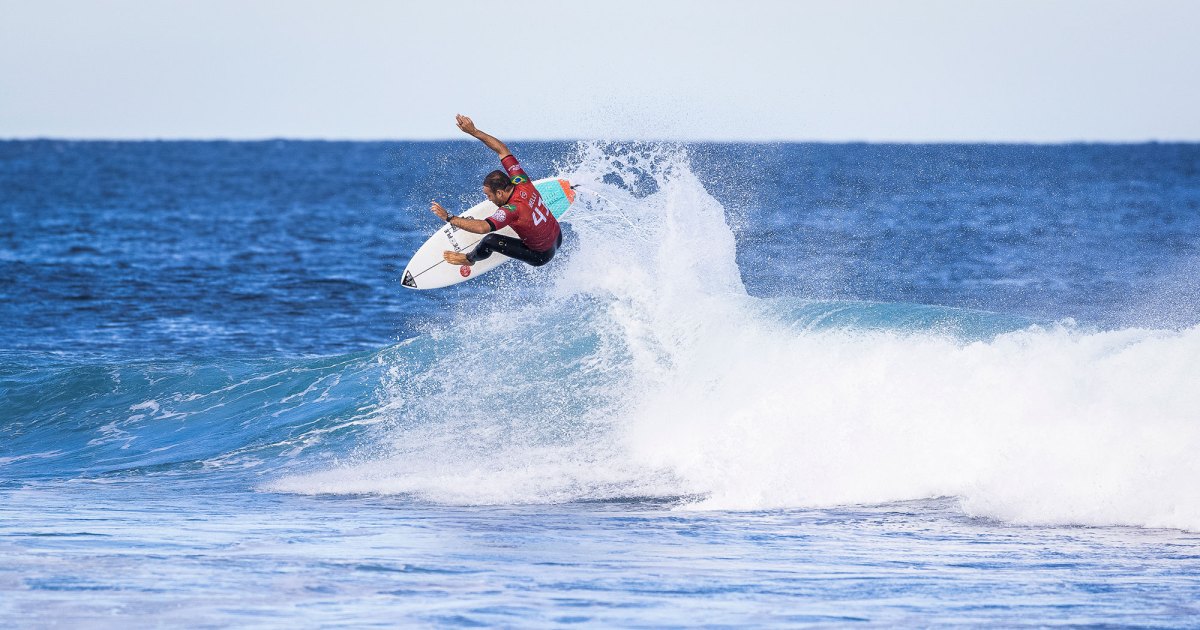 The ‘CT is now in the middle of its fifth event of the 2020/2021 season–and it’s at a brand-new venue. Strickland Bay-a peaky reef break located on the western side of Rottnest Island–has played host to the world’s top surfers over the past few days and has delivered a few exciting rides (and of course, a few upsets). Michel Bourez claimed the wave of the event so far. Gabriel Medina boosted. And after a triumphant win at Margaret River, Tatiana Weston-Webb bowed out early in the first elimination round. Hit play above to catch some of the event’s highlights or keep reading for the WSL’s breakdown of Day 2 of the Rip Curl Rottnest Search:

The Rip Curl Rottnest Search presented by Corona, the fifth stop on the 2021 World Surf League (WSL) Championship Tour (CT) and the final event of the Australian leg, eliminated the first competitors from the draw today in the clean-but-slow, two-to-three foot waves at Strickland Bay. The women’s and men’s Elimination Round 2 saw the first six competitors exit, and the competition is now set for the men’s Round of 32 and women’s Round of 16.

Due to the dropping swell and onshore winds forecast, event organizers have called the competition OFF for tomorrow, Tuesday, May 18, and will reconvene on Wednesday, May 19, to reassess the conditions and make the next call.

Tatiana Weston-Webb (BRA) came into this event as the current World No. 2 after winning the Boost Mobile Margaret River Pro. After a tough loss in yesterday’s opening round, Weston-Webb was relegated to the first Elimination round of the day against Nikki Van Dijk (AUS) and event wildcard Mia McCarthy (AUS). In the slow conditions, Weston-Webb was unable to find the scores to advance past Van Dijk and McCarthy, and was eliminated in equal 17th place.

“It is really slow out there this morning; I think the ocean needs a coffee,” Van Dijk said. “I’m really stoked to make it through that heat though. Yesterday I feel like I came a little bit unstuck and couldn’t finish my last turns, so I’m glad to have made it out of the Elimination Round, it’s sketchy that round. I love surfing my backhand and I feel like our opportunities to go left are few and far between, so I really want to capitalize at this event. It’s all good though, I’m back in the event and I’m looking forward to some more heats.”

Brisa Hennessy (CRI) was eliminated in the second heat of the Elimination Round, unable to overcome Australians Isabella Nichols and Bronte Macaulay. Hennessy has had a difficult run so far in the 2021 season with four consecutive 9th place finishes and a 17th place result today. Hennessy will look to improve her results on the CT’s final stretch, next heading to the Surf Ranch in Lemoore, Calif.

Taj Burrow (AUS), who returned to this competition as an injury replacement, was dispatched by Griffin Colapinto (USA) and Jack Freestone (AUS). Burrow, the 18-year CT veteran, showed he hasn’t lost any of the flair that earned him the tag of the most exciting surfer of his generation, but unfortunately fell victim to the slow conditions on Day 2 at Strickland, only finding one set wave in the 35-minute encounter.

“That didn’t really feel like a normal heat,” Colapinto said. “There wasn’t that usual pressure. Taj and I were talking about what boards we’re on and what’s going on in his life, so it just felt like a normal free surf. I was a little nervous because Jack and Taj are such high-performance surfers in waves like this, so anything could have happened. I decided to go sit on the left and, sure enough, that set came, so I’m glad it paid off.”

15-year CT veteran Jeremy Flores (FRA) also fell short of advancing at Strickland Bay with a loss to rookie Matthew McGillivray (ZAF) and injury replacement Liam O’Brien (AUS) in Heat 2 of Elimination Round 2. In a heat where the wildcard held the lead for its entirety, the result was decided on the final siren with McGillivray and O’Brien splitting the peak on a set and the South African gaining the lead on the right while O’Brien went left to hold Flores from the opportunity to find a score.

“It was a nerve-wracking heat,” said McGillivray. “I got given a gift at the end there. It is tricky conditions and with it being so slow, you have to be patient. In previous heats, I haven’t been patient enough so I was focused on making better decisions in that heat. It wasn’t going my way until I got that right at the end and had an opportunity with Liam taking the left, so I’m grateful for that. I’ve had a few elimination round heats now and it doesn’t get any better. It’s a tricky round. I came into this event feeling a lot more relaxed with a bit of confidence from my result in Margaret River. I felt more sure of myself, but I still have more work to do.”

Other competitors through to the men’s Round of 32 included Caio Ibelli (BRA) and injury replacement Stu Kennedy (AUS), who got the better of Peterson Crisanto (BRA) at Strickland Bay. Rip Curl wildcard Jacob Willcox (AUS) was a standout in his heat win over Morgan Cibilic (AUS) and Jadson Andre (BRA), with Andre being eliminated in equal 33rd place.