How a Wildcard Came to Dominate a ‘CT Event 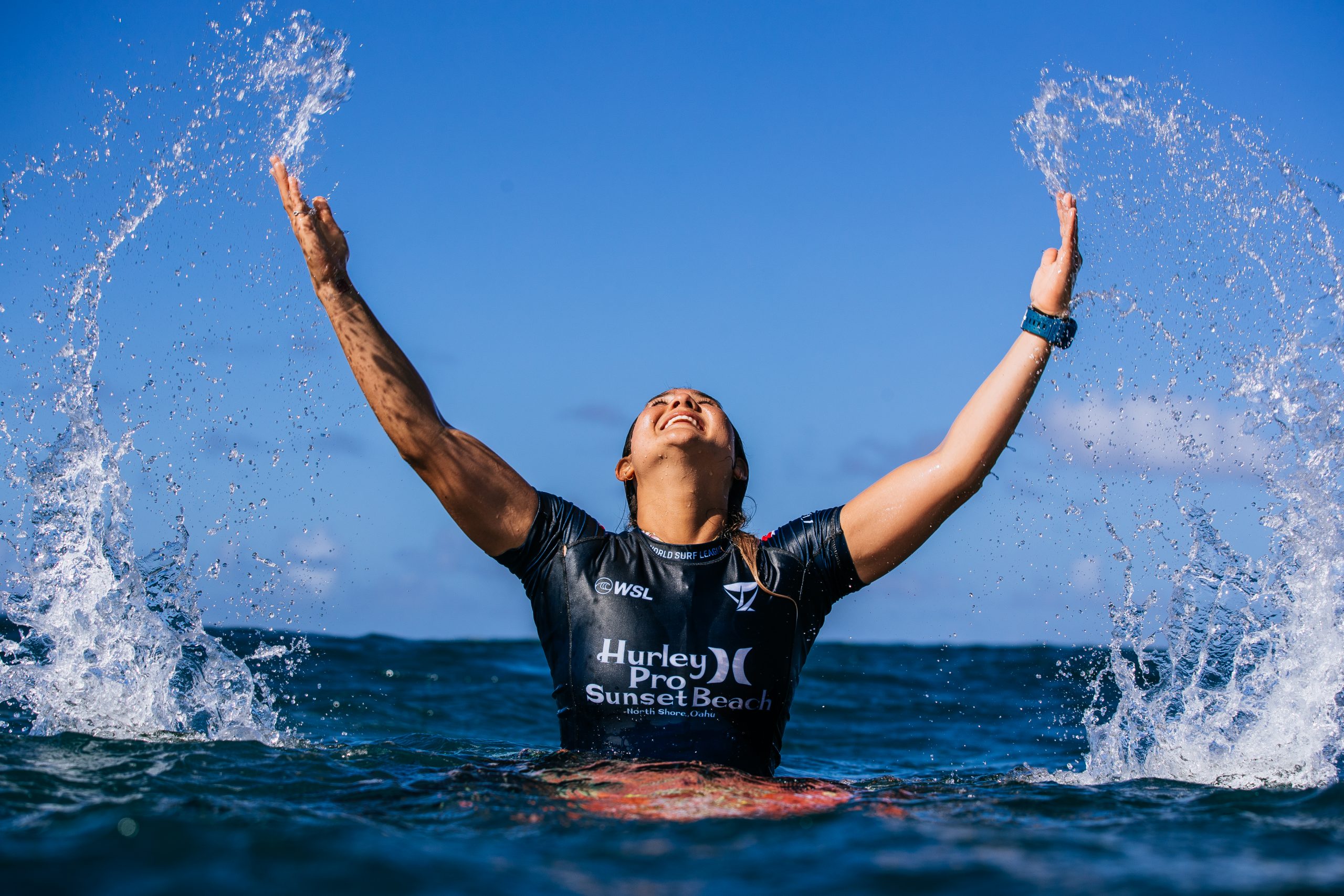 Last Friday, North Shore powerhouse Barron Mamiya became the first male wildcard to win a ‘CT event since 2008. If you watched the event, you know he did so by relying on local knowledge and taking down big names heat by heat. His epic (and emotional) win catapulted him to the top of the Jeep Leaderboard ranking and earned him the yellow jersey. Brisa Hennessy–repping Costa Rica–also secured that gold jersey, becoming the first surfer from the Central American wave-magnet to win a ‘CT event (read all about it from the WSL below).

To watch a recap of finals day, hit play above and make sure to set your Fantasy Surfer team for Portugal here.

A Final with hefty implications unfolded as Hennesy and local charger Manuel battled to see who would take the No. 1 spot on the World Rankings. Hennessy started off her first-ever CT Final with an early lead but Manuel’s opening 6.33 put her right back in the heat and quick in-and-out to take the lead before making a priority error halfway through the affair.

Hennessy’s 5.23 put her back into the lead and required a 4.73 of Manuel heading into the final six minutes as the Kauian went for it all on a major maneuver and fell from the top to the bottom. The Costa Rica representative found one last opportunity and turned in a 7.00 to secure her a massive victory, the country’s first on the CT.

“I’ve just dreamed about this moment and never thought it was possible,” said Hennessy. “It was an honor to surf against Malia. I feel like she has such an amazing connection out here and just all the people in my life, thank you. This is the reason I was able to do this today.”

“You definitely reflect and think about all those moments that brought you here and made you who you are,” added Hennessy. “I barely made it back into the CT. I had to go to the Challenger Series and that was an emotional rollercoaster. I think it’s the people that are behind you and in your village that make you who you are and really are your light. My family, my friends, my mom and dad, my grandparents, Glen Hall who was with me since the beginning in my rookie year and has seen me grow and has seen me at my lowest. Costa Rica’s given me so much, it’s literally given me the gift of surfing. The gift of the ocean and the gift of connection to so many people around the world. I hope I can carry the love of Pura Vida around the world and hopefully inspire people.”

An immaculate run through the competition for eventual runner-up Manuel ended in dismay after taking down event threat and in-form rookie Gabriela Bryan (HAW) for their Semifinal duel. Manuel’s final effort, a 7.33, was enough to secure the heat win and take her into her seventh-career CT Final. Manuel came into the season as a WSL wildcard and now sits at No. 2 in the world.

“It was a tough end to my year coming so close,” said Manuel.”I’m very thankful to Jessi and everyone at WSL for giving me an opportunity to have a wildcard in this first half of the year. It really gave me motivation to prove to myself that I still wanted it and I’m here. I’m back.”

The men’s Final also featured a battle for the yellow jersey between wildcard Mamiya and CT veteran Igarashi that unfolded in historic fashion. Mamiya is the first men’s wildcard to win an event since 2008.

A slow start gave way to fireworks as Igarashi put pressure on the wildcard after a priority mistake by Mamiya, who recovered brilliantly with back-to-back scoring waves to accrue a 15.00 heat total and left his seasoned competitor in need of a near-perfect 9.50. But the local North Shore competitor wasn’t done yet and dropped the hammer on a major, two-turn combination to earn an 8.83 and leave Igarashi in need of two new waves with just two minutes remaining.

“I can’t believe it, I literally can’t believe it,” said Mamiya. “I thought Pipe was going to be the event I was going to do really well in. I’m so comfortable at Pipe and I wasn’t really super prepared for this event but in my mind I just had to adapt to whatever the conditions are and figure it out. It doesn’t even feel real. I want to thank all my friends and family, my mom and my dad sacrificed so much for me, and I want to thank Shaun Ward too. He’s been with me since day one, and he’s really helped me so much through a lot of tough times.”

“At the end of last year I was really bummed with my performance in 2021,” added Mamiya. “I didn’t make a heat on the QS and was coming off an injury. There were just a lot of things not going my way. I wasn’t even on Tour and got into Pipe through a wildcard and got another wildcard here so I’m just super stoked.”

Eventual runner-up Igarashi battled his way to the Final after matching with even threat Jack Robinson (AUS), 2019 Vans World Cup winner here at Sunset, in phenomenal fashion. The 24-year-old then had to overpower Ethan Ewing (AUS), who looked to be unstoppable in his event run, but Igarashi was able to score a near-perfect 9.03 (out of a possible 10) and left the Australian talent in need of an excellent score heading into the final minutes.

The current World No. 2 will now look for his second-career CT win heading into the MEO Portugal Pro after falling short to Mamiya’s Cinderella story.

“I’m actually really happy,” said Igarashi. “Coming to Hawaii for so many years now, growing up in Huntington Beach, this has always been the place where I’ve really needed to work. I’ve always had a lot of struggles and just with my surfing, and over the years I’ve had to really work on it. Now just coming here and seeing so many familiar faces, I have so many friends here now and it just means a lot because somewhere where I felt so uncomfortable before I’m able to feel a little bit more comfortable and get some scores, and get some results.”