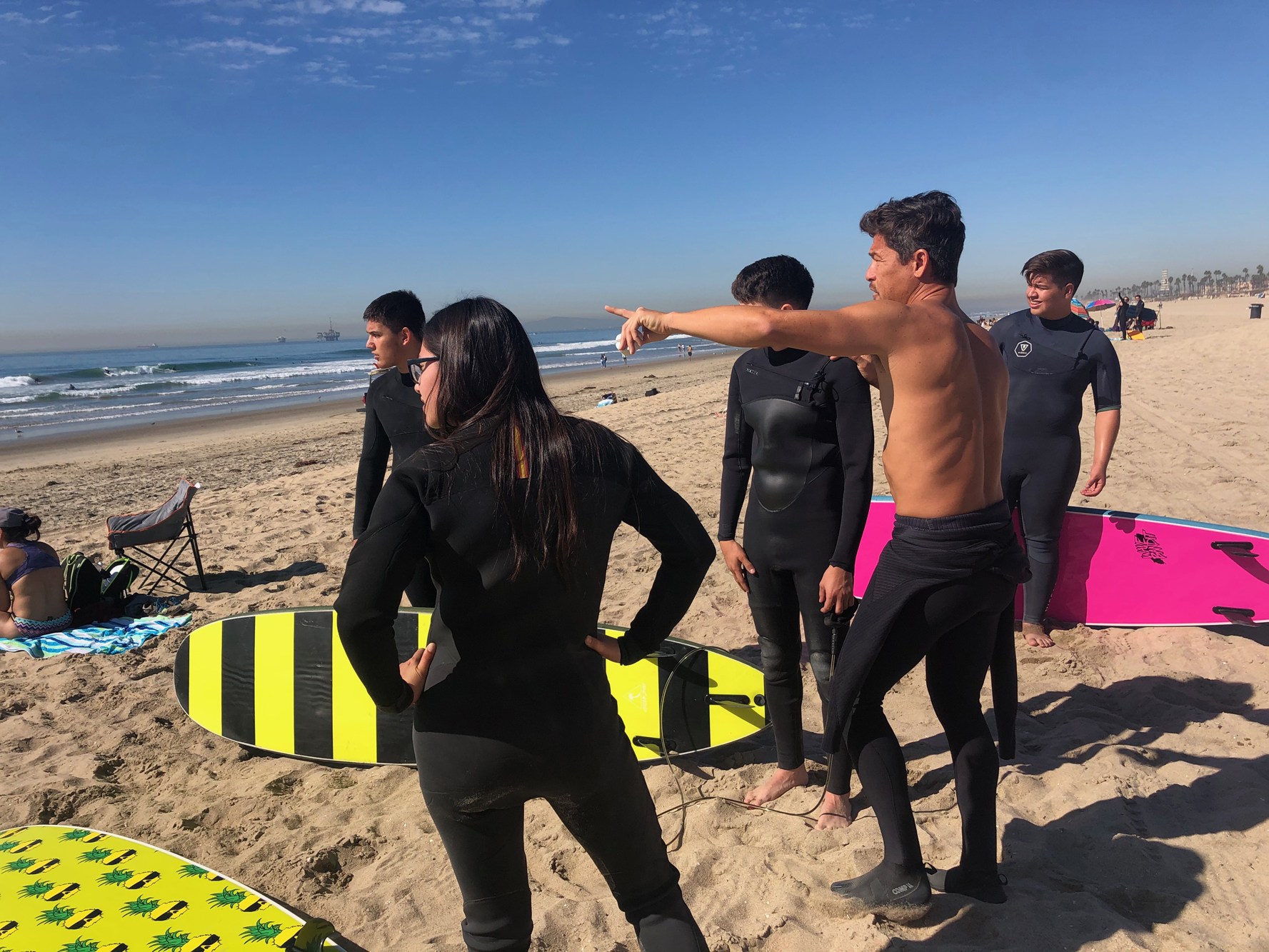 In the season finale of Dylan Graves’ epic web series, “Weird Waves”, we got our first glimpse of the Palm Springs Surf Club, a collab between Cheyne Magnusson, Kalani Robb, Tom Lochtefeld, Eric Muñoz and the rest of the Pono Partners team. Together they’ve been working day and night to transform the old Wet ’N Wild park into a future surf destination out in the desert.

The R&D opening happened surprisingly fast, considering the scope of the project and the fact it’ll be the first-ever public wavepool in California. So, how did they jump through so many hoops so quickly?

As odd as it may sound, according to Muñoz — the Chief Development Officer on the PSSC project — it was a landlocked High School filled with a handful of passionate surfers that ultimately helped the project gain so much positive attention the City practically laid out the red carpet for final approval. We gave Muñoz a call to learn more.

First off, give us a little of your background. We hear you helped California fight an invasive species of seaweed?

Yeah, I was in city planning in Carlsbad in the early 2000s, which I really enjoyed because of the environmental and community aspects of that job. Long story shot, what happened was, we realized we had an invasive species of seaweed in our Agua Hedionda lagoon that was released from an aquarium. I ended up writing a book about it, called Caulerpa Conquest: A Biological Eradication on the California Coast, which details not only how close the lagoon was to being lost, but also how the Caulerpa very nearly spread out into the ocean, where it would have infested other lagoons up and down the coast and become an environmental disaster. It was really cool to see Carlsbad come together as a community and defeat a marine invasive species, which is a rarity.

And what is your involvement with the Palm Springs Surf Club?

Kalani Robb, mind surfing one before paddling out for a session with the kids of the East Valley Boardriders Club.

Real quick: what’s the meaning behind the word Pono?

It’s a Hawaiian word that basically means “to do things correctly and with respect”, which is what we’re unified in. Our team is loaded up with surfers, and we’re proud of that. We’re not loaded up with corporate guys.

Back to your community and public affairs role. We hear you helped get government approval to build the pool by taking local kids from the desert on field trips to the coast to learn surfing, kind of as a grassroots way to say: “look at the positive impact surfing is having on these local kids, it’s not just about tourism”. Can you elaborate on how that unfolded?

Well yeah, sorta. But it really happened organically, and it wasn’t planned. Around this time last year we got connected with the surf club at the Desert Mirage High School — they call themselves the East Valley Boardriders Club. Anyway, at the time they had only just started up and had about 14 members. I went and spoke with their principal and kids and we all realized how good the timing was: They were just starting their club around the time we were starting our project, which is a mutually beneficial way to grow a surf community in the desert.

I knew it was important we get community support at the planning meetings, and the kids were stoked to participate. So, they came and spoke at our planning commission last October — about 7 of the kids showed up and three of them spoke. Honestly, we were not prepared for the emotional impact these kids had on us. They literally brought us to tears. We had to fight back crying because we didn’t want to openly weep in front of the planning commission like it was a show, because it wasn’t. They were just so honest and pure about surfing’s impact on their lives and the doors it was opening. One kid talked about surfing taught him patience, and another how surfing saved him from the streets.

These kids had only just started surfing, and they were explaining in the most raw and honest way how powerful it is. It forever touched our hearts. The kids ended up making the evening news and front page of the papers because they spoke. I think that just went to show: Who knows what having access to surfing will do to transform and enrich their lives, you know?

So now, we’re figuring out how to run surf PE by the time we’re open next year, and other schools in the area are welcome to line up behind them. And that’s what we’re all about. The magic of water is about to spread through the desert community. These kids are so freaked out with stoke. And that’s not some bulletin point in our marketing.

I wrote a piece called “The Aliens Have Landed” about wavepools, and my whole point is that surfers are like aliens, and throughout history we’ve transformed countries wherever we’ve landed: there’s a whole economic, social, and cultural transformation that can be very powerful with surfing, and now that we’re landing in places away from the ocean, the primal joy of surfing is being shared by people who never would have had that chance.

There’s been a lot of positive feedback from the final “Weird Waves” episode. In it, Cheyne Magnusson says: “We’re basically taking everything that was there, and making it bigger,” as it relates to the current pool. Can you elaborate on the timeline and plans between now and opening?

Epic. That’s great to hear. By design, we decided early on to work diligently on opening the park and dialing in the SurfLoch technology with Tom [Lochtefeld], and not overhyping ourselves with renderings. So, we’ve been quietly working with the city and now we can start to share what we’ve been working on.

That said, we’re gonna keep doing some testing in the current R&D phase, and then we’ll drain the pool, make it wider, make it longer, and then we’re gonna start building all the elements around the pool to work on opening around this time next year. We’re gonna keep it a family experience with some waterslides, a lazy river, and a restaurant, and the wave itself is not just going to be for the high performance pros; there’s gonna be an inner wave to learn to surf on. We want to cover the spectrum: We want people to be able to learn to surf, and then train for the Olympics. Ultimately that’s something we want to hold true. We are not trying to be elite or exclusive; we will be very inclusive, and we welcome everyone. We’re trying to instill hope, joy and sustainability into the human experience. Like I say in my book, “no ocean, no hope.” Now everyone can wake up to the magic of surfing, whether it’s inland or on the coast.