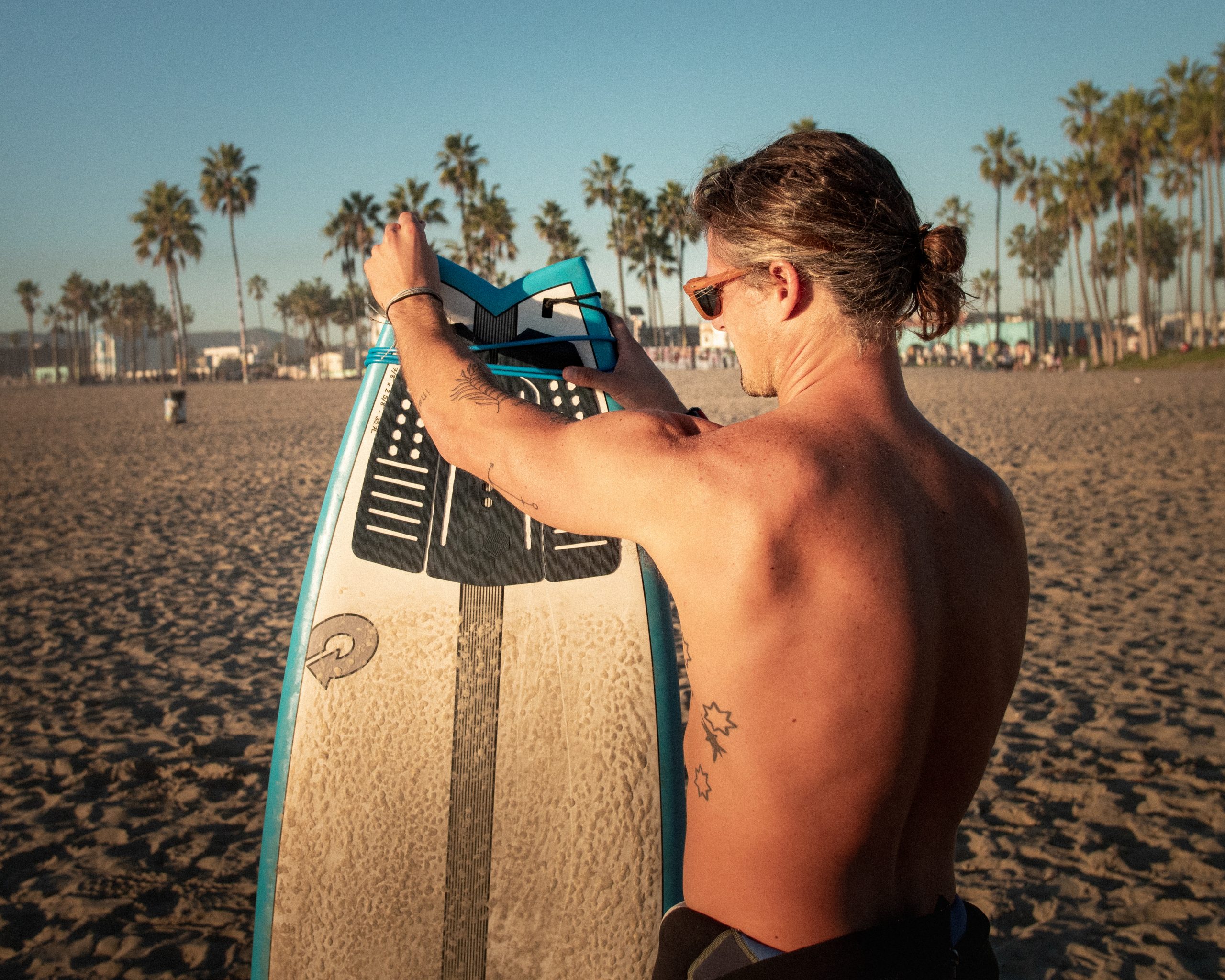 As a young kid growing up along the coast of Maine in the small town of Kennebunk, James Merrill discovered a love for nature by learning how to surf in not-so-welcoming conditions. At just 11 years old, Merrill would bundle up in as much rubber as he could, slog his board down to the beach and take advantage of any hurricane swell that made its way up the East Coast–often in near-freezing conditions. While frigid temps might have scared many pre-teens away from a life near the ocean, the rawness of the Northeast coastline gave young Merrill an appreciation for the natural world that would stay with him throughout his life, eventually leading him to become an environmental activist–and committing himself to fighting the world’s plastic problem.

Today, Merrill deals with much more fair-weather surf conditions while working and living in Venice Beach, where he focuses his energy on building Opolis–a sunglass company aiming to tackle the world’s plastic crisis by using plastic found in the environment as a primary material.

“Surfing is probably one of the biggest reasons I’m doing this,” Merrill told SURFER over the phone recently. “I can’t imagine not having that in my life anymore, and if we continue the way that we’re going, there’s going to be more plastic in the water than marine life and that will just be the saddest thing for all of us.”

Merrill’s path to being an eyewear changemaker wasn’t exactly what you’d expect–nor anything he expected either. After graduating college in upstate New York, Merrill moved to Washington DC where, through a friend of a friend, he stumbled into international development, eventually working abroad as a contractor for the U.S Agency For International Development (USAID). His first assignment was in Bangladesh, where he worked on agriculture value chains with local farmers. From there he went to Pakistan, and for five years was involved in programs addressing counter-violent extremism projects–a line of work that was far from being a safe, cushy desk job.

“During the wars and strife in the region, there was a lot of leftover violence that was very prevalent in the area that national and provincial governments needed support addressing,” explains Merrill. “This support, while dangerous at times, was what we were hired to do to ensure that people and communities most at risk for radicalization were given the tools to choose peace over violence. ”

After his work in the Middle East and South Asia was completed, he eventually was sent to wave-riddled places like the Philippines, Papua New Guinea, Indonesia, South Africa and Nigeria, where–in addition to sampling world-class waves–he was involved in supporting endangered species and biodiversity initiatives and water sanitation projects. It was in these areas that he got a first-hand look at how some coastal communities are being inundated with plastic pollution.

“It was so sad to see how western plastic is impacting these people,” remembers Merrill. “Not only from an environmental standpoint, but how it’s impacting their health, their hygiene, their water sanitation. The pollution in certain countries is a supply chain of misery and violence for a lot of these people. I told myself that if I was going to get out of [international development], that I would figure out not only how to help these communities, but how to better the environments they’re living in and help their local economies as well.”

And Merrill did just that. When he finally returned to the United States, he moved to Los Angeles to focus on building a transparent and honest supply chain that would support and produce sustainable products that would benefit coastal environments while simultaneously helping the communities he grew to know over the past decade. He came up with the idea to create eyewear from the used plastic bottles found on the beaches of these communities and upcycle them into a stylish, viable product. Merrill explains that while there are many brands out there making products out of ocean waste, Opolis trademarked blend takes water bottles from the ocean and turns each one into a pair of sunglasses, allowing the entire bottle to be reused.

Merrill first launched his company with a plant-based model constructed with bio-acetate, which is completely biodegradable (in fact, a pair of these sunnies will completely be absorbed in the soil of landfills within 115 days). But his hero product is the trademarked Stoked Plastic Collection.

The process of making Merrill’s forthcoming line of plastic-based sunglasses works like this: in places like Indonesia, Kenya and the Philippines, local community members collect found plastic and send them to a certified manufacturer within their same country. “Not only are we trying to clean up the environment in these communities, we’re trying to make sure the people that clean up these environments are paid for it,” explains Merrill. “Then along the way, they’re educated on what it means to have a clean river system, a clean ocean system, and clean beaches. And what that can mean for them as a community. I want to ensure that anyone or anything that touches our supply chain is impacted in a positive way.”

The plastic is then cleaned, heated, ground into pellets and then molded into the stylish frames that people actually want on their face. It’s a process, and a product, Merrill hopes will inspire creatives and changemakers across all types of industries, in order to truly make a dent in the plastic problem.

Merrill says the Stoked Plastic collection will be available for purchase at the beginning of 2022–and it’s something he’s poured his whole life savings into. But for Merrill, the investment is worth it.

“To date, we’ve collected over 300,000 water bottles off the coast of Bali–and that’s just for the limited amount of product we’re starting for our first product run,” says Merrill. “Our goal is to create competition in the marketplace to encourage a large volume of water bottles to be taken out of landfills and the ocean. Because it’s a durable product, you can apply this concept to so many different things. Then the true change happens.”