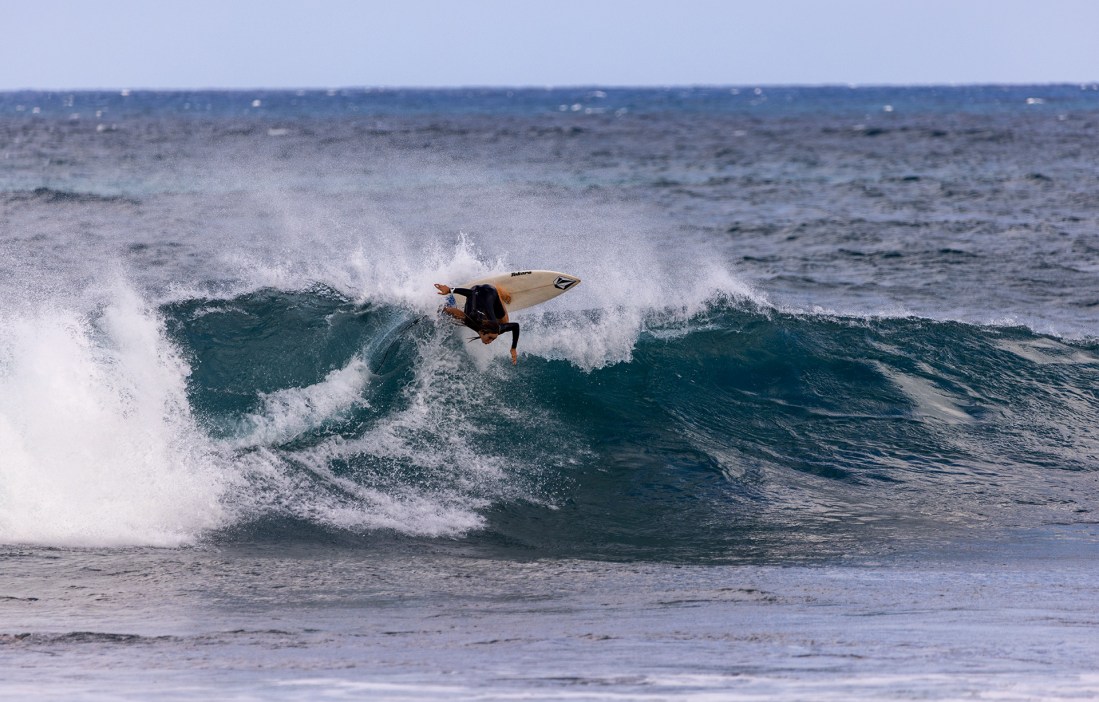 The North Shore of O‘ahu has bred a great pool of talented local surfers. Young surfers who are lucky enough to grow up in the epicenter of surfing have the advantage of progressing their power surfing, barrel riding and air game. One of the newest young talents coming out of the North Shore is 16 year old Nalu Deodato. Nalu has always had the mindset to step up his performance and become the best surfer he knows he can be. Just like his long hair, Nalu has style and flow. His love for the ocean is what keeps him going, not to only get better for competitions, but to have fun and enjoy what the sea has to offer. In Hawaiian, the word “Nalu,” translates to wave, so it is very fitting for this young man who spends most of his days chasing and riding waves. While sitting down with Nalu, we got to learn more about his introduction to surfing the North Shore, his competitive career, and all his travels.

When and where did you first learn how to surf?
I first learned how to surf at Ali‘i beach park, on the inside of Halei’wa. My dad (Rama) surfed from a young age, so he taught me. Honestly didn’t really like it at first. I was a little bit scared, but as I started surfing more and doing it with all of my friends, it just became something that I loved.

So at what point did you start surfing waves of a little more consequence?
When I was maybe around 11 years old, I started Surfing Vland a lot. It’s a bit of a heavy wave but it’s also a wave that a lot of kids go to learn how to first get barrelled and that was the spot where I really started putting in a lot of time in my surfing and I started getting some good waves. Then I started surfing Rockies more. I was kind of always scared of that because of the reef, but once I started surfing it, it became like one of my favorite spots.

How was it like surfing waves like Sunset and Pipeline?
Sunset was definitely the scariest wave with all the water moving everywhere and super long hold downs. The first time I went out there I was pretty scared, sitting on the inside bowl just catching the corners, but as I started going out there more and more it became another favorite wave. It’s still super hard to surf, but as I get bigger and grow, it’s become easier to ride. That inside bowl always has a couple nuts barrels on it and I got a couple of the sickest barrels in my life, just completely spit out.

And at 13 or 14 is when I went out to Pipeline on real 6-8’ days. From there I just kept putting in my time. Last winter was the first winter that I really felt comfortable going on some of the bigger waves. It’s definitely one of the scariest feelings, but getting barrelled out there is also my favorite feeling in surfing for sure. Seeing this blue room, being inside and coming out, it’s definitely the best feeling. I’m hoping to do it again this winter. Going into this winter I have much more confidence. You just gotta put your head down and go.

Let’s talk about your competitive career. How did you first start out and how is it like competing today?
My first actual surf contest that I ever did was at the Menehune contest at Halei’wa in the Kokua division. All the parents would be pushing in all the little kids. After that I started moving on to the Duke’s OceanFest and Rell Sunn, a younger amateur contest that would only go up to like age 12. I started doing a lot of those with all my friends and once I started winning, I really got the drive to wanna become a competitive surfer.

I remember when I won the Rell Sunn at Mākaha, I’d say it was a glassy morning, sun was out and 1-2 feet. When we are a kind smaller kid, those waves are actually fun. We could just fit better and just do better surfing in those kinds of waves. I was competing against one of my friends, Kani Delroy and Nakoa and it was a fun time. It was a good win and I was really proud of that one for sure.

So now I’m still doing all the amateur NSSA, HSA events, and all the regional ones over here. I just started doing the regional QS events and then hopefully try to do good in those and then make it onto the Challenger series soon.

So you are mainly sponsored by Volcom. How did you get picked up by them?
Uncle Jason Shibata got me on the team. I was coming in from a surf at Pipe and as I was walking up the trail, Uncle Jason came up to me and he gave me some Volcom stickers and I was just in disbelief. Volcom was always one of my favorite companies growing up. It was definitely a surreal moment.

Where are some international breaks you’ve surfed?
I’ve been to Indonesia. I went there four times when I was younger. We recently went back this last September with my dad and some friends. It was the coolest trip of my life, traveling to all the waves I’ve only seen in surf movies and posters. And there was no crowd, just perfect waves left and right, super sick, all to ourselves. At the end of our trip we went to a spot called Desert Point and that was like the one wave in the whole world that I always wanted to visit. When we finally went there, we timed it well with a good swell. It’s nothing like we have here in Hawai’i. It is a shallow reef but it’s a left that moves along the reef all the way through and then it closes out all the way down. You can get like five barrels on one wave and get barrelled for 20 seconds. So it’s a crazy wave for sure.

Have you been to a Wave Pool and what do you think about Wave Pool Technology?
I actually went to a wave pool for the first time this summer. When we went to visit my great- grandparents in Japan, we got a chance to surf the pool there, the Shizunami Surf stadium. The wave is super good for practicing small wave contests. Like if you had one of those at your house, you’d be really good at surfing small waves. But it’s definitely a little challenging and you have to be super light on your feet, having the right boards. But they have a bunch of different variations, like the barrel and air section. The Stadium was super sick, super exciting, definitely a cool experience. I would like to go to Waco to work on my airs. Like a lot of my friends have gone there and that’s a place where you can really progress on your air game. Wave Pools are definitely helping the air game progress to a different level because people are just doing the craziest stuff nowadays, like finger flips, all crazy different grabs, back flips, all of that. So yeah, it’s definitely a huge help to the air progression and surfing overall.

What are other spots you haven’t gone to yet and really want to surf?
I want to go back to Indo and surf this other wave called Super Sucks. I think it’s probably one of the best waves in all of Indonesia. It’s pretty much like a perfect left point break that drains all the way through. It’s kind of like Desert point, but a little bit less gnarly. The wave is not playful at all but it’s a little bit easier than that. I would say it’s pretty much a perfect wave. I also want to go to Australia and surf Snapper Rocks and Kirra. That also looks like one of the best waves in the world too.

Do you have a magic board right now? A board that you cannot lose?
I do have one magic board. I have this one 6’0” from Wade Tokoro. He always makes me the best boards. I rode it all throughout the summer and I buckled it when I was in Indo. But then I fixed it and it’s a board I wanna keep on ice. It’s such a good board. I love taking it to Halei’wa or smaller Sunset, those are the two places I like riding it a lot.

What board do you like to ride for Pipeline?
Last year I rode a little bit of small boards for Pipe, like some 6’2”s. That was the biggest board I rode. So this year I’m getting a little bit bigger boards, like to sit out at the second reef, try to roll in on a 6’8” and a 6’10”.

Does style matter?
I think style definitely means something to me. I’m always trying to work on my style, especially in barrel riding. I love certain guys like Bruce Irons. I think Bruce has the best backside barrel riding style in the world. It’s still good to put your own kind of style into your own surfing but watching some of the best surfers in the world, it’s like you always try to be a little like them, doing certain things they do that you like from their surfing. I also like Ethan Ewing and Griffin Colapinto. They’re two of my favorite surfers in the world and I think they have two of the best styles. And a guy on the Volcom team, Balaram Stack, I love his style. He just surfs super freeform, doing whatever the wave asks and just performs.

Would you say that surfing is an artform?
Yeah, I definitely think that surfing is art. You’re catching your own waves and you can literally paint any kind of picture you want. You can just do turns, airs, pull in, roundhouse, blow tail, anything you want.

Besides Surfing, do you have any other hobbies or activities you like to do?
About three years ago, I started getting really into spearfishing. That’s become like one of my favorite activities to do in the summer. Being able to harvest your own food from the ocean, it’s super cool and fun. I like going with my friends Rivan and Maddix,they are the ones who got me into it. We’ve caught all kinds of fish: parrotfish, goatfish, and Ulua. And the cool thing is you can pick whatever you want. As you start out you’re shooting a little bit lower caliber fish, you’re shooting whatever you can. And then as you get better and better, you can choose exactly what you want to fish. So it’s super cool.

Anyone you would like to thank?
Shout out to all my sponsors, Volcom, Tokoro, Creatures, SunBum, Third Stone, Futures, Matunas. Thank you guys for everything. Huge thank you to Uncle Wade Tokoro Surfboards, always making me the best boards for any kind of conditions. Uncle Dave Riddle for coming to all my contests, coaching me, helping me out, just giving me super good advice. Thank you to my mom and dad for supporting my journey thus far and hopefully keep it going.