Jess Leedy SUP Surfs Puerto Escondido, Mexico: Get Along with It All. 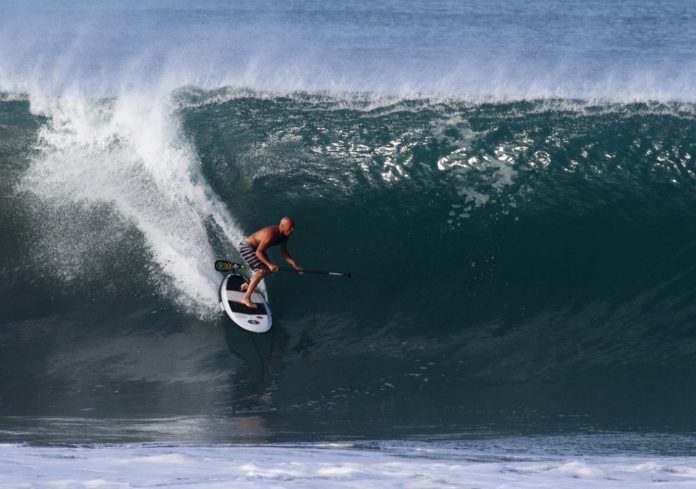 He comes to town with the weather on a tumbleweed carrying two thick SUP boards for when one breaks. And he leaves with a ring on his finger. 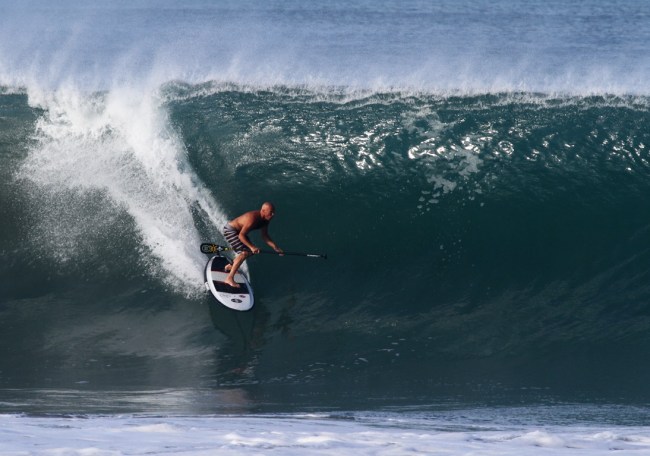 The Fear of Death:  Puerto Escondido

When was the last time you felt like you were dying? Or real close? Do you remember?

Less people die than I would ever think.  Which is important to those victims and their families. But the fear of death? That happens every day in Puerto Escondido.

On the Flip Side:  Every day someone gets the wave of their life. Everyday.

The glory you achieve at Puerto is equally measured by the risks you’ve taken, the fear you’ve confronted and in many cases, the agony you’ve endured.

When was the last time you felt the fear of death? 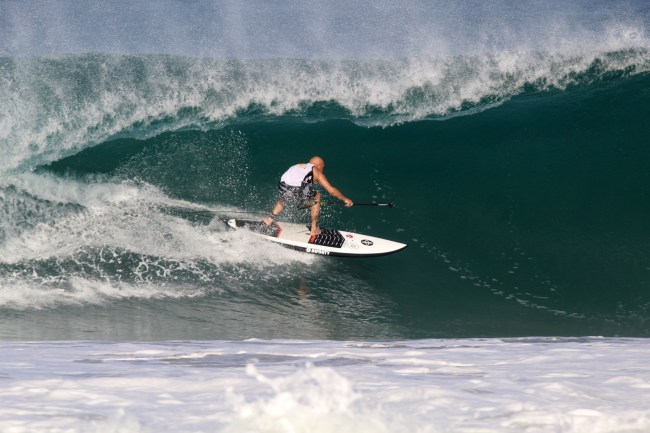 Walking along Playa Zicatela to meet Jess I saw two different surfers get demolished by the lip. The first one got hit on the shoulder which just about ripped his head off. The second guy got chopped at the knees. Brutal.

The thing about the lip (apart from the blunt force trauma) is that many times the board remains in your line of descent. You fall and it comes spinning around towards you with the rest of the wave.

The whole thing still gives me the shivers (a neurological PTSD reflex from my own time under water in Puerto).

Jess was on a video call when I got to the table. He introduced me to Shilo, who has no loose teeth to report and shares a liking for bacon with her father. Jess answers a question for me without my asking. He manages his relationship with his daughter by being present with a video call.

He asks her:  “Whaddayou doin?”

“I’m on my way to Grandmom’s house. Whaddayou doin?”

“Eating breakfast,” he said. “Check out my bacon.” 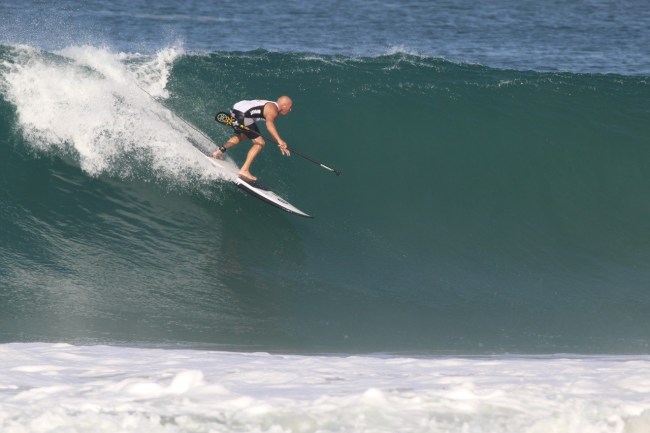 Playa Zicatela:  One of the Heaviest Waves in the World

Jess is in his early fifties and has been coming to surf Puerto Escondido since the late 80’s and every year or so for the last twenty.

“Tell me about your wipeout,” I ask.

“I thought I was gonna die.”

Playa Zicatela has that effect on everyone. Ask any surfer whose surfed here. See if you can find someone who wasn’t fearing for his or her life in the water at Playa Zicatela. It’s one of the 10 Heaviest Waves in the World.

The first time I spoke with Red Bull and Fugi photographer Agustin Muñoz he said, “Puerto man, ha ha, when I say I’ve swam and shot all over the world, I’m not bragging… it’s just a fact.  And Puerto is the only place I thought I was going to (expletive) drown.”

Below is the wave that got Mr. Leedy. 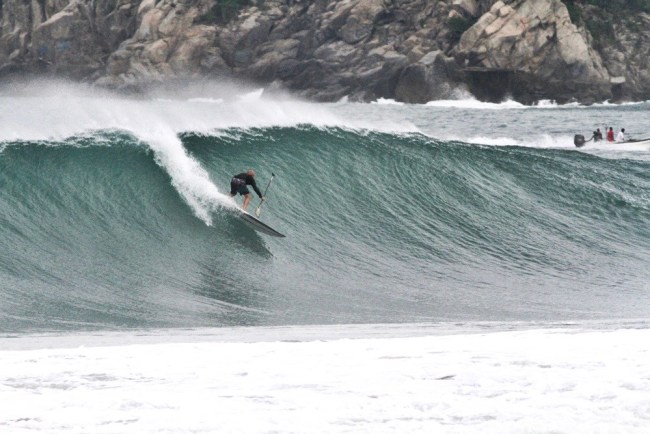 Jess isn’t prone to hyperbole after years of wipeouts in heavy surf. I’ve seen him on loads high risk waves.

Why was this one different?

“I’ve never breathed in water before,” he said.

He pushes his chair back from the table so he can physically describe what happened.

“The lip knocked me off my board. And then the board came around and hit me in the stomach and knocked all the wind out of me.”

Searching for a comparison of board-hitting-body I said, “That’d be like if you let me hit you as hard as I can with your board.”

But we both know that’s not enough. I could hit Jess with four inch carbon board as hard as I can and he’d go on eating his bacon.

“OK,” I try again. “It’d be like if I got the board fixed to a pickup and came passing really fast and hit you with it.”  We both agree that’d be close. Except, in my scenerio he wouldn’t be underwater afterwards and have to hold his breathe.

“So when I came up, I got one short foamy gasp and the lip was right in front of me… I mean right there.  Boom!”  He raises his arm but doesn’t extend it when he says, “Right there” and I could see the wave and feel the boom (if only for just for a moment). That utter explosion of violence that cares nothing for you.

“And I didn’t panic, but I was down there for two waves and at one point it was just a reflex and I sucked in water.”  That’s when he thought life might suddenly be real short.

“If I didn’t have a leash… whew…  I climbed up the leash, grabbed my board and started throwing up salt water.” 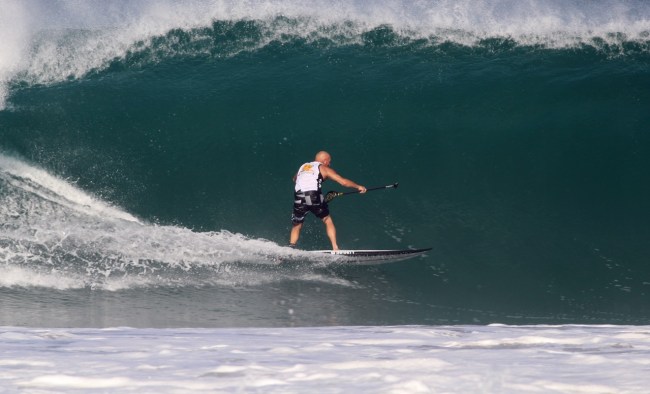 We were on my porch a bit later and Jess had a guitar in hand singing some original songs in English and Spanish.  He’s a sax player but moves through instruments in the language of music. His wife just got him a banjo and his Dad plays in a Bluegrass Band.

We listened to Clay Pigeons by Blaze Foley and Jess said, “Play that one again.”  And he searched the cords on his iPhone and was playing with Blaze by the end of the song.

And then he played it again himself and sang it. 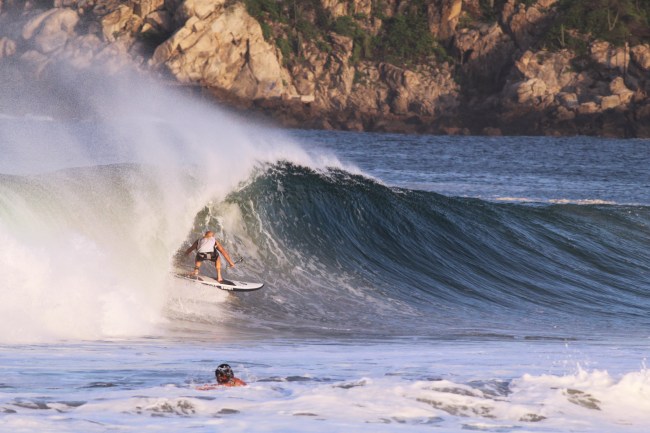 Here’s a line from the song:

“Trying to hide my sorrow from the people I meet and get along with it all.”

For the music of the talented Mr. Jess Davis Leedy check out his Apple Music Page.

He’s got an album coming out real soon.

For a daily look at Puerto Escondido check out:  Photographer Westside @migueldiaqz.westside.